GREENSBORO — Republican Guilford County Commissioner Alan Branson, who lost his race against Democratic challenger Mary Beth Murphy by 72 votes, has conceded the race that he contested for several weeks after the Nov. 3 election.

Branson called Murphy shortly before he released a written statement at 1:30 Tuesday afternoon.

"We chatted briefly and I thanked him for taking the time to reach out to me personally. That meant a lot to me," Murphy said. "We wished each other well and happy holidays. He wished me the best of luck in this new role."

"Given the time constraints and burden of pursuing a stay in the Wake County Superior Court, I find it time to concede," he said in the written statement.

Branson said in an interview that he had to weigh the cost of pursuing legal challenges against the limits of serving as a Republican commissioner on a Democrat-dominated board. Democrats assumed a 6-3 majority after the Nov. 3 election. With Branson's concession, that number expands to a 7-2 majority.

Murphy said it was good news to get just before the holidays and that the entire process was eye-opening. She said she believes the integrity of the voting process was assured by the work that Guilford County Elections Director Charlie Collicutt and his staff did during this close election.

"The work that they do is often thankless and behind closed doors and having an inside view to that work has really been incredible," she said. "And I am so impressed by the work that Charlie and his staff do — I had no idea about all of the work that happens behind the scenes."

Branson, who was able to serve for two weeks after other new members were sworn in, found plenty of reasons to disagree with the Democratic majority on the Board of Commissioners.

He did not support the action taken by the commissioners Thursday to accept the resignation of long-time County Manager Marty Lawing. The board voted 6-3 along party lines to accept Lawing's resignation.

"What they did last week to our Manager Marty Lawing was extremely poor leadership, especially over the holidays," Branson said.

It's unclear at this time when Murphy will be sworn in to the office. She and Interim County Manager Robin Keller had missed each other's calls during the afternoon. The next regularly-scheduled meeting of the Board of Commissioners is 5:30 p.m. Jan. 7.

Murphy was elected in a Democratic sweep of the board that had been dominated by Republicans for eight years.

Two Republicans, Commissioners Chairman Jeff Phillips and Commissioner Hank Henning, decided not to seek reelection and their seats were won by Democrats.

Murphy was ahead by 18 votes on election night until a full canvass including absentee ballots showed that her lead had grown to 72 votes and that total became official.

An eighth grade social studies teacher at Western Guilford Middle School, Murphy said that her top priority is to join the commissioners' aggressive approach to mitigating the impact of the COVID-19 pandemic on Guilford County and helping local agencies deploy the vaccine when it becomes available.

The commissioners on Thursday approved $26 million in spending toward pandemic relief, including rental and housing assistance, the county vaccination program, immediate school needs and money for pandemic regulation enforcement.

She plans to create a "Community Cabinet" of residents, business owners and community leaders in District 4 to regularly meet and talk about the district's issues, Murphy said, "to really be intentional about seeking input to drive the decisions that I’ll be making as a representative of this community."

A two-term member of the board, Branson had served a term as chairman during his tenure.

A one-page statement Branson released Tuesday outlined his ongoing objections to the way the election was conducted.

After the votes were tallied, Branson demanded a full recount. After that, he appealed the results to the county Board of Elections, objecting to how absentee ballots were handled. When that was rejected by the board, Branson sent his appeal to the N.C. Board of Elections, which dismissed the objection Friday without hearing it.

Branson said in his statement that absentee ballots amounted to a "cheating opportunity" for Democrats during the pandemic.

"I only lost during the Mail-In Absentee Ballots," Branson wrote. Of the 21,655 votes he received, Branson wrote, "it is amazing that we received that many votes in our district. I do feel that we need to have Photo ID to be shown when voting."

Branson said in the interview that he is not sure what he will do next in politics.

He works for his family's trucking company, Stout Trucking Co., and that and his family keep him plenty busy, the 54-year-old Branson said.

But he said he will be watching the U.S. Census results and how they affect political redistricting in the months ahead. And he'll be helping Republican U.S. Rep. Mark Walker in his bid to become North Carolina's next U.S. senator.

He said people who write and pass laws often don't understand what it's like to run a small business.

"That’s a niche that I’m familiar with," he said. "If I decide to use it going forward maybe we'll take another stab" at political office.

Richard Barron: Stories from 2020 that reflect Greensboro's struggles and triumphs

City government touches every aspect of our lives, from trash collection to civil rights, and these stories span a wide range of subjects.

At 10 years, civil rights museum is proud of where it is, believes expansion is a must

The impact — and the challenges — of running the International Civil Rights Center & Museum are many, and that was before the pandemic.

'This is a blessing,' one woman says of program housing the homeless in hotels amid pandemic

Some homeless people were housed in hotel rooms during the state-ordered lockdown, thanks to the city of Greensboro and several organizations.

Carrying the load: As Greensboro residents stuck at home pile up trash, these crews are unsung heroes

Imbalance of power: Greensboro has more minorities than whites. So why aren't more of them on city boards?

With less than 50% of its residents classified as white, Greensboro still lacks substantial minority representation on many of its boards.

'This is what we support': Nearly 41 years later, city apologizes for Greensboro Massacre

More than 40 years after the Greensboro massacre, the City Council formally apologized in a resolution and created high school scholarships.

Murphy beat incumbent Commissioner Alan Branson by what ended up being 72 votes during the Nov. 3 election. However, Branson challenged the results up until last week, when he conceded.

State dismisses Commissioner Alan Branson's appeal to Board of Elections

Branson, who has represented District 4 since 2012, is challenging the legitimacy of witness signatures on more than 450 absentee ballots. Branson said Friday he will contact his attorney to decide whether to take his appeal to a court for further action.

The District 4 commissioner is lagging in the vote totals by 72 votes to Democratic challenger Mary Beth Murphy.

Republican Commissioner Alan Branson remained on the board, his seat hanging in the balance while awaiting his election challenge.

The results for the race cannot be certified until the protest is resolved, Elections Director Charlie Collicutt said Friday in a statement.

As in his earlier challenge, Branson said he is appealing the Guilford County Board of Elections' decisions on 464 absentee ballots from across the county. He said he is now aware 80 of those ballots were cast in District 4. 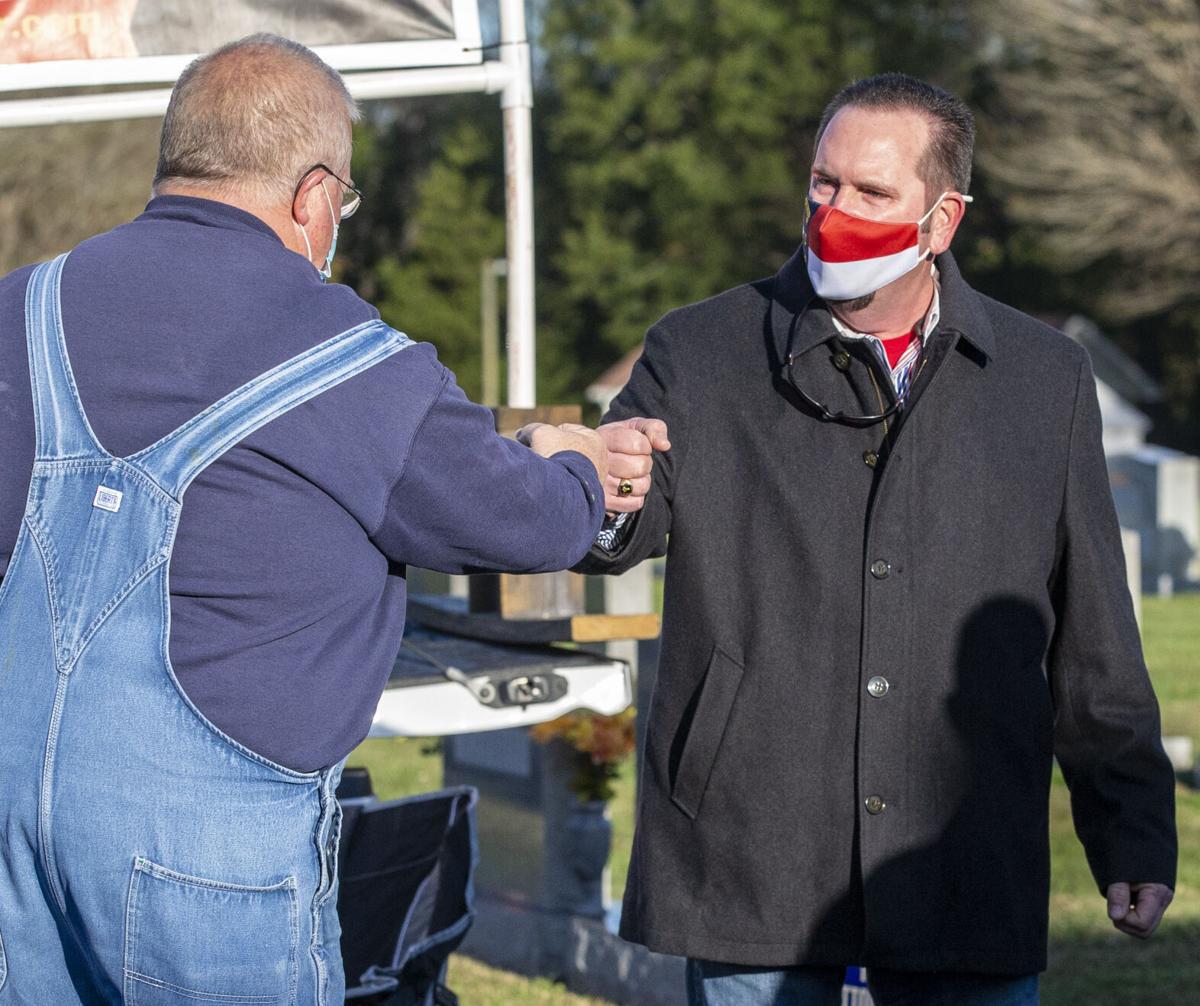 Commissioner Alan Branson talks with Scott Strader outside the McLeansville Baptist Church at 5205 Frieden Church Road in McLeansville on Nov. 3. 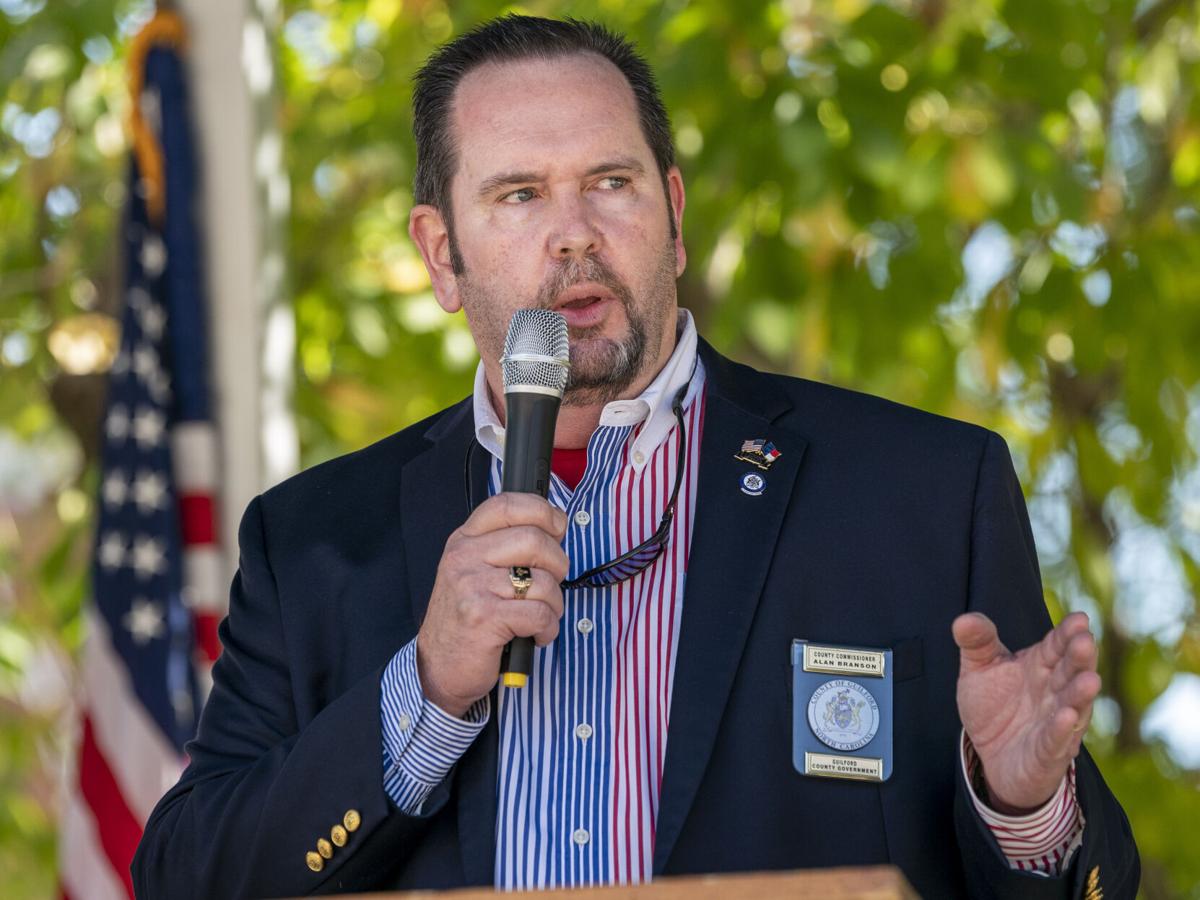 Guilford County Commissioner Alan Branson at the "Back the Blue" rally at Phill G. McDonald Plaza in Greensboro, N.C., on Saturday, October 24, 2020.