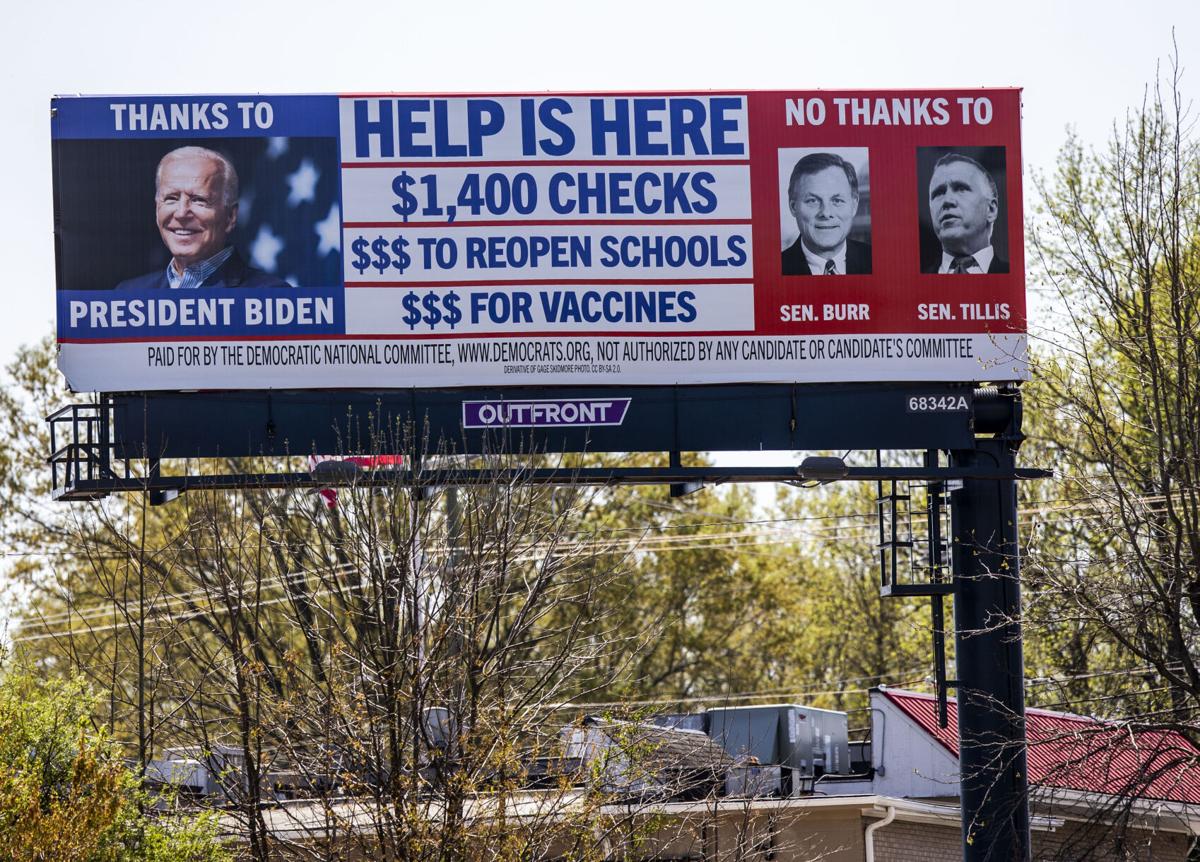 This billboard at the U.S. 421 and N.C. 66 interchange in Kernersville is part of the Democratic National Committee’s plan to promote the American Recovery Plan. 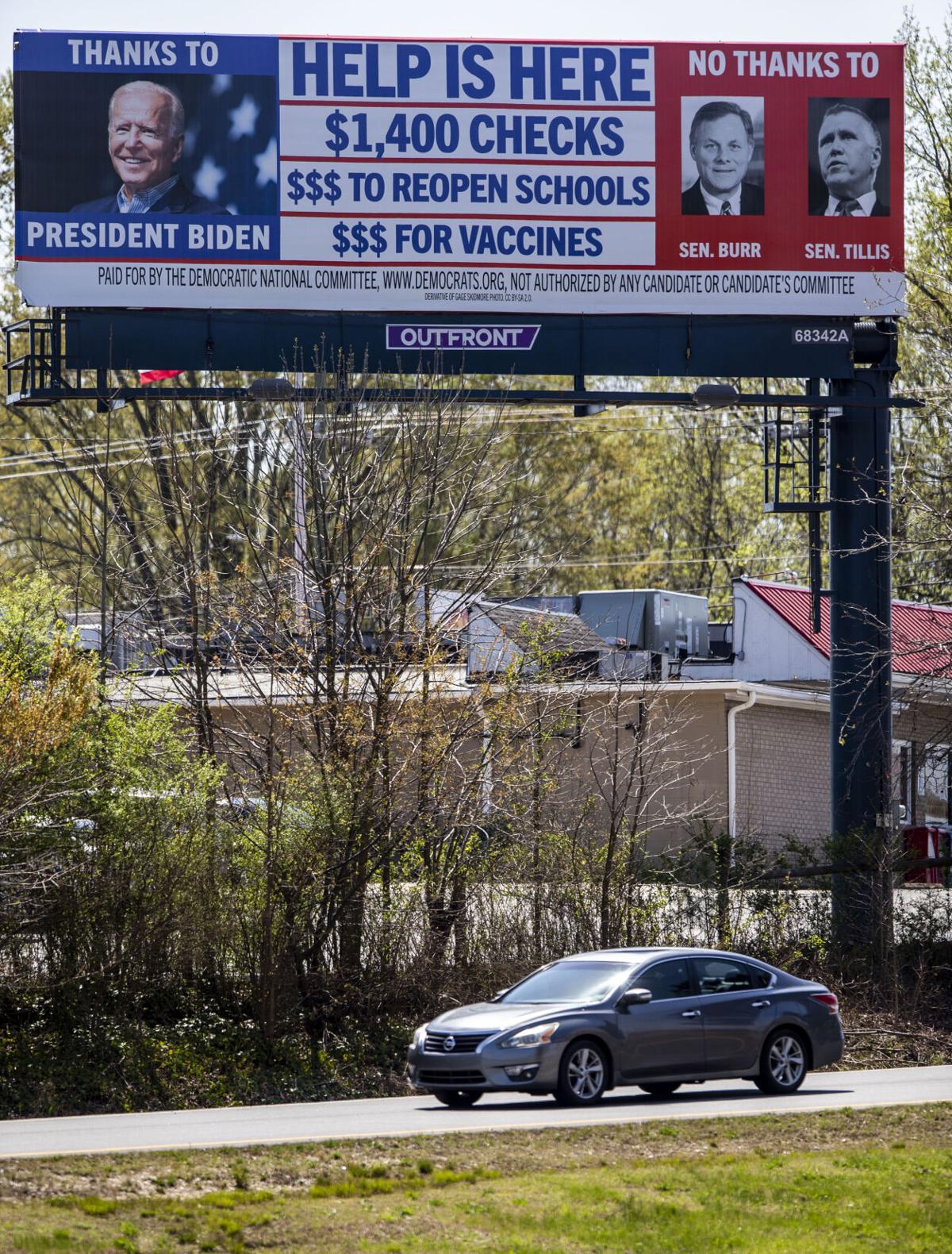 This billboard at the U.S. 421 and N.C. 66 interchange in Kernersville is part of the Democratic National Committee's plan to promote the American Recovery Plan.

KERNERSVILLE — The Democratic National Committee unveiled a billboard this week near N.C. 66 in Kernersville that touts the president’s American Recovery Plan while criticizing the state’s Republican senators who voted against it.

“HELP IS HERE,” the billboard reads. On the left is a photo of the president with the text, “Thanks to President Biden.” On the right are photos of U.S. Sens. Richard Burr and Thom Tillis, both Republicans who voted against the president’s relief package, with the text: “No thanks to Sen. Burr, Sen. Tillis.”

National Democratic officials say they bought the billboards in 20 states to promote the $1.9 trillion stimulus plan’s $1,400 relief checks, “$$$ to reopen schools” and “$$$ for vaccines.”

At 60 mph on westbound U.S. 421/Salem Parkway, motorists have to glance left quickly to see the billboard.

Its timing is already raising the ire of a Tillis spokesman because this is the week that the senator is undergoing surgery for prostate cancer.

“The return to civility that President Biden called for is clearly not being practiced by his own party,” Tillis spokesman Daniel Keylin told the News & Record in an email. “Last week, the (North Carolina Democratic Party) sent well wishes after Senator Tillis announced his cancer diagnosis and that he is undergoing treatment this week. Astonishingly, the NCDP subsequently decided that now was also the appropriate time to launch a political attack ad against the senator and gloat about their ad to the media.

“The NCDP’s pathetic partisan behavior is part of a larger problem in politics where some are incapable of showing basic human decency for even just a few days if it interferes with their desire to score cheap political points,” Keylin wrote.

Billboards in other states also thank Democratic senators who voted in favor of the package.

“The DNC chose this high-traffic area ... in the hopes that many North Carolinians see this billboard and know that the American Rescue Plan passed, thanks to President Biden and no thanks to Republicans,” the committee said in a written statement.

MSNBC Anchor Rachel Maddow featured the billboards, including the one in the Triad, on her show Monday and called it “the Democrats taking a victory lap.”

Burr’s office did not respond to a request for comment.

Road to nowhere: Guilford has a demand for patrol cars, but no supply

Snarled supply-chain issues and snags in microchip production are behind the vehicle shortages, which are affecting consumers and cops alike.

Jamestown voters will settle primary for mayor's race on Tuesday

The crews will assist nine county EMS systems in North Carolina "that are experiencing greatly increased calls for service during the COVID-19 pandemic," according to the release.

Retail center proposed on Wendover, across from Palladium shopping center

Bunker Land Group of Charlotte has applied to rezone 26 acres at West Wendover Avenue and Penny Road, across from the Palladium shopping center, for a proposed 160,000-square-foot commercial development and 180 multifamily residential units, according to the city.

Incumbent Lynn Montgomery and challenger Robert Frederick triumphed in the Jamestown mayoral primary on Tuesday, earning a chance to face off against each other in the Nov. 2 general election.

This billboard at the U.S. 421 and N.C. 66 interchange in Kernersville is part of the Democratic National Committee’s plan to promote the American Recovery Plan.

This billboard at the U.S. 421 and N.C. 66 interchange in Kernersville is part of the Democratic National Committee's plan to promote the American Recovery Plan.