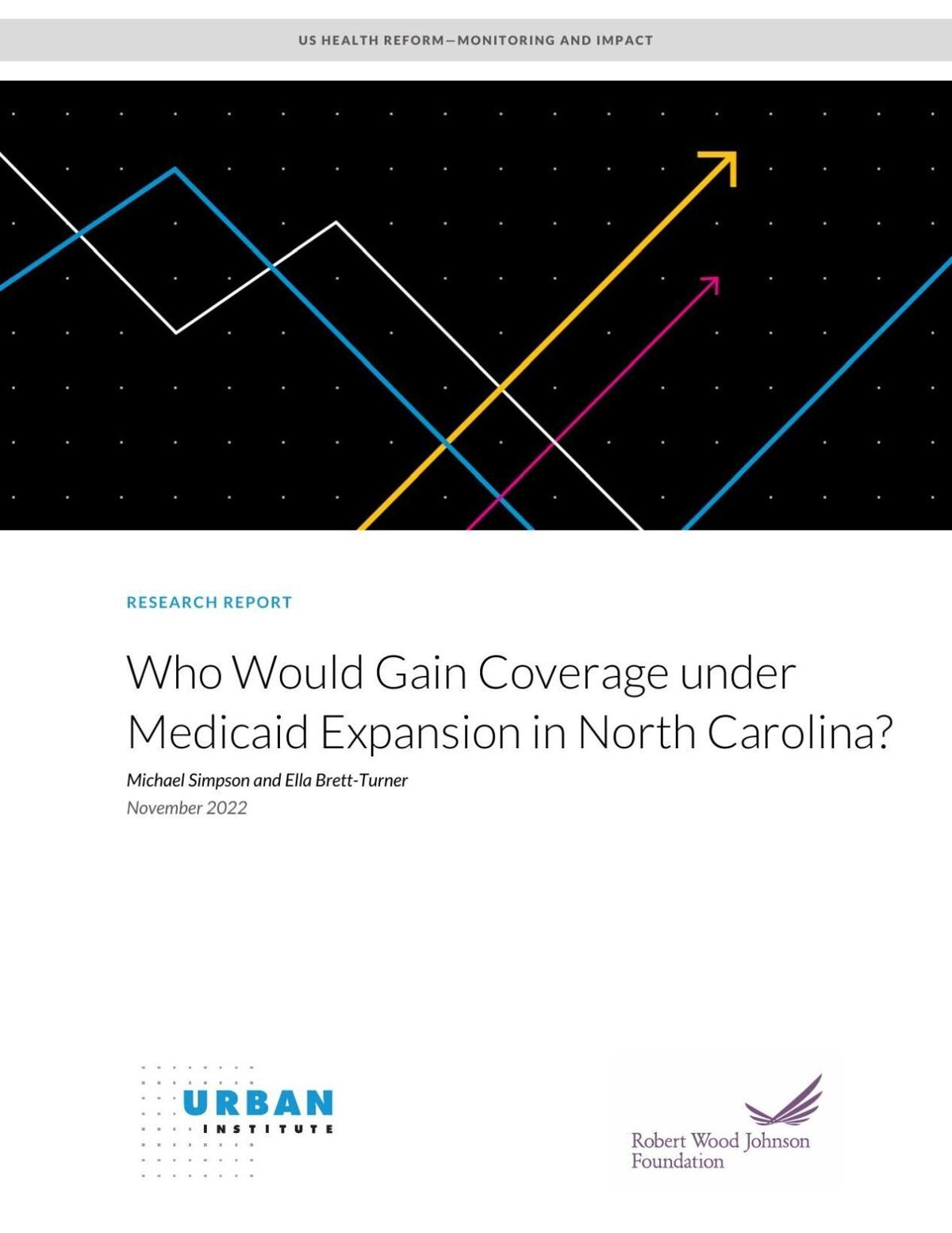 Another national public-health nonprofit has weighed in on the Medicaid expansion issue in North Carolina with the Urban Institute estimating at least 346,000 potential beneficiaries if it occurred in 2023.

The institute’s report was commissioned by the Robert Wood Johnson Foundation.

North Carolina is one of just 12 non-expansion states, all with Republican-controlled legislatures. A separate report was conducted for non-expansion Georgia.

The report comes after Senate leader Phil Berger, an Eden Republican, said on Nov. 9 that the legislative debate on Medicaid expansion would not continue in 2022, which forces between 450,000 and 650,000 potential beneficiaries to wait another year for action.

“This single policy change would have a profound effect on hundreds of thousands of people in these two states,” said Katherine Hempstead, the foundation’s senior policy adviser.

Medicaid currently covers 2.71 million North Carolinians, according to the N.C. Department of Health and Human Services.

States can expand Medicaid eligibility to nonelderly people with incomes up to 138% of the federal poverty level under the federal Affordable Care Act.

Those who might be eligible under the expanded program are between the ages of 18 and 64 and earn too much to qualify for Medicaid coverage, but not enough to buy coverage on the private insurance marketplace.

For Greensboro-High Point, the uninsurance rate with expansion would be the lowest in North Carolina at 7.4%. It would be slightly higher in the Winston-Salem area at 7.6%, but that would be much lower than the current rate of 11.6% there, according to the report.

“Increasing coverage through Medicaid expansion would have significant benefits for North Carolina, moving the state with the ninth highest uninsurance rate in the nation to the 24th highest,” said Michael Simpson, principal research associate at the Urban Institute.

“In Winston-Salem, Greensboro and three rural areas of North Carolina, around one-third of people without health insurance would gain coverage.”

The report does not factor in about 589,000 North Carolinians who have gained Medicaid coverage during the COVID-19 pandemic through federal public-health relief legislation.

According to the Kaiser Family Foundation, a national nonprofit health care advocacy group, Congress enacted the Families First Coronavirus Response Act soon after the pandemic erupted in the U.S. in mid-March 2020.

Part of the act is a requirement that Medicaid programs keep people continuously enrolled through the end of the month in which the COVID-19 public health emergency ends, in exchange for enhanced federal funding.

That has been the pathway where many of the additional Medicaid beneficiaries in N.C. gained coverage during the pandemic

The latest expectation is that the Biden administration will set a Jan. 11 end date after several extensions, but there is speculation that the end date could be extended to April.

The report determined that the uninsured population in the Winston-Salem area is somewhat older compared with the statewide total.

Also, about 59% of the non-elderly adult uninsured population in the Winston-Salem area has no more than a high school education, compared with 54% statewide.

In July 2021, Care4Carolina, an advocacy group pushing for Medicaid expansion, released a report with similar numbers for the Triad.

However, the state is not any closer to passing expansion.

When asked about a proposed special December session on Medicaid expansion, Berger said after last week’s election, “I think we’ll deal with that next year.”

Berger’s comments served as confirmation that even though the House and Senate passed in June a bill representing their version of Medicaid expansion, talks over the past five months have not yielded a compromise ready for a floor vote.

Rep. Tim Moore recently told the News & Observer of Raleigh that legislative leaders are “close on some things, other things we’re not,” and would come back in 2023 for a “more comprehensive discussion.”

The new board re-elected Melvin "Skip" Alston as chairman and J. Carlvena Foster as vice chairwoman for the coming year.

What's in a name? A lot when it comes to describing people without a place to call home.

The Guilford County Homelessness Taskforce considers the terms it elects to use, including its name.

The first show will be available on WFMY-Channel 2's streaming site on Thursday, according to Jim Longworth, who started the show in 2002 as a locally produced, weekly public affairs program.

Greensboro Urban Ministry and the Interactive Resource Center will lead much of the city's efforts to keep people off the streets this winter.

Tom Brady and Stephen Curry under investigation after FTX collapse