An overhead look at the former American Hebrew Academy

GREENSBORO — The federal government will pay American Hebrew Academy Inc. $49.8 million to lease its 100-acre campus to house immigrant children while they await reunification with family members or sponsors in the United States.

The five-year lease is for the former school at 103 Daat Way, near Hobbs and Jefferson roads, according to usaspending.gov, a website set up under the Federal Funding Accountability and Transparency Act of 2006. The lease started June 9 and runs through July 8, 2027.

The U.S. Office of Refugee Resettlement, part of the U.S. Department of Health and Human Services, announced June 10 that it would lease the school grounds to house the children. The children were expected to begin arriving this month.

The American Hebrew Academy will also be contracted to provide educational programming for the children. Children will be taught reading, writing, math, science and social sciences, the Office of Refugee Resettlement said in June, as well as participate in recreational activities such as art, music and indoor and outdoor athletics.

“While in ORR care, children have access to medical treatment, legal services, translation services, education, and mental and behavioral health counselors and are able to connect with family at least twice a week,” the agency said in its statement. “Children also meet with a case manager at least weekly.”

The academy is expected to hire up to 800 people, including administrators, teachers, counselors, medical care professionals and other workers, to oversee the facility and meet the needs of unaccompanied children.

The federal agency will also contract for services such as food and security.

DHHS did not respond to emails sent by the News & Record in the past month requesting more details about the arrangement, including how many children the school could potentially host and how much it would pay the academy for providing educational services. By law, DHHS must provide care for children who have no lawful U.S. immigration status; are younger than 18; and who have no parent or legal guardian available to provide care and physical custody here.

ORR said in a statement last month that to meet its legal responsibility, the agency “continuously explores potential facility options for future needs to ensure that children do not have to remain in border patrol facilities, which are not appropriate locations for children.”

In a June 23 letter sent to federal officials, eight congressional Republicans from North Carolina expressed concerns about the facility, calling it “a complete surprise to us and our constituents.” 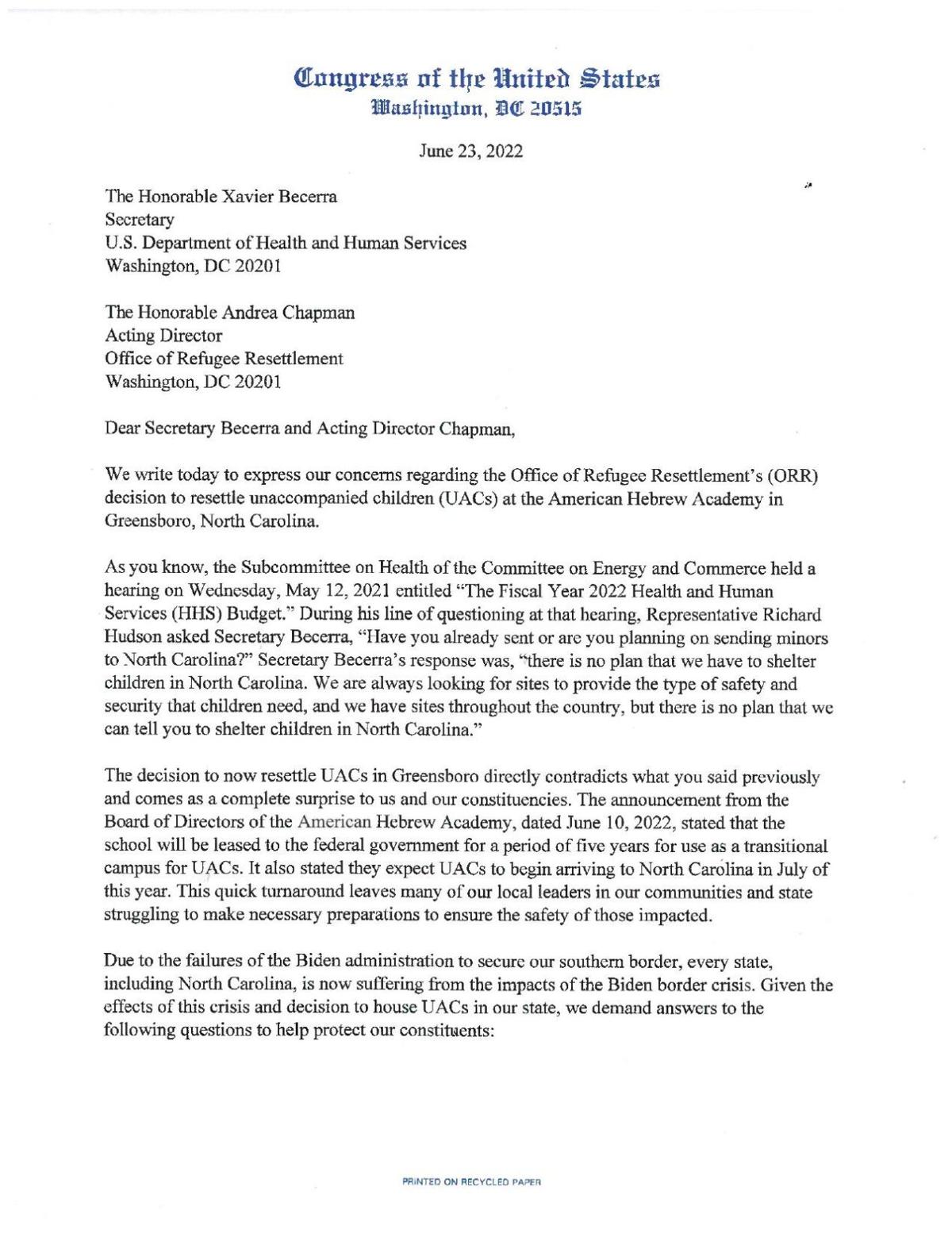 Rep. Richard Hudson, R-Concord, asked Becerra during a May 12, 2021, subcommittee hearing regarding DHHS’ budget if the department planned to send minors to North Carolina. Becerra responded that “there is no plan that we can tell you to shelter children in North Carolina.”

Just a few days before that hearing, the city of Greensboro issued a news release that it had met on May 4, 2021, with DHHS officials to conduct a site assessment of the former American Hebrew Academy site as “a temporary influx housing for unaccompanied children.”

Among the questions posed in the letter were how much taxpayer money is being used to house unaccompanied children and what plans are in place to prevent crowding, violence and outbreaks of disease at the academy.

A spokeswoman for McHenry said Wednesday he had not gotten a response to the letter.

Rep. Kathy Manning, D-Greensboro, whose district includes the facility, could not be reached for comment.

A report Friday from WGHP-Channel 8 indicates there will be two meetings later this month among “stakeholders” involved with the plans to host immigrant children. That report could not immediately be verified.

American Hebrew Academy closed in 2019 and plans to reopen it as AHA International School did not come to fruition. The highly secure facility has student residential quarters, an infirmary and a cafeteria, as well as three academic buildings.

The facility will be renamed the Greensboro Piedmont Academy Influx Care Facility for UC (unaccompanied minors), though the school will be called Greensboro Global Academy.

An overhead look at the former American Hebrew Academy

American Hebrew Academy received COVID-19 loans — even after it closed

Records from the U.S. Small Business Administration show the private, nonprofit school received two loans for $743,059 each, one in May 2020 and another in February 2021.

Another contract, this one for $177 million, awarded for services at Greensboro site for unaccompanied migrant children

GREENSBORO —  U.S. Rep. Kathy Manning announced Tuesday that the U.S. Department of Health and Human Services is taking some steps she expects…