LIVE: Family of victim speaks after Buffalo shooting that killed 10

GREENSBORO — Calvin Morrow Sr., who made history as a member of the first Black U.S. Navy band, died Sunday.

At 96, Morrow had been the last survivor of the 44-member B-1 U.S. Navy Band, formed during World War II. The other remaining member, Simeon Holloway, died Dec. 30 at age 100.

In August 2018, Morrow was the only member able to attend when the band and related families held an annual reunion in Charlotte. At that point, three members were alive.

“When you are the last person... it’s an unusual feeling,” Morrow, a retired Greensboro elementary school principal, said in a 2018 News & Record article.

In 1942, those 44 young African American men broke the Navy’s color barrier when they formed its first all-Black band.

It marked the first time that the Navy let Black sailors rise above a rank higher than cooks and stewards.

Most came from N.C. A&T and Dudley High School. Morrow was among them.

Watch Calvin Morrow talk about the B-1 U.S. Navy Band in a 2017 interview.

East Carolina University professor Alex Albright wrote about the band in his 2013 book, “The Forgotten First: B-1 and the Integration of the Modern Navy.”

In 2017, a historical marker about the B-1 U.S. Navy Band was erected in Chapel Hill.

Survivors include Gertrude Morrow, his wife of 71 years, and two sons.

A private graveside service honoring his life will be held on Saturday at Guilford Memorial Park.

John R. Thompson and Calvin Morrow, both of Greensboro, were among five veterans honored by the N.C. Department of Military and Veterans Affairs on African American Lineage Day. Wednesday's ceremonies at the N.C. Museum of History celebrated the contributions of African Americans in the U.S. military at a time when it was segregated.

Back in 1942, 44 young African-American men broke the Navy’s color barrier when they formed its first all-black band during World War II. Most came from N.C. A&T and Dudley High School in Greensboro. Calvin Morrow was among them.

The DVD playing in Calvin Morrow’s spacious den tugs at the emotions. 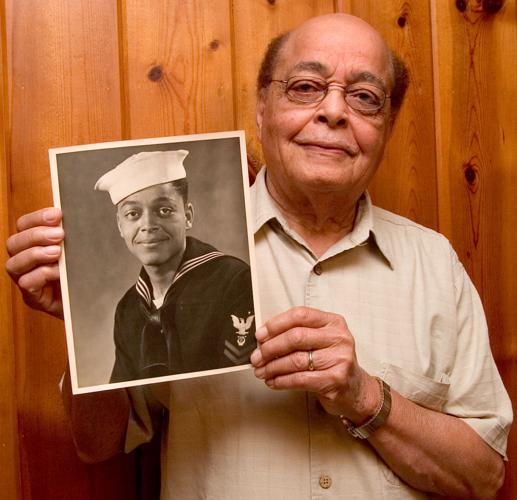 In this 2007 photo, Calvin Morrow shows off a picture of himself in “dress blues” as a member of the Navy’s B-1 Band. The band was made up of students from N.C. A&T, Dudley and two other schools. 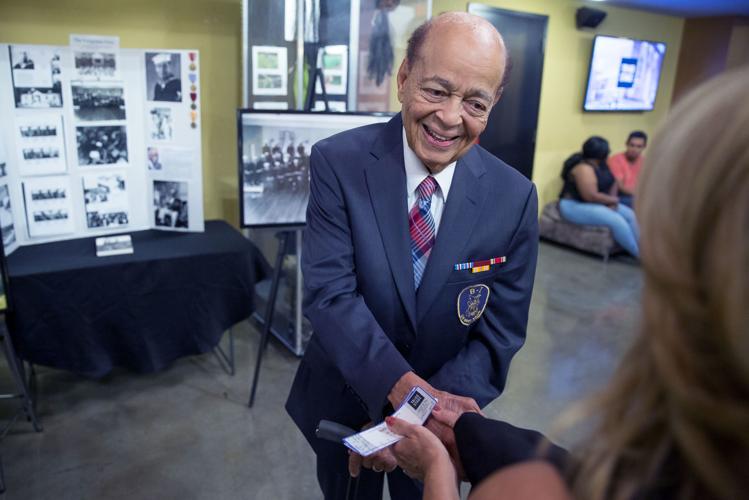 Former U.S. Navy B-1 Band member, and Greensboro resident, Calvin Morrow shakes hands in the lobby at a Triad Stage performance of “South Pacific” in September 2017. Morrow was honored before the show because he was a member of the Navy’s first all-Black band during World War II.