Greensboro officials gave a tour of the shelters on the outfield of a baseball diamond at Billie Nall Park on Dec. 21, 2022.

GREENSBORO — There was little activity mid-morning Thursday at Pomona Park, and that’s the way James Estes likes it.

Estes, who has a prosthetic leg and needs a hip replacement, is among the people living in the “pallet houses“ that the city installed to house people without homes.

“It’s peaceful, somewhat,” said Estes, 53, who was referred by Urban Ministry to what the city calls the Doorway Project.

The effort includes 30 temporary shelters that can accommodate up to 58 people (two are one-person handicap-accessible units), along with 35 parking spaces set aside for people who are living in their vehicles. The winter emergency housing site includes onsite security, bathrooms, showers, a microwave oven and a cellphone charging station.

“It does take a little bit of a stress off of you,” said Estes, who’s lived here about two weeks. “It kind of changes you a little. It gives you a little hope, I guess you’d say.”

As of Friday, 39 people were housed in the shelters and another 17 were scheduled to move in this week.

While some of the residents were sleeping, others had left for work, said Pedro Rosa, a team lead for the Interactive Resource Center, which is managing the Doorway Project.

But another reason it was quiet is that not all of the shelters were occupied despite a waiting list of 25 people as of Friday.

Kristina Singleton, executive director for the Interactive Resource Center, said 39 people were housed in the shelters on Friday and another 17 were scheduled to move in next week.

Singleton said the reason the pallet houses aren’t filled has to do with tracking down the applicants who have been approved for the program.

“The issue is that there are some folks that maybe are hard to track,” she said, noting that at least a couple of the people referred to the program did not have cellphones. “We’ll give some leniency ... we know that it takes time sometimes to find the person to get them into the pallet shelters.”

The Interactive Resource Center allows for five attempts to contact a prospective tenant before moving on to the next person.

“We originally gave a week because of the holidays and ... there were organizations that weren’t open,” Singleton explained. “It wasn’t fair to the client to make them lose their spot because the organization was closed.

“Now it’s really a case-by-case basis, depending on what the situation of the person is. But we’re not willing to leave that slot open very long, obviously, because people could be using that bed.”

Along with their own clients, the IRC also gets referrals from Tiny Houses, Greensboro Urban Ministry, Partners Ending Homelessness and Cone Health.

Three people initially housed in the village have moved on to more permanent housing, freeing up some shelters.

“Our ultimate goal is to make this kind of like a revolving door ... that this is just a temporary step to long-term housing,” Singleton said.

Still, the pallet house village is not for everyone. “We do a needs assessment and that intake determines your level of need and how the list is made for who would be able to stay in there,” Singleton said.

After approval, the IRC tries to pair people who are similar in age and temperament. “We will not place a weaker person with someone that has a higher level of aggressiveness,” Rosa said. “We try to match them up so that the communication between both will be at the same level.”

Still, there have been arguments and fights. “We try our best,” Rosa said, “but we really don’t have control over that to an extent.”

One person was discharged from the program for attempting to hurt another resident. “We try to deal with that ASAP,” Rosa said.

The common office where residents can use the microwave oven and mobile phone chargers at Pomona Park's pallet house village.

Because the shelters are considered temporary housing, the N.C. Department of Insurance requires they remain for only 180 days, according to Michelle Kennedy, the city’s director of Housing and Neighborhood Development. That means the city will dismantle the pallet houses — which cost $380,000 — from the park’s baseball outfield at the end of March and store them until next winter, unless they are needed for such things as natural disasters.

Liz Alverson, the city’s homelessness prevention program coordinator, said case workers will have plans in place for residents to move into other housing when the village is closed.

The other part of the Doorway Project, the Safe Parking initiative, also is off to a slow start — with 15 of the 35 spaces filled as of Friday. However, that number is growing as word spreads about the program.

The IRC has sent flyers about the program to emergency responders and nonprofits who may encounter homeless people. Alverson said she plans to work with Walmart and other businesses to educate them about the program, so they can pass along the information.

“We know a lot of people park at the Walmart parking lot on Wendover,” she said. “It’s not connected to the case management piece and that’s what’s key here — making sure people get connected to services and permanent housing.

“We know that folks are out there and they just need to know that this is a safe place for them to go overnight.”

Unlike the pallet house program, Safe Parking is a year-round initiative. However, it will be moved to another location before baseball season begins in April. Alverson said the city is just beginning the process of identifying another location. That new location will still offer bathrooms, showers and onsite security, she said.

As for Estes, who’s been unable to work full time for three years, he said he’s applied for disability.

And while that approval process is slower than “molasses on a 60-below day,” Estes said “as soon as I get my disability, I’m moving to Florida.”

Greensboro officials gave a tour of the shelters on the outfield of a baseball diamond at Billie Nall Park on Dec. 21, 2022.

Why snail skin therapy is the new facial trend 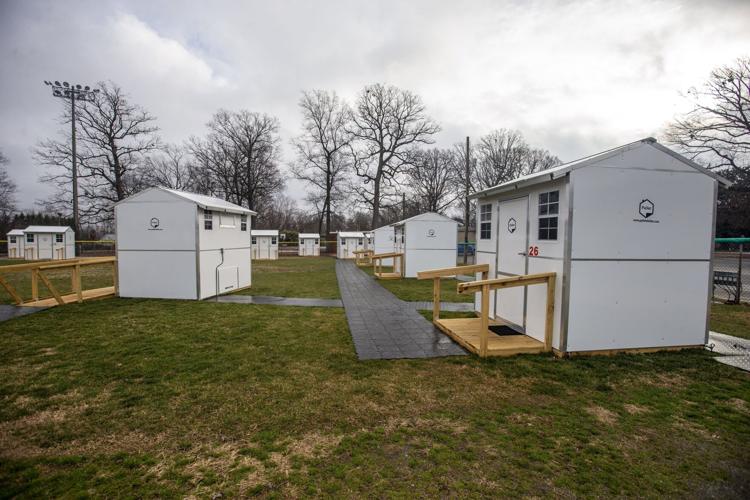 As of Friday, 39 people were housed in the shelters and another 17 were scheduled to move in this week. 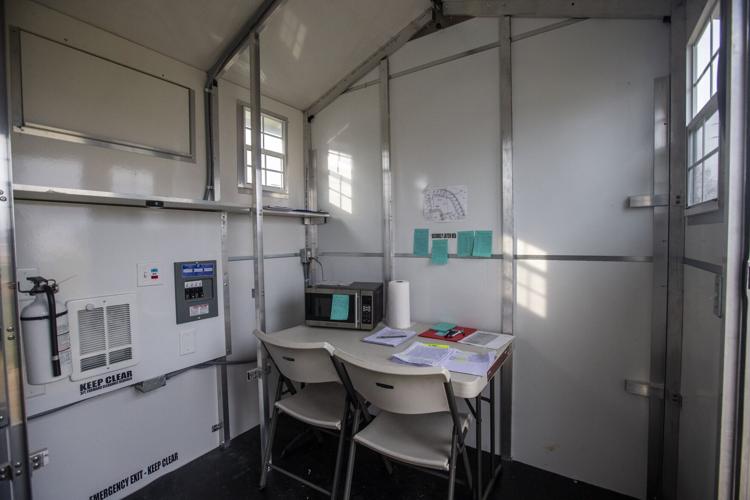 The common office where residents can use the microwave oven and mobile phone chargers at Pomona Park's pallet house village.