The U.S. National Park Service describes historic preservation as a “conversation with our past about our future.”

But there are elements of the future — and even our present — that the past never could have imagined.

Rising oceans, wildfires and severe storms fueled by a warming planet are among the growing threats to historic sites and structures.

But strategies to reduce greenhouse gas emissions also can collide head-on with efforts aimed at maintaining the historical authenticity of landmark structures. Preservation means presenting buildings in the future the way they looked in the past — before the advent of rooftop solar panels, electric vehicle chargers and other clean energy amenities.

That can present a particular challenge to homeowners looking to significantly reduce their carbon footprints in areas protected by historical designations.

Two Triad historic homeowners with a lot in common described very different experiences when they decided to do just that.

‘Thought it was cool’

Matt Giegengack, an ophthalmologist and associate professor at Wake Forest University Medical School, decided in 2019 that adding rooftop solar panels to his home in Winston-Salem’s historic West End area was the next logical step in his family’s shift to sustainability.

Giegengack; his wife, Claire Calvin (owner of The Porch Kitchen & Cantina and Alma Mexicana); and three children already raised chickens, grew vegetables and composted in the backyard of their Queen Ann cottage-style home built in 1901.

Giegengack also had bought a Tesla electric vehicle and had a charger installed on the right-front corner of the multicolored North Spring Street house he and Calvin have owned since 2007.

Representatives from Raleigh-based NC Solar Now told Giegengack they could help him secure a loan to cover the purchase and installation of rooftop panels with no down payment, and that the money he saved on his monthly electric bills would more than offset his loan payments.

That’s because when rooftop solar panels generate more power than what is needed for the home, the excess is sent to the grid and Duke Energy credits the owner for the difference.

Giegengack insisted his inspiration was purely altruistic, however.

“I decided to do it because I thought it was cool and it was so easy and it was a good thing to do,” Giegengack explained. “I didn’t do it because I needed the extra money every month. I mean, I like that, but that wasn’t the motivation.”

In Greensboro, retired Guilford College music professor Tim Lindeman also had considered adding rooftop panels to his 19th-century home in the historic College Hill area but initially decided against it because of the cost.

However, the more he and his wife, Nancy Walker, learned about the threats posed by climate change, the more they wanted to be part of the solution, not a contributor to the problem.

“We will lose money on the deal because we’ll die before we recoup what we spent on the panels,” Lindeman admitted. “But we wanted to reduce our carbon footprint, and this was the best way to do it.”

Lindeman talked with three companies before settling on Wake Forest-based 8MSolar to handle the installation on the house they’ve lived in for three decades.

At Giegengack’s home, NC Solar Now designed a rooftop system and was prepared to move forward with installation in 2019 — until the company discovered the house was in a designated historic area.

In North Carolina, state law empowers local governments to appoint commissions that recommend the designation of historic districts and landmarks, then enforce standards within those areas.

Typically, any exterior changes that will affect the appearance of buildings that are designated as “contributing structures” within a historic district must be approved by a local historic landmarks commission.

When NC Solar Now realized it was dealing with a historic home, Erin Hawks, the company’s senior program manager, stepped in.

She submitted an application on Giegengack’s behalf for a “certificate of appropriateness” to the Forsyth County Historic Landmarks Commission to allow for the installation of the rooftop panels.

“That was the beginning of a long process,” Hawks said.

Of the more than 500 structures included in the West End historic district, Giegengack’s home was set to be the first with solar panels. That meant rooftop solar was a new concept for the commissioners, who expressed concerns that the panels would compromise the home’s historic integrity.

“They basically said, ‘We’re just not sure that’s going to work because we can see it and everyone can see it. It’s a historic district, and no else has anything like that right now,’” Hawks recalled. “They were just very thorough.”

Proper placement of panels is crucial to get the most exposure to the sun possible. That typically means installing them on rooftop surfaces with a southern exposure, but those preferences also limit flexibility in how arrays are laid out.

Hawks followed up with detailed illustrations showing exactly how the panels would look from in front of the house, and submitted two revised applications before the certificate of appropriateness was finally approved.

“The third time, they finally understood it was going to be minimally visible, if at all,” she said.

But the original plan for 29 panels was cut to 15, Giegengack said.

In Greensboro, Lindeman experienced no pushback at all, mainly because the panels were on the rear part of the house and not visible to passersby.

“We actually got the certificate of appropriateness after the panels were installed,” he said.

Lindeman is one of several historic homeowners in Greensboro who have added rooftop panels, said Mike Cowhig with the city’s planning department.

“Usually (the panels) are flush mounted and located where not easily visible from the street,” he added.

Lindeman said he’s unsure of how much he’ll save on his power bill because the panels have only been operational for a few months.

Giegengack’s overall savings since his panels went online in May 2020 have been more than $1,000, said Hawks.

“For example, we anticipated how we could accommodate and review things like electric car chargers,” she explained. “We also spent a lot of time discussing how to review and consider substitute materials when replacement of original building fabric is required — including looking at environmentally friendly building fabrics. We did our best to make the review process in both circumstances easier.”

But Bratland and other experts also caution that alternatives aimed at environmental sustainability are often ineffective in historic buildings.

“When we attempt to impose modern standards for building efficiency onto traditional forms of construction, we sometimes create new problems which, all good intentions aside, hamper building longevity and performance, putting us farther from our goal of environmental friendliness than we were to begin with,” said Brett Sturm, a restoration specialist at the N.C. Historic Preservation Office.

That’s because some of the methods and materials used to make modern buildings more resilient are incompatible with materials and construction in historic structures, he explained.

“In other words, they put old building materials like old-growth lumber, plaster or hand-pressed brick in difficult situations ... where they can’t dry as they need to, for example, or expand and contract as they would, naturally, with changes in humidity or temperature,” Strum said.

But even without enhancements to make them more energy-efficient, simply preserving historic structures can be good for the environment.

“There’s a saying in our profession that ‘the greenest building is the one that’s already built,’” Strum noted. “When the service life of an old building is extended — for example, by maintenance, rehabilitation, or adaptive reuse — the need for a new building is negated.”

Preservation, he added, also keeps materials “already paid for in carbon terms” out of landfills.

Because rooftop solar panels are a modern technological addition, visibility will almost always be the deciding factor in whether they are permitted in historic areas, Strum and other experts noted.

What wasn’t there then shouldn’t be in the picture now.

“With ours, you really have to be looking for them to see them,” Giegengack noted.

Keeping the panels out of sight helps maintain the historical integrity of his home, and Giegengack said he appreciates that.

“But if they were more visible, I bet more people in West End would install them,” he added. “I don’t think it occurs to everybody that solar is a possibility, and then the idea of going to the historic association is daunting.”

For Giegengack, hiring a solar company with experience in dealing with historic commissions took the stress out of what could have been a frustrating experience.

“It was zero effort on my part except for occasionally signing papers, which is cool,” he said.

John Deem covers climate change and the environment in the Triad and Northwest North Carolina. His work is funded by a grant from the 1Earth Fund and the Z. Smith Reynolds Foundation. 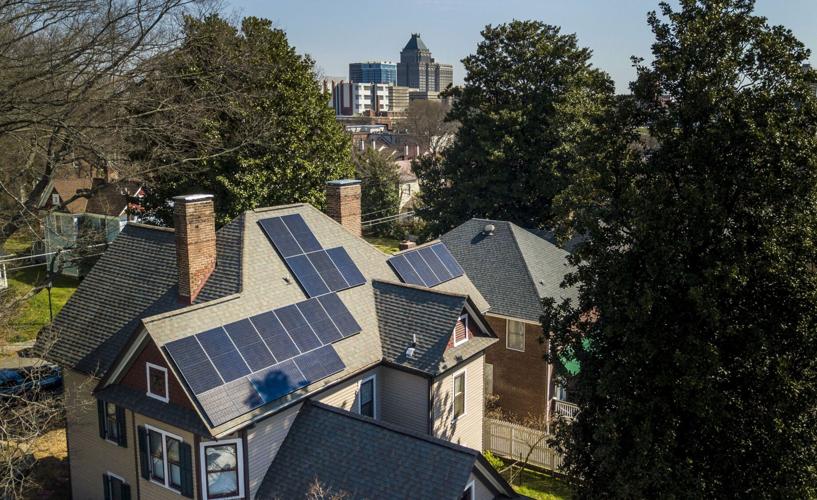 Tim Lindeman is one of several historic homeowners in Greensboro who have added rooftop solar panels, according to the city’s planning department. 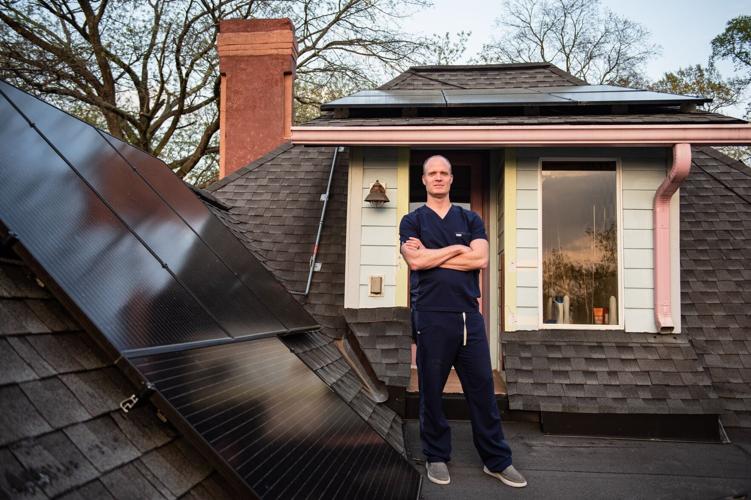 Matt Giegengack, owner of an 1890 historic house in the West End Historic District, had solar panels installed on the roof of the home in Winston-Salem. Owners of historic homes and local governments are finding a balance between preservation and sustainability when it comes to the installation of rooftop solar panels and other improvements aimed at saving energy and reducing emissions. 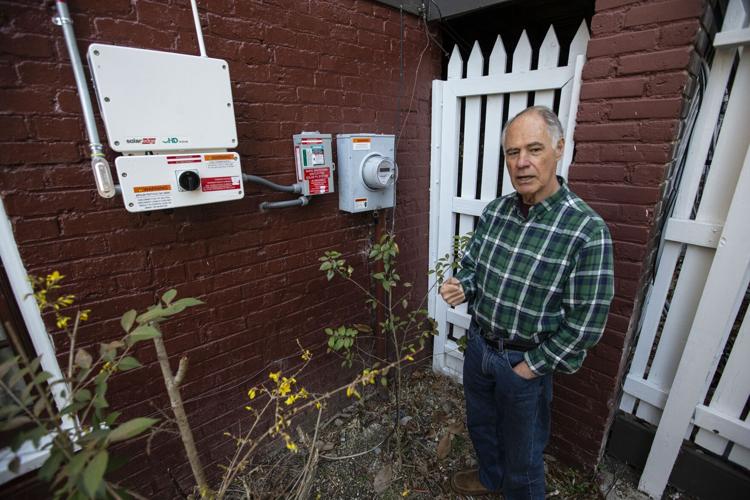 Retired Guilford College music professor Tim Lindeman added rooftop panels to his 19th-century home in Greensboro’s historic College Hill neighborhood. “We will lose money on the deal because we’ll die before we recoup what we spent on the panels,” Lindeman says. “But we wanted to reduce our carbon footprint, and this was the best way to do it.” 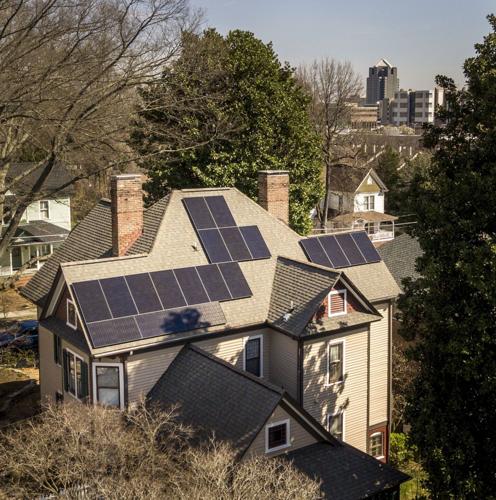 Tim Lindeman said he experienced no pushback at all on installing rooftop solar, mainly because the panels were on the rear part of the house and not visible to passersby. 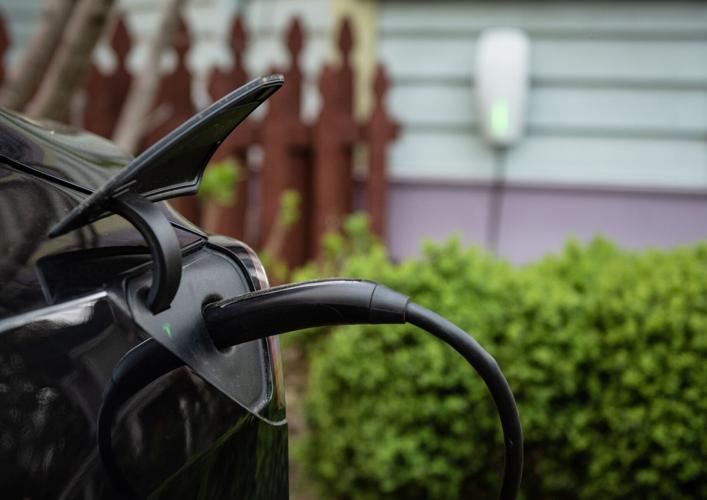 Matt Giegengack charges his Tesla with a device connected to his house in the West End Historic District. 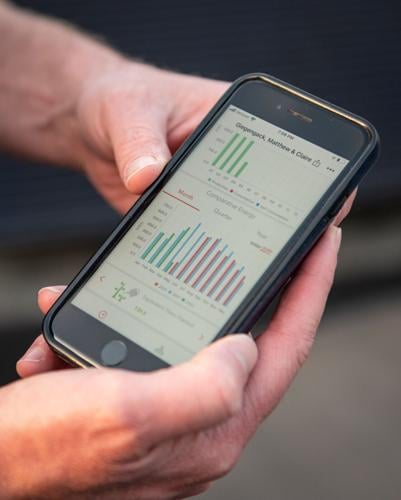 Matt Giegengack, owner of an 1890 historic house in the West End Historic District, shows an app on his phone that compares energy produced and used from the solar panels he had installed on the roof of his home. 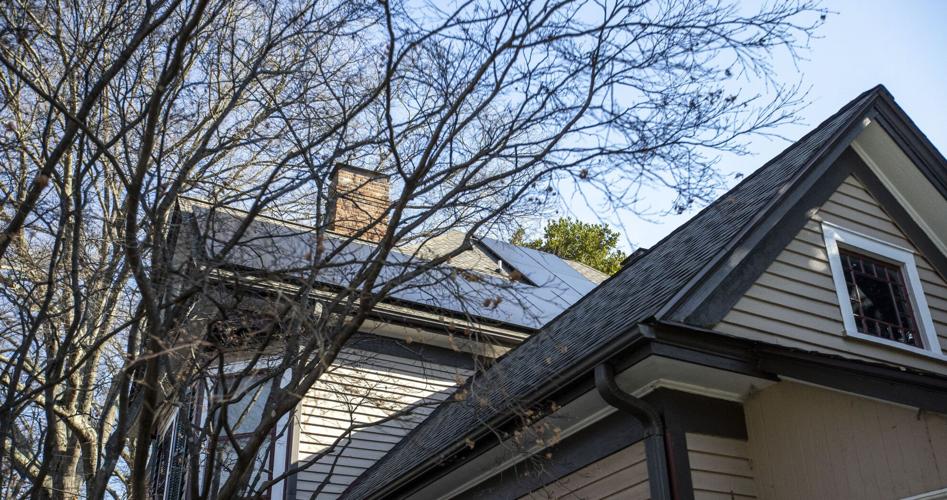 Tim Lindeman is one of several historic homeowners in Greensboro who have added rooftop solar panels, according to the city's planning department.