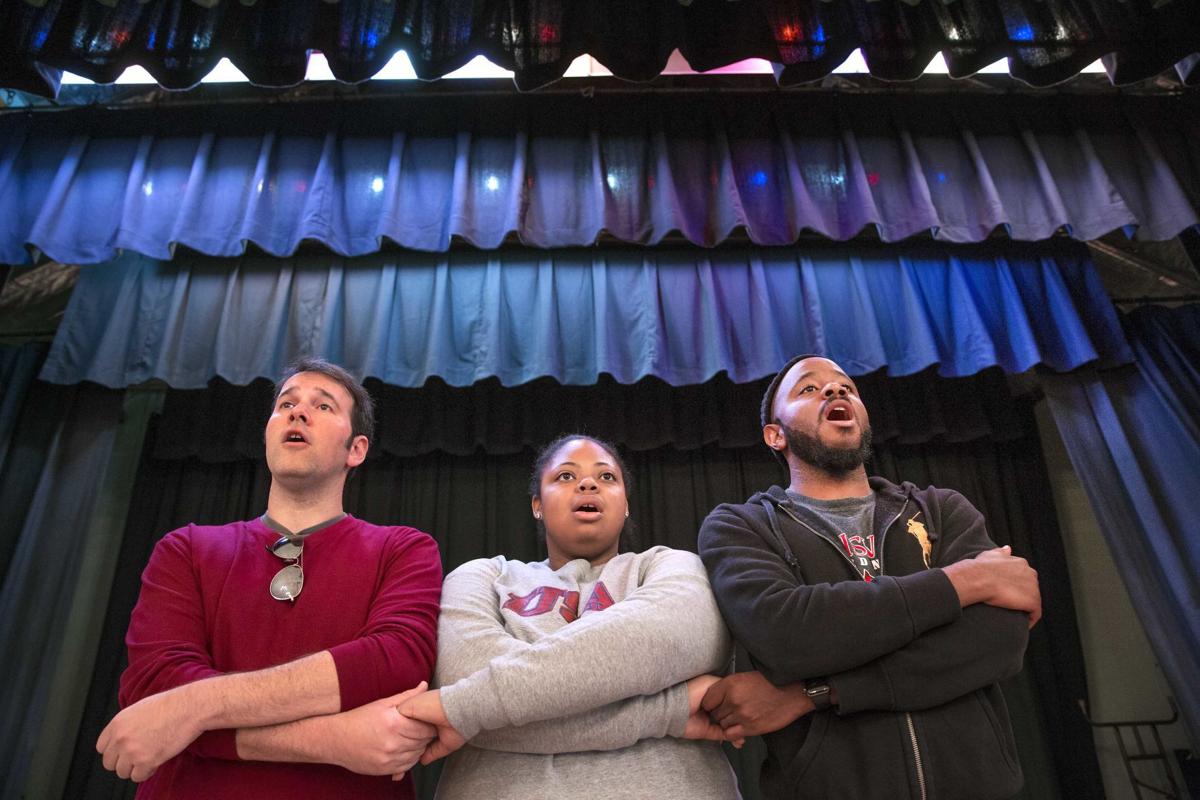 In this November 2019 photo, Andrew Schlosberg, A.J. Buffaloe and Tyler Madden join hands to sing “We Shall Overcome” during the Touring Theatre of North Carolina’s rehearsals for a production of “The Life and Times of Fannie Lou Hamer.” 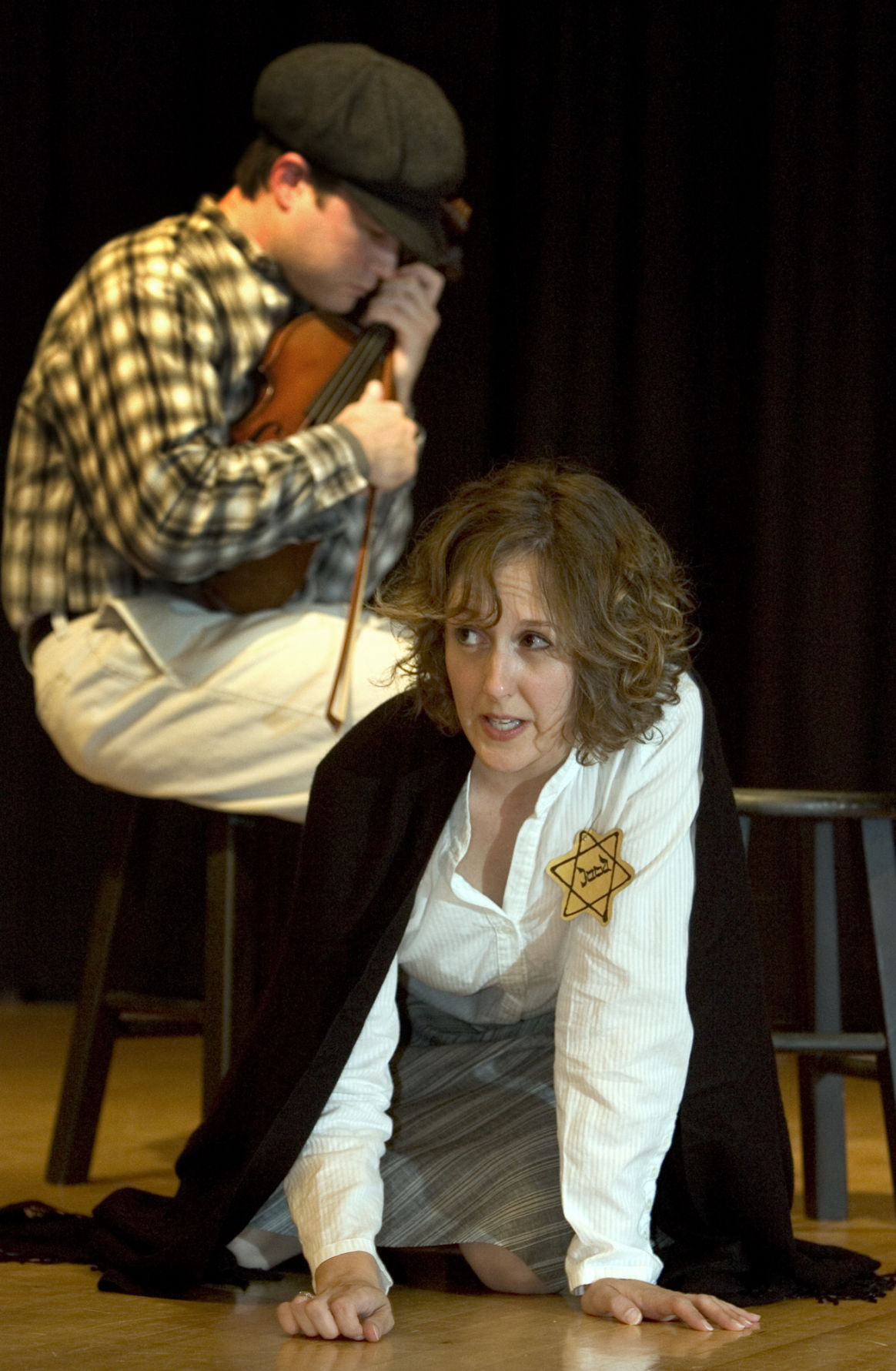 In this 2006 photo, Sarah Kelly Hillenbrand portrays Ursula Gumpert Heckler as she scrubs the floor of a concentration camp with Ueli Schweizer playing Karl Stojka during rehearsals for a production of "Let Your Children Tell."

GREENSBORO — This should have been the Brenda Schleunes Legacy Season for Touring Theatre of North Carolina.

In 2020-21, Touring Theatre planned to present several productions that Schleunes has written over 39 years for the professional, nonprofit theater company that she founded in Greensboro.

Schleunes has created about 50 adaptations, compilations and original works from historical documents, literature and people within its community.

They focus on themes of culture, race, gender, religion and economic status.

The troupe would not only travel to present them, but put them on local stages during its legacy season. And it would raise money to continue its work.

Donna Bradby, Touring Theatre’s executive director, said that she was disappointed by the pause.

“The work that Brenda has done is so important,” Bradby said.

Touring Theatre and its legacy season will restart when the pandemic subsides — and when its host stages at Well-Spring retirement community and the UpStage Cabaret at Triad Stage reopen.

But Schleunes won’t be living here.

Schleunes, 81, and her husband, Karl, will move to Charlotte this month. They will be closer to daughter Anna and her family.

Her title of artistic director soon will be more of a consultant role.

“Well, we have Zoom,” Schleunes (pronounced Schloy’-nes) said. “I won’t necessarily direct something. But I can easily create and communicate and watch a rehearsal.”

Right now, her focus is more on the move and on her husband, who is seriously ill.

Touring Theatre will carry on her legacy.

Her plays include the civil rights-themed “The Life and Times of Fannie Lou Hamer,” “Let Your Children Tell” about the Holocaust, “Star Spangled Girls” about women who served during World War II, and “Mad at Miles,” set against the backdrop of trumpeter Miles Davis and actress Cicely Tyson’s abusive marriage.

She has taken her productions on tour to 60 North Carolina counties, 16 states and the District of Columbia.

Although they address issues that have taken center stage nationally in the last year, Schleunes long has addressed them.

“She was doing controversial social change stuff long before a lot of theater companies were doing it,” Bradby said.

Now she divides her time and talent between teaching at A&T and overseeing Touring Theatre, where she became executive director in 2016 and took over administrative responsibilities that Schleunes once handled.

Bradby’s research has uncovered no other company quite like Touring Theatre, with Schleunes drawing on documents in their original form to create new works. Some theater companies do it, but not consistently.

“The company is not just for entertainment,” said Allen Broach, board president. “Each program is educational, and no other theater group does that. As the positioning statement says, ‘Touring Theatre is Beyond Entertainment.’”

Brenda and Karl Schleunes moved to the city 50 years ago. He became a history professor at UNCG and a world renowned expert on the Holocaust. Greensboro College hosts an annual lecture named after him.

“My dear husband said, ‘Oh, that will never work,’” she recalled. “But he said, ‘Go ahead and try.’ Then he had to eat his words several times.”

She started by adapting award-winning children’s books to promote reading and literacy among the young.

Her first: the children’s play “From the Mixed-Up Files of Mrs. Basil E. Frankweiler.”

She expanded into adult audiences, becoming known as an intense, tenacious leader passionate about her work.

Touring Theatre became known as being led by women, producing plays primarily about women, but with male actors in its ranks.

“Letters from Leokadia” relies on letters from a Polish woman who found, raised and saved a Jewish child during the Holocaust. That put Touring Theatre on the map nationally.

“Let My People Go” tells of Amelia Green, a free Black woman from New Bern who bought her daughters out of slavery. It’s based on court records, researched by UNCG professor Loren Schweninger.

“Dr. Claribel, Miss Etta and the Brothers Cone” drew on biographies and archival materials for the play about a generation of one of the city’s most prominent families.

Schleunes and her actors have had adventures along the way. They have dealt with delayed flights and car trouble, yet still made it to shows on time.

They have played to audiences large and tiny, urban and rural and, on occasion, hostile. “I would look out in the audience and there was not one face of color,” Bradby recalled.

“The Life and Times of Fannie Lou Hamer” became the last play that Touring Theatre presented in February 2020. For the first time, Schleunes played a role in one of her own productions, an old white woman at the laundry.

Guilford County Schools had contracted with Touring Theatre to present its new children’s show, “Fabulous Me, Fantastic You.” COVID-19 halted that plan.

Touring Theatre had asked school system officials if they wanted virtual presentations instead. “They said, ‘Absolutely not. We want our students and faculty and staff to experience Touring Theatre live, because the work is so powerful and so impactful,’” Bradby said.

In the meantime, four women with Touring Theatre trained in Schleunes’ process.

Kay Thomas, Vanecia Boone, Camilla Millican and Erin Johnson have in the works “Four Women Along Interstate 10,” adapted from a short story collection by Kelly Cherry.

Each created a segment of the production, and were auditioning actors for their casts. COVID-19 put a temporary hold on that, too.

Schleunes still works on a couple of projects. She doesn’t known when they will be finished, she said.

She long had planned to write a piece on Black men and the police.

But as more information came out about the deaths of George Floyd, Breonna Taylor and others, “It was impossible to collect into one piece,” Schleunes said.

Now she’s exploring turning the life of a Black woman who now lives in Charlotte into a play about racism experienced across 60 or 70 years.

“It could be a one-woman piece and, I think, a powerful piece,” Schleunes said.

She also promised the company that she would write a musical set in the 1930s.

As for Touring Theatre’s future, “I hope that it thrives and grows,” Schleunes said.

Bradby hopes that, too.

“I am hoping artistically that the pieces that we have done for so many years, that we can sustain them, keep them going,” Bradby said.

She listed other goals: “That we can maintain enough work for a company of actors. That Brenda will still contribute artistically. And that we can keep the company well above water for many years to come.”

She wants to continue to build a legacy with young people at every level, and to work with both young women and mature women.

“We want Touring Theatre to become a model of best practices for this type of work and this type of company, that does relevant work and lives on forever,” Bradby said.

The final tally announced Friday is well above anything the university had imagined. A&T believes it's also a fundraising record for historically Black public universities.

In this November 2019 photo, Andrew Schlosberg, A.J. Buffaloe and Tyler Madden join hands to sing “We Shall Overcome” during the Touring Theatre of North Carolina’s rehearsals for a production of “The Life and Times of Fannie Lou Hamer.”

In this 2006 photo, Sarah Kelly Hillenbrand portrays Ursula Gumpert Heckler as she scrubs the floor of a concentration camp with Ueli Schweizer playing Karl Stojka during rehearsals for a production of "Let Your Children Tell."