GREENSBORO — Two new COVID-19 outbreaks associated with nursing facilities in Jamestown have been reported to the state, according to data released by the N.C. Department of Health and Human Services on Tuesday. 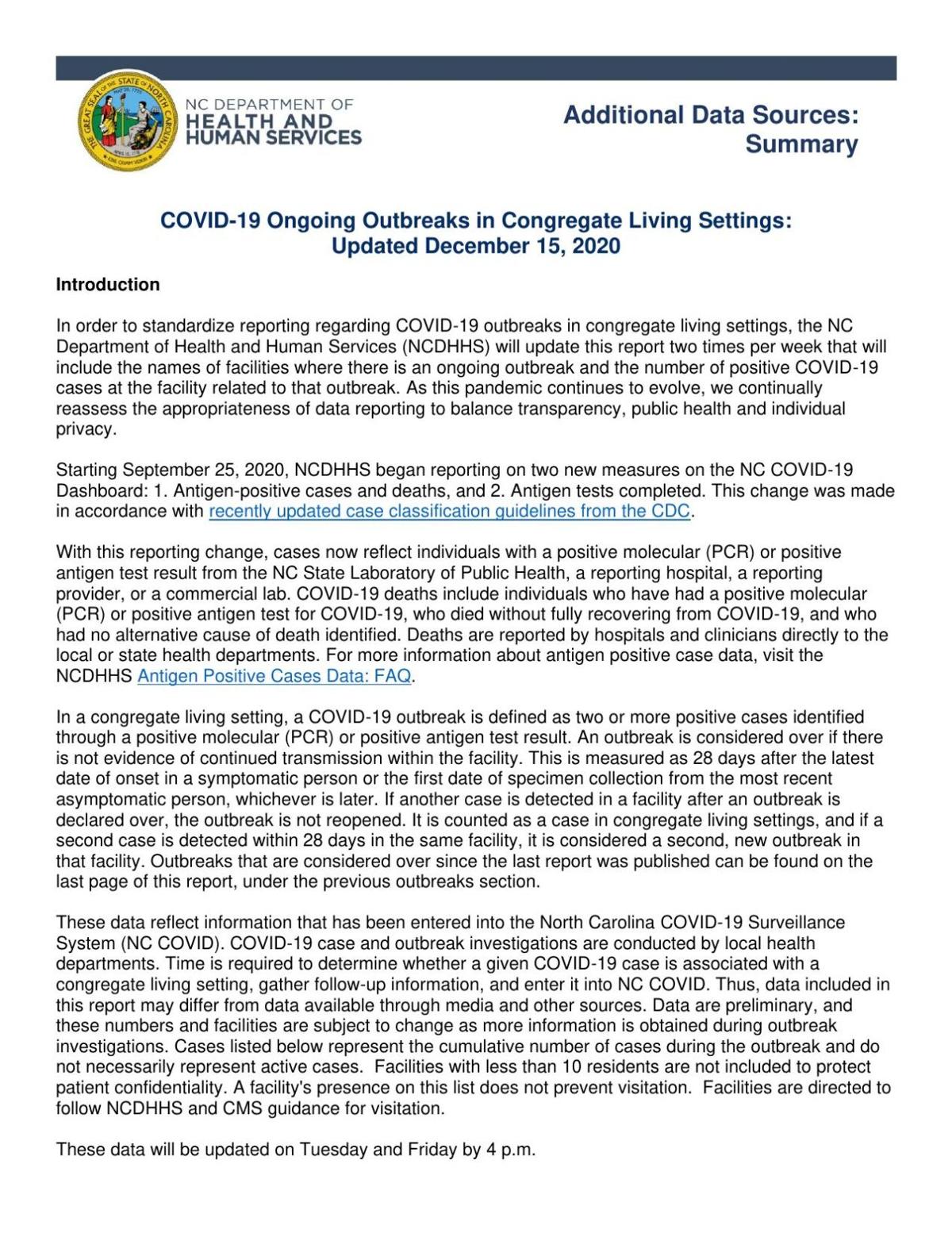 The Shannon Gray Rehabilitation and Recovery Center has four coronavirus cases among staff members, according to the report. No cases were reported among residents.

"Our staff has done a phenomenal job thus far during this pandemic," said Jess Hamilton, director of clinical services, who declined to comment further.

"It’s not totally unexpected with the positivity rate rising in the county and with the Thanksgiving holiday," Executive Director Sherry Ingram Bass said.

A previous outbreak at Adams Farm, which involved 58 cases and three deaths, was declared over in September.

According to Tuesday's report, outbreaks at Brighton Gardens of Greensboro (four cases) and Brookdale High Point Assisted Living (seven cases) are now over.

In a congregate-living setting, a COVID-19 outbreak is defined as two or more laboratory-confirmed cases. An outbreak is considered over if there is no evidence of continued transmission within the previous 28 days.

Data included in NCDHHS' twice-weekly report — issued late Tuesday and Friday afternoons — is preliminary and subject to change. Cases listed in the reports do not necessarily represent active cases.

From rage, panic and grief, to hope, determination and renewal, these stories from 2020 reflect the spectrum of human emotion.

N.C. A&T student Cody Byrd felt 'adrenaline rushing' when he realized a girl might be abducted. That's when he intervened.

Cody Byrd didn't give in to the rage. He kept his head, and helped police capture a man accused of trying to kidnap a little girl.

Amid protests and calls to defund the police, law enforcement leaders in the limelight

Law enforcement leaders faced a double-menace in 2020: the new coronavirus and age-old racism.

Grocery store workers found themselves on the front lines of the COVID-19 fight, and rallied to meet the need.

As a former law enforcement officer and a father, Michael A. Potter struggled to find answers to why his son was fatally shot by police.

While all Americans have ridden 2020's emotional tidal wave, perhaps few have felt its impact as deeply as African Americans.

GREENSBORO — Police say they have identified the body found Thursday in Guilford County as Alan Aidan Tran, 19, whose Dodge Charger was found …

The man was arrested Thursday by High Point police officers on a federal parole violation, according to the release.

At the Z. Smith Reynolds Foundation, Guilford County Schools Chief of Staff Nora Carr rejoins former district Superintendent Maurice “Mo” Green, who is the foundation's executive director. Green, who joined the district as superintendent in 2008, left in 2016 to lead the Winston-Salem nonprofit.

A severe thunderstorm caused numerous power outages and downed trees in the Triad on Saturday night.

Alan Aidan Tran was last spotted at his Greensboro home on Monday about 2 p.m.

Kent Layher, who grew up in Greensboro, is continuing to farm the land by the Yadkin River — a dream his wife had wanted to pursue before she died after a bout with cancer.

Cone Health requiring all employees to get COVID-19 vaccine

The hospital system, which serves Guilford, Alamance, Rockingham, Forsyth, Caswell and Randolph counties, said in a news release the decision comes as the more contagious delta variant of the virus that causes COVID-19 increasingly dominates new cases in the state and nation.

Deputies found Stephanie Hutton, 25, dead from a gunshot wound early Sunday, according to the release.