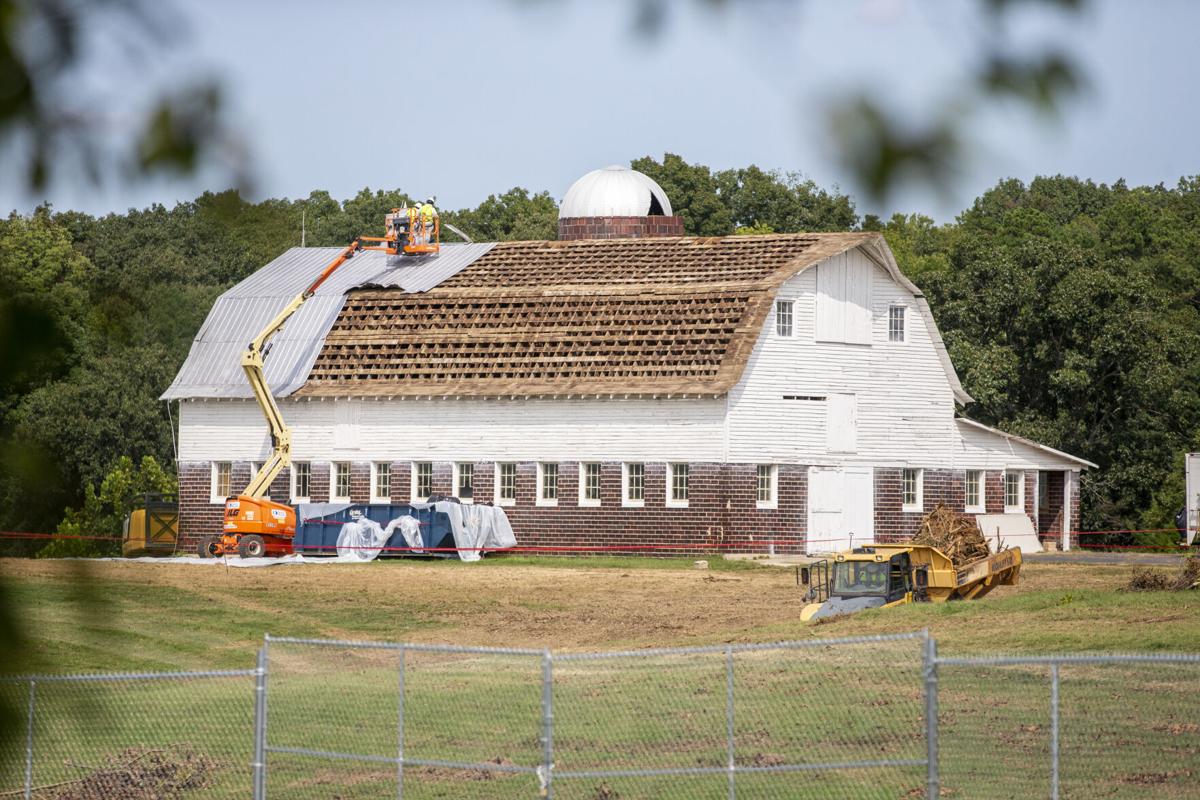 A work crew removes the roof from the  Coble barn on West Friendly on Tuesday. The historic structure is being torn down as part of an expansion of Friends Home, the Quaker-affiliated retirement community. 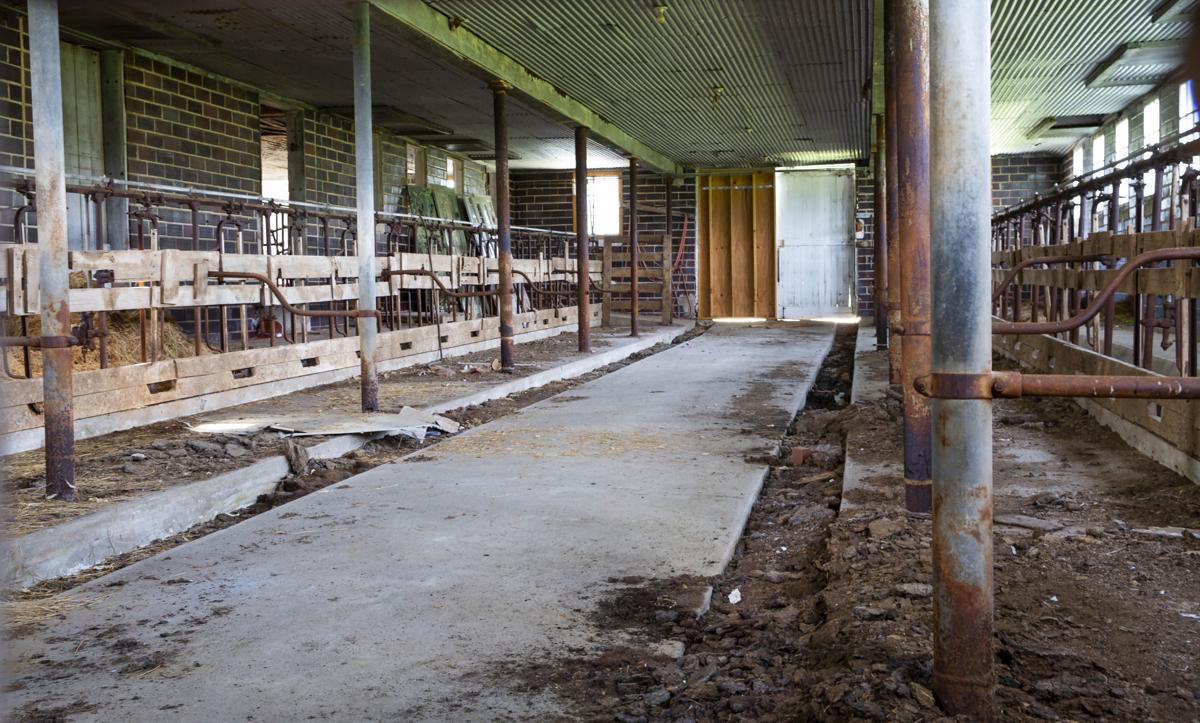 The interior of the old Coble Farm barn, located off Friendly Avenue between Friends Home and Friends Home West, is seen through an opening in the exterior wall. "It's beyond sad," said historian Max Carter about the barn being town down. "The landscape will never be the same."

GREENSBORO — Among those watching the old Coble barn being dismantled this week was Linda Maynard, who played in the barn's loft decades ago with other neighborhood kids.

From her Arcadia neighborhood through the wooded trail to the once-towering white barn visible off West Friendly Avenue, Maynard can point out the old watering hole for the cattle and where they once roamed.

The overarching area nearby has been deemed the city's second heritage community. Warnersville was the first. A photo of the barn is part of the city's online display.

Now, there's a construction fence up along Friendly Avenue and heavy machinery on the property.

"It's one more thing," Maynard, who comes from a long-standing Quaker family, said of the barn and family home on the property joining a list of other historic sites scheduled to be torn down. That list includes the Mendenhall-Blair homestead in High Point, which has ties to the Underground Railroad.

The barn, also one of the last reminders of what had been a large dairy farming community, is being torn down as part of an expansion of cottages and apartments for the elderly.

Friends Homes, the Quaker-affiliated retirement community, has owned the old Coble pasture since the early 2000s.

Officials there have long contended that from the road, the barn is picturesque. But Steven Johnson, who is director of design and construction with Presbyterian Homes, which manages the property, says that's deceptive. Two years ago, as Maynard and others hoped to save the barn, he described it as "a good stiff wind from being blown over."

The second floor, which was never insulated, could be disassembled and relocated using a crane, but the clay-tile walls would fall apart, said Johnson, a former member of the board of directors for Preservation Greensboro.

"It wouldn’t be easy," Johnson said at the time."It wouldn’t be cheap. As much as I'd love to save buildings, we can't financially justify what could be a multi-million dollar restoration."

People did come to look at it, including an architectural salvage company, said Rick Hatch, director of facility services at Friends Home.

"We’ve had I don’t know how many people look at it," Hatch said. "It's not architecturally sound."

It has a backstory that is woven into the history of this country.

As the story goes, German prisoners of war housed at a place called the Overseas Replacement Depot off Bessemer Avenue in the 1940s helped move the milking barn across Friendly Avenue to the Coble family's farm on the other side of the road.

It was 1944 or 1945, and the two Coble brothers often drove to an Army Air Corps base to pick up German workers.

The government paid the prisoners 80 cents a day, per the Geneva Conventions.

"I remember daddy talking about it," Sam Coble, whose family lived in the farmhouse near the barn, said in 2018.

Former News & Record reporter and historian Jim Schlosser interviewed Coble's mother, Ruth, in 2002 before her death. According to his research, about 430,000 enemy POWs were at 510 locations in the United States, about 10,000 of them in North Carolina.

A network of POW branch camps was established including the one in Greensboro.

Schlosser got his details from professor Robert Billinger of Wingate College, an expert on the German POWs in America, who also told him the Greensboro camp had 397 German enlisted men. One American officer and 18 enlisted men were assigned to oversee them.

During their time at the Coble farm, armed guards never followed the POWs.

"They were as nice of people as you would ever want to see," according to Ruth Coble, who fed them.

Young Sam Coble, in overalls, would play with them.

"They were people who had families back home ... and to see a little kid running around, they probably got a kick out of it," Coble said in 2018.

It's part of a larger history lesson for the surrounding land. The Quakers gathered here in the late 1740s before there was a Greensboro or even United States of America.

Fugitives from slavery hid out in the woods nearby while traveling the Underground Railroad.

The property with its barn, silo, rolling hills and a gurgling brook — a Horse Pen Creek tributary — sits right off one of the city's busiest corridors.

"It's beyond sad," said historian Max Carter, "the landscape will never be the same."

The university plans to put new names on Cherry Hall and Morrison Hall in early 2021. Both buildings are named for former North Carolina governors, neither of whom appear to have direct ties to A&T.

The new document calls for expanding the library, building at least two new science buildings and putting up its first millennial campus building.

Pre-K students will have the option to go to school on a daily basis starting Sept. 29, with kindergartners to follow the next week, on Oct. 5.

UNCG gets $2 million for a new full-ride merit scholarship

The donation comes from Tom and Linda Sloan of Greensboro. The endowed fund ultimately will support eight Sloan Scholars at a time.

According to state health officials, there were 87 additional cases reported Thursday in Guilford County, bringing the case total to 8,331.

The CDC reports the United States and its territories have recorded just more than 7 million confirmed and probable cases as of Saturday afternoon.

According to state health officials, there were three new deaths reported in Guilford County Wednesday, bringing the death total to 179.

According to state health officials, there was one new death reported in Guilford County on Friday, bringing the total to 180 deaths.

A work crew removes the roof from the  Coble barn on West Friendly on Tuesday. The historic structure is being torn down as part of an expansion of Friends Home, the Quaker-affiliated retirement community.

The interior of the old Coble Farm barn, located off Friendly Avenue between Friends Home and Friends Home West, is seen through an opening in the exterior wall. "It's beyond sad," said historian Max Carter about the barn being town down. "The landscape will never be the same."