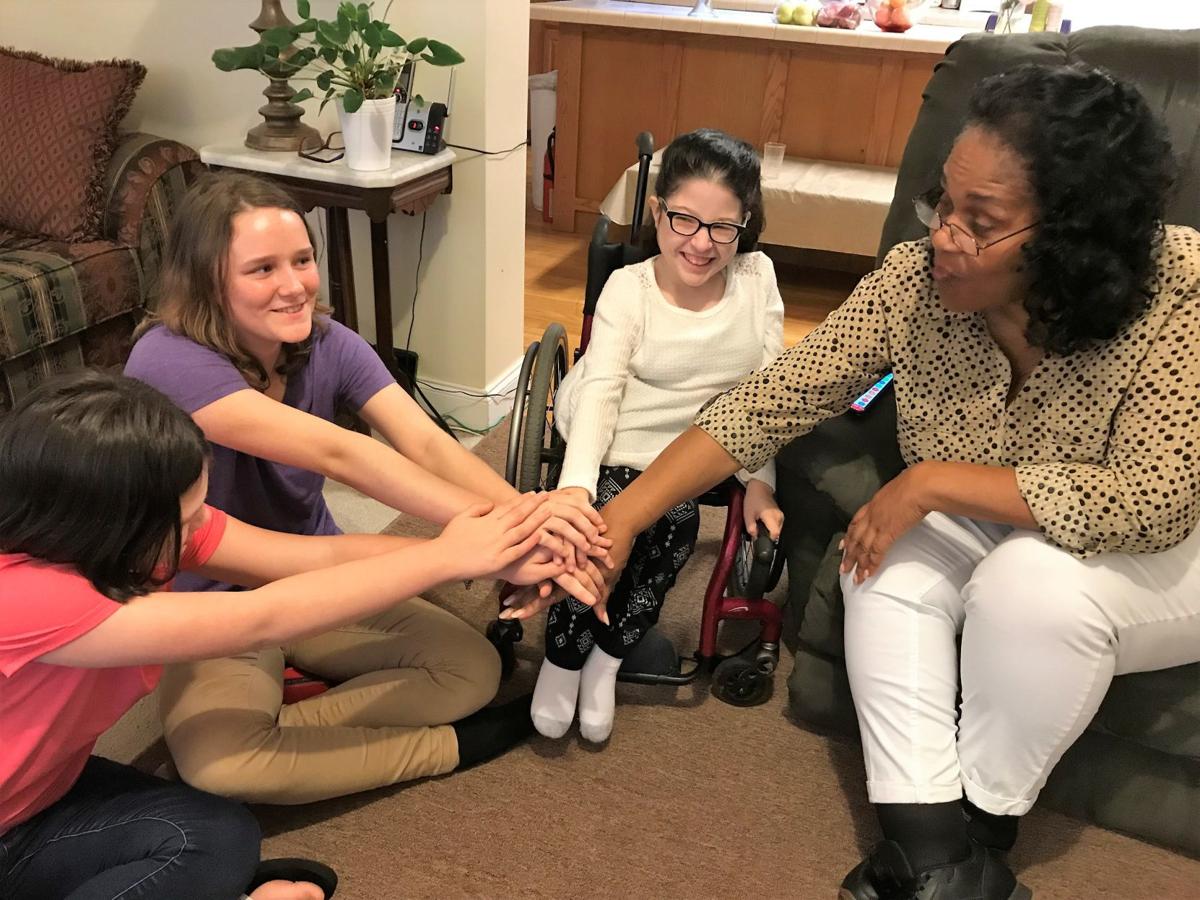 Marie Thomas (right) and her three adopted daughters Jamie (from left), Clarissa and Destiny discuss their game plan for a home and van. 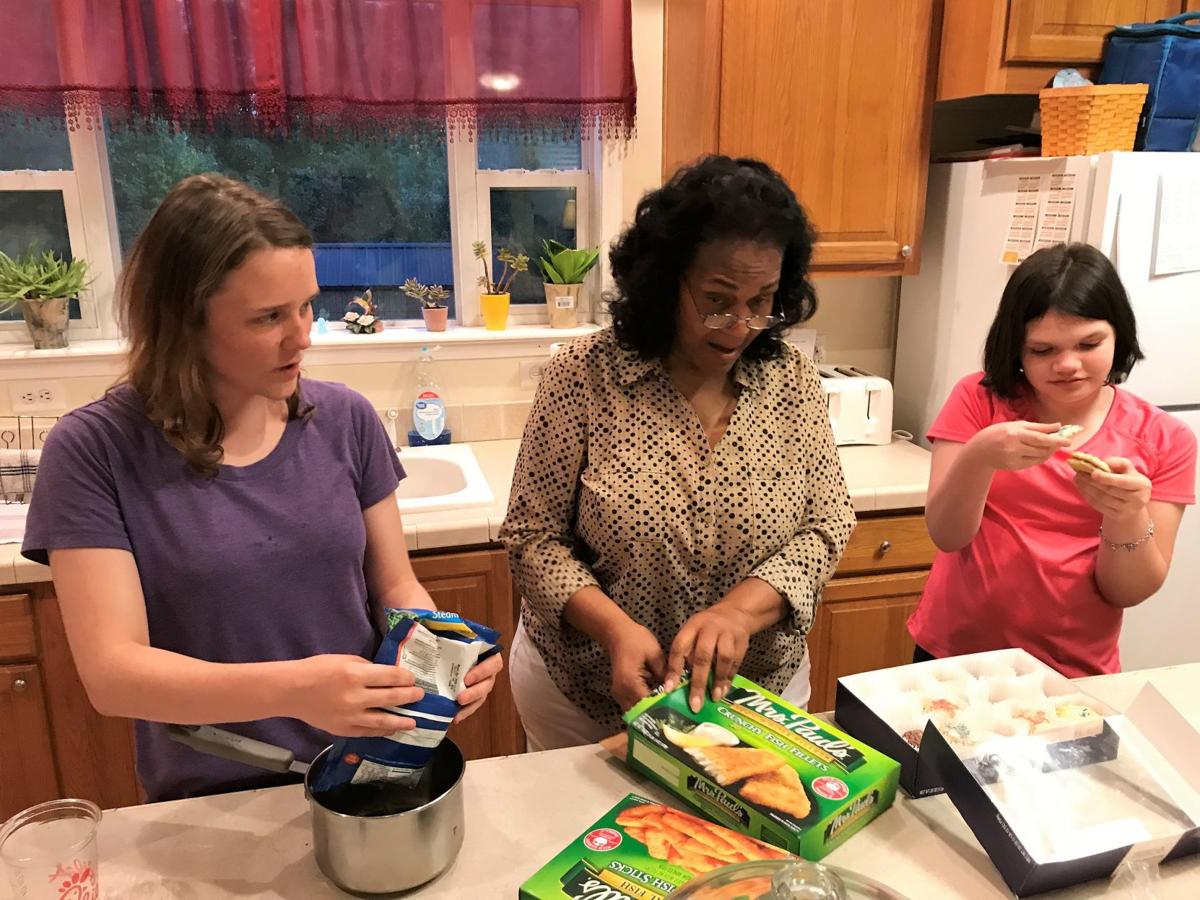 Clarissa, left, and Jamie work with Thomas to prepare a quick Sunday night dinner at their current home outside Reidsville. 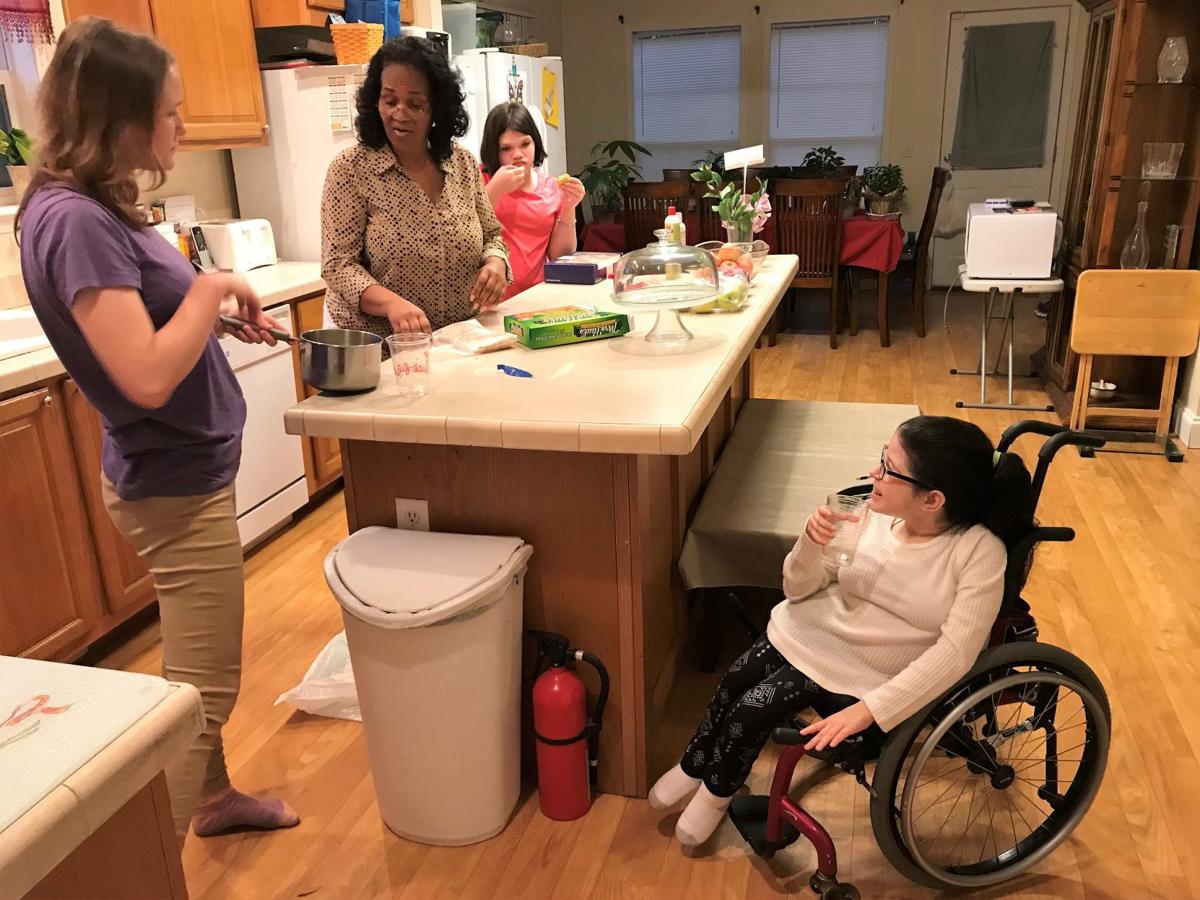 Marie Thomas and her three adoptive daughters prepare a Sunday meal. Thomas has launched a GoFundMe initiative to “Keep Their Hopes Alive.”

Marie Thomas (right) and her three adopted daughters Jamie (from left), Clarissa and Destiny discuss their game plan for a home and van.

Clarissa, left, and Jamie work with Thomas to prepare a quick Sunday night dinner at their current home outside Reidsville.

Marie Thomas and her three adoptive daughters prepare a Sunday meal. Thomas has launched a GoFundMe initiative to “Keep Their Hopes Alive.”

REIDSVILLE — Marie Thomas has been a mother since she was a child.

The eldest of eight, she bathed, rocked and comforted her siblings alongside her mother, Marjorie Pinnix, growing up in Rockingham County in the 1950s.

“I never wanted children,’’ Thomas said with an ironic smile. “I wanted to go off to college, join the Air Force and travel the world.’’

But her life and her faith led her back to caregiving.

Today, after raising six biological children, including two sets of fraternal twins, Thomas, 76, has made a permanent home for three foster children who won her heart.

Inching toward 80, Thomas says she’s in a race with the clock to establish a home and transportation for a trio of young women that will endure long after she is gone.

A foster parent equipped to care for even the most troubled kids, Thomas has helped nurture 14 youths over 13 years.

A few years back, though, she met the first child she would be compelled to adopt — Clarissa.

“Clarissa came to me when she was 7,’’ Thomas said. “She has learning disabilities and emotional and psychological challenges which require medication and therapy. But since she’s been with me, she has really gotten better.’’

Now 16, Clarissa arrived at Thomas’s home in July 2010. She had been expelled from public school and was in poor health.

While she still struggles with behavioral problems, Clarissa said she feels she has a true parent in Thomas.

“This year, she really seems to be turning a corner,’’ Thomas said, smiling at the teen and Clarissa’s adoptive sisters, Jamie and Destiny. “She wrote a short story about her feelings as a foster child separated from her family. I tell her she is smart, she is creative and capable and can do so many things.’’

“I want to be a veterinarian or a poetry writer,’’ Clarissa said shyly.

“Living here, I can say that my mom has actually helped me through tough times. And no matter how bad I’ve been, she still cares and hasn’t let me go.’’

Jamie, 12, who is autistic, also enjoys such a bond with Thomas. She arrived at Thomas’s door in 2015 with acute and chronic health conditions.

In addition to autism, she suffered from Floppy Baby Syndrome, microcytic anemia, nausea and vomiting. Her situation was dire and Jamie could not chew her food or maintain her balance.

“I took Jamie to Burlington to therapy for two years to therapists to let her learn how to eat and walk and become more stable,’’ Thomas said, glancing over to a smiling Jamie.

“Now she understands a lot more than she can verbalize, she is walking normally and she’s healthier.”

Destiny is the third young lady to whom Thomas has made a lifelong commitment.

Now 19, the spina bifida sufferer was placed with Thomas in July 2016. Failing academically, Destiny had many acute health issues, and resisted bonding with her caregivers, Thomas said.

Despite the physical challenges caring for wheelchair-bound Destiny presented, Thomas took on the responsibility with optimism.

But without a handicap transport van, Thomas found herself in a difficult cycle of daily loading and reloading the wheelchair from her lawnmower trailer, getting Destiny to high school and doctor’s appointments.

Even through the exhausting routine, Thomas found a way to build up Destiny’s self image, and convinced her to apply her sharp mind in the classroom.

Thomas also moved Destiny from a high school setting to Rockingham Community College’s GED program where the teen flourished and zoomed through the high school equivalency program in just over five months.

“Mama helped me a lot and reminded me how important school is,’’ Destiny, 19, said, patting Thomas on the shoulder. “I was like, wait, I’m actually wearing a cap and gown for once. I didn’t stop smiling the entire day.’’

Thomas has also helped the young woman participate in an equestrian therapy program in which Destiny competes on Tinkerbell, a miniature horse just the right size to accommodate Destiny’s petite 53-pound frame.

“I’ve won a lot of ribbons and it’s been really fun,’’ said Destiny, who wants to study computer science and find a niche working from home in the IT field.

It was a serious auto accident in April that made Thomas seriously consider her mortality and begin drafting a blueprint for the girls’ future security.

Their two most vital needs: a handicap-accessible van and a house to accommodate them through adulthood.

With a pledge from one auto dealer for a discounted van at $39,000, Thomas said she needs to raise $155,000 to cover the vehicle and a down payment on a house.

A full-time health care worker, who tends to terminally ill elderly patients on night shifts, Thomas calculates that she can swing mortgage payments with such a down payment.

Furthermore, she plans to buy mortgage insurance, so the house will be paid for in the event of her premature death.

By Thomas’s estimate, the plan would leave a home life for the girls they could afford with as little as their combined disability income as adults.

“I’ve got to leave them in a house, so they have a house that’s paid for between the three of them.’’

Smiling, Destiny looked over at Thomas and said, “That’s Mama for you, planning ahead.’’

Susie C. Spear is a staff writer for RockinghamNow.

To make a donation toward Marie Thomas's goal to "Keep Their Hopes Alive," visit the family's  GoFundMe page: www.gofundme.com/f/homewheelchair-van-for-destiny-amp-foster-sisters.