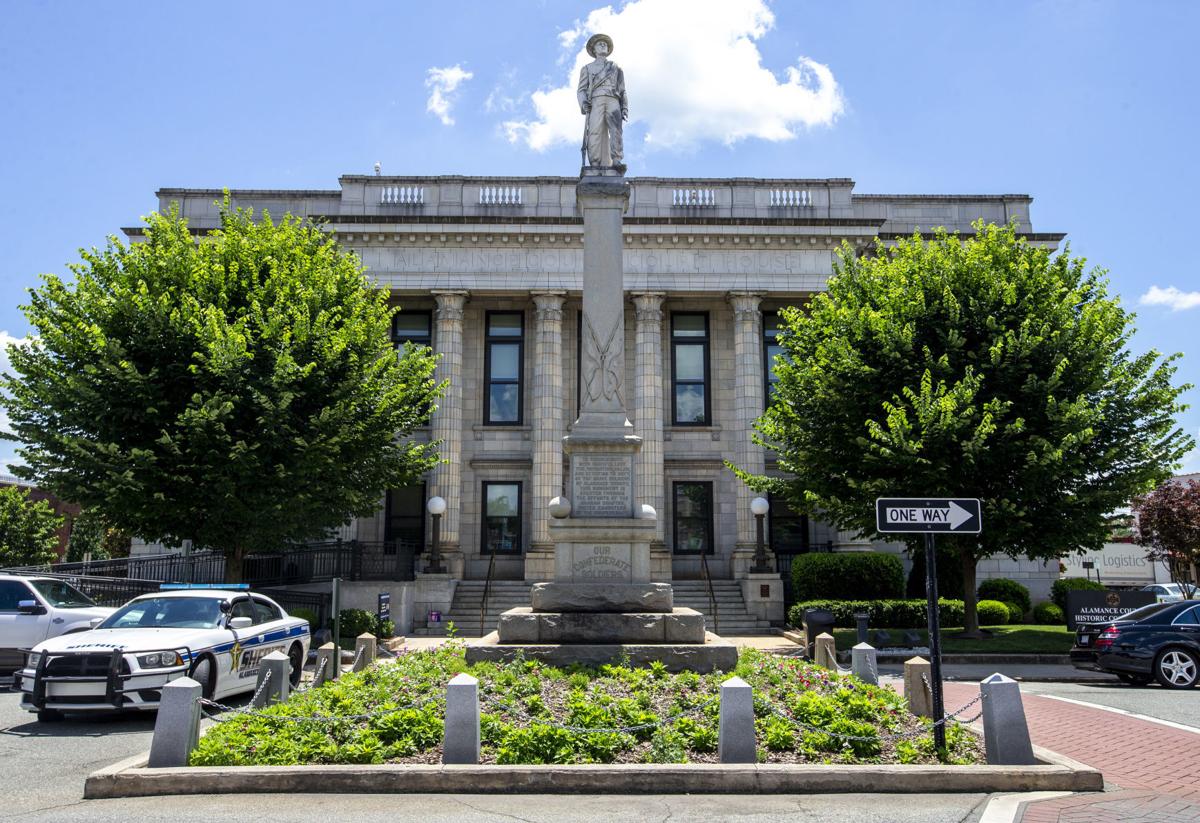 A monument to Confederate soldiers stands in front of the Alamance County courthouse in Graham. 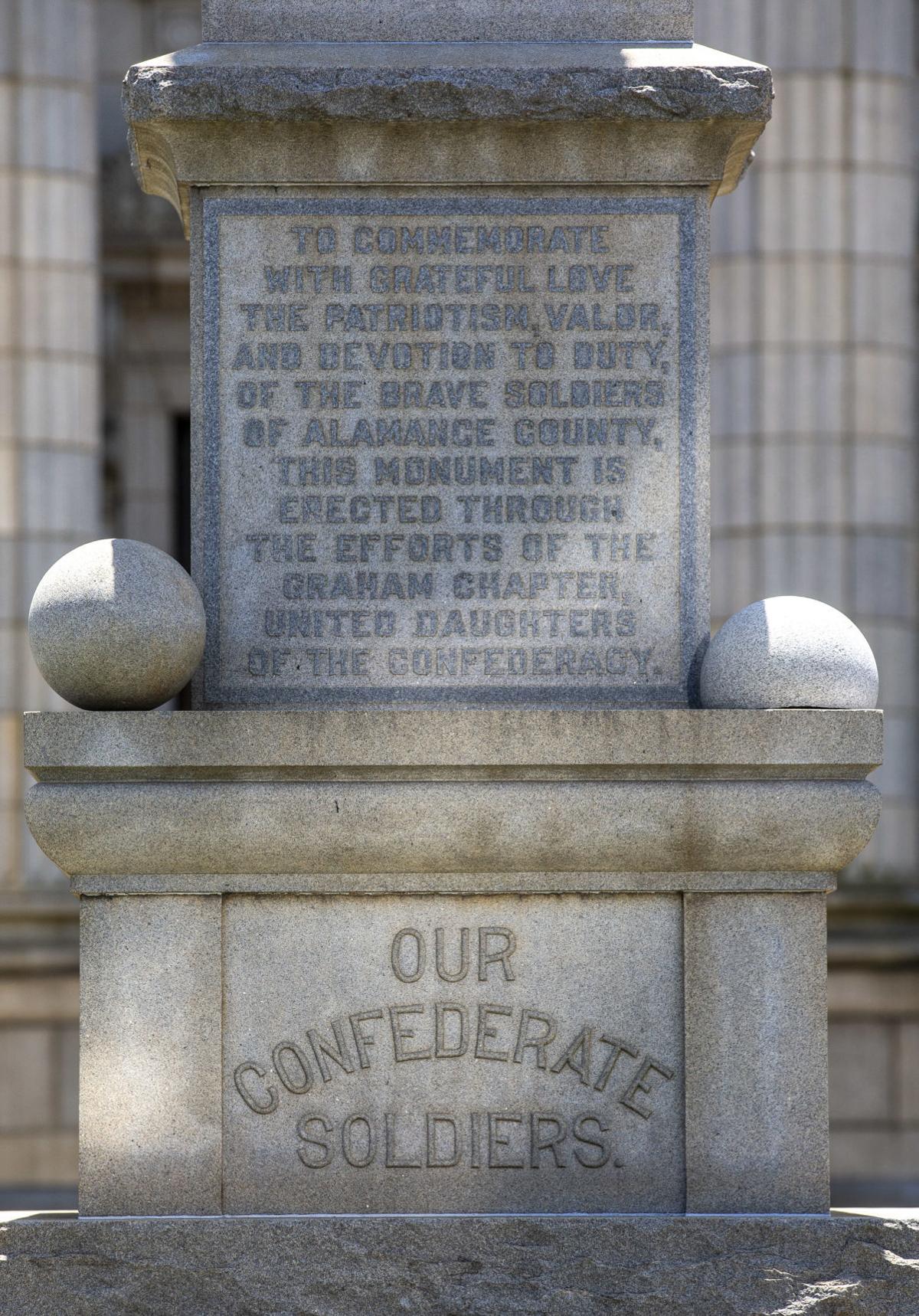 The monument to Confederate Soldiers in the courthouse square in Graham, N.C., on Wednesday, July 1, 2020. 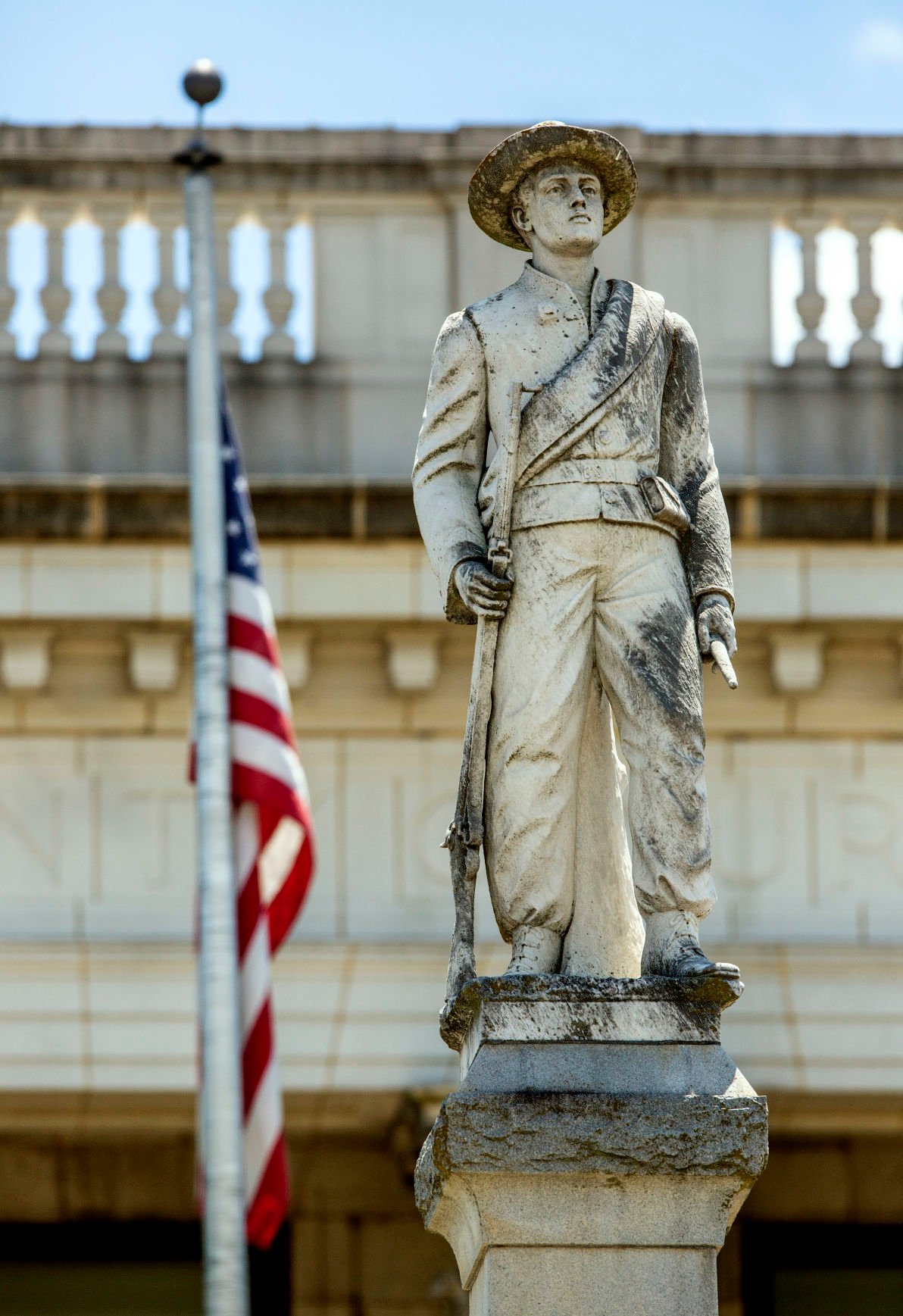 The monument to Confederate Soldiers in the courthouse square in Graham.

A monument to Confederate soldiers stands in front of the Alamance County courthouse in Graham.

The monument to Confederate Soldiers in the courthouse square in Graham, N.C., on Wednesday, July 1, 2020.

The monument to Confederate Soldiers in the courthouse square in Graham.

RALEIGH — A lawsuit filed last week alleges that the city of Graham violated the First Amendment by preventing even a single person from protesting downtown without a permit and also by limiting how groups can protest with a permit.

“The Ordinance unconstitutionally blocks two or more people who wish to protest — and even single individuals who seek to march while carrying a sign — in Graham from doing so without a permit, subjects those seeking a permit to vague and, in effect, content- and viewpoint-based standards, and severely restricts the size and conduct of protests for which a permit is obtained,” the ACLU and others argue in the lawsuit filed Thursday.

The ACLU and the ACLU of North Carolina, the Lawyers’ Committee for Civil Rights Under Law and the Lockamy Law Firm filed the lawsuit in U.S. District Court in Greensboro on behalf of the Alamance NAACP and eight people.

The groups said in a news release they also are seeking a temporary restraining order against the city until a judge can hear arguments for why the local protest rules are unconstitutional. Lawyers’ Committee attorney Elizabeth Haddix said a hearing is scheduled for Monday.

“Peace and justice should belong to everyone, everywhere and all the time,” Barrett Brown, the president of the Alamance NAACP, said in the release. “The city’s permit requirement and periodic protest ban violate our most fundamental rights to peacefully assemble and petition our government for redress.”

Monument protestsThe Confederate monument in front of the Alamance County Historic Courthouse in Graham has been the site of multiple demonstrations since 2015, but calls to bring down the soldier statue dedicated in 1914 have grown in the last month.

At least three people have been arrested, including one man who was arrested June 27 — two days after Graham Mayor Jerry Peterman amended the city’s State of Emergency to withhold permits, shutting down the protests.

Peterman also instituted a curfew, although that did not appear to be enforced once Alamance County sheriff’s deputies and Graham police made the demonstrators leave June 27. Around 9:30 p.m., groups of people were seen sitting on the benches, walking on the sidewalks and skateboarding downtown.

ACLU officials said Graham’s ordinance mirrors a law the U.S. Supreme Court struck down more than 50 years ago that makes it illegal for one person to walk alone or two people to be outside together without a permit for the purpose of “making known any position or thought.”

It gives the government “sweeping discretion to suppress speech based on its content — including on the basis of how listeners are likely to respond,” the ACLU said.

“People have a constitutional right to gather and voice their concerns in public areas without fear of arrest, harassment, or intimidation from law enforcement,” said Kristi Graunke of the ACLU of North Carolina. “It is appalling that Alamance County officials would trample on the First Amendment rights of their own constituents for the sake of protecting a monument to white supremacy.”

The ACLU has filed multiple lawsuits across the country in response to unconstitutional law-enforcement attacks on journalists and protesters, including suing President Donald Trump and other administration officials for the firing of tear gas on protesters outside the White House on June 1.

Although Graham lifted its ban and curfew Monday, Graham police Sgt. R.S. King threatened a lone protester with arrest that evening as she silently stood with a sign on the sidewalk opposite the monument. King also threatened to arrest two bystanders and two journalists from The News & Observer of Raleigh there to observe.

King left shortly thereafter and did not return before the group departed around 8:30 p.m. Sheriff’s deputies remained near the base of the monument.

Demonstrators returned to the square with permits Tuesday and Wednesday, when more than 50 people stood on a corner of the courthouse square. Theresa Draughn of Burlington, who was threatened with arrest Monday, was at Wednesday’s protest and complained about her treatment to Graham police Lt. J.D. Flood.

There was a miscommunication, Flood said, and King, who was just starting his shift Monday, did not know the state of emergency had been lifted.

Police cordoned off an area for Wednesday’s demonstration with orange cones and promptly responded when anyone stepped outside the area. A woman who said the demonstrators were “ignorant” sat at a table roughly half a block away, recording the protest. Two men with her sat in a nearby pickup, also watching.

The demonstrators were supported by scores of drivers and passengers honking horns and raising fists as they drove by. A smaller number of passersby filmed the group as they drove through the circle or raised a middle finger.

The fear of being targeted has kept many people of color away, the demonstrators said.

Triad City Beat reporter Jordan Green said three men at a June 25 demonstration took photos of license plates. He also said he saw a Facebook comment later on the Sanctuary Second Amendment Alamance page that read, “I’m going to follow them when they leave ... and find out where they live. Country boys are going to hunt tonight.”

The page appears to have been taken down.

Tuesday’s protest organizer declined to give his name for fear of retribution. As a Black man who grew up in Alamance County, he said, Graham’s 30-foot-tall Confederate monument strikes him as towering over the square, forcing passersby to look up to it.

The monument, the organizer said, represents a society that fought to keep Black people in slavery and is a reminder to Black people that they better act right or they will be put back in their place.

Graham’s monument was dedicated in 1914 at the height of Jim Crow laws that enforced legal segregation and at a time when Ku Klux Klan members were considered the saviors of the white race.

The courthouse square also is where Klan members hung Wyatt Outlaw, a prominent Black town councilman and police constable in Graham, when he and others challenged them in 1870. The mob was arrested, but the charges were dismissed in 1871. Among them was Confederate veteran Jacob A. Long, the founder of Alamance County’s Klan, who also spoke at the dedication of the Graham monument.

Over 18,000 people had signed an online petition by Friday afternoon asking for the monument to be removed permanently. A separate petition seeking to keep the monument in place had 11 signatures.

Removing the monument is just the first step in changing the conversation, the demonstration organizer said. True change will come when the nation has a president, and not just a Black president, he said, and when Black people feel free and have the freedom to be a strong people.

Tenae Turner, one of the people represented by the ACLU lawsuit, said her right to support Black lives was denied.

“I sought to gather with others to express support for Black lives, advocate for the removal of the monument, and for equally representative government, and I was denied that right.” Turner said in Friday’s news release. “It sends a clear message that racist monuments are valued more highly than Black lives and our constitutional rights.”

Protected by a temporary restraining order, activists return to Graham

Sit-in calls for right to peacefully protest and the removal of Alamance County’s sheriff.