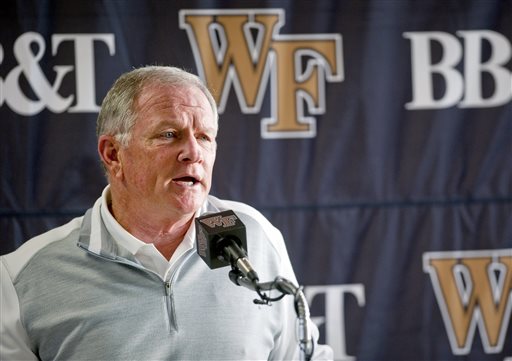 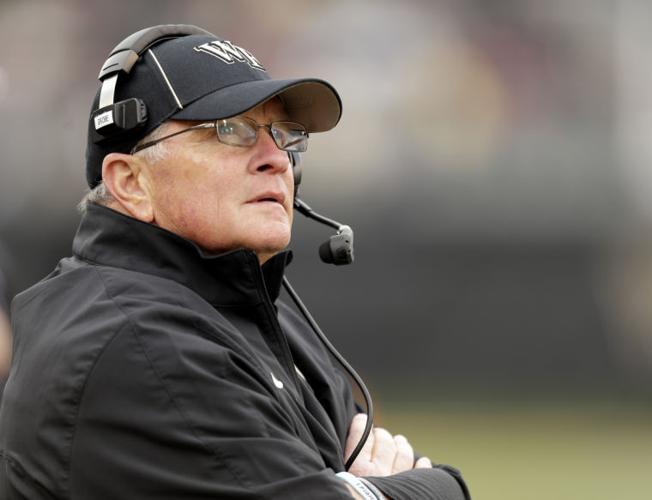 WINSTON-SALEM — Until one sunny day that another “Peahead” Walker or Jim Grobe comes along, the undisputed two greatest football coaches in Wake Forest history will be linked by the school record of 77 victories they share.

Grobe ensured that Monday when he told Wake athletics director Ron Wellman he was stepping down.

He didn’t say he was retiring, instead leaving wide open the possibility he will coach elsewhere. But after 13 seasons, the 77 victories, an ACC championship, five bowl trips and a remarkable 32-11 record against other schools from North Carolina, Grobe’s storybook run at Wake Forest is over.

“When you look back on this 13-year period, it will go down as the greatest 13-year period in Wake Forest history,” Wellman said. “There’s one reason for that, and that’s Jim Grobe.”

After Saturday’s 23-21 loss at Vanderbilt closed the book on a fifth straight losing season, Grobe said he had every intention of being back in 2014. He has three years remaining on a contract that was extended after the ACC championship season of 2006.

“That’s why I’m still here,” Grobe said Saturday. “I’ve had opportunities, but this is my school.”

But by Monday morning, he had determined that Wake Forest might be better served by a new coach.

“These are not things that settle on you until one morning you just kind of wake up and say ‘This is what we need to do.’ ” Grobe said Monday. “Ron and I meet once a week in the season. This morning we just started talking things over and I think we both felt that the direction of the program would be best served to get somebody else in here to see if they can have a new direction and get things going.”

An emotional Wellman, his eyes glistening, said that for all of Grobe’s abilities as a coach, he was an even better man. He described Grobe as a dear friend.

“I love the guy, more than I could adequately express,” Wellman said. “Not only for what he has done for our football program, but also for the relationship that we have.”

Grobe said the feeling was mutual.

“Ron Wellman is my boss, but more importantly he’s my friend,” Grobe said. “And we’ll be friends for life.”

Even so, Wellman said he didn’t attempt to dissuade Grobe from his decision. He said he wasn’t totally surprised, citing various discussions he had shared with Grobe during the past five years while the Deacons went 5-7, 3-9, 6-7, 5-7 and 4-8 — making Grobe the only current coach in the NCAA’s football bowl subdivision with five straight losing seasons.

“When Jim makes a decision, it’s final,” Wellman said. “And out of respect for him, I knew it was final. There’s no wavering at all.

“He had made his mind up, and I felt that would be disrespectful to him if I tried to talk him into doing something that he obviously does not want to continue doing at this point here anyway.”

Grobe was known to be fiercely loyal to his coaching staff. Both he and Wellman maintained there were no conditions set — such as firing an assistant coach or restructuring the staff — for him to remain at Wake Forest.

“Ron Wellman and I are friends and we will remain friends forever,” Grobe said. “That’s not ever going to change. So there’s no hidden stuff going on here. There’s no ulterior motive or anything like that.”

Wellman said that a search for Grobe’s successor will begin immediately, but that no timetable has been set for finding a coach. Grobe said he didn’t expect anyone from the current staff to be considered.

“I think it’s tough if you haven’t been successful to pull somebody out of the program and expect them to take over,” Grobe said. “I rely on my coaches to have their own ideas, but it’s kind of been Jim Grobe’s program. So going forward I think Ron would be looking for a change.”

As for Grobe, he said his time at Wake has been consumed with trying to win games. But he didn’t sound like a man ready to leave a profession he has pursued for 36 years. A 1975 graduate of Virginia, he took his first job in coaching as an assistant at Emory & Henry in 1978. He turned 61 on Feb. 17.

“Once you’re a coach, you’re always a coach, and you want to keep coaching,” Grobe said. “So that’s kind of my direction right now.”

WINSTON-SALEM — Wake Forest coach Jim Grobe has resigned after 13 seasons at the school.

Grobe announced his decision this afternoon at a news conference.

"I don't know what the future will hold for me," Grobe said. "Once you're a coach, you're always a coach and you want to keep coaching."

"I feel like Ron (Wellman, the athletics director) will hire somebody good and it will be good for our guys."

He was 77-82 with the Demon Deacons and shares the program record for coaching victories with D.C. "Peahead" Walker.

The unquestioned highlight of Grobe's career came in 2006. He was named the AP national coach of the year after leading Wake Forest to its first Atlantic Coast Conference championship since 1970, winning a school-record 11 victories and earning a berth in the Orange Bowl.

That was the second of his five bowl games with the school, and the first of three straight from 2006-08 — the only time the Demon Deacons have reached the postseason in three consecutive years.

But it was tough to sustain that level of success at a school that has the smallest enrollment of any member of one of the six major BCS conferences.

The Demon Deacons capped off their fifth straight losing season last weekend with a 23-21 defeat at Vanderbilt. Wake Forest ended the season 4-8, including five losses in a row.

Wake Forest finished 113th or worse nationally in four of the five main offensive stat categories, and its offense effectively disappeared once receiver Michael Campanaro broke his collarbone in a loss at Syracuse on Nov. 2.

The Demon Deacons managed just one touchdown in a span of 10 quarters coinciding with that injury, and those offensive struggles undercut a defense that held nine of 12 opponents to 24 or fewer points.

In what turned out to be Grobe's final home game, Wake Forest gave No. 20 Duke a scare before losing 28-21.

Grobe's successor faces a tough challenge because most of the key players from this year's team — including quarterback Tanner Price, running back Josh Harris, nose tackle Nikita Whitlock and Campanaro — were seniors.

WINSTON-SALEM – Jim Grobe, the chief architect of the most successful run by Wake Forest football in the ACC era, is expected to step down as the Deacons’ head coach today.

A media conference has been scheduled for 4:15 at Deacon Tower. A source familiar with the Wake Forest football program said that Grobe will announce his resignation then.

Grobe, 61, concluded his 13th season at Wake Forest with Saturday’s 23-21 loss at Vanderbilt, which left the Deacons 4-8 and ensured a fifth-straight losing season. He remains tied with Peahead Walker for the most victories at Wake Forest, with 77.

In 2006, Grobe coached Wake Forest to its first ACC title since 1970 and second ever. The Deacons beat Georgia Tech 9-6 in the conference championship and lost to Louisville 24-13 in the FedEx Orange Bowl. Grobe was named national coach of the year by the American Football Coaches Association, The Associated Press and other organizations.

Clawson, the head coach at Bowling Green, will be introduced to the media and to Wake Forest fans this afternoon.

Jim Grobe steps down as football coach at Wake Forest