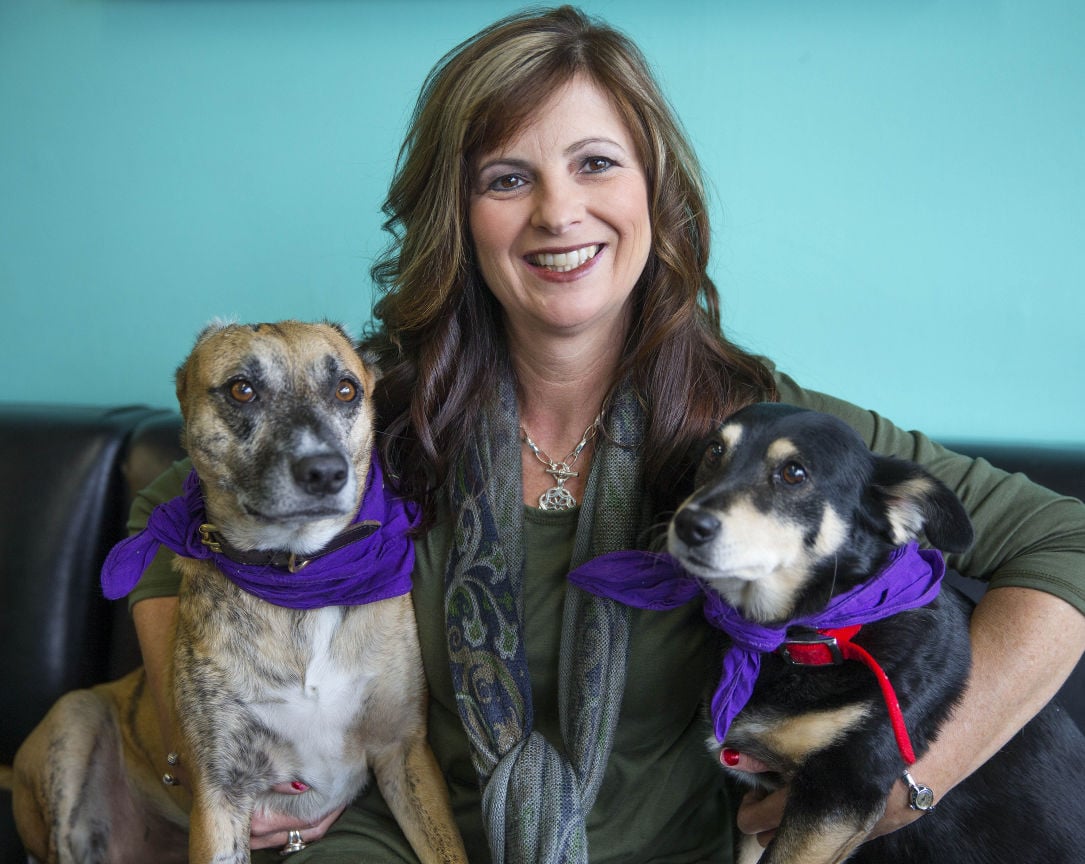 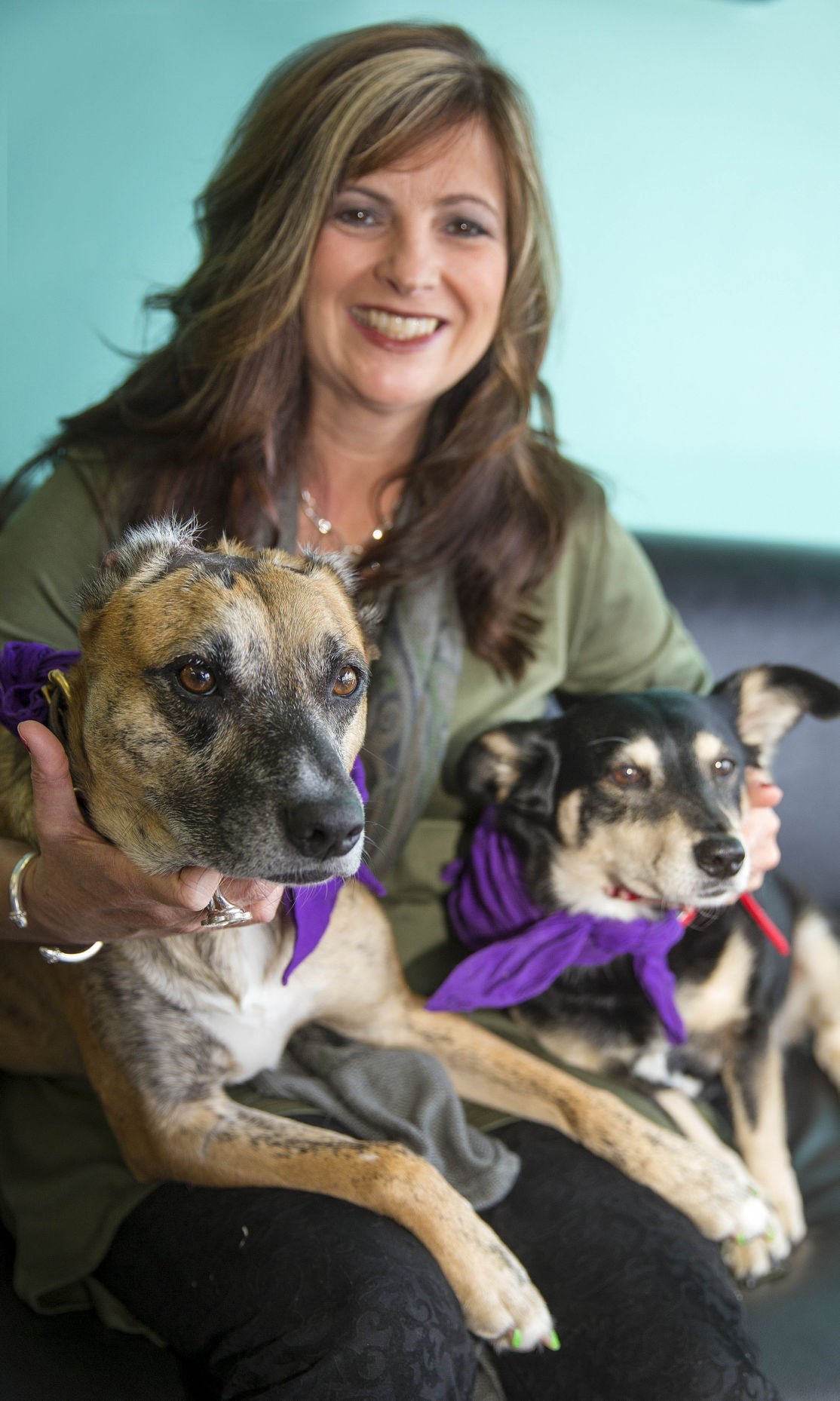 GREENSBORO — When Donna Lawrence wakes up every day, she rubs her dog’s head, feeling the scars that run from her skull all the way down her back. Hair won’t ever grow there, and

Susie, the pit bull mix with the big brown eyes and brindle coat, will always have stubs for ears.

“It reminds me what I’m in this for,” Lawrence said. She’s referring to her campaign against animal abuse, which

began when she adopted Susie.

Since Susie’s Law went into effect four years ago today, 1,506 charges of animal abuse and 257 charges of intentionally starving an animal to death have been filed against residents statewide, according to data provided by the Administrative Office of the Court.

Because of Susie, those offenders now can serve jail time for animal abuse and neglect.

But it didn’t stop there.

Susie is now an international star. A nonprofit to prevent animal cruelty, a medical fund for the Guilford County Animal Shelter, three books and a movie all bear her name.

Susie’s is a story that invariably moves people. The dog was only 8 weeks old when she was beaten and then set on fire by her owner after she licked his newborn baby’s face.

When Susie was found in Greenfield Park some 10 days after the attack, her jaw and some of her teeth were broken. Her ears had been burned almost completely off, and the wounds on her head and back were filled with maggots.

Susie’s case struck at the heart of the community. Some 60 people, including Lawrence, signed up to adopt the puppy.

Lawrence had scars of her own, both physical and emotional. Ten months earlier, the avowed dog lover had been attacked and severely injured by an abandoned pit bull. Still dealing with the trauma and a newfound fear of dogs, Lawrence felt an affinity for the abused puppy.

“I was drawn to her because of what she went through and what I went through,” Lawrence said.

Lawrence was fostering Susie on the day she learned that she would not be able to have children. The shock of the dog attack had thrown her into early menopause. In tears, she watched Susie playing gleefully in the next room. She said God spoke to her in that moment.

“Susie wasn’t living in the past, and I wasn’t supposed to live in the past, either,” Lawrence said. God said he had big plans for her, and those plans included Susie, Lawrence recalls.

Adopting Susie eventually turned Lawrence into a full-time advocate for animal rights, starting with Susie’s Law. When the community learned that Susie’s owner could be charged only with a misdemeanor under state law, the dog became the face of a campaign to strengthen animal abuse laws.

Susie’s Law makes it a Class H felony with possible jail time to abuse and torture an animal or intentionally starve it to death.

Don Vaughan, then a state senator, was a leading advocate for Susie’s Law. Vaughan said getting the law passed was one of the highlights of his tenure

in the N.C. General Assembly.

Susie’s paw print is inked alongside the signature of then-Gov. Bev Perdue on the text of the bill.

“It’s a great teaching tool on how to take a concept with some wonderful people behind it and take it to where it becomes law,” he said. “It’s a great example of people who bound together in common cause.”

Vaughan was impressed by how Susie, who was a guest at both lectures, went around the classroom to greet each student individually.

“She would go from student to student like she was shaking hands,” he said.

Vaughan’s only concern is that many prosecutors across the state may not know that they can use Susie’s Law to put animal abusers behind bars. He hopes that in the next session, the General Assembly will take up laws on puppy mills and chaining of dogs.

“Susie’s case created great awareness, but I still see statewide many cases of animal abuse continuing,” Vaughan said. “And I’ve not seen a great groundswell of laws like Susie’s Law in other states.”

Lawrence hopes to change that by using the Hero Dog Award as a national platform to increase awareness of animal abuse.

She founded the nonprofit Susie’s Hope to promote awareness of animal abuse. As a trained therapy dog, Susie visits schools and other gatherings to teach children and adults about proper respect and care for animals.

Lawrence has written three books about Susie, one of which became the basis for the movie,

“Susie’s Hope,” which tells the story of how Lawrence and Susie helped each other to heal.

As a result of the movie, Susie’s story now has been featured on morning television shows in Germany and Australia.

“Susie and I can’t be everywhere, but the movie can,” Lawrence said.

Lawrence actually sold her hair salon last year so she could devote more time to the crusade against animal cruelty. She now works at the salon part-time, adjusting her hours around the appearances with Susie.

Susie will be making lots of appearances across the nation in the coming year as the official Hero Dog, which will allow Lawrence to promote awareness and education on a larger scale.

“It’s a compelling story, and I hope it will motivate people to do something for animals in their area,” Lawrence said. “What I’d really like to see is a

national movement that could help bring about stronger laws.”

Australia lost one-third of its koalas in three years

Australia lost one-third of its koalas in three years

According to the release, the clever dogs figured out how to unlatch the door at their home.