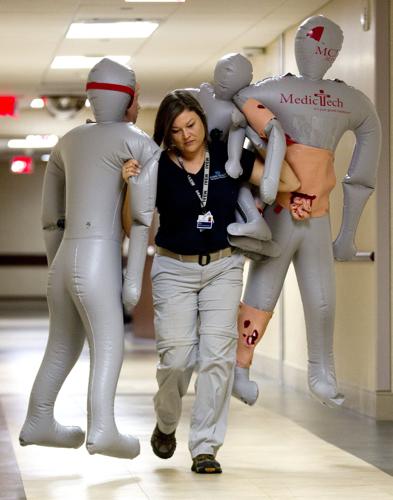 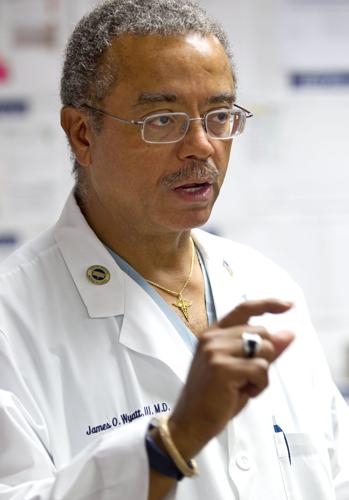 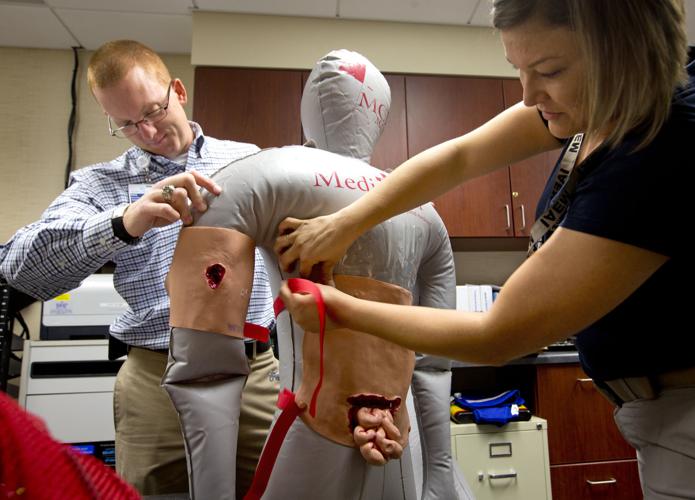 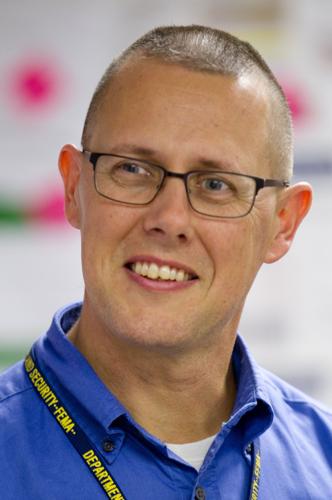 GREENSBORO — This time, the catastrophe is an explosion at an imaginary chemical plant that spews some caustic substance on about 50 people.

The victims of various ages also have suffered an array of physical injuries ranging from gaping abdominal wounds to broken limbs and head injuries.

At a moment’s notice, they’ll be brought to Moses H. Cone Memorial Hospital in a staged, “mass casualty” event today aimed at readying doctors, nurses and other emergency workers for the real thing.

“We’re going to move the ‘patients’ through the Emergency Department all the way up to where they would be admitted,” said Scott Supernaw, Cone Health System’s emergency management coordinator who is supervising the exercise.

Today’s 7-hour test run is one of as many as 18 such events of varying size and complexity that the hospital system conducts each year in different parts of its multi-county operation, Supernaw said.

The real thing, of course, would be different from any of these contrived sessions because reality always looks, feels and smells different from make believe.

“It’s the only thing we can do,” said Wyatt, who leads a staff of about 20 surgeons. “We certainly don’t want to learn by just jumping into the fire of an actual catastrophe. It can happen anywhere at any time as we’ve seen, unfortunately, multiple times.”

The hospital will continue functioning as usual today for current patients and their families, and staff members involved in today’s simulation can break away immediately if needed in real life, Supernaw said.

Other agencies taking part in today’s exercise include the Greensboro Fire Department as well as both city and Guilford County emergency management staff.

From the Orlando night club killings to the recent unrest in Charlotte, hospital and other emergency workers never know what kind of crisis they might face, under what sorts of circumstances.

So the planners of each exercise try to throw something new or different into their simulations. They learn of unexpected complications and obstacles by speaking with their colleagues in other communities that have faced these crises, Supernaw said.

Today’s exercise will include the need to decontaminate victims before they can be treated, under the assumption that some or all have been splattered by whatever toxic substance was involved in the explosion at the fake chemical plant, he said. It could be anything from gasoline to fertilizer.

The volunteer “victims” include students in nursing and emergency response programs, augmented by inflatable mannequins with plastic injury patches affixed to them.

To make things as realistic as possible for the participants, Cone is calling on the talents of famed, Snow Camp makeup artist Starr Jones to create real-looking wounds on today’s victim impersonators, the same type that Jones has created for dozens of movies and hundreds of TV episodes. Jones’ credits include “Day of the Dead,” “Star Trek,” “Mortuary” and “The Abyss” among many others.

“It’s going to look really cool when it’s done,” Cone emergency preparedness specialist Ben Wooten said of Jones’ handiwork. “It’s nice to be able to use a local person with such talent.”

Women’s Hospital was the scene of the most recent, major drill that the emergency preparedness team staged, Supernaw said. That effort in May focused on evacuating the hospital’s neonatal, intensive care unit full of vulnerable infants.

The closest the hospital system came this year to actually putting its practice sessions to the ultimate test was about six months ago, when there was a massive crash on the interstate near Mebane involving a bus and 130 other vehicles.

“We ramped everything up here to receive them,” Supernaw said. “We were prepared, but we didn’t receive any.”

It will all be fake and everybody taking part will know that, really, they’re just practicing.

But they’ll also be well aware that tomorrow, the next day or some time next year, who knows?

Nature has no need for a calendar.