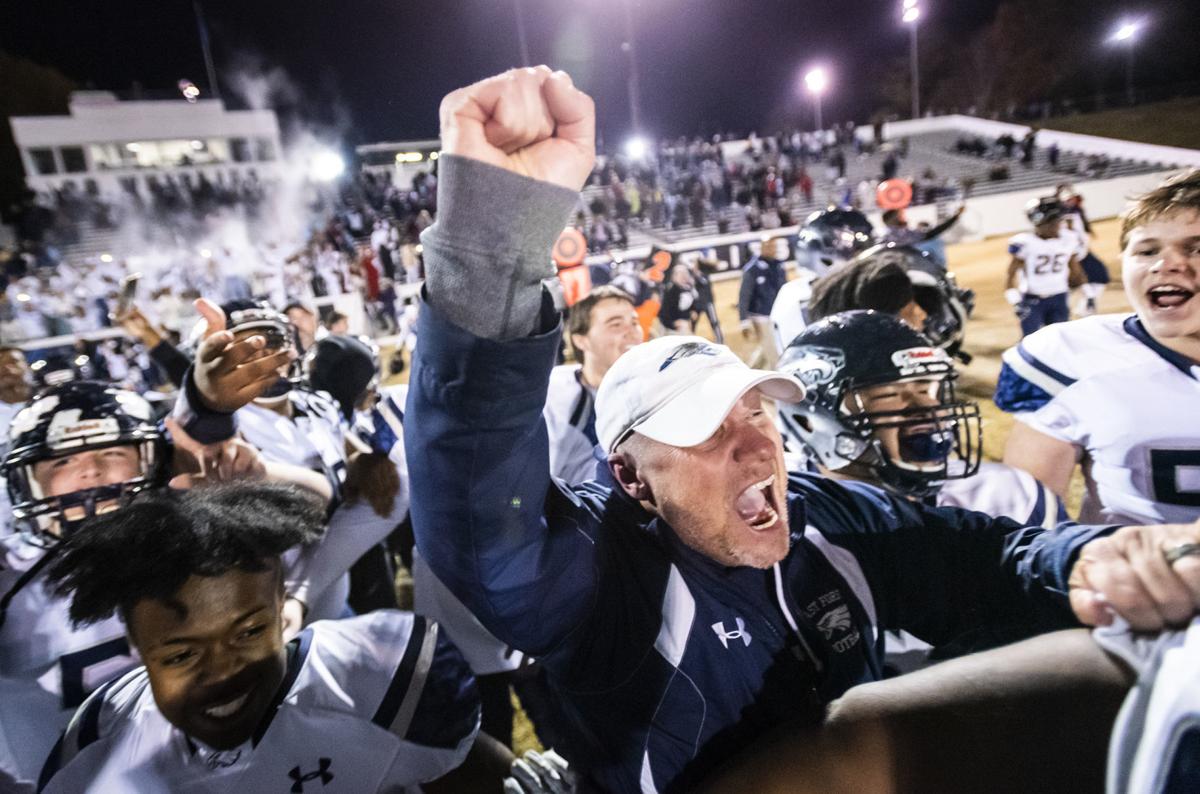 East Forsyth coach Todd Willert, celebrating his Eagles' 21-20 victory over Grimsley in the 2019 NCHSAA Class 4-A Western Regional championship game, says his proposal to potentially offer a fifth year or ninth semester of high school is "about this Class" of 2021. “My thing is if we can’t realistically play in the fall and we set it up for the spring, but it doesn’t get better in the winter — it gets worse or it stays the same — we need to have one more plan,” Willert says. “That’s why I came up with this.” 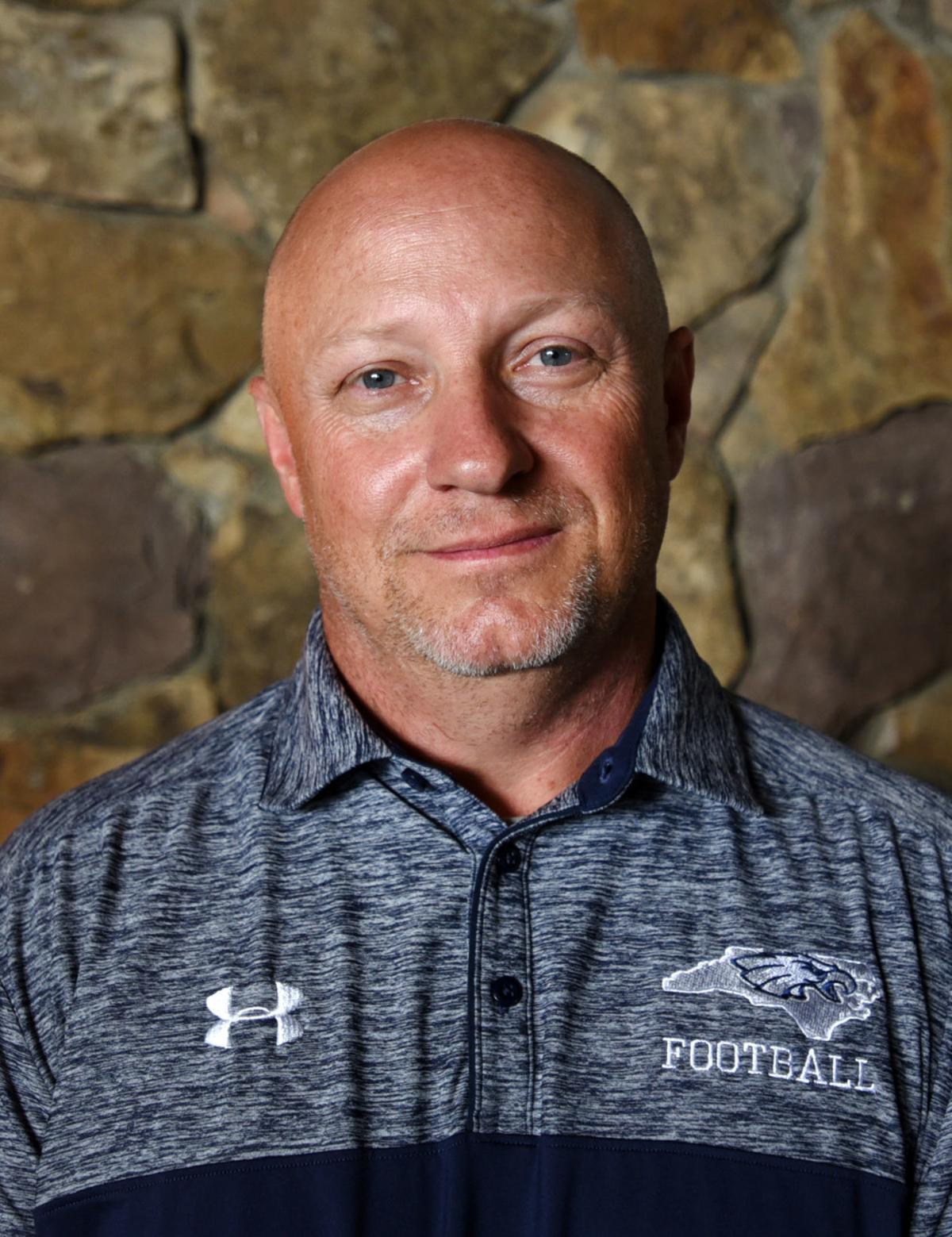 Area high school football coaches were almost evenly divided when we asked them whether they would prefer to try to play the 2020 season in the fall amidst the COVID-19 pandemic or postpone it to the spring. But one coach offered a bold idea to address what happens if reopening schools on a limited basis results in another spike in positive tests and we can’t play high school sports in the fall or have any extracurricular activities during the 2020-21 school year.

Todd Willert, East Forsyth’s longtime football coach, would like to see seniors be offered an additional semester — or an additional two consecutive semesters if no activities are held during the school year — to participate in athletics or other extracurriculars in 2021-22.

“My thing is if we can’t realistically play in the fall and we set it up for the spring, but it doesn’t get better in the winter — it gets worse or it stays the same — we need to have one more plan,” Willert says. “That’s why I came up with this.”

Under Willert’s proposal students would be granted the opportunity to take online classes through a four-year or community college, as some do now in early or middle college programs, while participating in athletics or other activities at the school where they were enrolled as seniors. They would first have to complete the 2020-21 school year in good academic standing to maintain their eligibility for the additional semester or year of athletics.

• The State Board of Education would have to raise the age limit for athletics by one year from 18 to 19. The Aug. 31 cutoff date for aging out of eligibility would stay the same under Willert’s proposal.

• The N.C. High School Athletic Association’s board of directors would have to waive its rule that students are only eligible to compete in athletics for eight consecutive semesters once they begin high school.

Willert, whose Eagles have won the last two NCHSAA Class 4-A football state championships, proposes that the changes to those rules be a one-time waiver with the current rules reinstated for the 2022-23 school year.

Willert says he’s talked to “over 20 coaches” about his idea. Some were enthusiastic, some were skeptical. But some of the skeptics “called me back the next day and said, ‘Talk to me a little more about this.’ ”

Willert isn’t proposing an extra year of eligibility to try to keep a strong roster intact. He knows that Division I commitments Micah Crowell (N.C. State), Jaden Lindsay (Appalachian State) and Ty Lyles (Coastal Carolina) probably aren’t coming back for an additional year of high school football. He is proposing it because he’s worried about his players and about rising high school seniors and other students across the state of North Carolina.

Willert knows he doesn’t have all the answers, but he wants to try to find at least some of them.

“I had a leadership meeting with eight of our kids last week where they were asking me questions,” the coach says, “and I broke down on that Zoom meeting because I had to tell them, ‘I don’t know.’ It was probably the first time you’ll hear a coach say that, because otherwise I’d say, ‘I might not know, but I will find out for you.’ ”

That wasn’t the toughest part of the conversation for Willert, though.

An opportunity to take some college courses could open up possibilities for some students. The fact that the classes would be online and not physically in the school would mean that already-crowded facilities would not be stretched further.

“People might be thinking you’re going to have 300 people come back to school,” Willert says. “That’s not going to happen, I promise you. … But let’s give them an option.

“It’s what can we do for these kids. COVID has changed things, so we need to change things and help these kids. Let’s give them hope, because when you don’t have hope anymore things can get scary.”

“I’m talking all extracurricular activities: Band, theater, all the different after-school clubs,” Willert says. “If kids didn’t want them, we wouldn’t have them, so it’s clear they’re needed.”

With any proposal as radical as what Willert says he is offering as a “Plan C” there would be challenges, such as funding, but he believes it’s worth trying to overcome them. For the students.

We find ourselves in a time that will change history. We have never really faced these new challenges in front of us. However, as educators and the voice of the future I truly believe we need to look into doing things that have never been done. Extraordinary times call for extraordinary actions. We have to help the Class of 2021 and give them options and hope. High school and extracurricular activities mean so much, and I believe a lot of us have forgotten how much they meant to us. Our students must be given hope and choices, and that means thinking outside the box and doing things that have not been done before.

I propose an option of giving the Class of 2021 a choice of having a fifth year/ninth semester if the 2020-21 school year is affected by COVID-19. Yes, it has never been done before, but we have never been affected by a virus quite like this one. Please keep an open mind and do not make it harder than it really needs to be. As educators, it is our job to adqpt and adjust. However, the BIGGEST mission is to give hope and direction. The Class of 2021 needs YOU!!!

The News & Record granted 22 area high school football coaches anonymity and asked if they would prefer to: