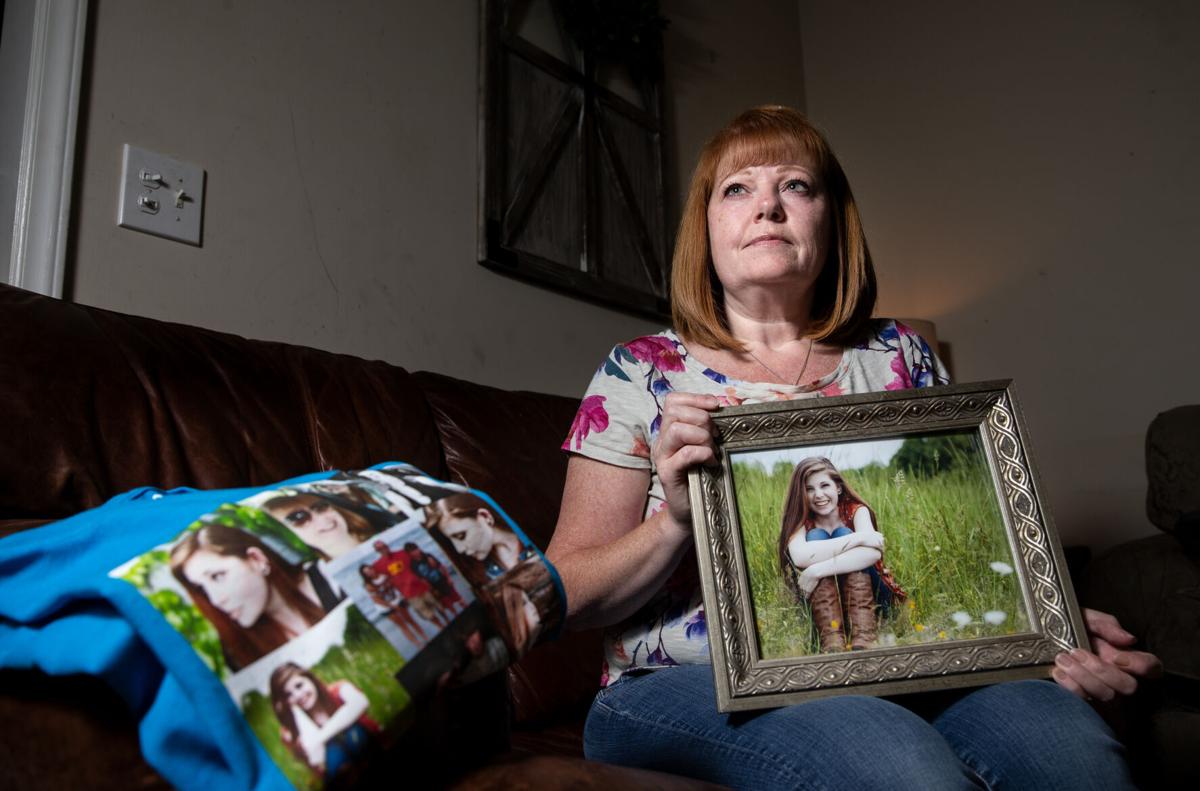 Caroline Drake poses with a portrait of her daughter, Kaitlyn, who died at the age of 24 from a drug overdose. Kaitlyn had been in rehab and was sober, but the COVID-19 pandemic struck and cut her and her family off from vital services. 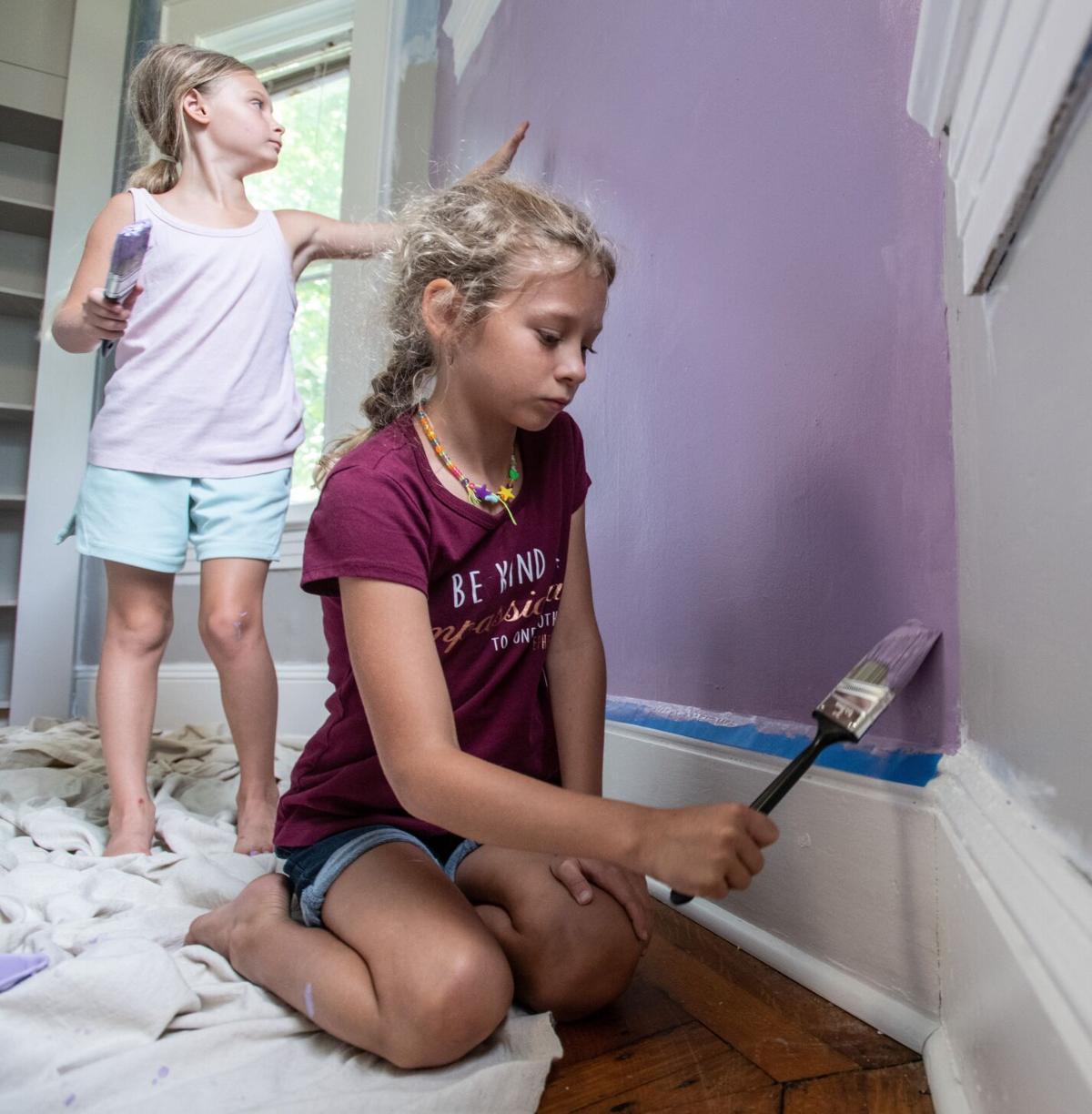 Lilly Dixon, 9, front, and Kyleigh Lawrence, 7, paint around the trim as volunteers paint the inside of Kaitlyn’s House, GCSTOP's new home in High Point, on Saturday. 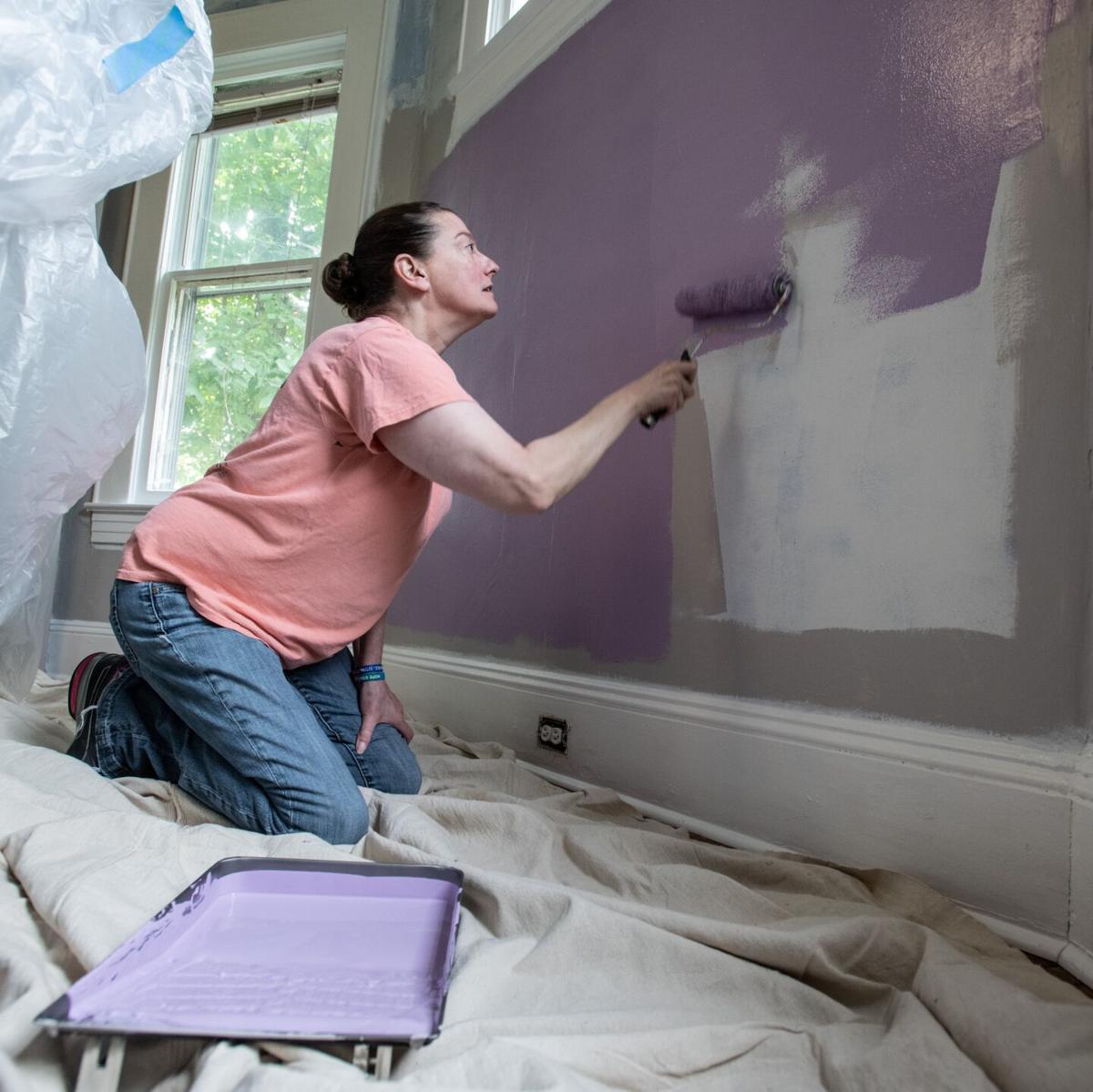 Wendy Mendenhall paints a wall purple as volunteers paint the inside of Kaitlyn’s House on Saturday. 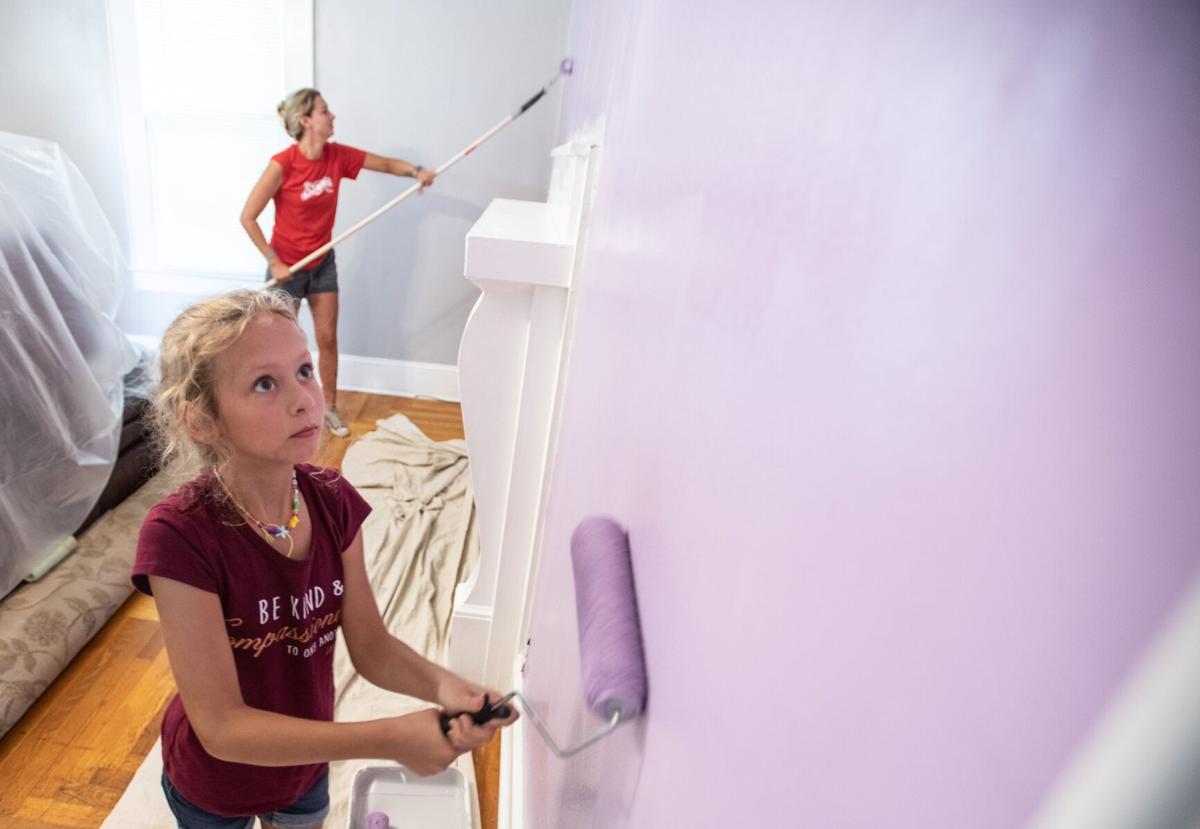 Lilly Dixon, 9, in front and her mom Arianne paint as volunteers paint the inside of Kaitlyn’s House, GCSTOP's new home in High Point,  on Saturday. 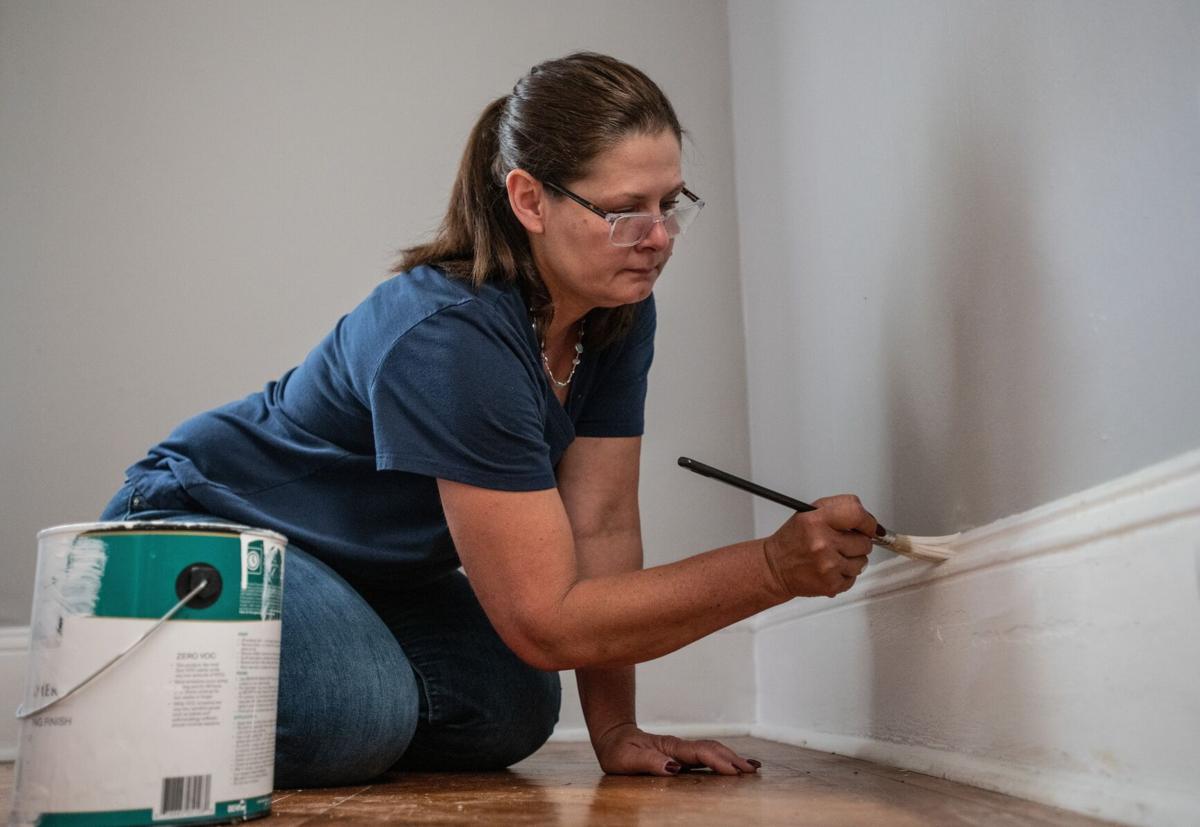 Kim Locklear paints the trim as volunteers paint the inside of Kaitlyn’s House, GCSTOP's new home in High Point.

GREENSBORO — Nearly a year after her daughter’s fatal overdose, Caroline Drake continues to find ways to honor her oldest child.

There are small reminders, like having her nails painted purple — Kaitlyn’s favorite color.

Then there are more permanent reminders: the tattoos she, her husband and son now have with the words from one of her daughter's tattoos.

But there are reminders she never saw coming — and one in particular. It's a house to help those struggling with substance abuse, named after Kaitlyn.

"I never dreamed of something like this," Caroline said.

Kaitlyn, 24, died on July 29, 2020 — almost two weeks after overdosing on heroin laced with fentanyl at home.

Prior to the tragedy, Kaitlyn was regularly attending Narcotics Anonymous meetings after getting sober for the second time in less than the year.

But like so many, the COVID-19 pandemic hindered her recovery. Meetings went virtual. Kaitlyn struggled to connect.

In an interview just days after her daughter's death, Caroline called the in-person meetings and socialization Kaitlyn's "lifeline." In addition to Narcotics Anonymous meetings, her daughter was also involved with a group known as GCSTOP — Guilford County Solution To the Opioid Problem.

"She talked about them all the time," Drake recalled. "Back then, even when she was in active addiction, I knew she was involved with them."

GCSTOP performs community outreach to overdose victims in and around Guilford County. The group also runs a syringe-exchange program, providing clean syringes and supplies to people who struggle with substance abuse. On the surface, that can appear to some like the organization is enabling a person's drug use.

But it's more than that as Drake discovered. Back when she first learned about her daughter's struggles, Drake said she and her husband thought of GCSTOP as "being part of the problem."

"But I was just uneducated about their mission," Drake said.

That mission — to keep people doing drugs as safe as possible while they're still using — is something Drake now fully embraces.

"Even in her recovery, Kaitlyn told me a lot about what GCSTOP did and that she was still volunteering there," Drake said. "She had kind of won me over at that point."

In the months following her daughter's death, Drake spent most of her time outside, sitting on the deck of her Greensboro home. Once, early on, feeling a need to do something "normal," she went to the grocery store.

She ran into a neighbor who hadn't heard about Kaitlyn's passing. The neighbor asked how Drake and the family were doing. It was the first time Drake had to tell someone about her daughter's death.

"I couldn't get out of there fast enough."

Drake kept her routine simple while she grieved. Each day, she set this goal: Get up. Take a shower. Get dressed.

Then head out to the deck.

"That's where I was seeing my butterflies," Drake said, "and all of these things that reminded me of her. I guess I felt more connected to her out there."

Time passed. Cooler weather arrived. She would have to go inside.

As the days grew shorter, Drake said she started thinking more about GCSTOP.

"They meant so much to Kaitlyn, and they always gave her a safe place to be, whether she was in recovery or not," Drake said.

Not looking to gain anything from it, she reached out to staff on Facebook and introduced herself, expressing her appreciation and telling them how much they meant to Kaitlyn.

Among those Drake messaged was Chase Holleman, a program coordinator for GCSTOP.

Drake's message was "powerful," Holleman said. It stuck with him.

Shortly after reaching out to Holleman and others, Drake saw a GCSTOP post on Facebook requesting donations for Thanksgiving. She sent a message to Tyler Yates, GCSTOP's coordinator for the syringe-exchange program, and asked how she could help.

Food was needed, and when Drake attended a large Thanksgiving event that yielded a huge amount of leftovers, she took it their way.

It was after Thanksgiving that she began meeting regularly with Yates, Holleman and another staff member, Guillermo Tremols. She developed a bond with all three — incidentally, the same three men her daughter volunteered alongside and admired.

During their first sit-down, Holleman said they talked almost exclusively about Kaitlyn. It became apparent to Holleman that Drake wanted to help and find a way to be involved, much like her daughter.

"She fit seamlessly into what we do without much effort," Holleman said.

It wasn't long before GCSTOP staff told Drake they would like to find a way to honor Kaitlyn. They floated a few ideas, including a possible scholarship.

But then Caring Services, an organization that provides treatment to those seeking recovery, told GCSTOP about a house soon to be available in High Point.

Almost immediately, GCSTOP approached Drake and asked if they could name the house after her daughter.

"When they offered that," Drake said, "that was more touching than anything. When we met, I was just thankful they were letting me be as involved as I was. Part of me thought it was just them saying, 'Hey, this mom wants to be involved.'

"But then they offered this. I never dreamed it could be something like this."

Kaitlyn's House is set to be GCSTOP's headquarters.

The nonprofit has operated out of a basement in College Park Baptist Church for several years, oftentimes going mobile to offer services in the High Point area. The organization will hold onto their location at the church, Holleman said, but Kaitlyn's House is likely to be a more relaxed environment — a better place for conversations that can lead a person toward recovery.

So far, Holleman said traffic for GCSTOP has picked up "tremendously" in High Point since establishing Kaitlyn's House. People don't only come to GCSTOP for their syringe exchange program. They also want to be counseled and to be in an environment free of judgement.

"It's a safe space," Holleman said.

And though GCSTOP aims to serve those most at risk of overdosing, people in need of a place to recharge are welcome to stop by and use the home's shower, laundry machines and kitchen.

"I think what this house will really be has yet to be seen," Holleman said.

Caroline Drake has visited the house several times, helping to paint and organize. In the entrance above the mantle sits a picture of Kaitlyn.

Drake said she often wonders what her daughter thinks, seeing her becoming friends and volunteering alongside the very staff that became such an important part of Kaitlyn's life.

"It gives me a lot of comfort to be around people who knew her so well," Drake said. "People that knew the good and the bad.

"They loved her for who she was. I really see that now."

Anyone interested in donating to Guilford County Solution to the Opioid Problem can visit the group's website and click on the "Donate" button. To donate directly to Kaitlyn's House, mail checks to 102 Chestnut Drive, High Point, NC 27622. Checks should be made payable to Caring Services Inc. with GCSTOP in the memo line.

Despite COVID-19 and logistical woes, Tokyo 2020 to be the most inclusive Olympics

The man who's been the face of FaithAction may be leaving, but mission remains

Caroline Drake poses with a portrait of her daughter, Kaitlyn, who died at the age of 24 from a drug overdose. Kaitlyn had been in rehab and was sober, but the COVID-19 pandemic struck and cut her and her family off from vital services.

Lilly Dixon, 9, front, and Kyleigh Lawrence, 7, paint around the trim as volunteers paint the inside of Kaitlyn’s House, GCSTOP's new home in High Point, on Saturday.

Wendy Mendenhall paints a wall purple as volunteers paint the inside of Kaitlyn’s House on Saturday.

Lilly Dixon, 9, in front and her mom Arianne paint as volunteers paint the inside of Kaitlyn’s House, GCSTOP's new home in High Point,  on Saturday.

Kim Locklear paints the trim as volunteers paint the inside of Kaitlyn’s House, GCSTOP's new home in High Point.