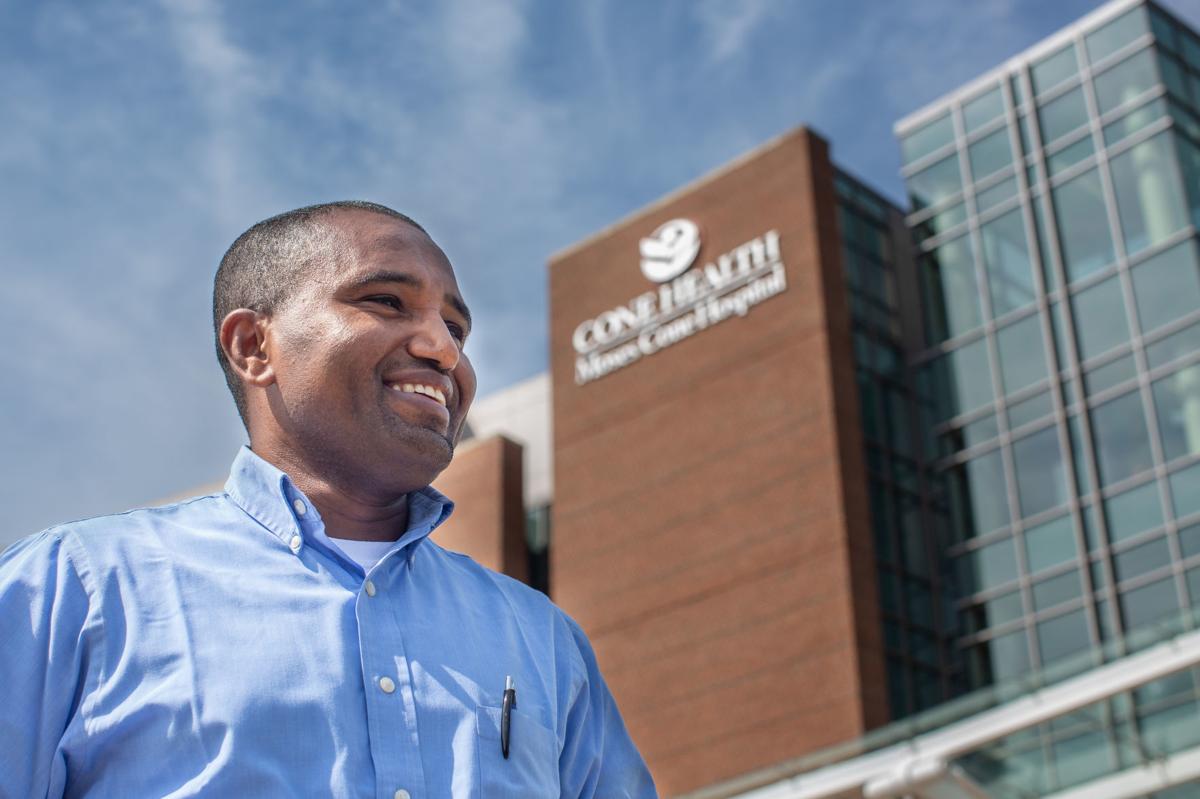 Dr. Taye Gonfa poses for a portrait at Moses Cone Hospital in Greensboro on Friday. 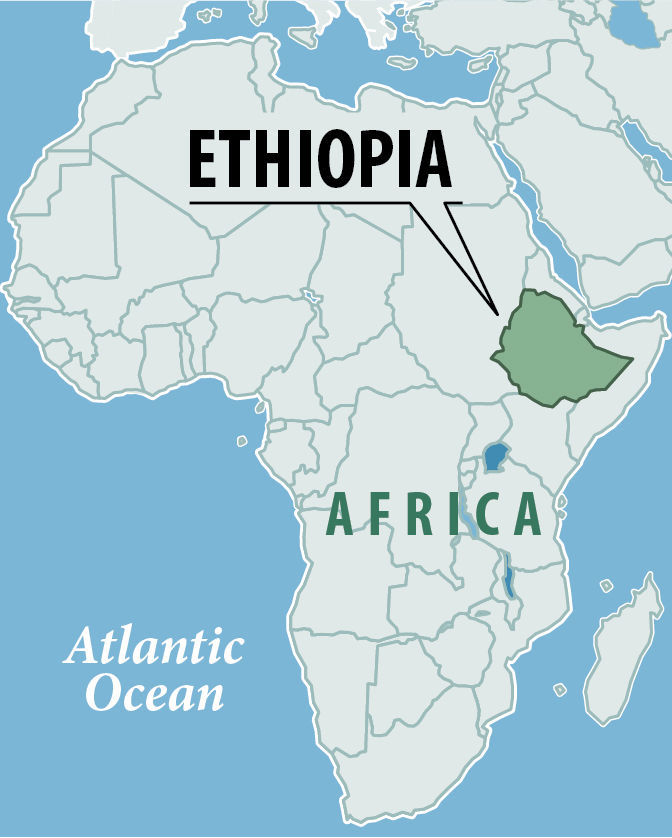 Dr. Taye Gonfa poses for a portrait at Moses Cone Hospital in Greensboro on Friday.

GREENSBORO — As a young boy, Taye Gonfa wanted to fly the planes that he often spotted above the family's hut in Ethiopia.

His aspirations were only as far as he could see, which was a world otherwise steeped in poverty.

But there was his mom — unschooled and very pregnant with him when her husband drowned in a flooded river trying to get home from work — wanting so much more for him. She would be the first of many whose guidance would eventually lead him down the sterile hallways of Moses Cone Hospital — with "Dr. Taye Gonfa" on his badge.

"He’s been very fortunate to have some doors open up for him," said Dr. Bill Hensel, who was on the selection committee that offered Gonfa a residency at the hospital. "But don't underestimate the fact that he has made his own luck and run through those doors."

Gonfa, who arrived in the United States a decade ago and turns 38 this year, hopes he is leaving footprints for his two children and other refugees, especially, to follow.

"I got to this point," he said, "because I did not stop chasing my dream."

The first time Gonfa would be on one of those planes he had seen as a boy was the flight to New York and then Greensboro as part of the United Nations refugee resettlement program.

"I figured, 'Why not?'" said the quick-witted and affable Gonfa, who speaks English with African and British influences.

In 2000, during his second year in the program, he joined hundreds of other students in a massive protest against the government that erupted in the capital city of Addis Ababa, and spread throughout the country.

"The next day," he said, "I went to my college library and tore the Ethiopian and Kenyan maps out of the world atlas."

Gonfa and some of the other students used them to flee to nearby Kenya where the rebels had settled.

Soon after crossing the border, he was arrested, turned over to a United Nations official and taken to a refugee camp in northeastern Kenya.

In the camp, where Gonfa would be confined for the next eight years, he had shelter — and a ration of grain.

"There was never enough food," he said.

One day while taking a friend to the camp's infirmary, he mentioned to the physician on duty from Doctors Without Borders about having started his second year in medical school before joining the rebellion. As the two continued to talk, the doctor suggested he apply as a volunteer in the infirmary, which came with a stipend of $50 a month.

"That was huge," Gonfa recalled.

Gonfa was a marvel in the infirmary where most of the medical support staff had elementary or middle school education at best.

Soon, he was delivering babies.

"You watch what the doctors do and then you do it," Gonfa explained.

While 95 percent of the people in the camp were Muslims, Gonfa was a Christian. Despite that, he had to overcome suspicions and cultural barriers.

"Those people who thought I was not one of them started to change their opinions about me," Gonfa said.

With time, his work became more of a passion than just a means of survival and extra pay.

And his desire to get back to medical school grew stronger. He had found a purpose.

By then, he had met his wife, Abebanesh Awulachew, also a refugee in the camp. His next door to a new life would open through her.

"Whatever she does, she gives it 100 percent," Gonfa said.

For years, Awulachew was a housekeeper for the officer in charge of the camp. In 2007, when she gave birth to their daughter and had to stop working, the officer wanted to see the baby and invited them to stop by her home. As they chatted, Gonfar mentioned medical school and his work alongside Doctors Without Borders. The woman took a special interest in their case.

"It could have been a different fate," Gonfa said.

Although that got their resettlement application moving, the mandatory background checks and screenings would take another year and a half before they were issued tickets to America. Sponsored by the Greensboro-based North Carolina African Services Coalition, they arrived in December 2008.

A few days prior to leaving Kenya, Gonfa was in an orientation class and heard the facilitator say something he has never forgotten. He called America "the land of opportunity."

"From that day on, I had only one question: How could I get back to medical school?" Gonfa recalled.

The first morning in Greensboro, he got up, dressed in his new home off East Market Street and then pulled out the city map he found in a telephone book that had been thrown at his door. He began walking toward downtown.

"I'm scared about spending money," Gonfa said of the moment. "We have to eat. We have to pay our bills. I have a kid."

That morning, Gonfa stopped at businesses along the way, asking if there were job openings.

At the Barnabas Network — a nonprofit that helps needy families — he's told there are no paid positions, but volunteers are needed. So he signed up.

Someone told him jobs were available at Lorillard just down the street.

"I applied for every job they had," Gonfa said.

As a result of volunteering with the Barnabas Network, he was given a bus pass which enabled him to expand his job search.

Later, while applying for a job at Walmart, he met a pharmacy manager whose parents immigrated here.

"He had a good understanding of what being a refugee meant," Gonfa said.

The manager liked his attitude and willingness to learn, and gave him a job.

The position wasn't a good fit. It required computer skills Gonfa hadn't acquired yet. So the pharmacy manager assigned him to work the register, and patiently taught Gonfa how to ring up orders.

Soon, he got a second full-time job working the overnight shift at a gas station not far from his home.

In between, he took English and computer classes.

One day he decided to stop by UNCG's biology department for some guidance. He found Robert Cannon, an associate professor who has for decades advised students wanting to go into medicine — and ended up getting more than two hours of his time.

"He just filled me with positive energy," Gonfa said.

Cannon encouraged him to get his college records from Ethiopia. Luckily, Gonfa knew someone back there who could send them.

With credits from the school, Gonfa was able to graduate with a bachelor's of science degree from UNCG in just two and a half years, and was later accepted into the medical school at UNC-Chapel Hill.

That put him one more step closer to realizing his dream.

Gonfa, who by then had become an American citizen and was father to a second child, applied to Cone Health for his residency because he wanted to remain in the community he came to love.

While working at Moses Cone, his supervisors took note of his care with patients, especially those here as refugees.

When his residency was over and he graduated this spring, Gonfa wanted to stay with Cone Health.

"What a blessing to have someone with his medical skills and compassion ... caring for our patients," said Hensel, who runs Cone Health's family medicine program.

Next month, he starts a full-time job as a family practice physician. Gonfa hopes to volunteer with Doctors Without Borders in the future.

"I still think about those people in the refugee camp," Gonfa said. "When I decided to go to medical school, I wanted to be like those doctors I worked with."

He also realizes he didn't get here alone.

"I've had many guardian angels," he said.

Cone Health hospitals have been recognized as High Performing Hospitals for by U.S. News & World Report.