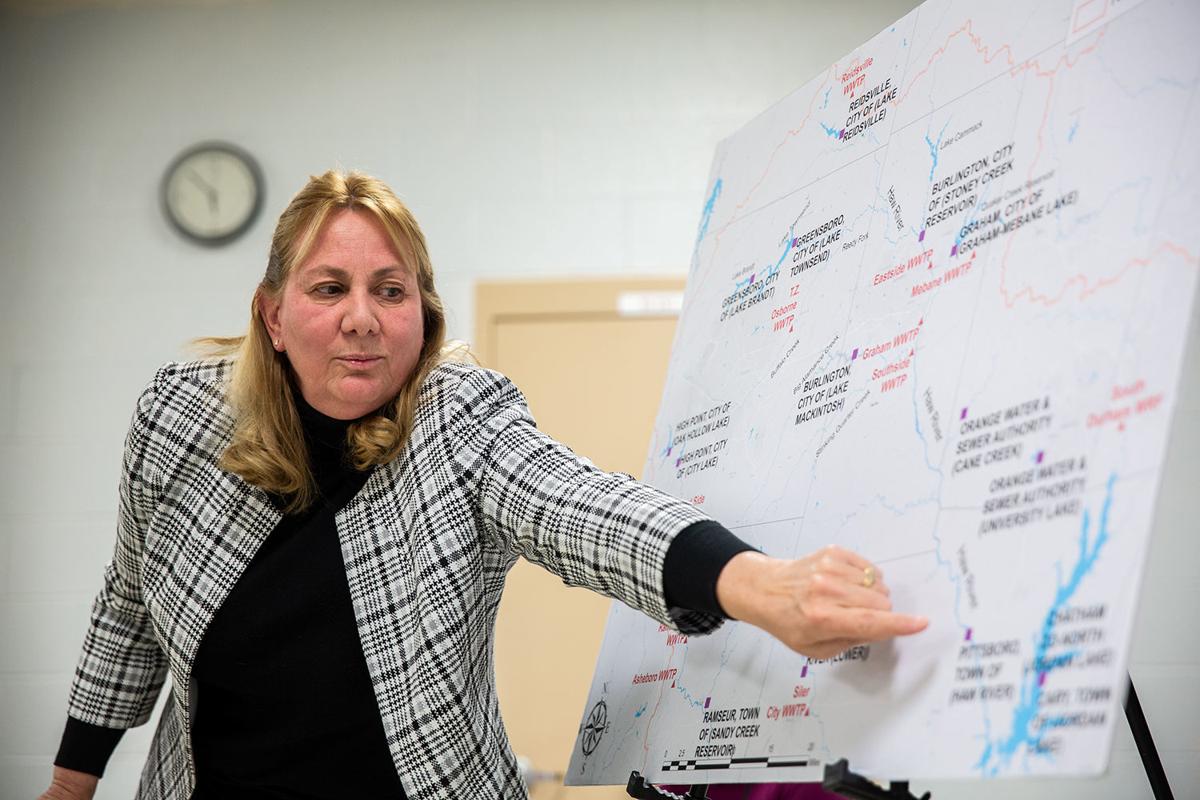 Julie Grzyb points to a map at Craft Recreation Center in Greensboro on November 20, 2019. State legislators from Guilford County hosted a public meeting on recent sewage releases of the industrial chemical 1,4-dioxane, a suspected carcinogen. 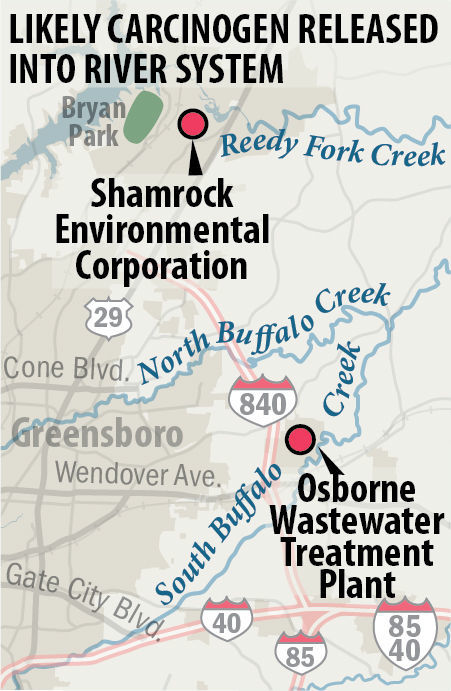 Julie Grzyb points to a map at Craft Recreation Center in Greensboro on November 20, 2019. State legislators from Guilford County hosted a public meeting on recent sewage releases of the industrial chemical 1,4-dioxane, a suspected carcinogen.

The agreement between city government and the state Department of Environmental Quality imposes a $5,000 fine and a two-year improvement plan to combat local problems with the industrial chemical 1,4-dioxane, a suspected carcinogen.

The proposed “special order by consent” authorizes additional fines for excessive amounts of 1,4-dioxane in any future discharges from the plant on South Buffalo Creek.

And it commits the city to keeping levels of 1,4-dioxane in wastewater from the Osborne plant to 60 parts per billion (ppb) during the agreement’s first year, and 35 ppb during the second.

“EPA has issued a health advisory for 1.4-dioxane recommending concentrations not to exceed 35 (ppb) in drinking water as protection of a 1-in-10,000 excess estimated lifetime cancer risk,” the proposed settlement notes, referring to the United States Environmental Protection Agency that sets such safety standards.

1,4-dioxane is a heavily-used industrial and commercial chemical found in a variety of manufacturing processes and such household items as shampoo, body wash and cosmetics.

It is clear in color, mixes readily with water and has a smell sometimes described as pleasant.

Greensboro’s own water supply does not have a problem with the chemical. But Greensboro’s wastewater plant is one of several in the Cape Fear River System, including Reidsville and Asheboro, that have been flagged for excessive releases of 1,4-dioxane affecting other downstream communities’ water supplies.

Last year, state DEQ hit Greensboro with a “notice of violation” for an August 2019 release from the Osborne plant with 1,4-dioxane content of 957.5 ppb — about 27 times higher than the EPA’s health advisory.

The proposed agreement would resolve that notice, which also included a citation for failing to tell state officials quickly enough about the problem.

Last summer’s crisis actually was caused by an unnamed customer of Shamrock Environmental Corp., a waste handling company with a facility in Browns Summit that received the contaminated liquid from a client who did not disclose its presence beforehand.

That situation should not happen again, Shamrock indicated in a written statement earlier this week.

“In the fall of 2019, we acquired and installed state-of-the-art technology to treat emerging contaminants found in a diverse range of manufacturing processes and consumer products,” the company said in response to a reporter’s request for an update.

Shamrock said it had spent “millions of dollars to investigate sound treatment technology” for the class of emerging contaminants that includes 1,4-dioxane.

The company also voiced approval of the proposed special order, adding that “we support the increased monitoring and reporting measures outlined in the consent agreement.”

The city got tagged with a violation for the August 2019 release because it holds the permit from state government for discharging treated household, commercial and industrial wastewater into the creek, a Haw River tributary within the larger Cape Fear system.

As permit holder, the city must answer to state government for everything that goes into the creek from the Osborne plant, located on Huffine Mill Road in McLeansville.

After state officials issued the violation in November, the city Water Resources Department responded as the process requires by submitting its version of a corrective action plan, said Elijah Williams, manager of the city Division of Water Reclamation that includes the treatment plant.

It took months of praiseworthy work by his staff, Williams said, to negotiate the final proposal with DEQ giving city officials time to identify additional sources of 1,4-dioxane along the system’s hundreds of miles of piping and then reduce their discharges of the chemical.

“1,4-dioxane is in a lot of different products so we’re trying to get a full understanding of where it’s coming from,” Williams said. “That’s the whole purpose of this study.”

The city has been on alert for 1,4 dioxane since 2015 but it has been difficult to pinpoint all major sources, he said. That’s due in part to its status as an unregulated contaminant known to harm human health, but not yet subject to mandatory limits set by the EPA.

So local officials lack the wealth of background data about 1,4-dioxane that exists for more established pollutants and helps guide local regulators seeking sources of pollution in their own backyards, he said.

The proposed special order emphasizes efforts to keep 1,4-dioxane from getting into Greensboro’s sewer system in the first place because its chemical structure creates “challenges for its treatment and removal from municipal wastewater.”

“Large-scale treatment technologies for the removal of 1,4-dioxane at municipal WWTPs do not currently exist,” the proposed accord acknowledges, using the acronym for “wastewater treatment plants.”

The proposed settlement doesn’t get a passing grade from everybody. Environmentalists think city government should move more quickly to get 1,4-dioxane under tighter control.

But city officials have known about this problem for several years and already have studied it to a point where more immediate action should be required, Sutton said.

“This is giving them two years to even get to 35 (ppb),” Sutton said, adding that many scientific researchers believe that level still poses an unacceptable threat to human health. “That’s too long.”

The Southern Environmental Law Center in Chapel Hill also finds fault with the proposed consent order, believing the agreement is not ambitious enough and leaves downstream supplies of drinking water at continued risk.

“This is not a one-time thing,” said senior SELC attorney Geoff Gisler. “It has been an ongoing, continuous problem that Greensboro really has not taken care of.”

Instead of aiming for 35 ppb, Gisler said the city and DEQ should be striving to completely eliminate the contaminant from the waste stream.

Gisler added that environmentalists believe 1,4-dioxane really should be capped no higher than 0.35 ppb, 100 times less than the proposed consent order’s goal. EPA estimates the lower level would decrease the lifetime cancer risk for someone regularly consuming that water to 1 in a million, he said.

The proposed order is another step in continuing efforts by DEQ’s division of water resources to rein in 1,4-dioxane levels at the Osborne plant, the state agency said.

“DWR has been working on reduction strategies with the city of Greensboro since 2017,” DEQ spokeswoman Anna Gurney said of the water resources division.

She said the proposed settlement includes a requirement for the city to continue weekly testing of effluent from the Osborne plant to keep a close watch on 1,4-dioxane levels.

Williams of Greensboro’s water department said the agreement would not require the city to add any equipment or personnel at the treatment plant. But it does mandate more testing that should help locate enough additional sources of 1,4-dioxane to bring about the 42% reduction required during the settlement’s second year.

He said the Osborne plant has not had any other major glitches with 1,4-dioxane. Ongoing tests have produced consistent results below 60 ppb, Williams said.

Under terms of the proposed special order, the city would pay DEQ an additional fine of $1,000 per incident for the first five times it misses that target during year one, a rate that would rise to $2,000 after that and to $3,000 if it happens more than 10 times.

The same financial penalties would apply to the 35 ppb target during the second year.

City water officials have been working on their 1,4-dioxane problem as best they could since 2015, actually beginning the process on a voluntary basis when the compound first came to light as a persistent problem in the Cape Fear region.

State environmental officials unveiled the proposed special order for public comment June 22 and plan to put it in final form to take effect this fall.

In its formal announcement last month, DEQ said it would hold a public hearing before taking final action if those who commented expressed a significant interest in having one.

Sutton of Haw River Assembly said she believes the matter is so important to downstream residents in the Cape Fear system that a hearing is needed so all viewpoints can be aired.

DEQ officials spoke at a meeting Wednesday arranged by the Guilford County legislative delegation to share information about Greensboro's recent citation from the agency for releasing 1,4-dioxane at a concentration many times above permissible levels.

The release of industrial chemical 1,4-dioxane occurred in early August.