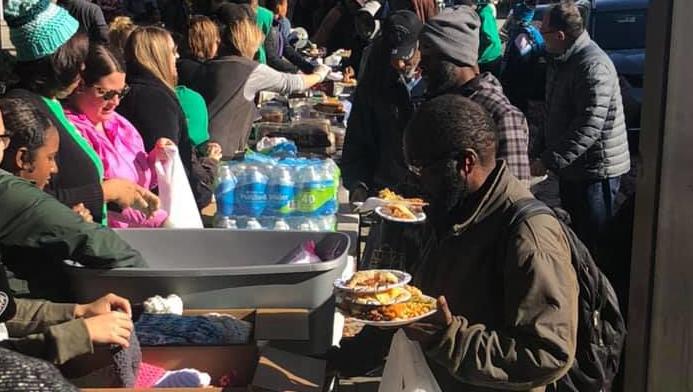 The Green Team Helping Hand prepared an early Thanksgiving dinner for the homeless in downtown Greensboro on Sunday, Nov. 24. 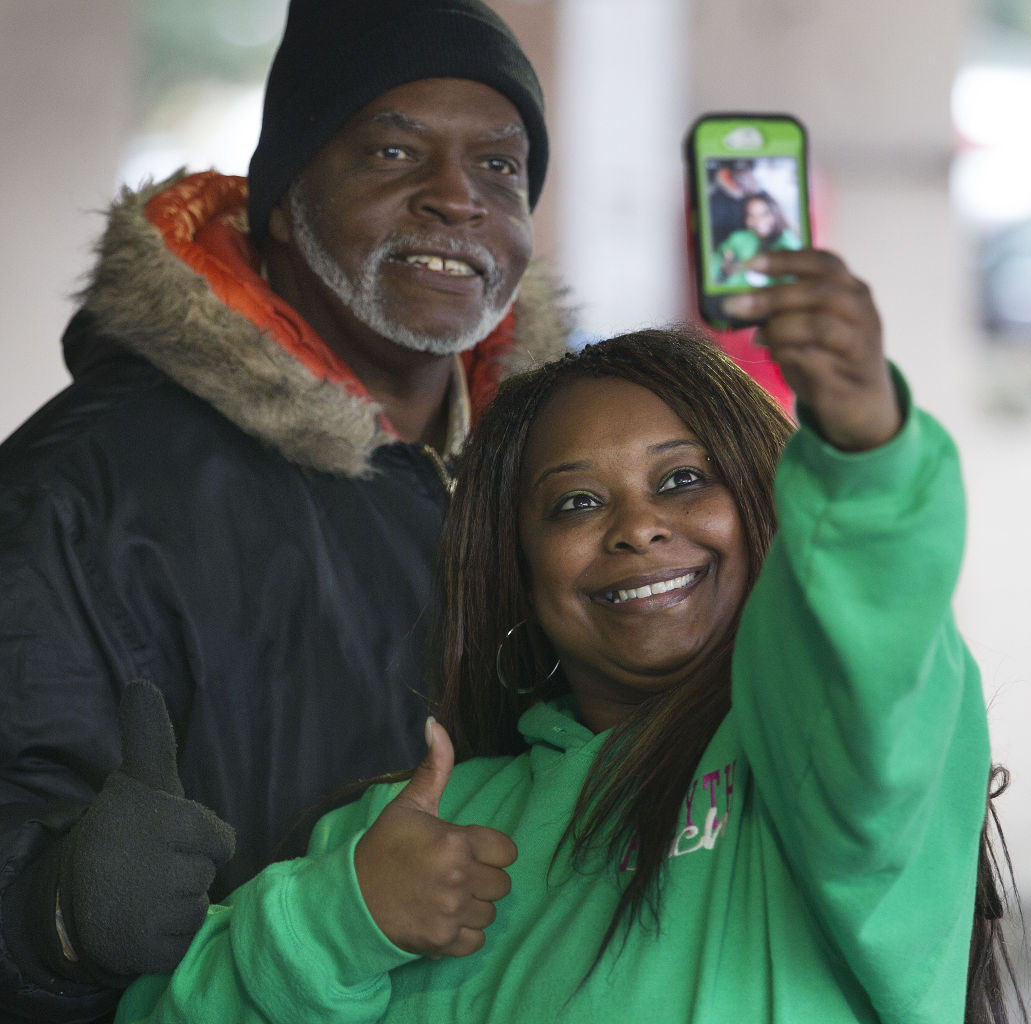 Ashley Benton of the nonprofit Green Team Helping Hands takes a selfie with Dallas Coppadge while serving meals to the homeless and hungry in downtown Greensboro. 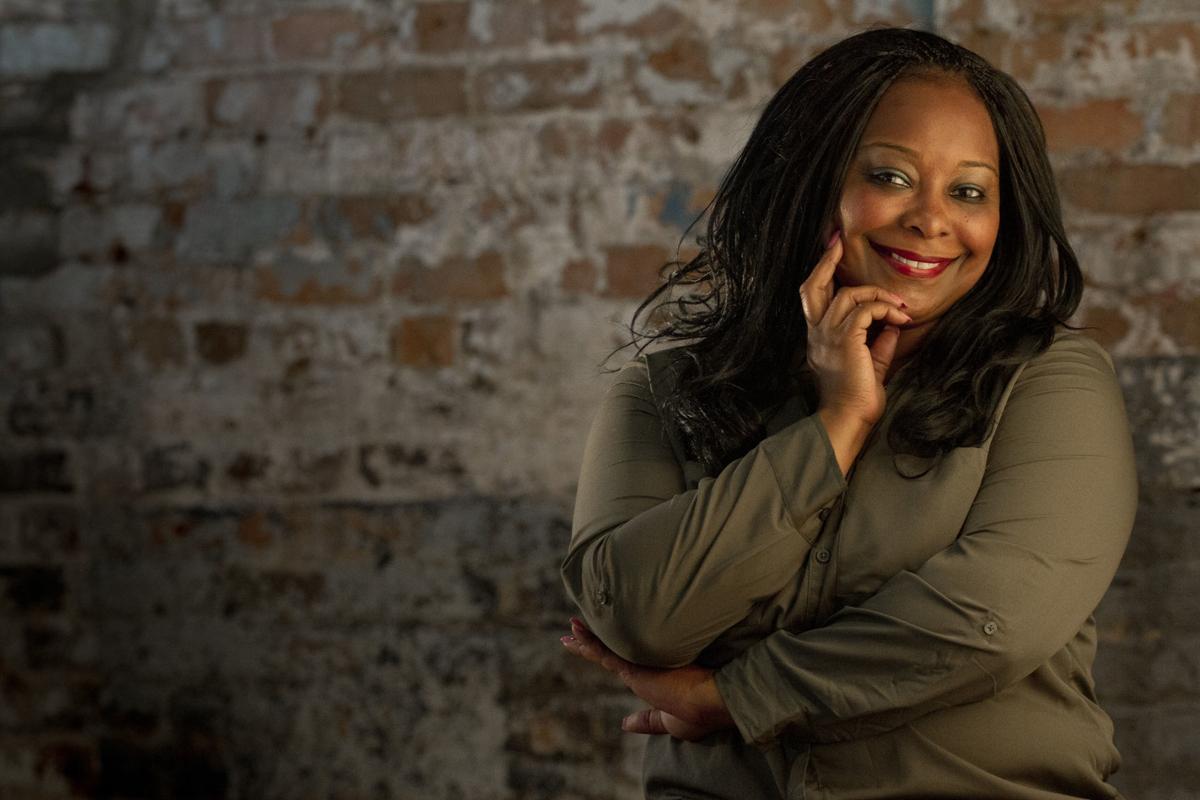 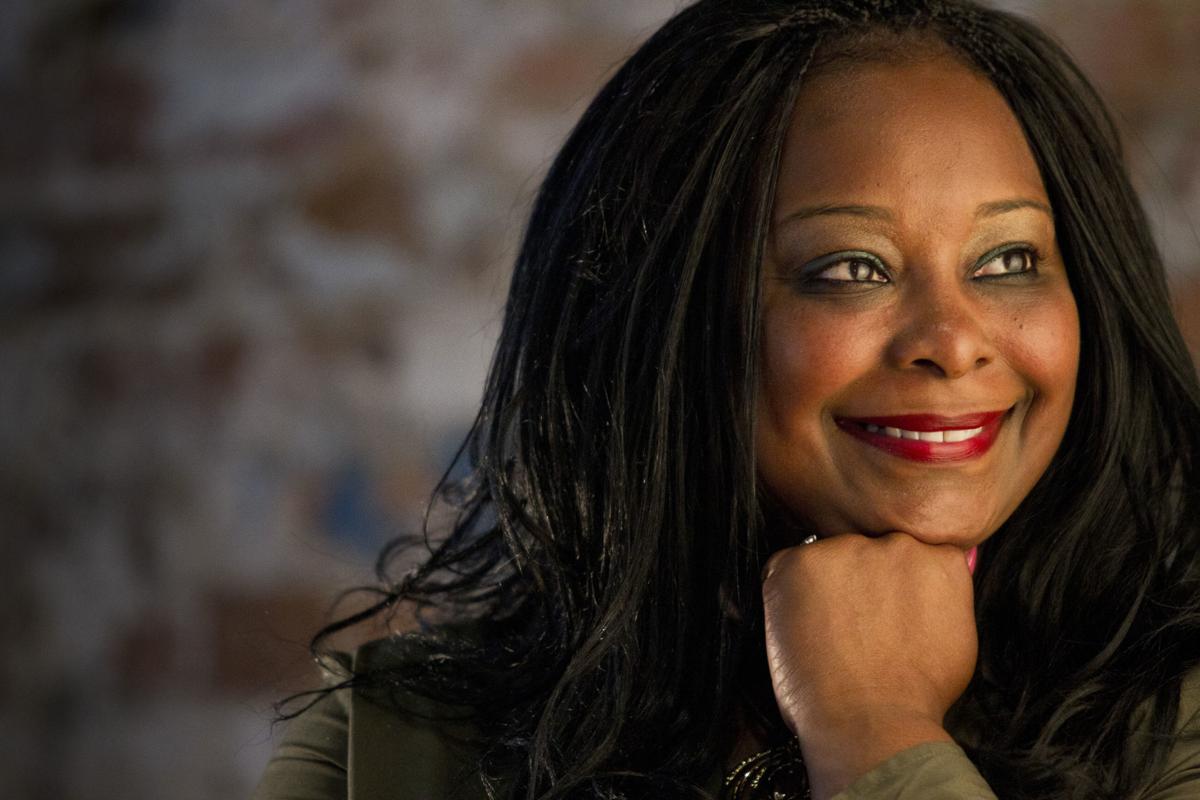 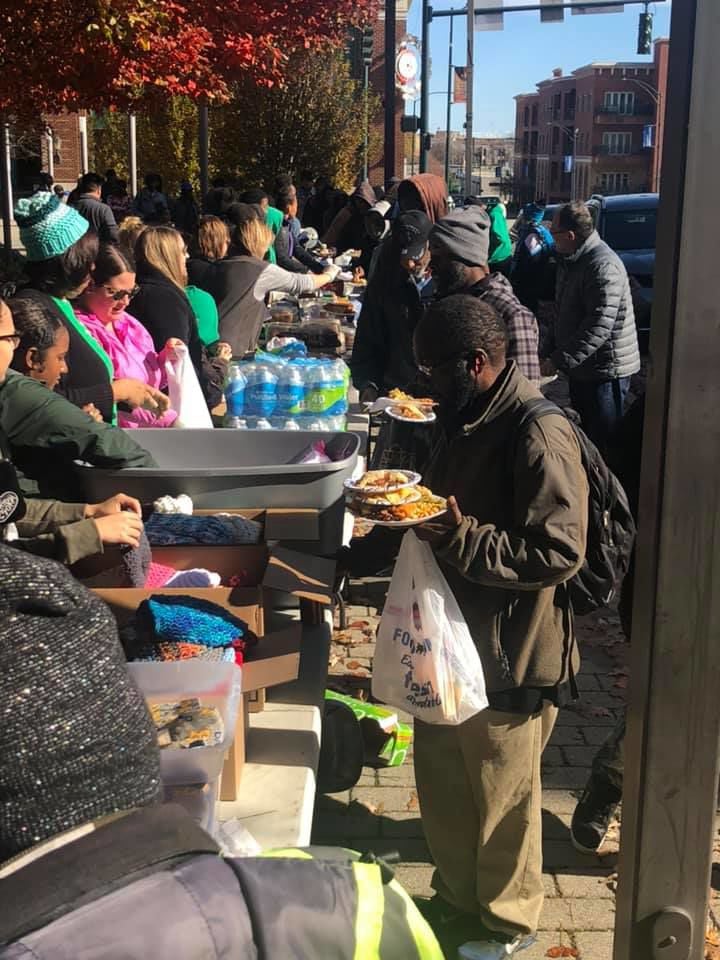 The Green Team Helping Hand prepared an early Thanksgiving dinner for the homeless in downtown Greensboro on Nov. 24.

The Green Team Helping Hand prepared an early Thanksgiving dinner for the homeless in downtown Greensboro on Sunday, Nov. 24.

Ashley Benton of the nonprofit Green Team Helping Hands takes a selfie with Dallas Coppadge while serving meals to the homeless and hungry in downtown Greensboro.

The Green Team Helping Hand prepared an early Thanksgiving dinner for the homeless in downtown Greensboro on Nov. 24.

GREENSBORO — The nonprofit Green Team Helping Hands is at the top of the list in showing love, according to an industry group.

Green Team, which focuses on helping the area’s homeless and hungry, is led by Ashley Benton, a former nominee for Greensboro’s Woman of the Year.

Benton’s group, which operates on a shoestring budget that she raises through individual donations and occasional grants, often provides home-cooked meals on Sundays to hundreds of people who begin forming a line when it’s time for them to show up.

The industry group Great Nonprofits chose the organization as a Top Nonprofit for 2019 based on nominations and the kinds of testimonials people give about their experiences with the group.

Just before Thanksgiving, Benton got a call from “The Steve Harvey Morning Show” radio program and WQMG-FM (97.1) about donating 20 turkeys to the group to pass out to families in one of the public housing communities the group works with in Greensboro.

“I screamed to the top of my lungs,” Benton said of the call.

It’s not about the group receiving another award that thrills her — but the difference it makes with people who are struggling.

Benton started the group in honor of her father, James Benton, who received a transplant organ from Cincinnati Bengals wide receiver Chris Henry after Henry died in a tragic accident in 2009.

Benton said she was so touched by this gift of life for her father that she decided to “pay it forward” after her father’s death two years later.

Before then, she would make plates of leftovers from dinner at her home and hand them out to the homeless. The self-described “Daddy’s Girl” made it official with nonprofit status.

This isn’t the first time the group has gained national attention.

In 2016, the Green Team was named one of 10 groups and companies making the Change AGENTs Pay It Forward list, which each week celebrates efforts undertaken for charitable and humanitarian reasons and in positively changing the way people think.

The Green Team Helping Hands organization was ranked No. 5 by the online group for feeding more than 300 homeless or hungry men, women and children in downtown Greensboro every week with meals ranging from fried chicken dinners to bagged sandwich lunches.

Others making the list: The mass media firm Comcast was No. 1. Its Comcast Cares Day involves 100,000 participants volunteering at more than 900 projects in 22 countries.

The Green Team is known for providing sustenance by way of food and other items, but also encouragement.

The group also gives out bags of toiletries and bus passes when there’s money for them.

Benton is known to take selfies with the downtrodden.

“We don’t mind getting close to them and giving them hugs and listening to their stories,” she said.

She said she believes this is what she was meant to do because of the ways that people come into her life.

Like the family with three children she found living in a car.

“I know the looks of despair,” said Benton, also the wife of a police officer.

She had stopped at a gas station when she spotted the adults.

“I went over to them and they said they had just been put out of their hotel room,” Benton said. “They had been sleeping in the car. The children were in school, and they had a small baby.”

She went to social media, asking her friends on Facebook if they could help. This is how she tackles many of these causes.

Within a few hours she had raised enough money to put them in a room for two weeks.

Benton went back home and prepared a home-cooked meal for them, which she delivered along with a batch of diapers.

From there the family got into a shelter in  and eventually public housing.

Occasionally, the group raises money for pizza dinners (one man on the streets told her recently that he had not eaten pizza in years) and grooming sessions.

Oprah Winfrey tweeted “Ashley ROCK ON!” about an after-Thanksgiving meal in 2014 that Benton was planning at Center City Park.

Benton signed up as an OWN ambassador — people who in their communities are making a difference in the lives of others — and has been featured on the Oprah Winfrey Network website.

“Everyone should treat the public the way that Ashley and her team does,” said Jojo Clemins, the store manager at the Walmart off of East Cone Boulevard.

Clemins used grant money the store received from the Walmart Foundation to help the nonprofit with food to feed the homeless and hungry.

Altar’d State, a young women’s clothing store in Friendly Center, chose the nonprofit as its Mission Mondays recipient through Dec. 17. The store will donate 10% of sales on Mondays to the group’s work.

“We have great partners with such compassion,” Benton said.

But without a steady source of income, the fundraising is ongoing.

There’s no building, no employees, no budget.

“Just putting in the work, and faith,” Benton said.

For her birthday, Benton also hosted a Facebook fundraiser that raised more than $1,000 for tents to help the homeless who cannot stay in a shelter because of legal problems or other issues.

Recently, Benton was certified to handle leftover foods from restaurants and businesses, which she in turns hands out to the hungry.

“This is the only way I know how to pay it back,” Benton said, acknowledging the gift of a transplant given to her father. “We were given the ultimate gift, from one human to the next.”

For the contents of her “blessing” bags, Benton depends on a loosely knit group of family and friends and businesses, who give everything from excess donuts to gloves and hand warmers, purchased by someone who spotted them on sale and who had a few extra dollars.

Benton recently spent $175 of her own money for a Safe Serve certificate for safely storing foods.

She knocks on a lot of doors and does a lot of engaging — after talks over time, Olive Garden has agreed to help provide spaghetti and salad for the group’s Christmas meal downtown.

Much of it emanates from her living room, where supplies are often stacked throughout the week.

She said there is a lot of despair coming through the lines, including families with small children, veterans who have served their country, and gay youth who sometimes confide that they are living on the streets and looking for a meal because families have kicked them out for their sexuality.

“It can be depressing but it also uplifts me because I’m trying to help them,” Benton said.