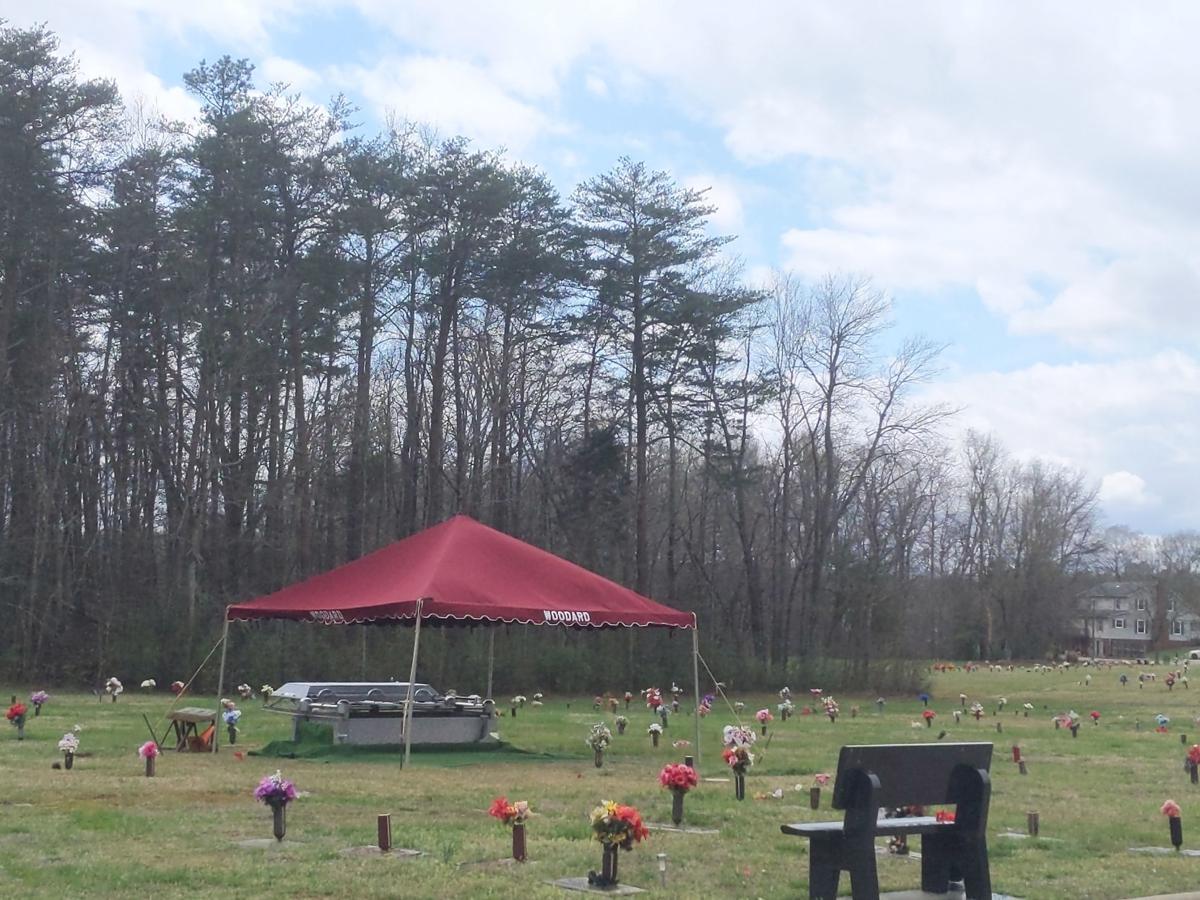 No seats are set up at a newly dug gravesite at Lakeview Cemetery in Greensboro. 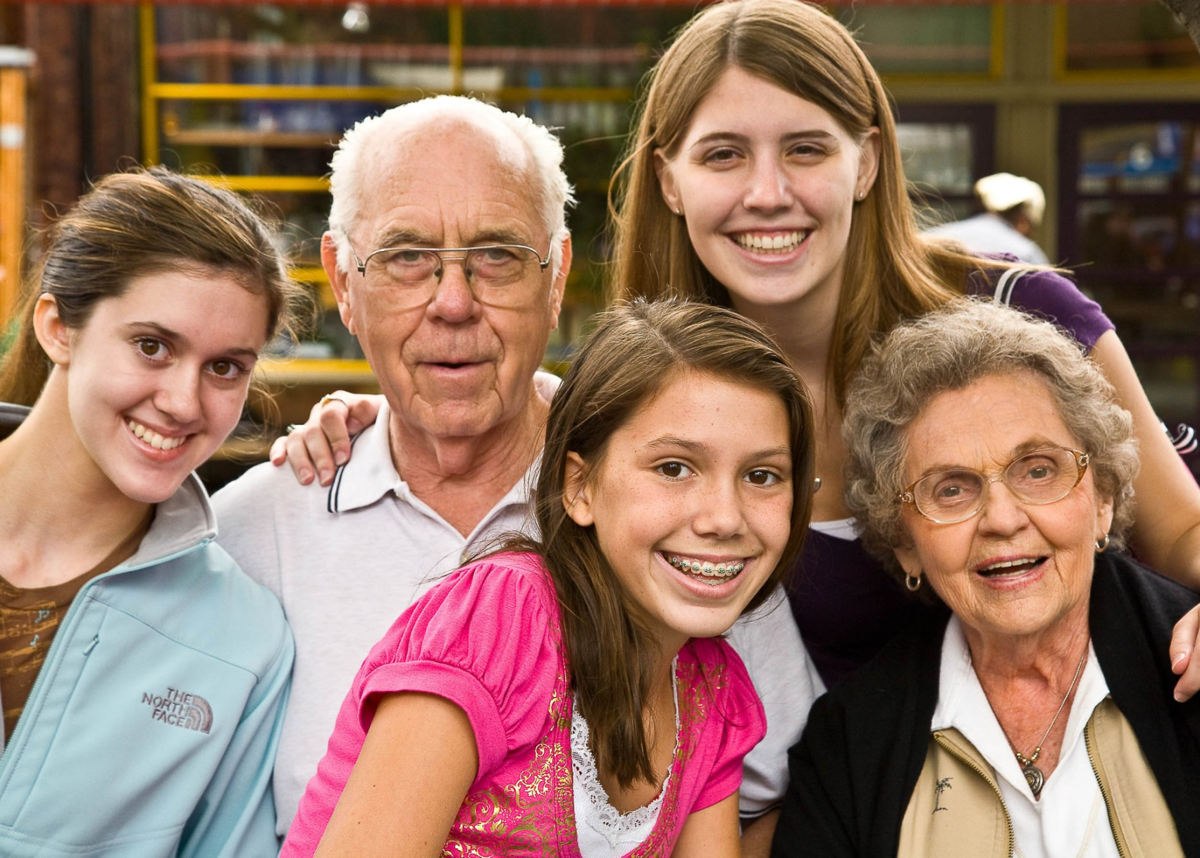 Mattie Lee Burns Miller, 92, died March 16 with her husband, Jack Lawrence Miller, at her side. This is a photo of the two with their grandchildren.

No seats are set up at a newly dug gravesite at Lakeview Cemetery in Greensboro.

Mattie Lee Burns Miller, 92, died March 16 with her husband, Jack Lawrence Miller, at her side. This is a photo of the two with their grandchildren.

GREENSBORO — As the new coronavirus becomes a household word and public gatherings of almost any size are discouraged, those in the funeral industry and grieving families are having to figure out how to honor recently deceased loved ones.

Funerals, a time of comfort to loved ones, are among the last vestiges of tradition in this country. They are so important that families sometimes ask funeral homes to hold a body for weeks so that loved ones can get there. It is a time of tears, tissues and spontaneous life-giving hugs and hand-holding.

And then came the coronavirus, which causes the potentially fatal disease known as COVID-19.

“I never imagined being on the telephone with the CDC talking about this,” said one local funeral director, referring to the national Centers for Disease Control and Prevention.

“I never thought I would be ‘elbow bumping’ with a 90-year-old grandmother,” he said of meeting with one family planning a service.

While the virus spread, obituary pages provide glimpses of lives lost, from the great-great-great grandfather known to family and friends as JC, to the 92-year-old woman and baby of her family who was “beloved and happily spoiled by her siblings” while growing up.

Families, following suggestions from funeral homes, began opting for small intimate gatherings with more public memorials at a future date. This fits the CDC’s suggested guidelines and edicts from the governor.

Families must limit the number of guests to under 50 and are being asked to consider graveside services with just the immediate family— all while keeping 6 feet away from each other.

“There’s so much not even understood about the virus,” said Tiffany Woodard-Brown of Woodard Funeral Home in Greensboro. “There’s so little known where with other diseases we know and we understand the precautions. The only thing we can do is take the precautions we would if it’s another disease that we are educated on.”

“We just have to keep doing what we do, which is serving families,” Woodward-Brown said.

The funeral home recommends bypassing visitations before the funeral, which limits physical contact and the number of people in one space.

Woodard-Brown said that the planning became less hectic as N.C. Gov. Roy Cooper issued specific mandates such as the number of people in one space and social distancing, which all but erases the ability to hug each other for comfort.

“Most families have been understanding because they are concerned about their own health,” Woodward-Brown said.

Woodward-Brown, who says she’s being careful with human contact and building up her immune system by taking vitamins, says it’s harder in her field — where comforting people is a major tenet.

“I try not to touch as much as I normally do and try not to show as much physical conduct,” Woodard-Brown said. “It’s hard, but they have been doing the same thing. They are hoping that when they walk in we wouldn’t do a big hug.”

Actually, they’ve jokingly told her as much.

Woodard-Brown is suggesting that people who plan to visit a grieving family to instead send the family a card, an email or call with their condolences.

For 92-year-old Mattie Lee Burns Miller, the immediate family gathered at her home of the past 55 years with her husband and love of her life, Jack Lawrence Miller, and said their goodbyes. From other states, grandchildren watched via the ZOOM video communication app.

Buck Cochran, a close family friend and ordained minister, gave the eulogy in the living room.

There were 10 people in all. Without the need for “social distancing,” the memorial service for the retired nurse would have been held at her church with family and friends in the pews.

“She would absolutely forbid any sort of public gathering at this time to celebrate her life,” said daughter Alice Blalock of Greensboro. “She wouldn’t have wanted to put anyone at risk.”

Those who didn’t know would have heard how the Chatham County native started pursuing her nursing degree at age 16 at UNCG — too young to start nursing school — before enrolling in the Presbyterian School of Nursing and UNC-Chapel Hill.

Miller and her husband raised a daughter and two sons on a street in Alamance County with about 15 houses.

She returned to school in her 50s for an advanced degree from UNCG and taught nursing at Alamance Community College until her retirement.

“She was a strong woman, an independent woman and a great mother,” Blalock said.

With her own grandchildren, she often had contests to see who could get their hands the cleanest before meals.

A liver transplant recipient in her 60s, she later lost her vision to shingles and was left partially paralyzed after a stroke.

In recent years, an in-home aide in the mornings helped her shower and put on her makeup.

“My mother wasn’t a fancy person but she wanted to present herself well,” Blalock said.

Blalock’s dad placed a recliner on the back porch.

“Even on some of her worst days she would not stay in bed,” Blalock said.

Mattie Lee Burns Miller also found a sense of purpose in every day.

She had lived with an autoimmune disease and wondered if it was genetic.

“She had us researching our family tree,” Blalock said. “She wanted to gather this information, send it to the National Institutes of Health and let them have this information so it might help somebody else.”

Of the 37 people they found over five generations, 11 had an autoimmune disease. They documented their circumstance and stories.

Blalock’s mom passed on her findings to the NIH and a national research organization for people with autoimmune diseases.

She got letters from both organizations thanking her for the research and saying it was helpful.

“It was something that gave her great pleasure — to still do something and contribute,” Blalock said.

Miller was passionate about health issues, science and the news.

“She would have kept us up to date on this crisis, making sure we are all using best practices for social distancing and personal hygiene,” Blalock said.

Much of this, people will hear at a celebration of her life, in perhaps weeks or months to come.

But on Friday, 10 of them gathered with Cochran to share memories and music, with Blalock’s husband singing and playing the guitar and Cochran playing “Danny Boy” on the cello.

They would later share lunch together and enjoy Mattle Lee Burns Miller chocolate chess pie for dessert. Blalock's daughter made the pie – Miller taught all of her granddaughters how to make the pies.

“We cried, we laughed, we remembered, and we were thankful,” Blalock said. “My cousin ended this time with a prayer, followed by my husband singing ‘Amazing Grace.’ It was certainly a sacred time.”

“We are in a new normal,” said Ted Hopkins of Wilkerson Funeral Home in Reidsville, who has been in the industry 30 years.

Wilkerson’s staff had just finished live streaming a funeral on Monday for a man who according to his obituary was an avid Carolina Panthers fan who “possessed the most loving kind spirit, always helping others.”

Last week, it was a beloved emergency services worker, whose funeral would have drawn a massive audience. The first-responder community was able to place big screen TVs in fire houses so that they could all watch from different locations, Hopkins said of investing in the livestreaming technology about five years ago.

Now friends and family can watch live from anywhere with a computer or watch it up to 90 days later using a link on the company’s website.

“For about a year we just couldn’t get the technology right and we weren’t willing to offer it until it we had clean audio and visuals,” said Hopkins, the business manager at the funeral home. “We are so pleased we did the work before we had to use it.”

Other changes happened more recently. Hopkins said it felt unusual not to be working with large crowds at either funeral, but he knows that following the recommendations are important right down to removing chairs from graveside service — although they will have a few chairs in a van for people unable to stand for the service.

The staff no longer sets up for home visits. That included setting up extra chairs and a sign-in book for visitors.

They are still putting out the road signs asking people to slow down in the area because of a death in the family.

“That’s with no contact to the family,” Hopkins said.