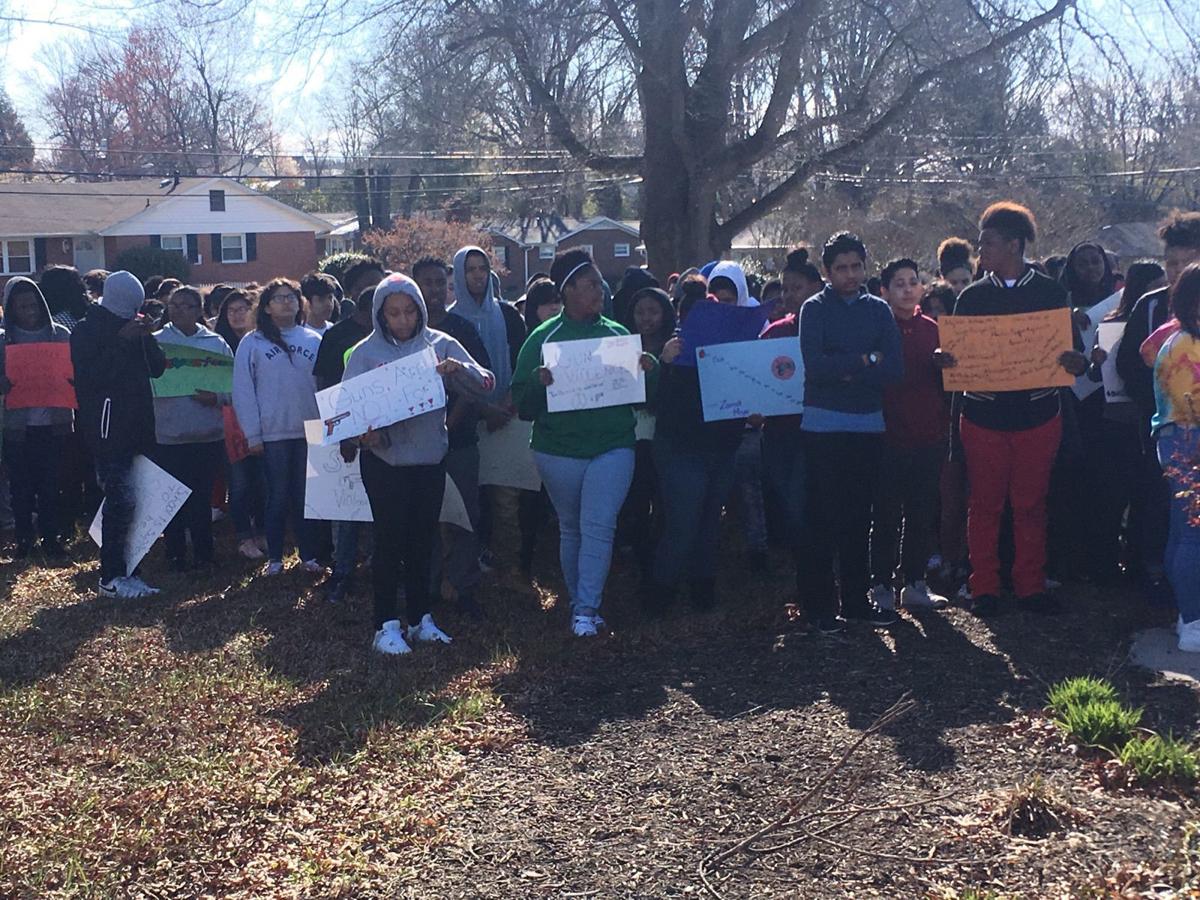 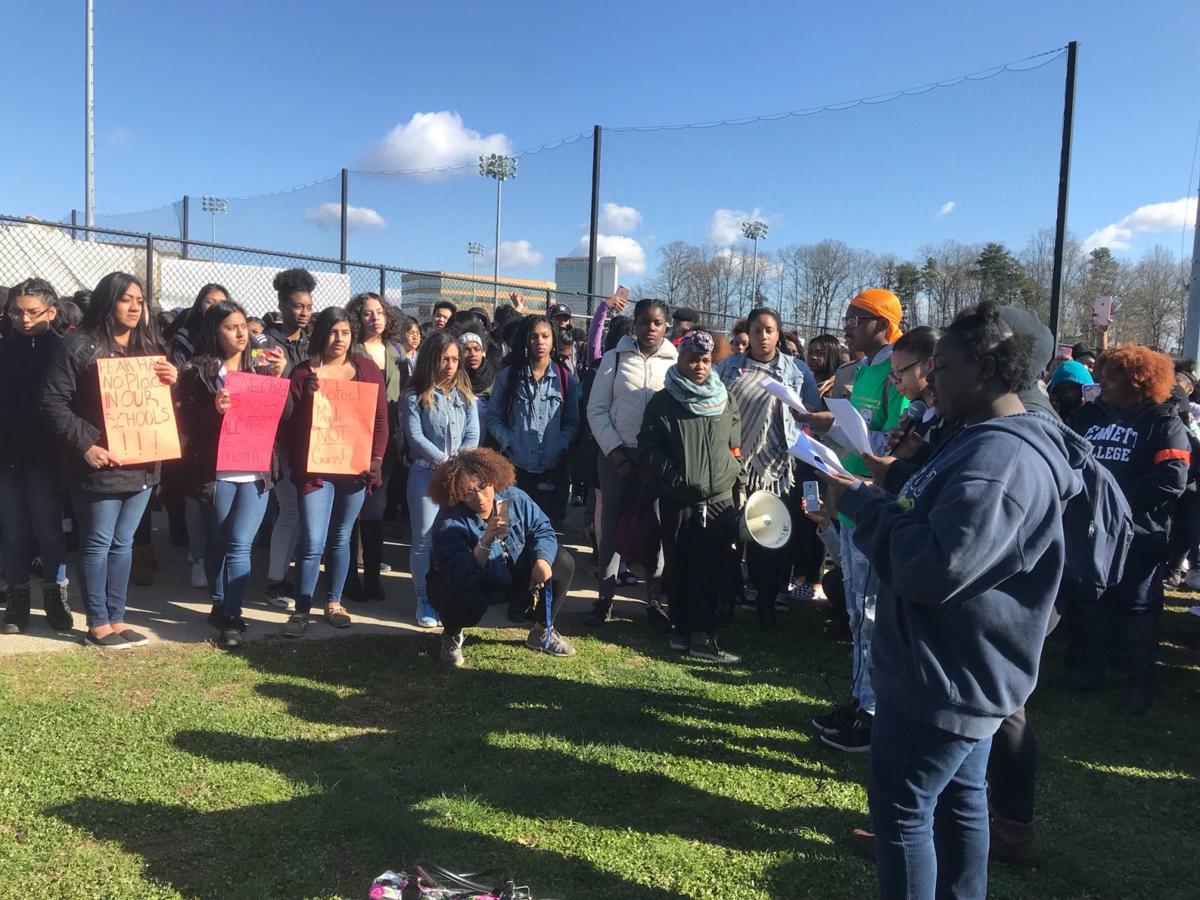 Students walked out of classes at Smith High School on March 14, 2018, to protest gun violence. 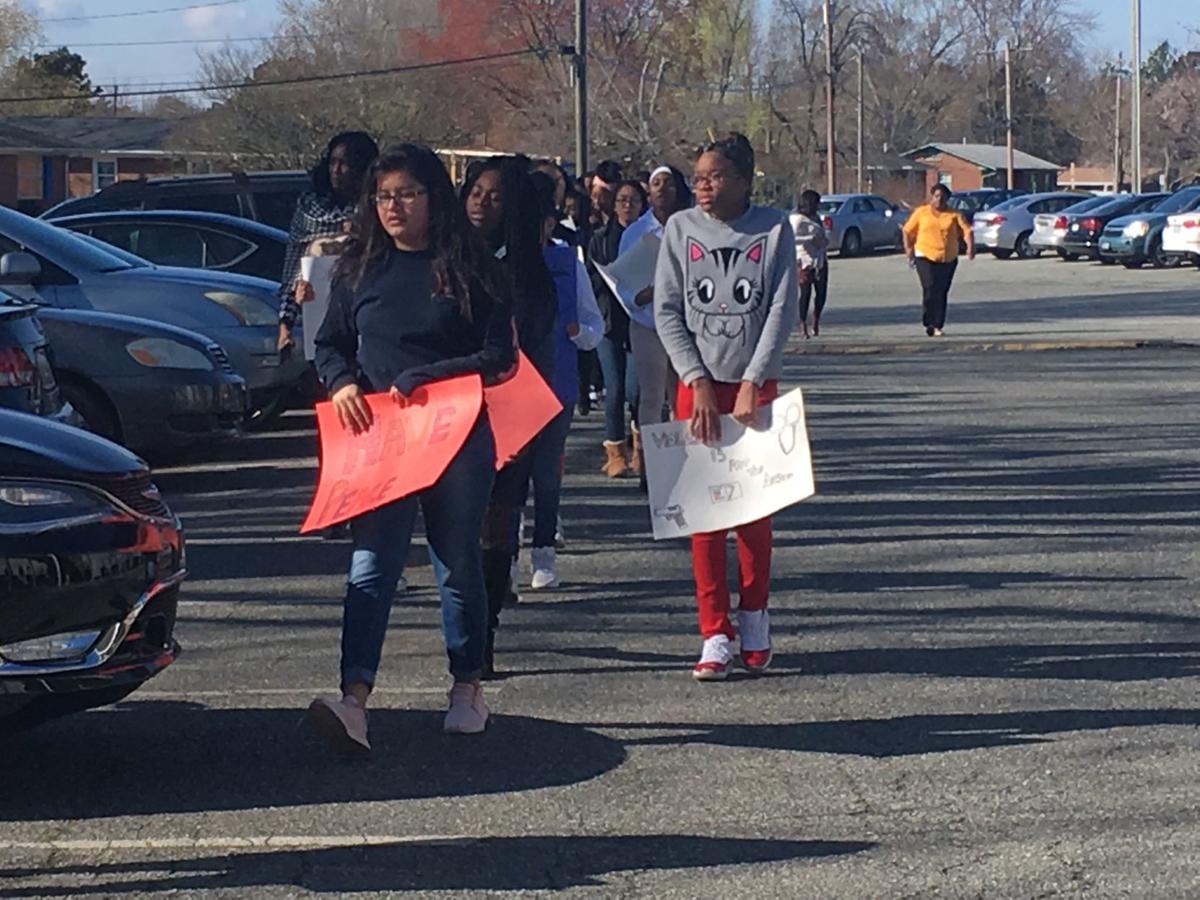 GREENSBORO — Jackson Middle School students walked out of class in silent protest against gun violence Wednesday and in solidarity with survivors of the Marjory Stoneman Douglas High School shooting exactly one month ago.

The middle school in Greensboro joined other Guilford County schools in the protest. Smith and Page high schools, Weaver Academy and Penn-Griffin School for the Arts also were planning walkouts.

At Jackson, some middle schoolers walked in the late-winter cold with signs than read "Guns don't solve problems," "The violence must stop," and notably “Rest in Power” with the names of the students who died in the Valentine’s Day attack.

Workers left the cafeteria and the library to see them off. People passing by in cars slowed to watch.

"We wanted to do this in a way that said we supported them," Principal Katrinka Brown said.

When it was over, students said they simply wanted to be heard.

"We should feel safe at school," said Yahir Santos, one of the students who led the event.

Some were moved by how similar their days likely were to the students who died in Florida: They had come in that morning, probably saw their friends in the hallway on the way to class, checked their lockers and moved on to class.

"Just like us," said Nyasia Monk, another Jackson student leader.

When she and other classmates looked around, said Jocelin Palacios, another Jackson student organizer, they felt they had to speak up.

Although the demonstration was planned by the eighth graders, a few seventh and sixth grade classes asked to join in, with about 200 students circling part of the campus for the 17-minute demonstration.

"We realized it could have happened anywhere," Palacios said.

"This gives us the confidence and strength to be able to do it again, if we have to," Santos said.

At Smith High, hundreds of students walked out. Students chanted “This is what democracy looks like.”

UNCG students and faculty took part in a 17-minute ceremony that featured a reading of the names of the 17 victims, speeches against guns in A…

'Every one of these individuals could have died that day': Students across US say 'enough' to gun violence

The protests have drawn mixed reactions from school administrators. While some applaud students for taking a stand, others threatened discipline.

Students hoisted "Stand United" signs. They chanted "''Hey, hey, ho, ho - the NRA has got to go" outside the White House. Others read the name…

Students in at least 24 schools in Guilford County joined tens of thousands of students nationwide in school walkouts or related events Wednesday.

Students walked out of classes at Smith High School on March 14, 2018, to protest gun violence.