High Point's Woolworth sit-in was lesser known, but helped move a country, too
0 comments
Share this
{{featured_button_text}}
1 of 2

Unidentified students from William Penn High School take part in a sit-in at F.W. Woolworth in High Point on Feb. 11, 1960. 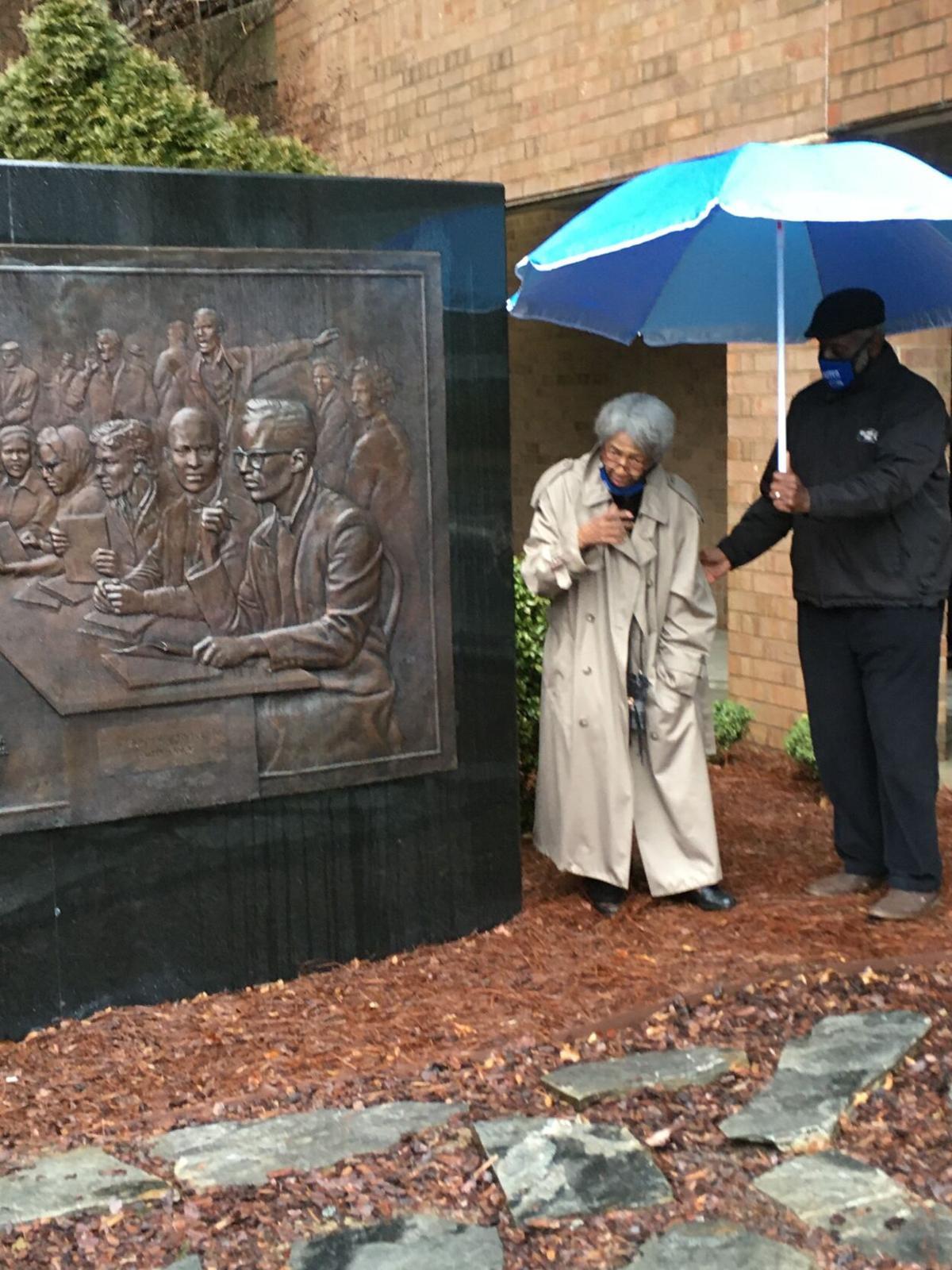 Mary Lou Blakeney is one of the participants in the historic February civil rights Woolworth Sit-In by high school students in High Point on Feb. 11, 1960.

HIGH POINT — As word spread about the sit-ins at the F.W. Woolworth lunch counter in Greensboro 61 years ago, four teenagers began organizing their own sit-in — believed to be the first in the nation by high school students.

One of them, Mary Lou Blakeney, stood underneath an umbrella in a cold rain Thursday before a metallic artist's rendering  of that lesser-known protest.

As in Greensboro, Black people could shop at the Woolworth's store in High Point but could not eat at the segregated lunch counter.

At some point, a reporter 61 years ago pointed out that they were the first high school students organizing and leading a lunch counter protest.

"We didn't think about that," said the retired nurse, as she stood on Wrenn Street, at the back of where Woolworth’s once stood. "All we knew was that we were close to people doing the same thing.

"We wanted to right wrongs."

The four N.C. A&T freshman who kicked off the Feb. 1, 1960 sit-ins in Greensboro started a movement that spread and put pressure on cities across the South.

"Our history is not complete without us telling this story," said Blakeney, who years later would serve on the High Point City Council.

Blakeney's voice was strong and her words detailed as she recalled the event six decades ago.

On Feb. 11, 1960 — also a Thursday — the 26 students took seats at the counter of the former F.W. Woolworth store facing South Main Street.

The lunch counter was immediately closed for the day, and in the coming days, the students also staged sit-ins at the Paramount Theater, other stores and several churches.

The four high school organizers, ages 14 to 16, had been following what was taking place in Greensboro.

Everyone was talking about it.

In preparation for their demonstration, they sought advice from the Rev. B. Elton Cox, a Freedom Fighter who marched with Martin Luther King Jr., and Miriam Fountain, a retired teacher and the mother of two of the students. He was initially reluctant because of their ages.

But the students wouldn't be dissuaded, promising him that the demonstrations would be nonviolent.

With the demonstration looming, a large group of students met and were quizzed, challenged and weeded out, according to Blakeney. The number dwindled to 26.

On Feb. 11, they left school — 24 students from William Penn High and the Fountain sisters from High Point Central — and headed to Woolworth's.

It was about 4 p.m. and snow from a recent storm was still piled on the sides of streets.

Parents knew what they were planning and gave their blessing despite the reality that if their employers found out they might be fired.

"I don't know one that dissuaded us," Blakeney recalled.

First, the students stopped at the Fourth Street YMCA/YWCA for prayer.

Once they got to the store, students began milling about as if they were shopping.

When they got the signal from Cox, who touched his hat, they began slipping into empty seats at the counter. Students took over other seats once customers left.

A waitress told them they wouldn't be served.

Blakeney said the manager approached. When they wouldn't budge, the police were called.

The students began to do their homework, but by then a crowd had gathered, including a group of men who pulled up in a truck.

Blakeney described the turning mood as "ugly," with some in the crowd attempting to strike and kick the students. She remembers racial slurs hurled their way as police looked on.

Blakeney, who admits to having a temper, says she was resolute that day.

"I was not going to do anything that was going to jeopardize anything we had planned," Blakeney said. "We were deeply committed."

The students stayed in their seats, even as they grew fearful.

The lights were turned out and an announcement was made that the store had closed.

Blakeney said they sang "We Shall Overcome” and walked out with their heads high and filled with a sense of accomplishment — and fear. They were followed down Washington Street and pelted with snowballs.

When they returned the next day, the lunch counter was roped off.

So they stood behind it and sang.

And they returned the next day. And the next.

Blakeney says there's still work to be done in this country, 61 years later.

"We have a ways to go," she said as others shook their heads. "We must continue the fight."

US and Japanese astronauts begin spacewalk

US and Japanese astronauts begin spacewalk

Guilford County Black history, from A to Z

A few of the seminal moments and notable people who helped weave the area’s social fabric.

A closer look at some of the people with Guilford County ties who left their mark on history.

Bold and brazen, breaking barriers was Elreta Alexander's bread and butter. So was the law.

The story of how this preacher's daughter from Greensboro would become the first Black woman to practice law in North Carolina is one everyone should know. But they don't. A new book aims to change that.

Unidentified students from William Penn High School take part in a sit-in at F.W. Woolworth in High Point on Feb. 11, 1960.

Mary Lou Blakeney is one of the participants in the historic February civil rights Woolworth Sit-In by high school students in High Point on Feb. 11, 1960.