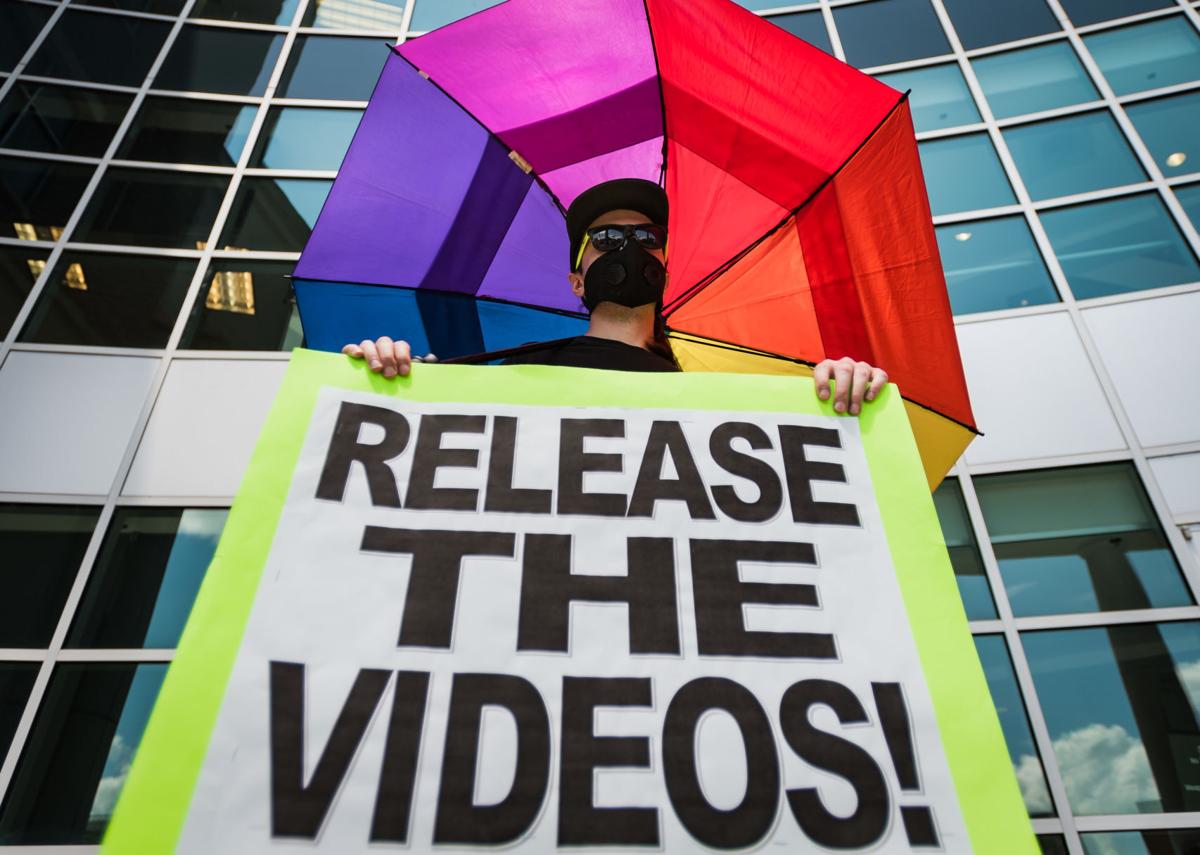 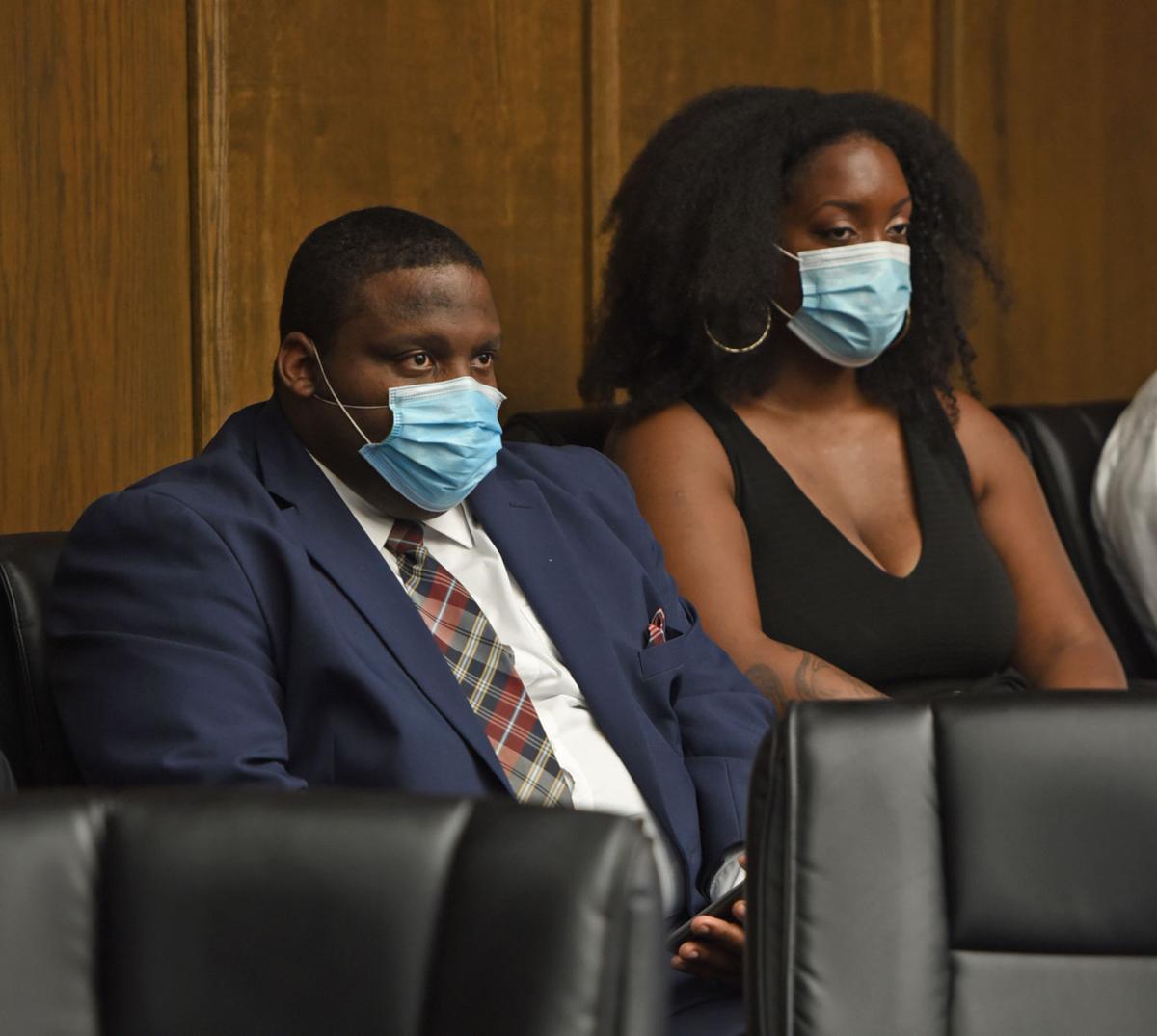 Sean Neville and Brienne Thornton, relatives of John Neville, listened July 8 as Forsyth County Sheriff Bobby Kimbrough spoke at a news conference, where Forsyth County District Attorney Jim O’Neill announced that criminal charges had been filed against five detention officers and one nurse in the December 2019 death of Neville, an inmate at the Forsyth County jail when an incident led to his being taken to a hospital where he later died.

Family members of John Elliott Neville said Tuesday that they support the public release of video taken inside Forsyth County jail that can shed light on circumstances surrounding Neville's death in December 2019. The family was previously opposed to releasing the body camera videos and other footage.

"After considerable deliberation, discussion and much prayer, the Neville family has decided that it is time for the public to see the video depicting the last moments of their father's life," the family's statement reads. "While they initially hoped to keep the matter private, it is clear that will never be possible."

The family said in the statement that they appreciate all the agencies that were willing to honor their wishes.

A coalition of news organizations, including the Winston-Salem Journal, the Greensboro News & Record, The News & Observer of Raleigh and the New York Times, have petitioned the courts to release the video. A hearing will be held on the matter at 11 a.m. today in Forsyth Superior Court.

"The family members have not made this decision in a vacuum," the statement said. "They are aware that what happened to their father has happened to countless other sons, brothers, uncles, cousins, fathers, and grandfathers. While by law they do not have any standing to support or oppose the decision that will be made on Wednesday, July 29, 2020, they feel it is necessary for all of the stakeholders, protesters, and the community at large to know that they will not stand in the way of full transparency."

John Neville, 56, of Greensboro died on Dec. 4, 2019, at Wake Forest Baptist Medical Center, three days after he was placed in the custody of the Forsyth County jail. The Forsyth County Sheriff's Office did not notify the public for seven months about Neville's death and provided only limited information about the death on June 26, after questions from the Winston-Salem Journal. Sheriff Bobby Kimbrough Jr. said part of the reason he kept quiet about the death was because the attorneys for Neville's family asked him to do so.

Neville died from a brain injury caused when his heart stopped beating. He asphyxiated while being restrained in the hog-tie position at the jail, according to his autopsy report.

He had suffered a seizure while asleep and fallen from a top bunk bed to the concrete floor. Disoriented, he struggled with detention officers, who placed him in handcuffs and ankle restraints and moved him to another cell. Eventually, he was placed in what is known as a hog-tie position — his arms handcuffed behind his back and his legs folded up toward his buttocks.

During that time, he told detention officers at least 10 times that he could not breathe. At least twice, the response from detention officers was, "Come on buddy, if you can talk, you can breathe," according to three independent sources familiar with the investigation.

Neville's death has sparked weeks of daily protests in Winston-Salem. The Triad Abolition Project and the Unity Coalition have staged all-day events at Bailey Park, demanding answers from Kimbrough and Forsyth County District Attorney Jim O'Neill and accusing them of covering up Neville's death. They have not asked for the videos to be released.

Black Lives Matter Winston-Salem has demanded release of the videos.

More than 50 people have been arrested and charged with impeding traffic in connection with the protests.

The petition from the news organizations seeks the public release of footage that captured John Neville's arrest on Dec. 1 by Kernersville police, who took him into custody on charges of assaulting a female in Guilford County. It also seeks video footage that shows what happened to Neville while he was in custody, including any restraint or force used.

"There are video recordings from various angles, with audio, that capture the activities and movements of the charged defendants, and their subsequent conduct, in response to Mr. Neville's initial medical crisis," according to a motion to continue filed by Forsyth County District Attorney Jim O'Neill.

On Monday, Kris Neville and Brienne Thornton, two of John Neville's three children, spent time at Bailey Park and told the organizers that they appreciated the support and advocacy for their father. Kris Neville said in an Instagram video that it took him a long time to process his father's death and called what happened to him unfair and inhumane.

Photos: Occupy the Block in Winston-Salem

Protesters demand answers in the death of John Neville.

Photos: Second day of Occupy the Block in Winston-Salem