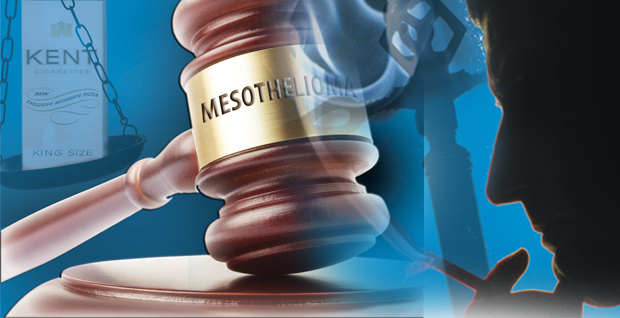 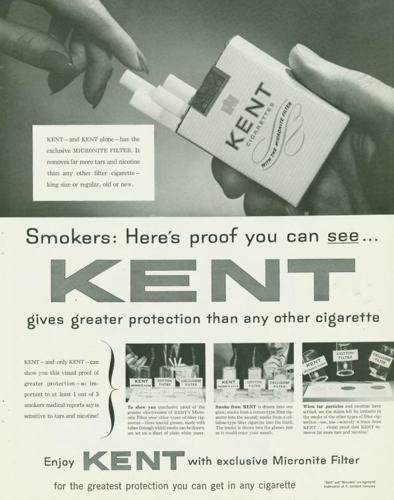 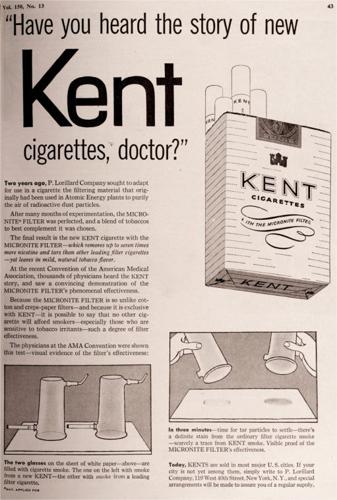 Kent was Lorillard’s answer to the health scare of the early ’50s, when links between smoking and cancer first drew attention. 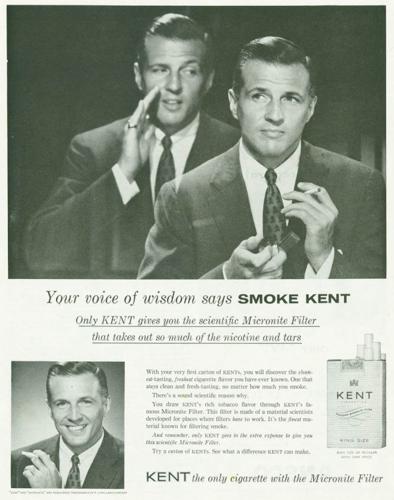 A 1950s Kent ad touts the cigarette’s Micronite filter, which contained a deadly form of asbestos linked to mesothelioma.

By Myron Levin Special to the News & Record

The company said in its high-profile introduction of the cigarettes that the filters would offer “the greatest health protection in cigarette history.”

But the patented “Micronite” filter contained a particularly deadly form of asbestos.

Smokers puffed their way through 13 billion Kents from March 1952 until May 1956, when Lorillard changed the filter design.

Sixty years later, the legal fallout continues — including in September when a Florida jury awarded record damages of more than $3.5 million.

Lorillard and Hollingsworth & Vose, the company that supplied the asbestos filter material, face numerous lawsuits by victims of mesothelioma, an extremely rare and deadly asbestos-related cancer that typically shows up decades after initial exposure.

Plaintiffs have included factory workers who produced the cigarettes and former smokers who say they inhaled microscopic asbestos fibers through the filters.

In a statement to the News & Record, Lorillard says its use of asbestos in cigarette filters was brief and it didn’t realize the health risks at the time.

“Original Kent cigarettes included asbestos as an element of the filter material for only four years in the 1950s,” wrote Ronald Milstein, Lorillard’s executive vice president and general counsel.

“At that time, asbestos was used in a wide range of consumer products, and it was not until years after Lorillard stopped using asbestos in the Kent filter that asbestos-containing products were linked with disease.”

Lorillard financial filings with the Securities and Exchange Commission show the company settled roughly 90 cases in a recent two-year period, and that roughly 60 more cases are pending.

Unofficial counts show the number since the 1980s could be in the hundreds.

There has been a burst of new cases in the last few years, according to SEC filings.

Although potential plaintiffs are now in their 70s and 80s, growing awareness of the asbestos episode could be the cause.

These days, a mesothelioma patient is almost certain to be asked by his doctor or lawyer: Did you happen to smoke Kents in the 1950s?

Lorillard is the third-leading U.S. cigarette-maker, with a nearly 15 percent market share and net sales in 2012 of more than $6.6 billion.

Kent was Lorillard’s response to the health scare of the early 1950s, when the link between smoking and lung cancer began drawing wide attention.

Lorillard touted the superiority of its filter — a blend of cotton, acetate, crepe paper and crocidolite asbestos.

At the time, the risk of deadly lung disease to heavily exposed asbestos miners and plant workers was already well-documented.

But asbestos also was known to be an effective filter material, dense enough to stop particles and gases.

Lorillard had learned of the use of crocidolite asbestos in gas masks made for the Army Chemical Corps.

In contracting with Hollingsworth & Vose to supply the material, Lorillard agreed to be held solely responsible for any “harmful effects’’ of the cigarette filters.

It backed the launch with a big advertising campaign.

The filter material was produced at Hollingsworth & Vose plants in West Groton and Rochdale, Mass., and shipped to Lorillard cigarette plants in Louisville, Ky., and Jersey City, N.J.

For Hollingsworth & Vose workers, the results were catastrophic.

The plant was a “dust-creating monster,” said Dr. James A. Talcott, an oncologist who co-wrote a study of Hollingsworth & Vose filter workers.

Published in the New England Journal of Medicine in 1989, it tracked the health status of 33 former employees of the West Groton plant.

By then, 28 had died. Of the five surviving workers, four were suffering from asbestos diseases.

Dozens of Lorillard plant workers also died of mesothelioma. An exhibit in a court case in Louisville listed 34 victims by initials only, under the heading “Lorillard Workers With Mesothelioma At Louisville And Jersey City Plants.”

How much asbestos Kent smokers inhaled has been a more contentious and ambiguous subject. Internal company documents produced in lawsuits highlight Lorillard’s deep anxieties that Kent smokers were breathing asbestos.

For example, an April 1954 letter from Lorillard research director Harris B. Parmele to company President W.J. Halley said that researchers had found “traces of mineral fiber” in the smoke.

“We are embarked upon a program of attempting to work out a method for the elimination of the presence of such fibers in the smoke,” the letter said.

And two months later the president of Hollingsworth & Vose, A.K. Nicholson, wrote in a memo: “It is Lorillard’s belief that asbestos must be eliminated from the Kent cigarette as soon as possible because of a whispering campaign started by their competitors of the harmful effects of asbestos.”

Even so, Lorillard continued using asbestos in the filters for the next 16 months and continued to sell existing stocks of Kents for several more months.

Lorillard fiercely defends the filter cases that go to trial.

“They litigate hard,” said Timothy F. Pearce, a lawyer with the Levin Simes firm in San Francisco who successfully tried a filter case in 2011.

“It’s no small undertaking to be in a trial with them,” Pearce said. “They had, like, 13 lawyers” working on the case.

Lorillard and Hollingsworth & Vose have won 17 of 23 trials of filter cases.

A key contention of the companies is that little or no asbestos leaked from Kent filters, so plaintiffs contracted mesothelioma in some other way.

Despite the nervous tone of internal letters and memos, they say that tests of Kent smoke in the early ’50s never found more than three fibers per cigarette.

Plaintiffs have found this hard to challenge, since Lorillard didn’t preserve most of the original test reports.

The companies’ first line of defense has been to convince juries that plaintiffs didn’t smoke Kents in the first place — and only say they did because they have a bad memory or are shading the truth.

In an effort to undermine the companies’ credibility, defense lawyers and investigators fan out around the country to track down and interview family members, school chums, Army buddies — anyone who might have known the plaintiff in the 1950s.

It’s hard to establish the brand of cigarette a person smoked decades ago, and the strategy has often proved successful.

It failed in the case of Don Lenney, who not only won in court but is still alive nearly four years after receiving a diagnosis of mesothelioma. (Many mesothelioma victims die within a year.)

Lenney, 76, a former insurance agent in California, said he started smoking in high school, and soon switched from unfiltered brands to Kent.

“The Kent Micronite filter was supposed to be the healthy alternative,” he said, “so I started smoking Kents.”

After getting the diagnosis in November 2009, Lenney had his left lung removed and underwent chemotherapy and radiation treatments.

He sued Lorillard and Hollingsworth & Vose.

“They attacked my credibility as far as whether I had actually smoked Kent cigarettes,” Lenney said.

In March 2011, Lorillard and Hollingsworth & Vose were found liable by a state court jury in San Francisco.

The judge later ordered them to pay Lenney about $1.1 million in damages.

The companies appealed, and the case was resolved in a confidential settlement.

Dimitris O. Couscouris, a Los Angeles-area resident with mesothelioma, did not fare as well.

Defense lawyers seized on a statement by a plaintiff witness that Couscouris had become too sick to walk. They sent a private investigator to conduct surveillance at Couscouris’ home and videotaped him and his wife getting into their car and making a few stops, including at a restaurant and shopping mall.

In October 2012, a Los Angeles jury found that Couscouris had failed to prove that he had smoked Kents, handing a victory to the defense.

Said Couscouris’ lawyer Trey Jones: “The trial ended up being more of an attack on my client.”

Kent was Lorillard Tobacco’s response to the health scare of the early 1950s, when the link between smoking and lung cancer drew wide attention. Lorillard touted the superiority of its filter, a blend of cotton, acetate, crepe paper and crocidolite asbestos. That asbestos is believed to have caused mes othelioma in factory workers and smokers.

THE PAYBACK Some 13 billion Kents were smoked from March 1952 until May 1956 using the “Micronite” filter containing a deadly form of asbestos. Sixty years later, the legal fallout continues. Lorillard settled roughly 90 cases in a recent two-year period. About 60 more cases are pending.

Tobacco firms to correct statements on dangers of smoking

Greensboro-based Lorillard Inc. is among the companies involved in the agreement with the Justice Department.

Kent was Lorillard’s answer to the health scare of the early ’50s, when links between smoking and cancer first drew attention.

A 1950s Kent ad touts the cigarette’s Micronite filter, which contained a deadly form of asbestos linked to mesothelioma.