Man for all seasonings: The secret to this N.C. A&T's grad success (and special sauce)? Love.
0 comments
Share this
{{featured_button_text}}
1 of 5 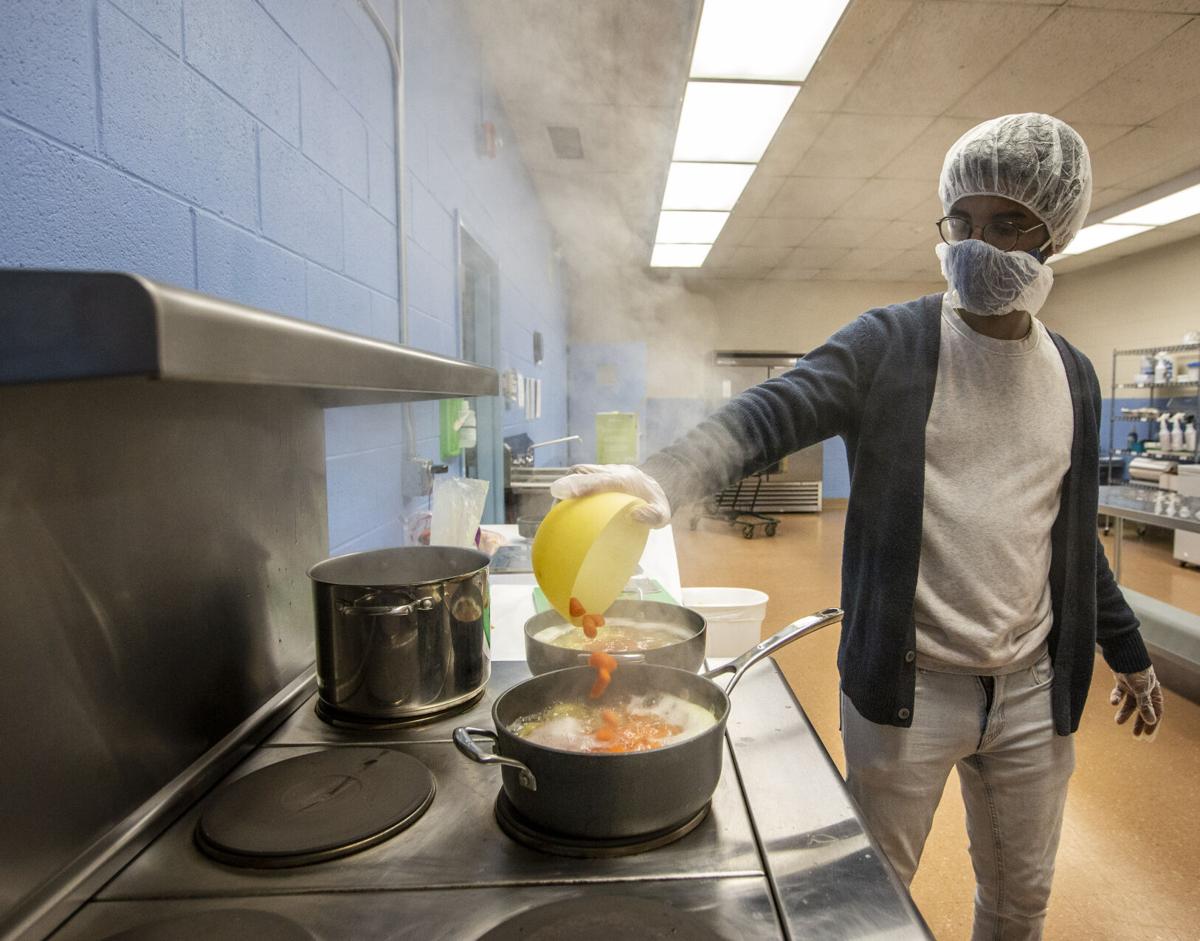 Matt Mullens makes his vegan cheese sauce in the Shared Use Kitchen operated by Out of the Garden Project in Greensboro on March 25. Mullens says he knew as a college student that he wanted to combine business with environmentalism. 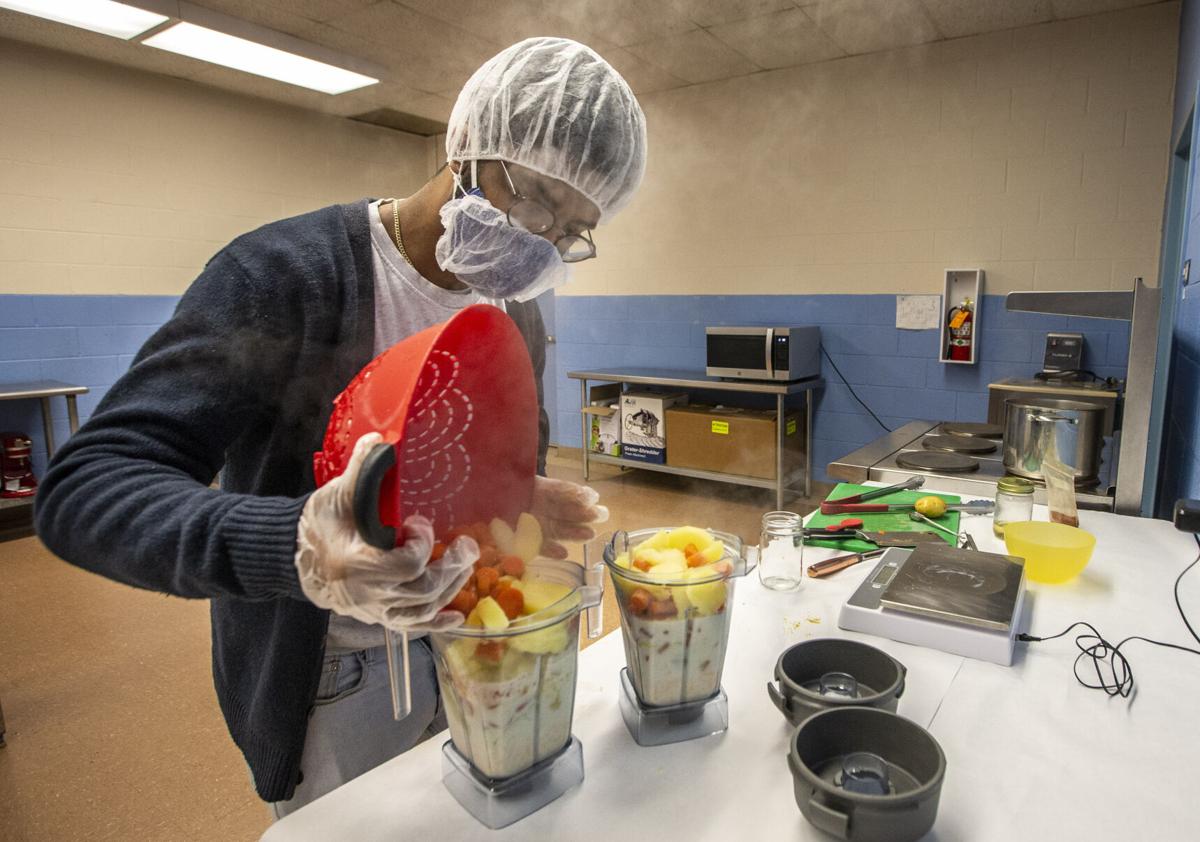 Matt Mullens makes his vegan cheese sauce in the community kitchen. He says he believes the sauce — which sells for $8 in a store, $12.99 online — is good enough for even people who just want to make small lifestyle changes to help the environment. "You don't have to be a vegan," he said, "to appreciate tasty food." 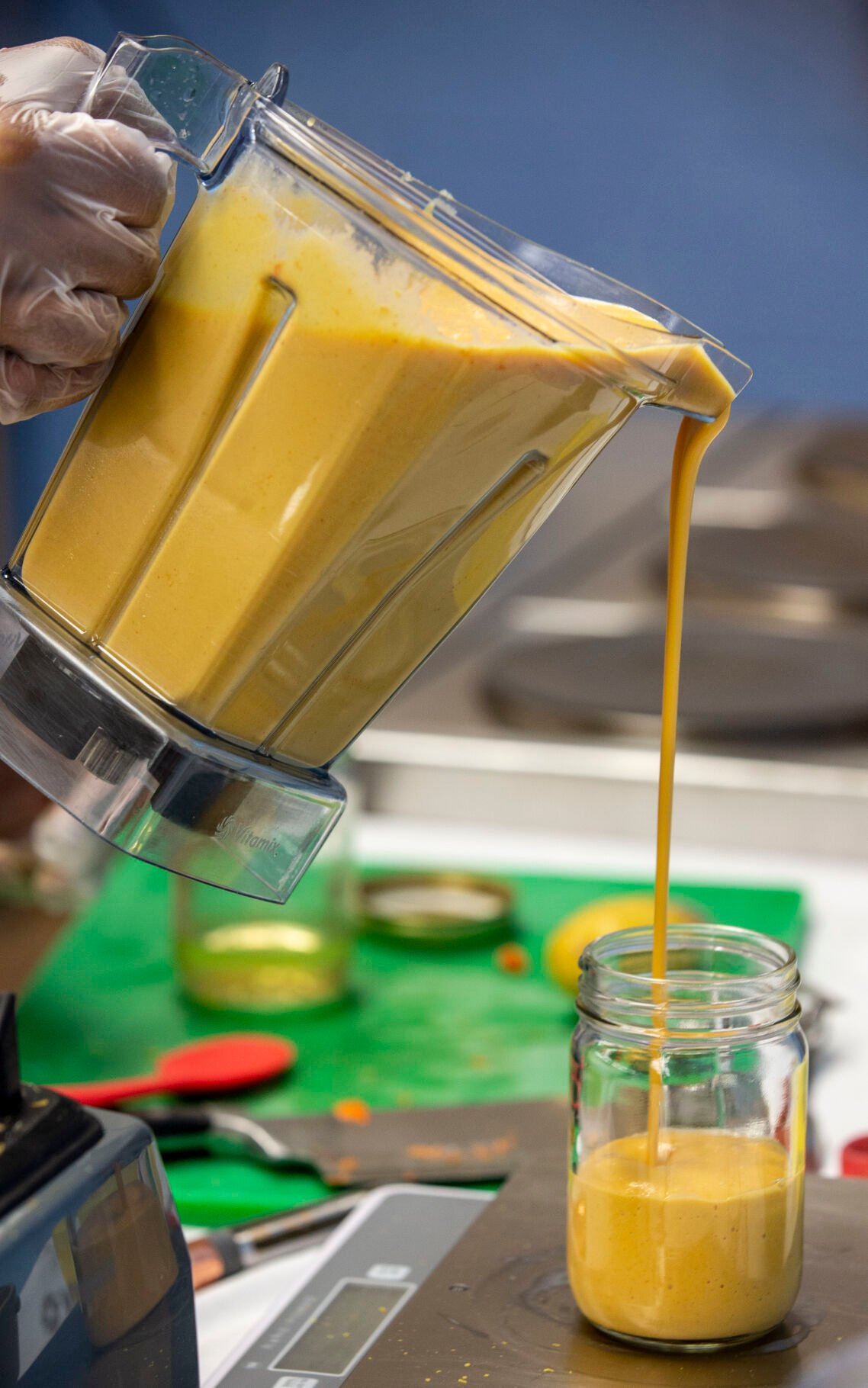 The cheese sauce is vegan, which means it includes no animal products like dairy, and is made purely from plants and seasonings. 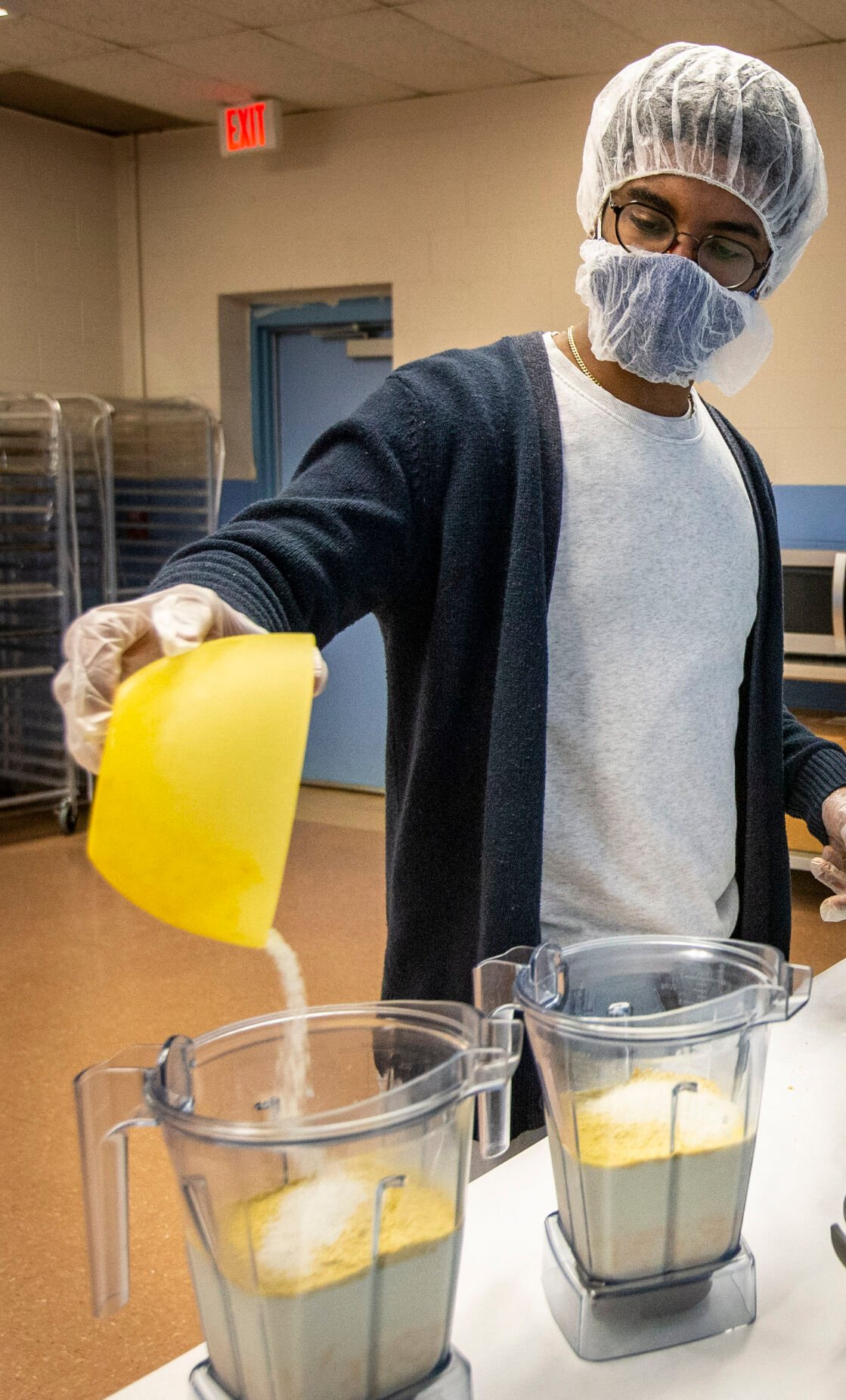 Matt Mullens works on his vegan cheese sauce in the Shared Use Kitchen operated by Out of the Garden Project on March 25. 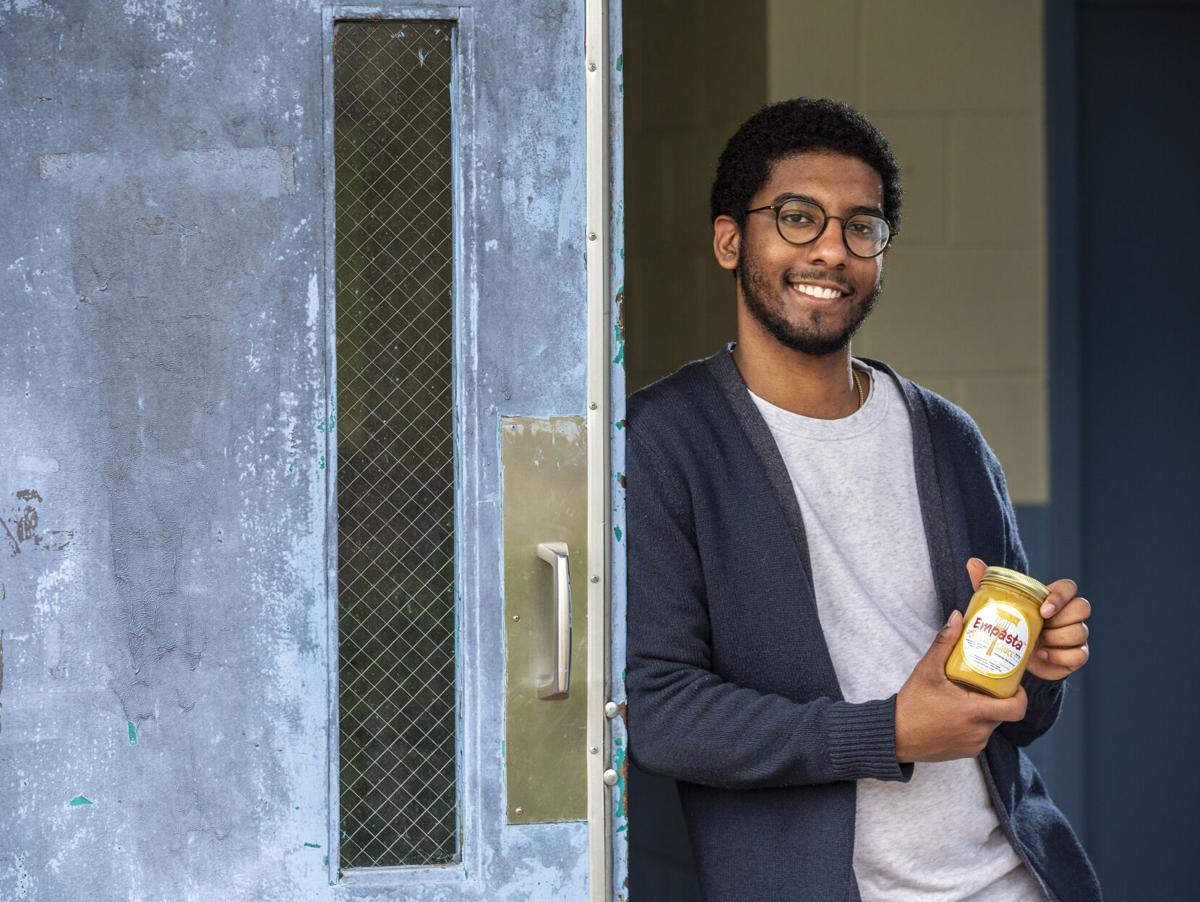 GREENSBORO — In a one-story industrial building on Clifton Road, Matt Mullens has the big kitchen all to himself.

Linoleum floors, steel tables and a stainless steel stove would make anyone feel like a high-end chef.

But there’s nothing fancy about Mullens’ work.

It’s all about the vegan cheese sauce he personally makes to fuel a growing business that is now nationwide. With the help of PayPal, the payment-exchange service, Mullens has seed money he believes is giving his company a solid foundation.

Mullens, 25, graduated recently from N.C. A&T with a degree in industrial engineering. But his first love is the sauce he has spent the past couple of years perfecting.

It’s a vegan sauce, which means it includes no animal products like dairy, and is made purely from plants and seasonings — primarily potatoes and carrots turned into a golden sauce that sticks to pasta like a creamy cheese barely distinguishable from the real thing.

Empasta is the kind of name a big marketing agency might coin, but Mullens thought of it himself.

It has a triple meaning: “em” in Empasta stands for empathy, for the environment, for the people who can benefit from non-dairy products.

“Pasta” from one of the foods that goes well with the sauce.

Empasta because, as he says, it’s an imposter.

Mullens knew as a college student that he wanted to combine business with environmentalism.

He had a couple of internships at the shared entrepreneur incubator on North Greene Street and being around bright, creative people inspired his confidence to move into business.

Just what his product would be was open to debate.

“I was really into environmentalism and sustainability, so that’s where the inspiration really came from,” Mullens said. “I had a couple of solar-panel internships. But as a young college student starting a solar-panel company, it isn’t the most feasible thing to do.”

Food is fundamental, he thought.

“Food, I found out, is the greatest way individuals can have an impact on the environment vs. trying to install a solar panel on your home or switching over to electric vehicles,” he said. “The meat industry and the dairy industry have a large impact. And though not everybody can choose whether or not they have a solar panel on their house or drive an electric vehicle, they can choose what they decide to eat.”

It takes a lot of creativity and trial-and-error to come up with a vegan food that is good enough to fool the eyes and taste buds.

Empasta, Mullens knew, needed the yellow color of cheese sauce, the smooth texture of dairy food and the tangy flavor people want on their pasta or nachos.

So he began to learn about vegan cooking and soon found that cooked potatoes and carrots when blended with the right seasonings and pea milk — yes, milk made from split peas — could form the perfect base for a sauce that doesn’t include any artificial colors or flavors.

He began using old-fashioned boiling water and a blender to create the right texture.

A variety of flavors were used, including nutritional yeast, to add substance to the sauce.

And one more element: reactions from potential customers.

Mullens tried the new food. He gave it to family and friends. And he sold it in small quantities at the Greensboro Curb Market.

Customers — willing test subjects, really — would tell him what they liked and didn’t.

Mullens tested the sauce’s shelf life by leaving samples in his refrigerator for weeks at a time, then bravely trying them for taste and consistency.

Things went so well he persuaded Deep Roots Market in Greensboro, which is community owned, to take plastic deli containers of the sauce to sell.

That worked, and he was able to get space at Buie’s Market, a small local grocery store in Winston-Salem.

Then a year ago the COVID-19 pandemic hit. Not only were farmer’s markets closed, people were wary of going to the grocery store.

Mullens knew he had to find a new distribution channel.

“My bills were still there so I had to think: How do I still deliver to customers?”

So he tried distributing Empasta by mail.

He packaged his deli containers in boxes and began mailing them to friends in Texas and Michigan, hoping they’d remain cold and intact. He experimented with putting cold packs in the boxes. Sometimes rough mail handlers would break open the plastic deli containers inside and customers would receive a mess of sauce in a box.

Mullens began to experiment by pouring the smooth sauce into canning jars with metal lids, boiling the finished jars to get the right combination of presentation and preservation.

He can make his product in the perfect home base — an affordable slot at the Shared Use Kitchen operated by Out of the Garden Project.

Still, he knew he had to perfect distribution. But expanding is expensive. And shipping requires boxes, packing materials and growing quantities of sauce with all the up-front expenses that entails.

Mullens was scrolling Twitter one day last summer when he found out about a PayPal grant program that helps Black entrepreneurs expand their businesses.

A PayPal spokeswoman said the company has made a commitment to promoting racial equality and social justice.

Mullens applied and got a grant last November of $8,500, a relative fortune for a young man holding down a job in information technology while pursuing his dream of being a business owner.

“That was really pivotal and just like a huge catalyst for keeping the business going and allowing me to adapt to this whole e-commerce change,” Mullens said.

Mullens began promoting the business through social media and the sauce began to catch on.

By February, he had 230 orders — a substantial number since he was cooking, blending and packing the sauce by himself in his spare time.

“It’s just kind of been growing organically since then,” he said.

As Mullens considers expansion, he has his eye on partnering with a food truck or restaurant in Greensboro as the economy slowly returns to normal.

His “empathy” objective could be achieved through partnering with local agencies that help people in food deserts with more nutritious options.

“My goal is as an individual to use my talents and skills to have a positive impact on the planet,” he said.

He believes the sauce — which sells for $8 in a store, $12.99 online — is good enough for even people who just want to make small lifestyle changes, who might even use it on a conventional beef burger.

“You don’t have to be a vegan,” he said, “to appreciate tasty food.”

Matt Mullens makes his vegan cheese sauce in the Shared Use Kitchen operated by Out of the Garden Project in Greensboro on March 25. Mullens says he knew as a college student that he wanted to combine business with environmentalism.

Matt Mullens makes his vegan cheese sauce in the community kitchen. He says he believes the sauce — which sells for $8 in a store, $12.99 online — is good enough for even people who just want to make small lifestyle changes to help the environment. "You don't have to be a vegan," he said, "to appreciate tasty food."

The cheese sauce is vegan, which means it includes no animal products like dairy, and is made purely from plants and seasonings.

Matt Mullens works on his vegan cheese sauce in the Shared Use Kitchen operated by Out of the Garden Project on March 25.