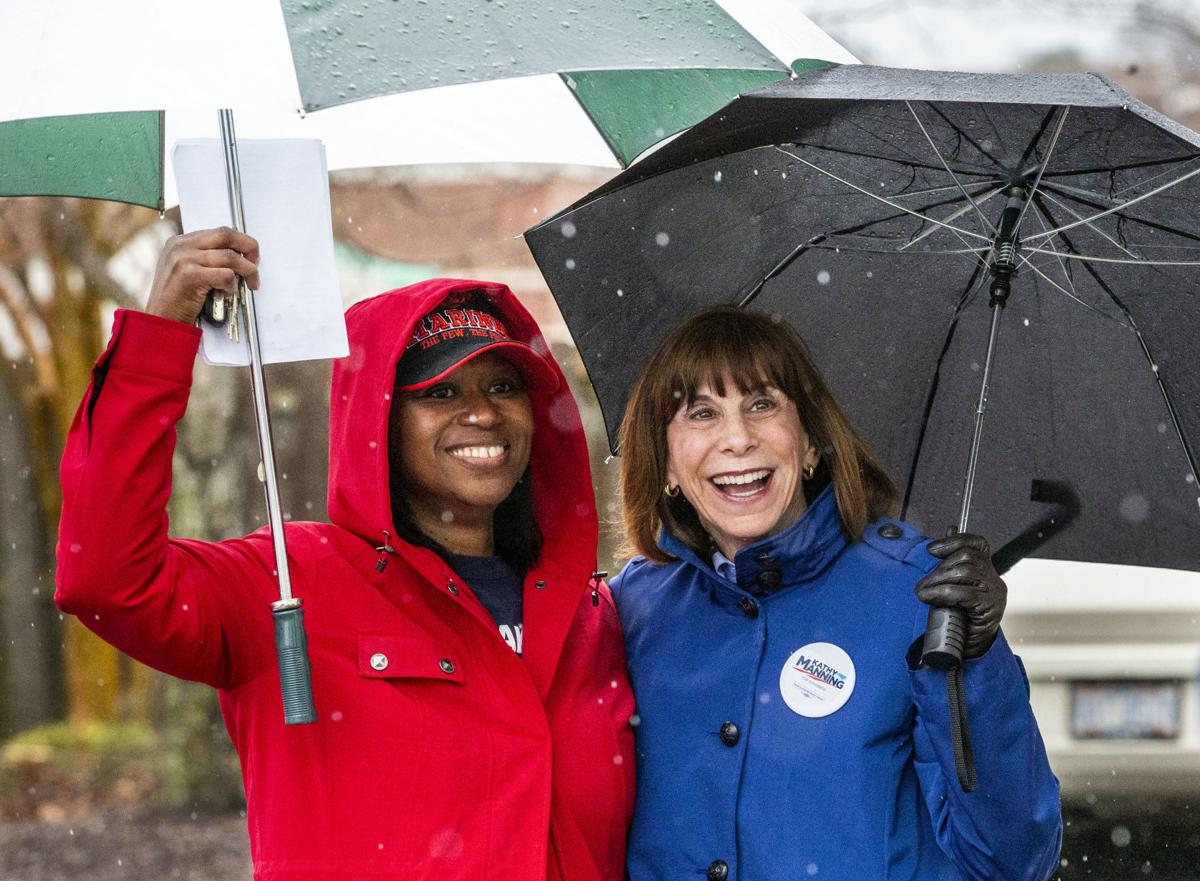 Kathy Manning, right, a candidate for the Democratic nomination for the 6th Congressional District in the U.S. House, poses for a photo with Marcelia "Tootie" Gause at Hillcrest Baptist Church in Greensboro, N.C., on Tuesday, March 3, 2020. 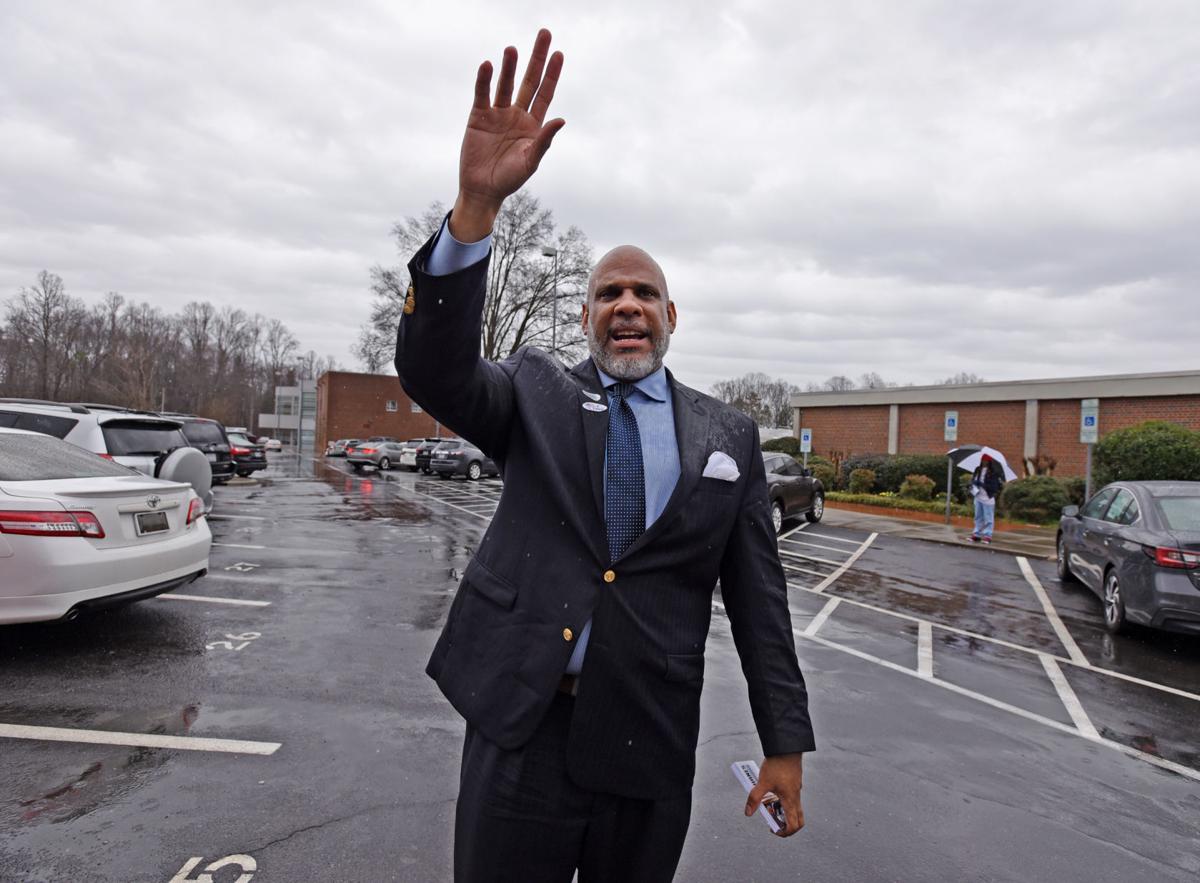 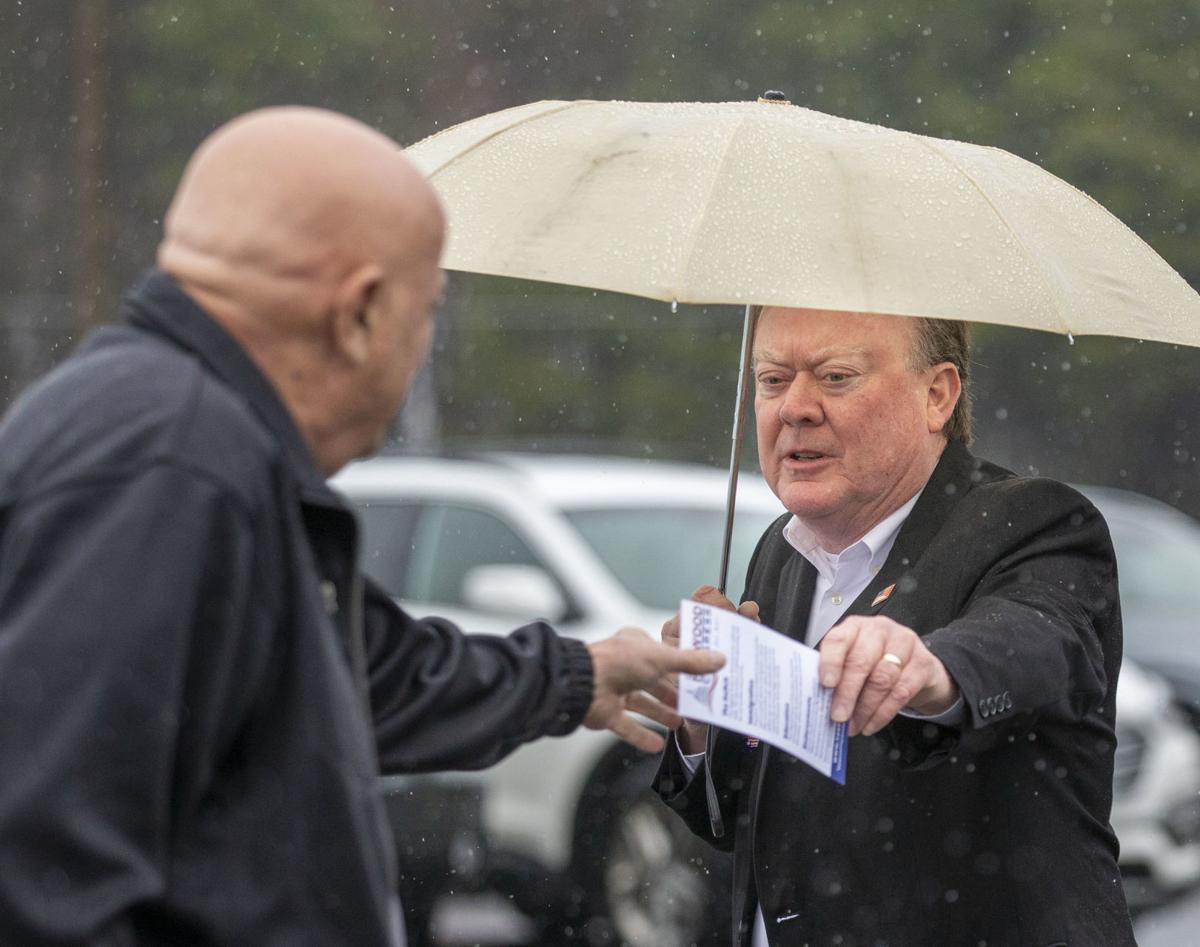 Lee Haywood, a candidate for the Republican nomination for the 6th Congressional District in the U.S. House, campaigns in the parking lot at Smith Grove Baptist Church in Colfax on Tuesday, March 3, 2020.

GREENSBORO — Democrat Kathy Manning and Republican Lee Haywood won their respective primaries Tuesday in the new 6th Congressional District, and will battle each other in the November general election for a seat in the U.S. House of Representatives.

Complete but unofficial returns showed that in a crowded field of five Democratic candidates, Manning — a former immigration lawyer and a community leader making her second run for Congress — avoided a runoff by securing 48.4% of the vote.

Her threshold requirement to win the Democratic primary outright was 30%.

Manning declared victory shortly before 11 p.m., saying voters across the district had issued a mandate for change.

“Our communities deserve a leader who will stand up to President Trump’s hate-filled agenda and fight for our values in Washington," she said in a prepared statement. "The Triad needs a representative who will fight for access to affordable healthcare and lower prescription drug prices, a quality education for all students, and an economy that lifts all parts of our community."

Although the district leans sharply Democratic and Greensboro resident Manning is the presumptive favorite in November, Haywood dominated his race against political newcomer Laura Pichardo of Pelham by an even wider margin.

Well known in local GOP circles, he reeled in 73.3% of Republican ballots in the newly drawn district that spans Guilford and much of Forsyth counties.

Haywood said he was energized by the victory and determined to take the fight to his Democratic rival in the months ahead.

"It's starting tomorrow, I'm not taking any rest," he said in a telephone interview. "It'll be a multi-front attack, a multi-front campaign. I'm determined to keep this district in Republican hands."

Manning and Haywood jumped out to immediate leads in their separate primaries shortly after 8 p.m., when the two counties posted results of early voting and mailed-in absentee ballots across the district.

Manning garnered more than 22,000 of those Democratic ballots for a 48% cut of that initial district-wide tally, which was gleaned mainly from 15 days of early voting that ended Saturday. Similarly, Haywood racked up almost 75% of the district's early Republican vote tally.

Both clung tenaciously to their leads throughout the evening as individual precincts reported the results of Tuesday's voting.

Candidates spent the day following the time-honored tradition of visiting polling places to talk with voters, promote their campaigns and get a sense of what the race's outcome might be.

But when it came to the average voter's awareness of another new congressional district after a decade of shape-shifting boundaries triggered by lawsuits over racial or partisan gerrymandering, candidates found that sometimes the average voter's response Tuesday was one of confusion.

"This is a low-information election," said state Rep. Derwin Montgomery of Winston-Salem, one of two candidates from Forsyth County's part of the newly redrawn district.

Montgomery said he found voters knowledgeable and interested in the presidential primary, but much less aware of the congressional race in the new district that includes all of Guilford County and about 70% of Forsyth County's registered voters.

He said he was spending a fair amount of his time giving voters a basic overview of the new district and what he stood for as a candidate.

GOP candidate Haywood began and ended the day greeting voters at the Sandy Ridge Precinct in Smith Grove Baptist Church on Sandy Ridge Road, one of about a half dozen stops he made to meet and greet.

He said he found voters knowledgeable about the 6th District candidates, but not so much about the district itself.

"I've had a few of them that were wanting to discuss redistricting, but most just wanted to get in and vote," Haywood said.

The new district only came into being late last year after the Republican-led General Assembly approved its new shape as a Democratic-leaning jurisdiction.

Legislators took that action to quell a lawsuit claiming, among other things, that the 6th District's previous format, sprawling across all or parts of eight counties, was unfairly calculated to favor GOP candidates.

Along with the newly redrawn 2nd Congressional District to the east, the fledgling 6th District has a large population of minority voters, urban topography and an overall electorate more likely to vote a Democrat into office come November.

According to recent numbers from the state Board of Elections, the district includes about 238,300 registered Democrats compared to about 133,100 Republicans, or roughly 105,000 more Democrats registered to vote.

The current 6th District incumbent, U.S. Rep. Mark Walker, a Greensboro Republican, considered his options given the new landscape and decided in mid-December not to seek reelection for a fourth term in an environment that included only 22% of voters from his 2018 reelection.

Already well known from her 2018 congressional race in the 13th Congressional District — when that district included much of Guilford County — Manning raised more than $800,000 in campaign contributions by early February and mounted an extensive TV advertising campaign.

The other Democrats mounted advertising campaigns but without the frequency and sustained intensity of Manning's effort.

At forums, the five Democratic candidates talked mainly about their different levels of political experience and accomplishments on behalf of the public. But they held similar positions in their support for such hot topics as health-care reform.

A relatively new Greensboro resident, first-time candidate Foxx turned in a surprisingly strong performance against seasoned Democratic opposition, taking second place with 19.9% of the vote to best opponents who all had held public office before at the state or county level.

Davis finished third with 15.1% of the Democratic vote, followed by Montgomery who amassed 12.4% and Hanes with 4.3%.

On the Republican side, Haywood said that he stepped into the gap created by Walker's decision not to run because he felt it was his time to emerge from the behind-the-scenes role he had played for years as a Republican Party official.

Until he declared his candidacy, the Summerfield businessman had been chairman of the 6th Congressional District Republican Party.

Pichardo, a financial analyst, said that her chief interests in holding public office centered on getting the national deficit under control by such measures as expanding the use of solar energy by government buildings.

Like the Democrats, the two Republicans did not differ greatly on many issues. But Pichardo, 28, was hampered by the fact that she does not live in the new district.

She lives in Pelham, a small Caswell County community, which was part of the 6th District before it was redrawn at the behest of the court system.

Federal law does not require members of Congress to live in the district they represent, only the same state. But voters tend to look askance at candidates residing elsewhere.

Election roundup: Jenkins ousts Gladden from school board; Manning, Haywood to face off in 6th District

Kathy Manning, right, a candidate for the Democratic nomination for the 6th Congressional District in the U.S. House, poses for a photo with Marcelia "Tootie" Gause at Hillcrest Baptist Church in Greensboro, N.C., on Tuesday, March 3, 2020.

Lee Haywood, a candidate for the Republican nomination for the 6th Congressional District in the U.S. House, campaigns in the parking lot at Smith Grove Baptist Church in Colfax on Tuesday, March 3, 2020.