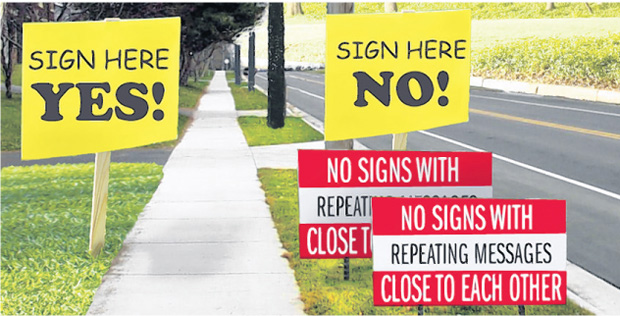 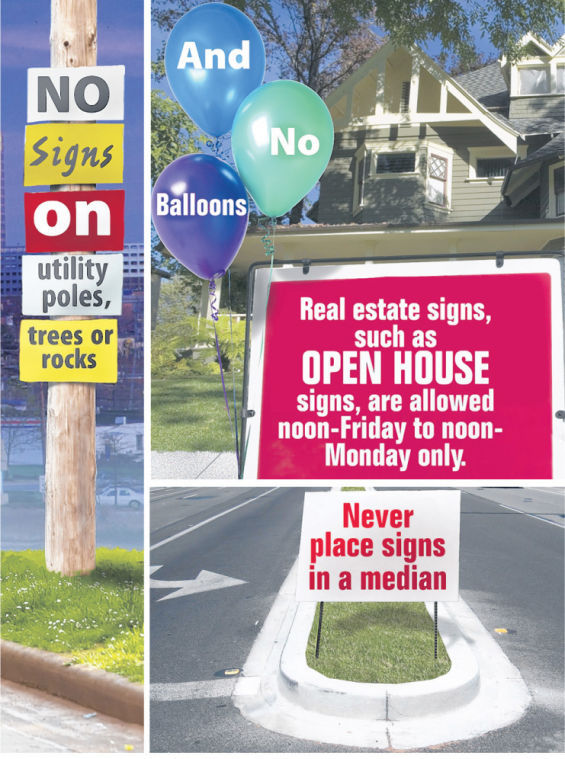 GREENSBORO — You’ve probably seen some of these signs.

The open house signs that have balloons. The strobe light signs and giant inflatable dancing men in front of businesses.

They are posted in medians, on telephone poles, in front of sidewalks and on trees.

The city is filled with signs that are posted illegally — only many people don’t know that.

The city produced brochures this month to distribute to businesses and residents to educate them on the proper placement of signs.

And don’t laugh. Without regulations, some businesses will use so many signs that they impede other businesses’ rights to advertise, said Sue Schwartz, the city’s director of planning and community development.

Improperly placed signs can pose a safety hazard as well.

Take signs placed along the median, for example.

“There’s a serious safety concern if you can’t see around them,” Schwartz said. “If you’re in the right of way, we have a right to confiscate it, period.”

After illegal signs popped up all over Greensboro advertising tax services near the start of 2013, Schwartz said the planning department decided to do something.

So, her departments began coordinating with other ones to remove illegal signs across the city.

“With lot cleanup and the renewed focus on housing code, there’s not a lot of spare time,“ Schwartz said. “We genuinely don’t have a lot of folks.”

For example, maintenance workers used to remove illegal signs, mow lawns and then put them back because they didn’t know they were illegal, Schwartz said.

Now when they pick up those signs, they get rid of them.

Stan Meyer, 68, has been fighting illegal signs in Greensboro for years. He said the signs drive him crazy because the rules are blatantly ignored, and numerous signs in one place are just tacky.

So tacky that he recently went up and down Battleground Avenue distributing the new pamphlets to businesses, especially mattress stores, which he said are a frequent offender.

But days later, driving down Battleground he saw no difference in the number of signs.

It highlights something Schwartz pointed out as one of her biggest challenges: City employees usually don’t work on weekends and businesses know that.

When someone violates the ordinance, they are given a notice and 15 days to correct the offense.

If not corrected, the offender is fined $50 for the first offense with escalating penalties.

Signs that are prohibited

Prohibited signs in all zoning districts:

* Series of two or more signs with the same message

* Signs that cause an obstruction in any street or driveway

Christopher Spencer was taken into custody without incident in Kernersville and made his initial appearance in U.S. District Court in Greensboro.

Even some who didn't support Biden during his campaign for president voiced their support for a positive four years. "I didn't vote for him," said Justin Little of Ramseur, "but I hope he is the best president we’ve had."

"We must do more than just say there is a problem," said the Rev. Lei Washington, principal of Gillespie Park Elementary in Greensboro.

John Shelton, longtime emergency services director for Surry County, was remembered Monday for his professionalism and his dedication to his work.

Greensboro Coliseum Complex income down by $7.5 million because of pandemic

Since the COVID-19 pandemic hit the state in March 2020, hundreds of events at venues everywhere have been canceled, postponed or rescheduled.

Some Winston-Salem residents see a double standard in how law enforcement officers treated rioters inside the Capitol on Jan. 6 and Black Lives Matter protesters last summer.