Barrett on record: Find out where court nominee stands on issues that matter to you

Northern Guilford principal rides bike to honor her seniors, one mile at a time
0 comments
Share this
Return to homepage × 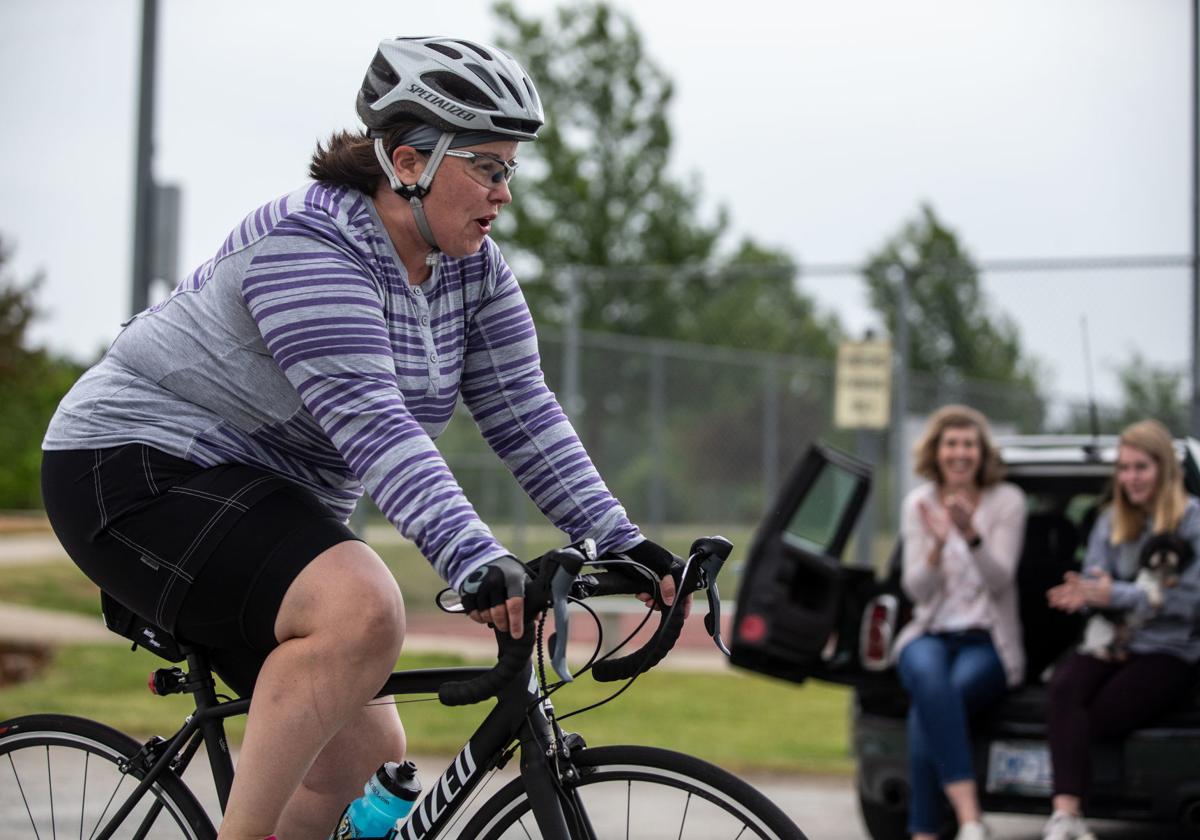 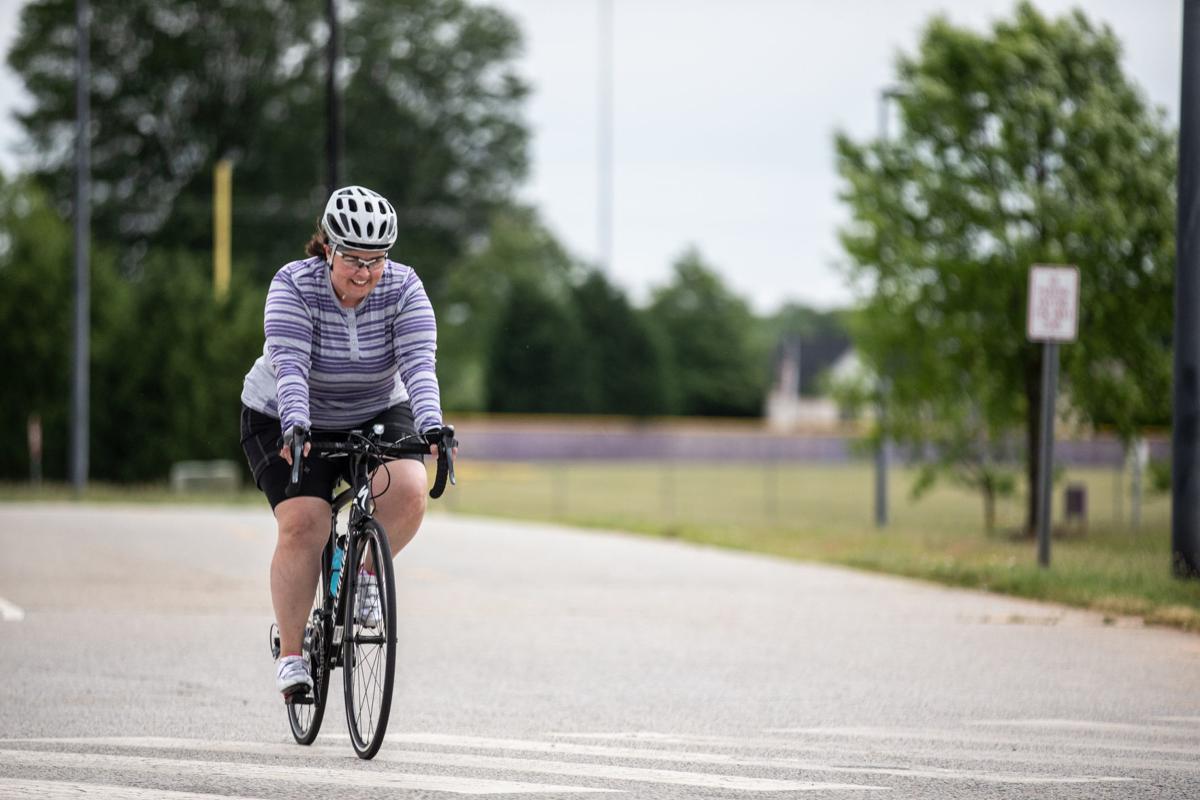 Principal Janiese McKenzie rides her bike at Northern Guilford High School on Friday. Her goal is to ride 345 miles, one for each student in Northern’s Class of 2020. 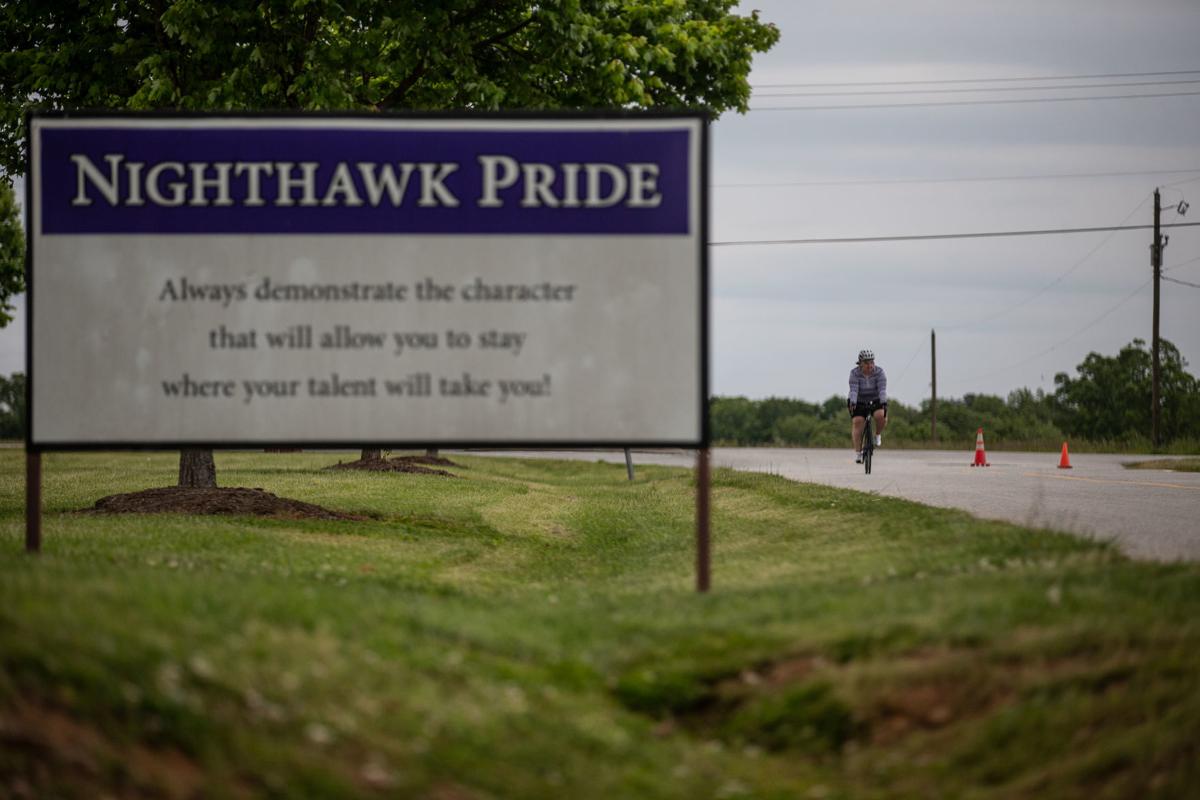 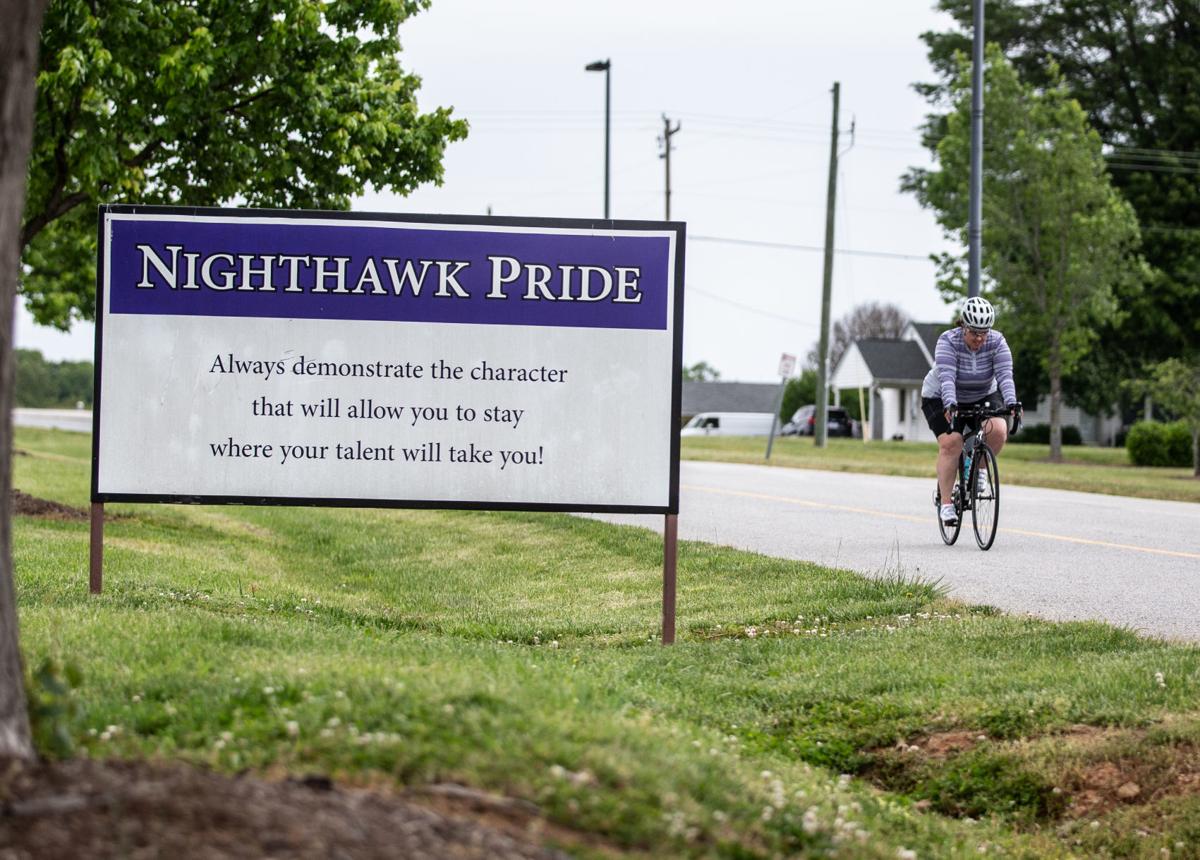 Principal Janiese McKenzie rides her bike at Northern Guilford. McKenzie has a master list of every senior in the Class of 2020. Each day, she writes down a handful of names on a note card and attaches it to the cue-sheet holder on her bike frame, a checklist for her ride. 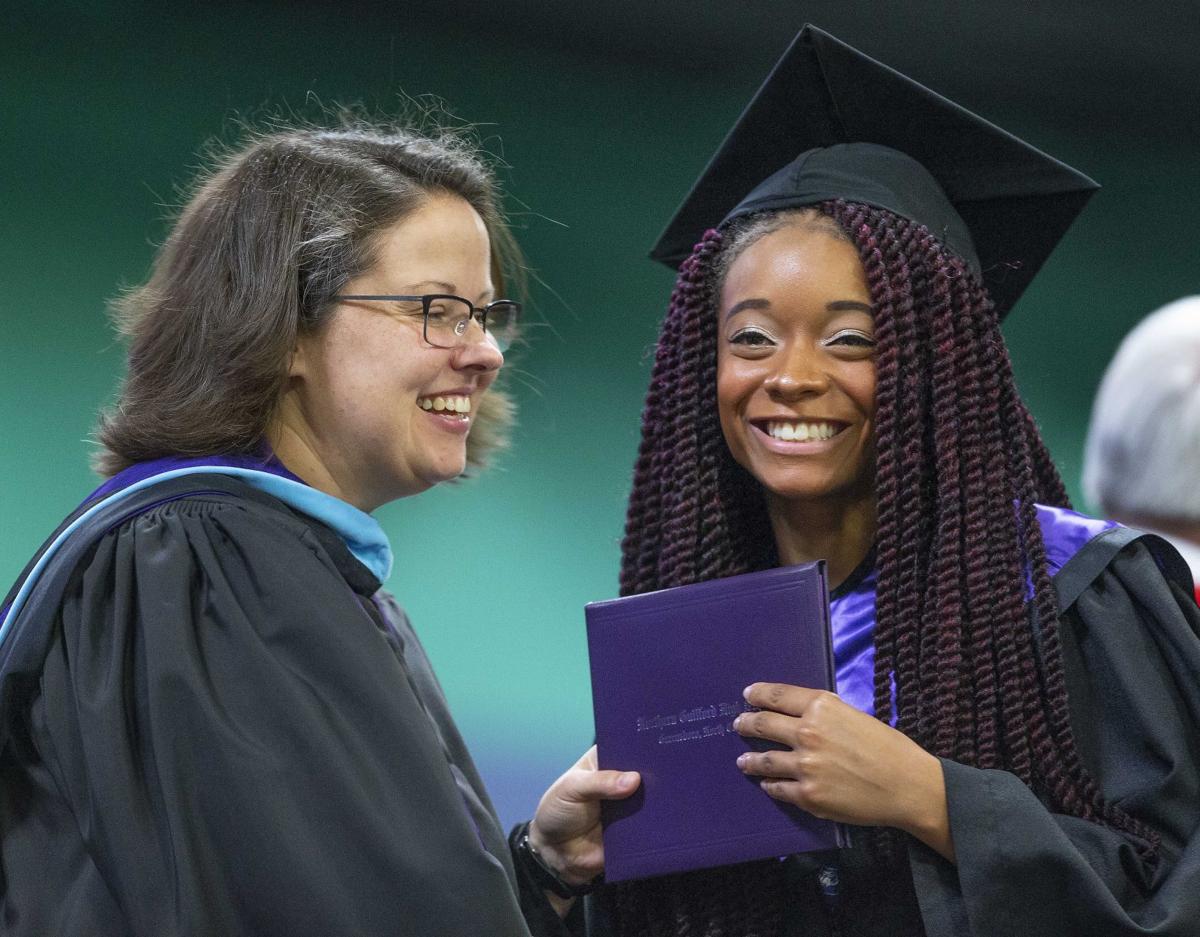 McKenzie handed out more than 340 diplomas during commencement ceremonies for Northern Guilford High School seniors in 2018.

GREENSBORO — When she’s in the saddle, her legs pumping the pedals that power the bicycle, Janiese McKenzie travels through time itself, her mind wandering back to the days B.C.

It’s not that long ago, really. Right around eight weeks since March 16, the first day Guilford County Schools traded classrooms for distance learning because of the global pandemic.

But at times it feels like an eternity to her.

And so she rides. Every day. Rain or shine.

For 45 minutes, McKenzie turns laps around the school property off Spencer Dixon Road, a trail three-quarters of a mile long. Her goal is 460 laps before June 5, which would’ve been the last day of school.

“I knew it was really crushing to the seniors,” McKenzie says. “They’re missing that final piece. They’ll never be back in their high school as students. And it all happened so abruptly. I wanted to do something that would honor each and every one of them.”

She’s been at Northern Guilford ever since the high school opened, first as a teacher, later as an assistant principal and the last four years as principal.

Most of these seniors are part of the first class that’s attended Northern Elementary, Middle and High schools from kindergarten through 12th grade.

“It’s a neat group,” McKenzie says, “and they’re my first group as principal that we’ve gone through all four years (of high school) together. They’re a special group to me because of that. They’re my kids. And we’ve had a good relationship.”

It’s that relationship that prompted her daily ride.

McKenzie wanted to do something to recognize each senior, but she knew she couldn’t — and shouldn’t — visit 345 homes during the pandemic.

She used to cycle for fun and exercise, joining weekend charity rides or competing with triathlon teams. But the hobby fell by the wayside when she became a school administrator and the job demanded more of her time.

McKenzie’s bicycle, a Specialized Allez road bike with Terry Butterfly Ti saddle, was gathering dust in a storage shed until this ride began.

“I started slow, just 10 laps a day, because I’m way out of shape,” McKenzie says. “I wanted to do something that required a little bit of physicality because — and this may sound really weird — I wanted there to be a little pain involved. I knew I’d be sore when I started, but I wanted to understand the kids’ emotional pain and transfer into more of a physical pain.

“There’s also that sense of victory, of overcoming. When I finish all 345 miles, I’ll know that every kid has crossed my mind and I’ll have called their name, whether it’s at graduation or not. Because every kid in this class matters. They all matter.”

Each mile of McKenzie’s ride last between four and five minutes. She finds a sense of peace when she rides, a calm that washes over her like a gentle summer rain.

In those few minutes, she thinks of one senior and one senior only, calling out the student’s name at the start of the mile.

“It’s different, I know, but I wanted it to be about them,” McKenzie says. “When I ride each mile, I think about my experiences with each kid. At the start, I say a little prayer for their future and that they’re doing OK right now. Then I’m alone with thoughts about them for the rest of the mile. I keep going, on to the next one.”

McKenzie has a master list of every senior in the Class of 2020. Each day, she writes down a handful of names on a note card and attaches it to the cue-sheet holder on her bike frame, a checklist for her ride.

When she passes the visitor parking lot, she calls a name to anyone there. And a handful of people have been there to hear those names, something McKenzie didn’t expect at the start.

“It’s been received in a different way than I anticipated. I never thought anyone would come out and watch me ride in a circle,” she says. “But it’s been kind of cool to see people there. So what I’ve started doing is putting out on the school’s Facebook page who I’m riding for the next day. So if they want to come out, they can. I’ve been doing social-distancing pictures, if they or their parents want one. … The main thing is to acknowledge each kid, what they’ve done and what they’re not getting to do.”

In education, there are triumphs and tribulations. You win some. You lose some. But behind each win and loss is a young life of its own.

McKenzie has thought about those lives a lot in her empty school building these last two months.

“Most of my day I’m here in my office, working on the matrix, responding to I-can’t-even-guess-how-many emails,” she says. “I have people coming to pick up laptops. I have people coming to do driver’s eligibility certificates. We’re going to have a yearbook distribution before too long. We’ll do a drive-by graduation thing on the 5th (of June). … I don’t go out there into the building much, because it is eerie. I’m a very relational person, and it makes it worse, missing the kids and missing the staff.”

There’s time to gather her thoughts for the afternoon’s ride. Some students she knows very well. Others are quiet or shy, harder to know.

“I know them all, but with some of them, I just don’t feel like I know enough about them,” McKenzie says. “That makes me sad. I’ll come in my office and pull them up on PowerSchool and do a little research, see what courses they’ve taken. Are they my artists? What are their interests? You can tell sometimes by the courses they’ve taken, what their specialty areas are as seniors. Are they in drafting, engineering, architecture, networking or computer science (courses)? You can get a little picture of who they are.”

Some thoughts are heartwarming. Others are heartbreaking.

“I think a lot about them, and I worry. I wonder how they’re doing,” McKenzie says. “One kid I rode for the other day just found out his mom has cancer. His grandfather recently passed away, and he’s not going to make it, not going to graduate. That’s one that really tears at your heart, and you spend that whole mile trying to send positive thoughts his way. …

“I have one who just came back for fifth year of high school at 19, and he’s going to make it. He met the graduation requirements. … We just had one win the Trinity (scholarship) to go to Duke, and I can’t hug her and congratulate her. Her dad passed away a little while ago, and I know this is super meaningful to her. Her dream was go to Duke, and now she’s going to get to because of the full ride.”

The boy who survived a car accident and is headed off to Hampden-Sydney to play football.

The girl who plans to run track at UNC-Charlotte.

The boy who earned a full college scholarship through Navy ROTC.

“These are the things I think about out there,” McKenzie says. “I think of them one right after another. … I can remember the smiles, laughs we’ve had. This group has made a lot of good memories.”

All of those memories were made in the time B.C.

And Janiese McKenzie rides to honor them.

“There’s a silence when you’re riding a bike,” she says. “It’s a place where you don’t hear anything else; you’re just inside your own head. I’m riding in a circle and don’t have to worry about finding my next turn. That’s the cool part of this, is finding those moments, those four or five minutes, to put that one kid in your head and remember what they’ve done. It becomes a conversation, in a weird way. And my end of it is always, ‘I hope you’re doing well.’”

The cumulative number of cases in Guilford County exceeds 700. Only four other N.C. counties have reported more.

In the weeks since schools closed to students, Janiese McKenzie rode one mile for each student in Northern's Class of 2020.

Principal Janiese McKenzie rides her bike at Northern Guilford High School on Friday. Her goal is to ride 345 miles, one for each student in Northern’s Class of 2020.

Principal Janiese McKenzie rides her bike at Northern Guilford. McKenzie has a master list of every senior in the Class of 2020. Each day, she writes down a handful of names on a note card and attaches it to the cue-sheet holder on her bike frame, a checklist for her ride.

McKenzie handed out more than 340 diplomas during commencement ceremonies for Northern Guilford High School seniors in 2018.