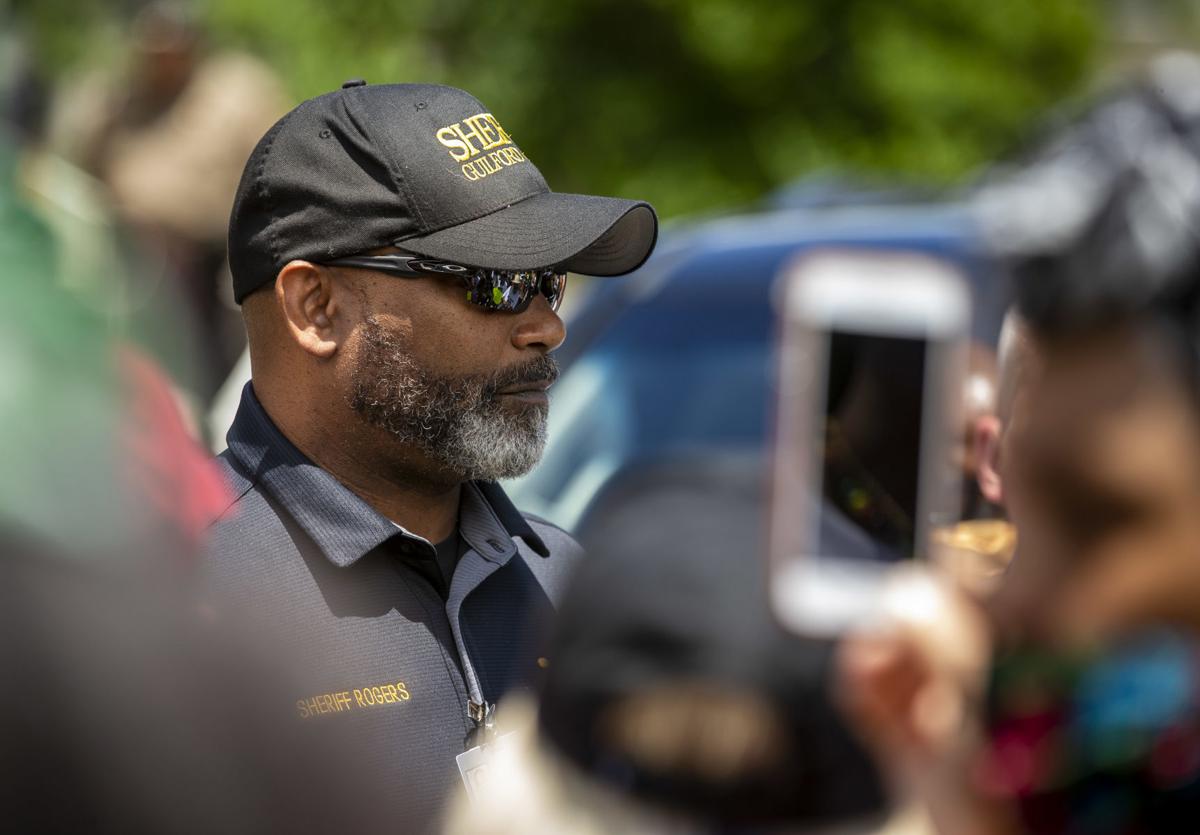 “Our goal is to make sure we get voices heard,” Guilford County Sheriff Danny Rogers said, referring to the diversity he is seeking in members of a new community-input group. Here, he listens on June 24 to demonstrators wanting more details about a jail death. 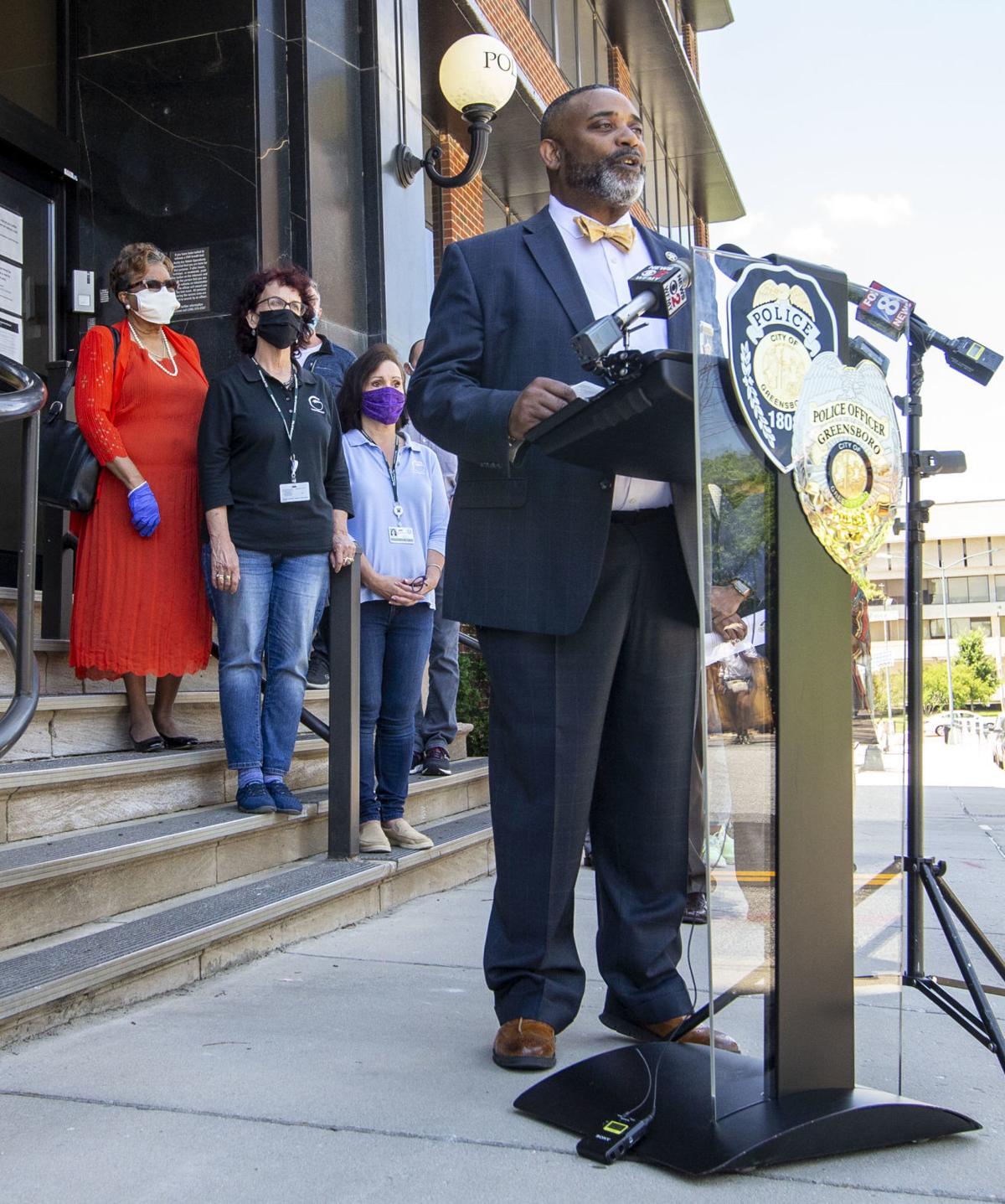 GREENSBORO — Guilford County Sheriff Danny Rogers is looking for input from the community that could be used to alter policy at the sheriff’s office and the county’s jails.

Rogers said he is looking for a diverse as possible group to form the Guilford County Sheriff’s Local Residents’ Advisory Roundtable, which will consist of 12 members.

“One voice is not enough,” Rogers said at Thursday’s interest meeting. The meeting drew about 25 people and included a teacher at Grimsley High School, a minister, a student at N.C. A&T and Greensboro City Councilwoman Marikay Abuzuaiter.

“Our goal is to make sure we get voices heard,” Rogers told the group.

He said he also wants people to bring love and empathy to the roundtable, adding, “I’ve had about enough hate as I can handle.”

The sheriff’s office is seeking members with different backgrounds and experiences.

“I don’t know what goes on in certain areas of the white community, Black community, Latino community,” Rogers said. “I don’t. We have to have people who can help us reach those individuals.”

Advisory board members will be able to express concerns, make suggestions and ask questions about sheriff’s office policy and procedures during the roundtable meetings, which Rogers said will likely be held once every other month.

The advisory board, which has been planned for a while, is not in response to the recent protests over racial and social injustice, Rogers said. After the Memorial Day death of George Floyd, a Black man who died while being restrained by a white Minneapolis police officer, police policy and procedures nearly everywhere have come under fire, sparking protests locally, nationally and worldwide , and furthering the Black Lives Matter movement.

“We’ve seen in the last month the civil unrest,” Rogers said. “We’ve heard the protesters across America. I go somewhere, they always ask me a question ”: Do Black lives matter?

“You know, I’m 56 years old and I’ve been Black all my life,” he said. “I tell them, ‘Yes, Black lives does matter,’’’ but he said he also understands the perspective of “all lives matter.”

Rogers told community members about an instance a few weeks ago when he was “chewed out” by a group of people because “they don’t like police.”

Rogers said he told the group, “You can’t blame or fault everybody for one or two entities’ issues. It’s not everybody’s fault.”

The Rev. Greg Drumwright of the Citadel Church and Campus Ministries of Greensboro urged Rogers to be careful in his wording.

“To many, it’s not that simple,” Drumwright warned.

He later added: “There is a lot of concern around law enforcement reform all over the country, and Guilford County is certainly not an exception to that.”

Though the roundtable isn’t marketed as a response to recent unrest, several people who attended Thursday’s interest session stressed that focus needs to be applied to the current movement and bridging the gap between law enforcement and communities before any other issues can be tackled.

When asked how he would measure the success of the advisory group, Rogers said he would look at the effect on everyone’s lives in the community. In response, a student from N.C. A&T suggested that Rogers instead look to measure the success by “something that’s quantifiable, something you can put into numbers.”

What will it do?: While still in the early stages, here's a look at initial goals for the group:

Want to join?: Applications accepted until July 26. The sheriff's office will let applicants know by Aug. 10 if they've been chosen or not.

“Our goal is to make sure we get voices heard,” Guilford County Sheriff Danny Rogers said, referring to the diversity he is seeking in members of a new community-input group. Here, he listens on June 24 to demonstrators wanting more details about a jail death.