Policy changes on 'hog-tie' but no ban on the restraint for Forsyth sheriff's office. Issue arose after John Neville's death.
0 comments
Share this
Return to homepage × 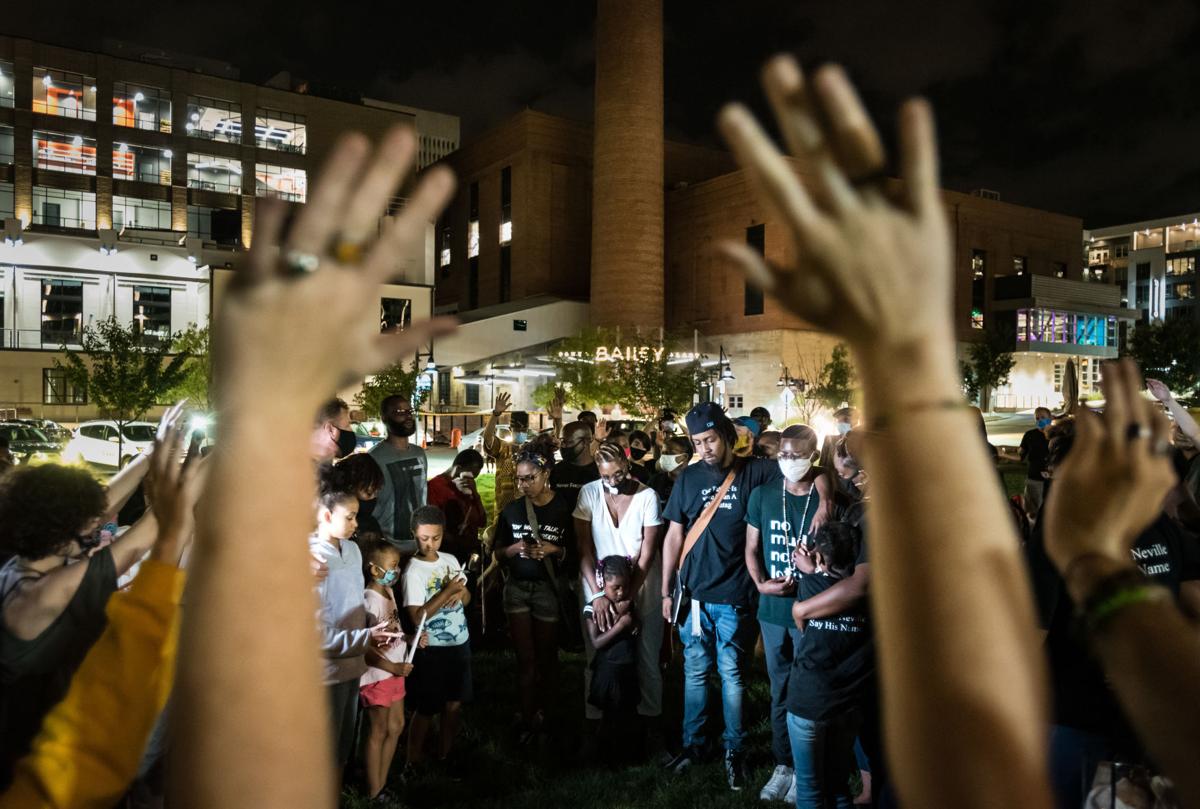 Demonstrators surround and spread love to John Neville’s family during a vigil for Neville on Wednesday in Bailey Park. Neville’s death Dec. 4, 2019, has sparked protests around Winston-Salem during the past several weeks. 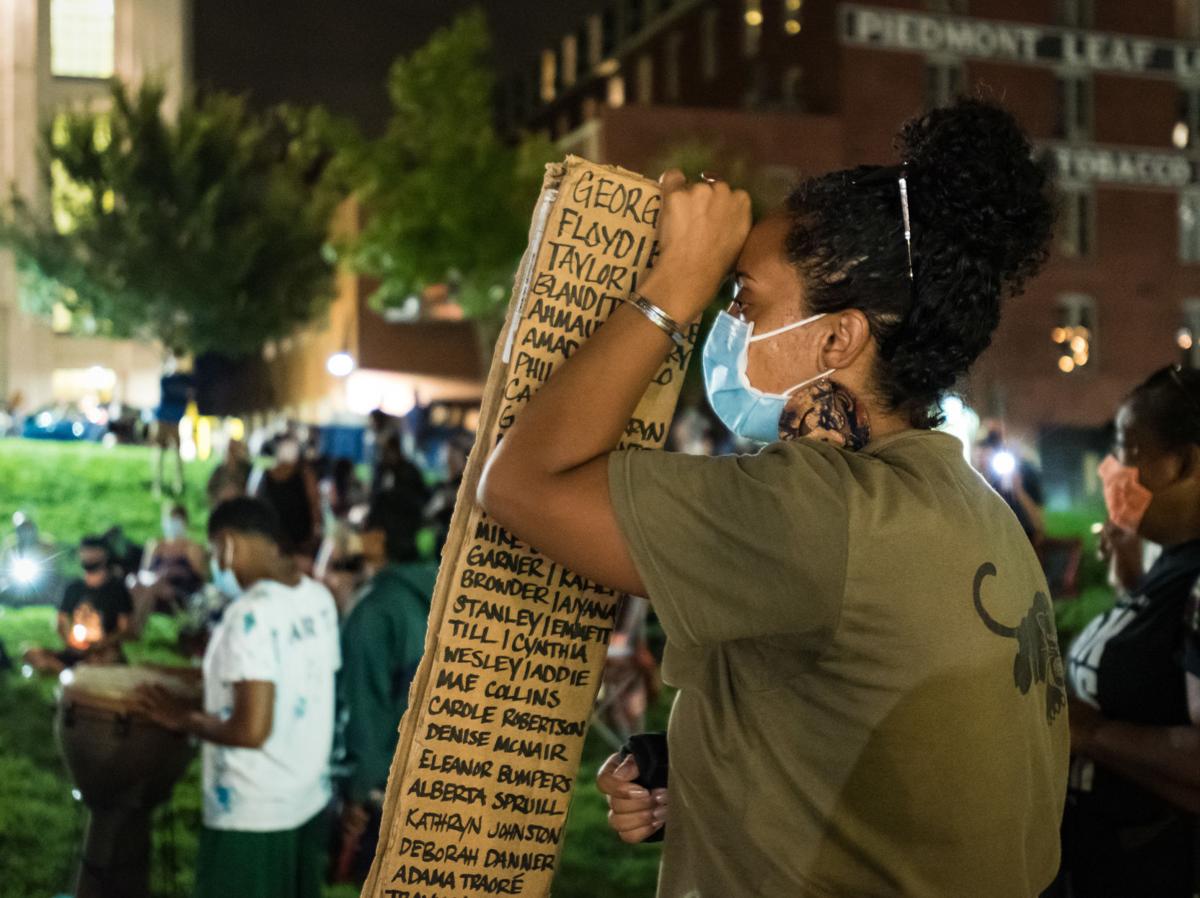 Brittany Battle leans against a poster she made during a vigil for John Neville on Wednesday in Bailey Park. 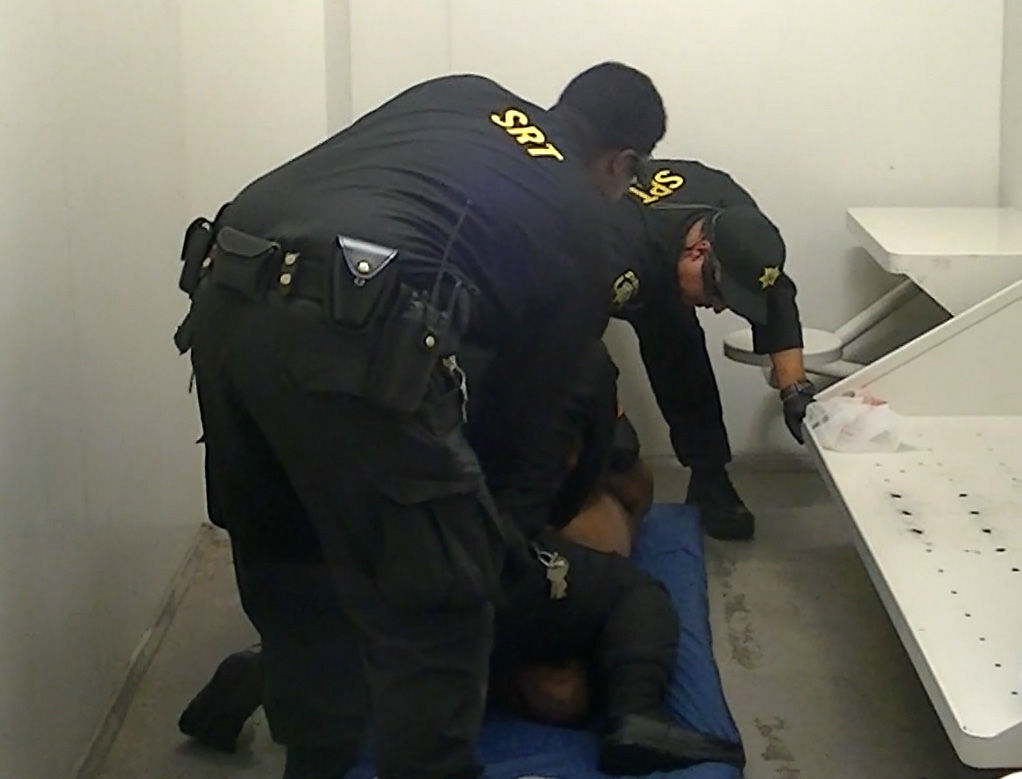 In a screen capture made from body camera footage, Forsyth County Detention Center Special Response Team members place John Neville in the hog-tie position after Neville had a medical crisis on Dec. 2, 2019.

The Forsyth County Sheriff's Office has changed its policies on the use of the "hog-tie" prone restraint that led to the death of John Elliott Neville in December 2019 but has not banned it, according to documents obtained by the Winston-Salem Journal through a public-records request.

Photos: Vigil for John Neville in Winston-Salem on Aug. 5

In a video released Wednesday, John Neville, 56, said, "I can't breathe," at least 28 times over the course of three minutes while he was on his stomach in a cell, handcuffed with his arms behind his back and his legs up toward his buttocks. Detention officers told him repeatedly to calm down as they worked to remove the handcuffs. After a handcuff key broke, detention officers unsuccessfully used another handcuff key and a bolt cutter before getting a second set of bolt cutters to remove the handcuffs.

Neville died Dec. 4, 2019, at Wake Forest Baptist Medical Center. An autopsy report said he died from a brain injury caused when his heart stopped and his brain was deprived of oxygen. He asphyxiated while being restrained with his arms behind his back and his legs folded up, often referred to as "hog-tied." It would be nearly 20 minutes from the time that detention officers placed Neville, who had a spit-mask over his head, on his stomach in the cell before CPR was performed, according to two videos released to media organizations on Wednesday.

Neville's death has sparked protests, including an occupy movement led by Triad Abolition Project at Bailey Park over the past several weeks. Among the demands is that the sheriff's office ban the "hog-tie" restraint. The Winston-Salem Urban League and the ACLU of North Carolina has joined in those demands. Kathy Manning, a Democratic nominee for the Sixth Congressional District, has also called for a ban. In a statement Thursday, Mayor Pro Tem Denise D. Adams said Neville was "treated like a dangerous animal" and called for "transparency, accountability, real change, and justice."

Sheriff Bobby Kimbrough Jr. did not immediately respond to a question Thursday about whether he planned to ban the restraint.

Angaza Laughinghouse, field manager for the ACLU of North Carolina, said the policy changes don't go far enough. He said he wants the hog-tie restraint banned and he would like to see what specific consequences are there for officers who fail to intervene when other officers are using excessive force. Detention officers' desire to remove Neville's handcuffs was elevated above Neville's "health and safety and life at that moment." And, he added, it doesn't appear that the sheriff's office conducted an internal review of the incident. Kimbrough said he called for an investigation by the State Bureau of Investigation the day after Neville died.

"(Neville) was being tied up and held down as if he was a danger to others, as if he was attacking other officers when in fact, he needed the help," House said.

The policies were updated on July 9, according to the documents. According to the policy changes, people who are resisting and have to be placed in a prone restraint position have to be placed in a sitting position as soon as possible. Officers also are required under the policy to monitor "the person's color, breathing and level of consciousness."

"If an individual claims physical distress, medical personnel must be immediately requested to evaluate," the policy said.

The policy also says that if an officer must use their body weight to control someone in the prone position, that officer "shall exercise extreme caution and shall immediately remove their weight as soon as restraining devices are applied." Officers should avoid sitting or placing their knee on a person's head or neck, the policy says.

And officers must "immediately call for medical personnel if an individual does not demonstrate 'a functional level of consciousness.'" That means voluntary movement or speech.

The policy changes also requires officers to intervene if they see another officer engaging in excessive force and gives medical personnel full autonomy during medical emergencies. Kimbrough has previously mentioned that he will have detention officers undergo medical training. That training will be conducted by Forsyth County Emergency Management.

Laughinghouse said all county jail policies are not the same but most involve some common-sense measures about how to approach an inmate who is having a medical emergency. One is that detention officers immediately call for a medical professional.

"When people, black people and people of color, are held and restrained by the police, no matter how much we protest and plead, those calls seem to fall on deaf ears by officers," he said.

The first round of cameras — about 30 — started being phased into the jails in Greensboro and High Point on Tuesday. In a press conference Tuesday at the jail in Greensboro, Sheriff Danny Rogers said the addition of cameras worn by detention officers will help bring the sheriff’s office “up to the 21st century.”

Demonstrators surround and spread love to John Neville’s family during a vigil for Neville on Wednesday in Bailey Park. Neville’s death Dec. 4, 2019, has sparked protests around Winston-Salem during the past several weeks.

Brittany Battle leans against a poster she made during a vigil for John Neville on Wednesday in Bailey Park.

In a screen capture made from body camera footage, Forsyth County Detention Center Special Response Team members place John Neville in the hog-tie position after Neville had a medical crisis on Dec. 2, 2019.