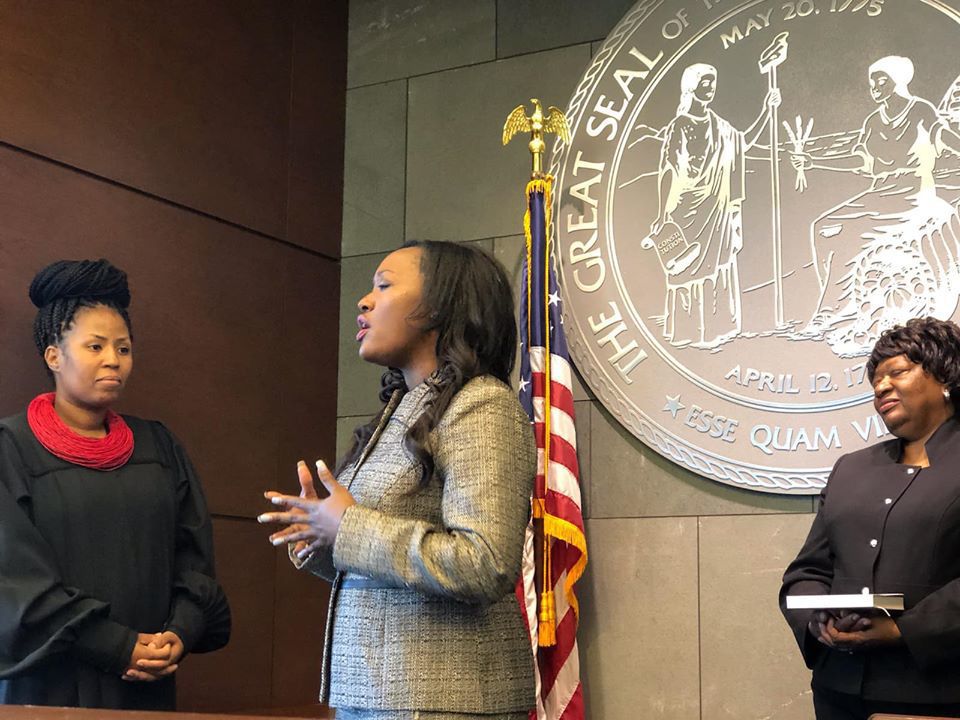 North Carolina’s newest state senator grew up in Greensboro and attended Dudley High School. Sen. Natalie Murdock fills a seat previously held by the first African-American women to hold a senate seat. Her mother, Christine Murdock, holds a Bible in the background. Her father, Harold Murdock, is battling cancer and could not attend the swearing-in ceremony. 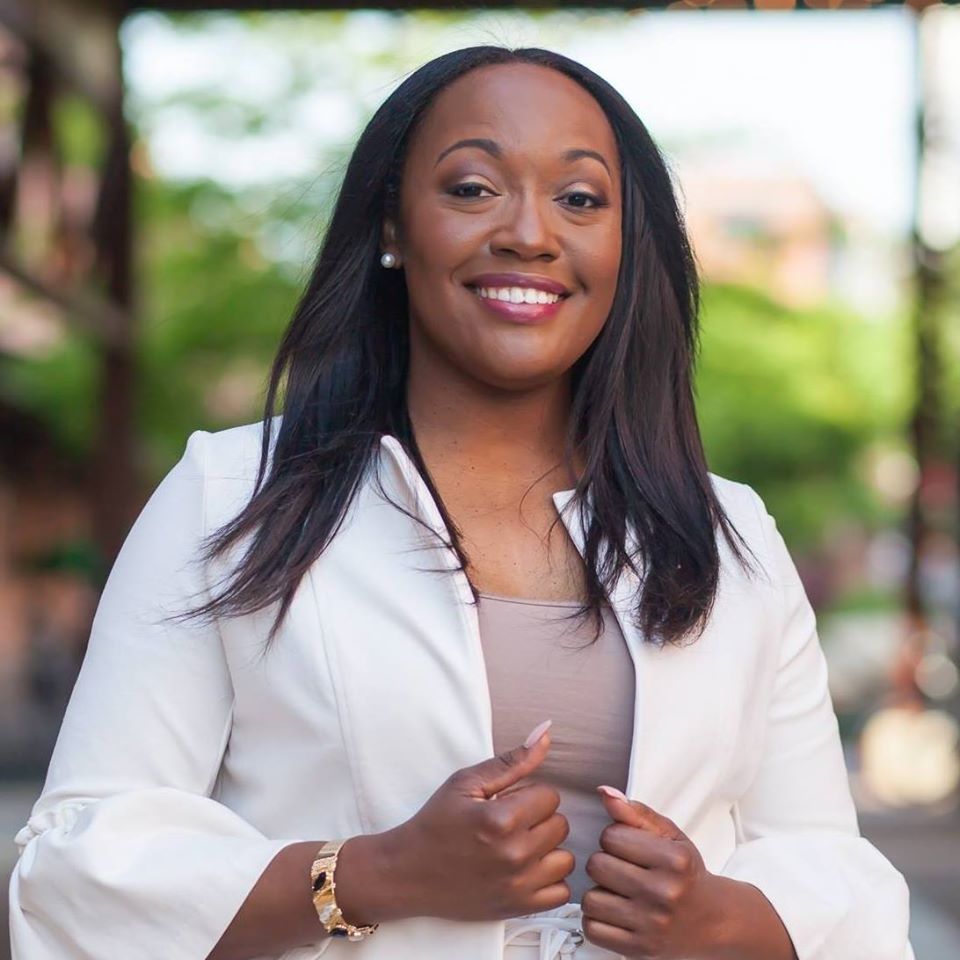 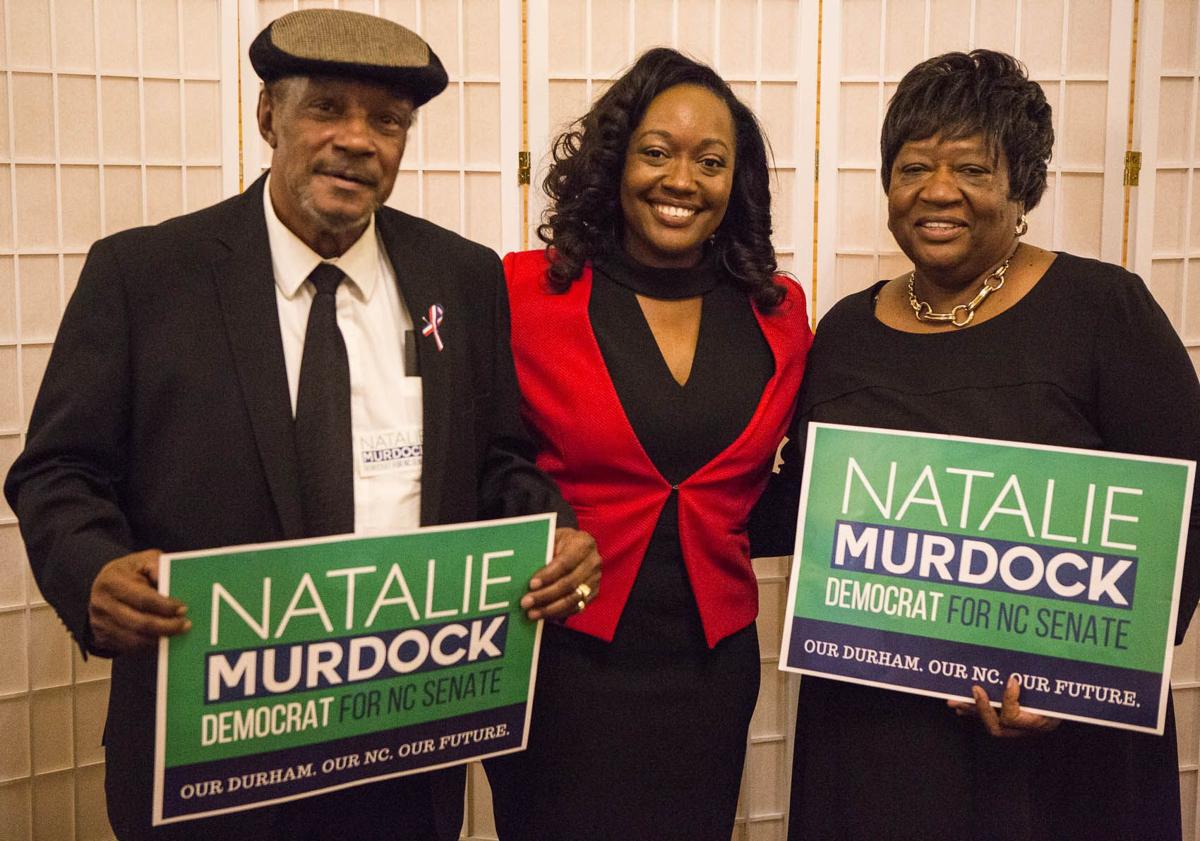 GREENSBORO — The youngest African American woman to serve in the N.C. General Assembly can trace her lineage back to the city's civil rights movement.

Natalie Murdock was appointed by Gov. Roy Cooper earlier this week to fill the 20th Senate District seat vacated by Mickey Michaux. Murdock, who lives in Durham, had already won the Democratic primary for the seat previously held by a number of political icons in the African American community.

Because of the coronavirus crisis, Murdock took the oath of office Thursday inside the largely vacant chambers of the General Assembly. Only her mother and a friend, Fayetteville City Councilwoman Shakeyla Ingram, were there to record the moment for those in her large extended family back in Guilford and Alamance counties.

"It was surreal and humbling," said Murdock, 36. "I am serving behind political giants."

As a child, the Girl Scout and debate team champion often attended NAACP meetings with her father, Harold Murdock, a veteran and social worker who notably worked on fair wage and criminal-justice matters. They often discussed issues on the ride home.

Her lineage includes aunts who were arrested at Greensboro demonstrations when they were students in the 1960s.

In campaign speeches, Murdock used the example of her paternal grandmother, Dorothy Murdock, who fought for fair wages and benefits as a cafeteria worker for Greensboro City Schools.

Her mother, Christine Murdock, still has the poster from her daughter's run for class president in the fifth grade and once pulled it out during a campaign event.

"You know how we moms are," Christine Murdock said with a laugh.

As she took pictures of her daughter entering the doors leading to the floor of the General Assembly, the retired nurse admitted she had to pause.

"That’s when it really hit that my daughter is a part of this," said Christine Murdock, who once oversaw safety for Guilford County's day cares.

Murdock follows a trail of iconic civil-rights activists who previously held the seat, including the late Jeanne Lucas, the first African American woman to serve in the state Senate.

"I'm excited about carrying on that torch," Murdock said.

Michaux, who served in the state House for over 45 years through 2018, had filled the 20th Senate District seat since January. It was previously held by state Sen. Floyd McKissick until he resigned to join the N.C. Utilities Commission.

When appointed, Michaux said he anticipated stepping down so Cooper could appoint the March 3 Democratic primary winner to succeed him.

That turned out to be Murdock.

Harold Murdock, a former NAACP Man of the Year, was unable to attend Thursday's ceremony because he is battling cancer. A tear ran down his face when his wife got back with pictures.

"I never really remember a time when my parents were not fully involved and active in the community," Murdock said.

That's what led her to politics.

Murdock remembers taking part in a high school project where students from across North Carolina spent a week in the General Assembly, crafting, passing and debating bills before voting to see which ones became laws. She participated three years.

Watch Now: America is running out of lifeguards

Children and delta: What parents need to know

Children and delta: What parents need to know

The Rev. Dolly Jacobs, who came to Greensboro from her native New Orleans, died Thursday. She had spent the past year supporting members who have struggled through the pandemic.

Jonathan Lotz, the grandson of Rev. Billy Graham, is moved from intensive-care unit as he continues getting treatment for COVID-19

Jonathan Lotz, a COVID-19 patient and grandson of the late Rev. Billy Graham, was moved out of a hospital's intensive-care unit Wednesday night, his mother said on her Facebook page.

Despite the encouraging news, some City Council members couldn't hide their displeasure that those crimes continue in some of the city's poorest neighborhoods.

North Carolina’s newest state senator grew up in Greensboro and attended Dudley High School. Sen. Natalie Murdock fills a seat previously held by the first African-American women to hold a senate seat. Her mother, Christine Murdock, holds a Bible in the background. Her father, Harold Murdock, is battling cancer and could not attend the swearing-in ceremony.