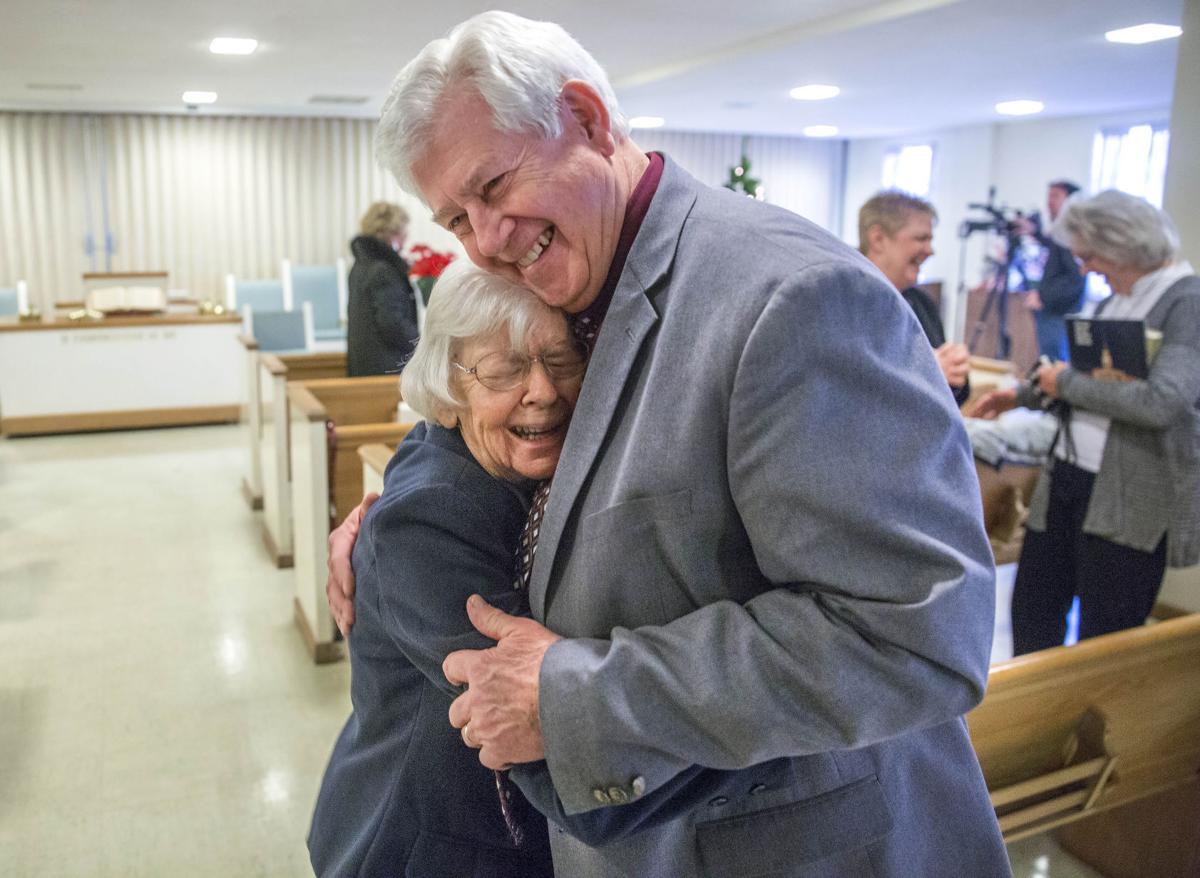 Merlene Tudor hugs David Miller following the final service Sunday at Florida Street Baptist Church in Greensboro. The 101-year-old congregation — once one of the city’s largest — has turned the building over to the nonprofit Hope Academy charter school and ministry. 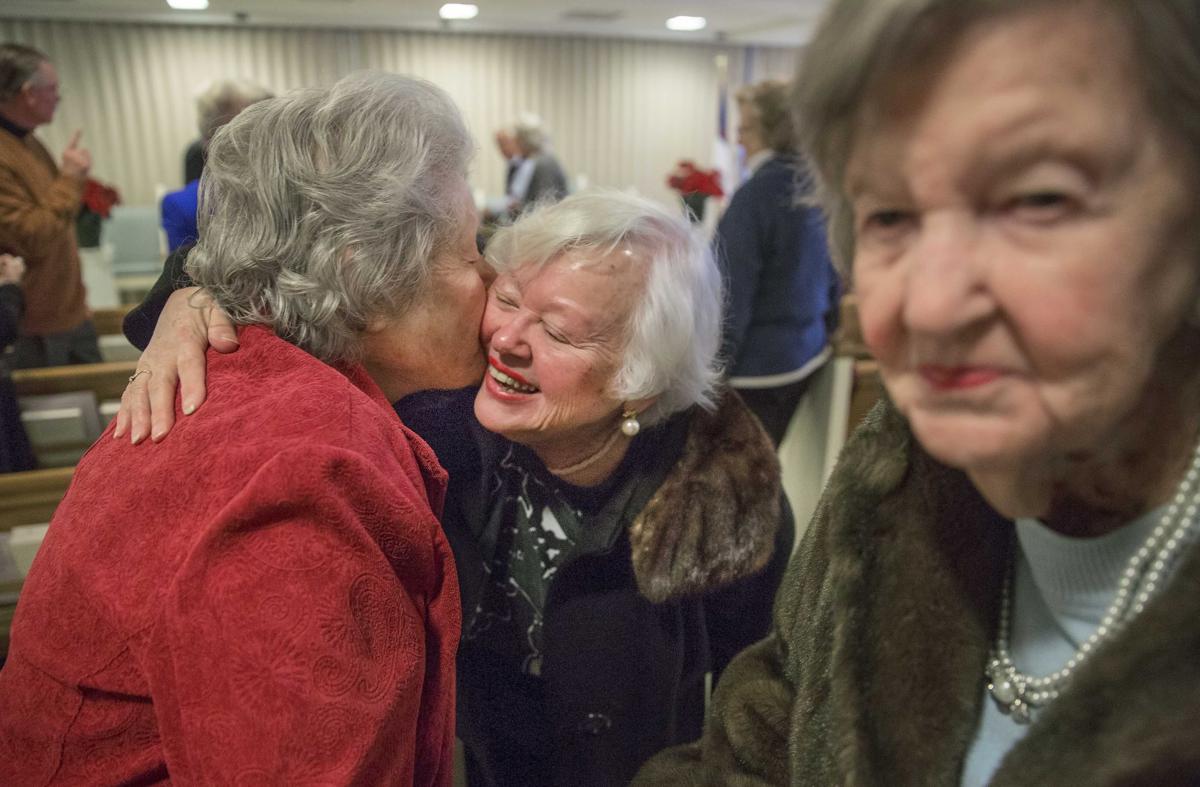 Lucy Parrish walks past as Mabel Lloyd kisses Louisa Weaver following the service Sunday at Florida Street Baptist Church. “All four of my children were baptized here,” said Parrish, 93, the church’s oldest active member. “For 65 years, this has been my home.” 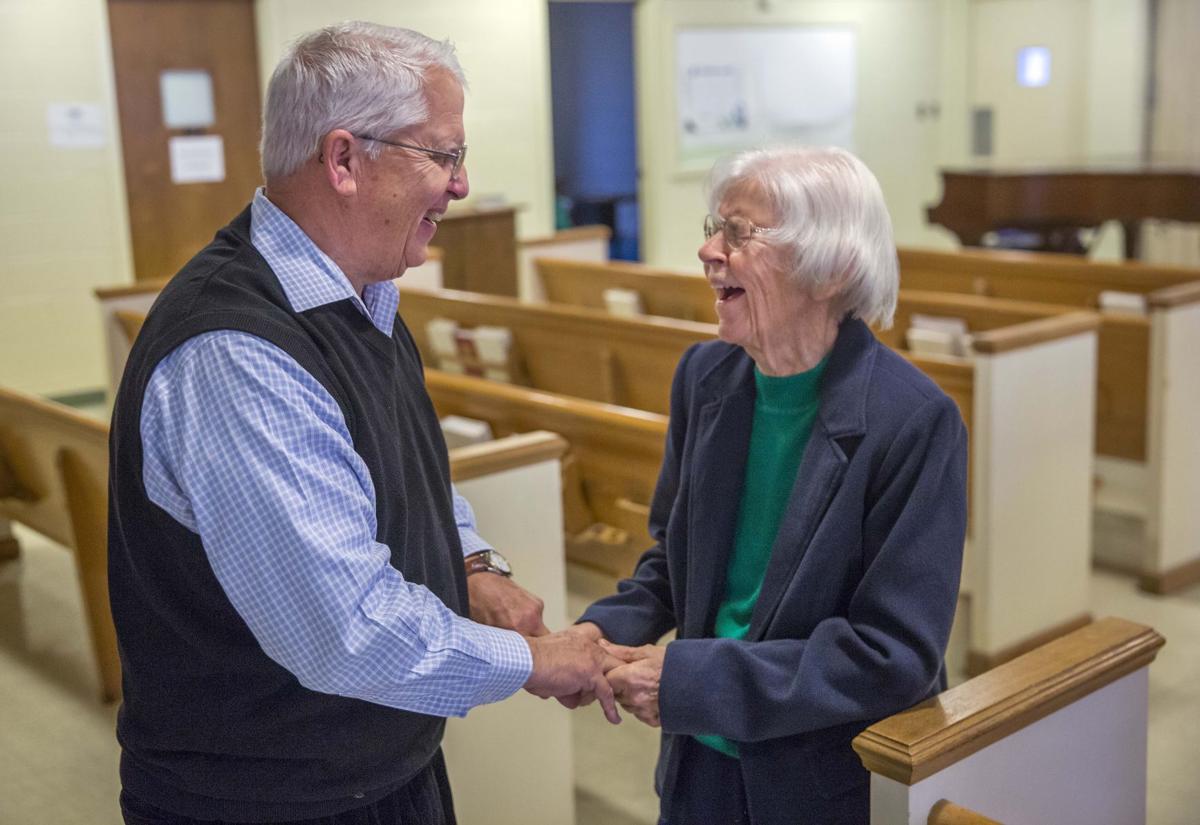 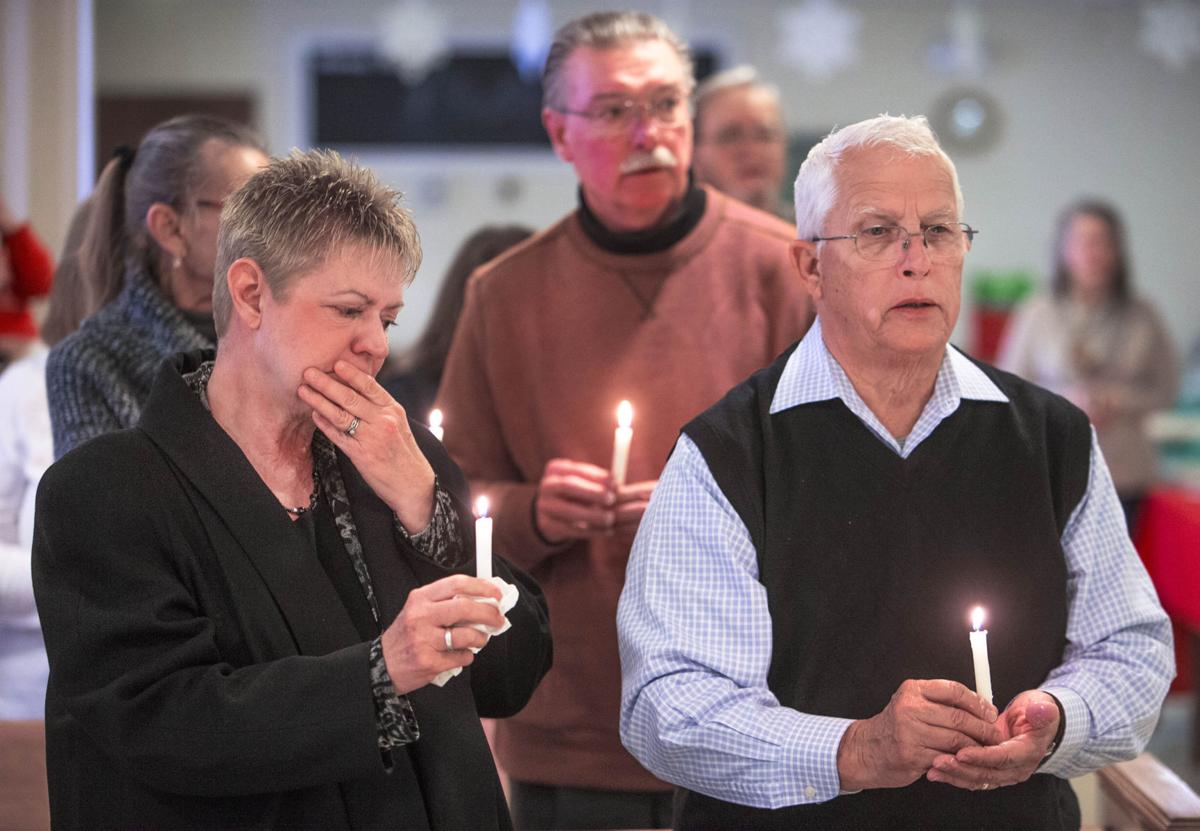 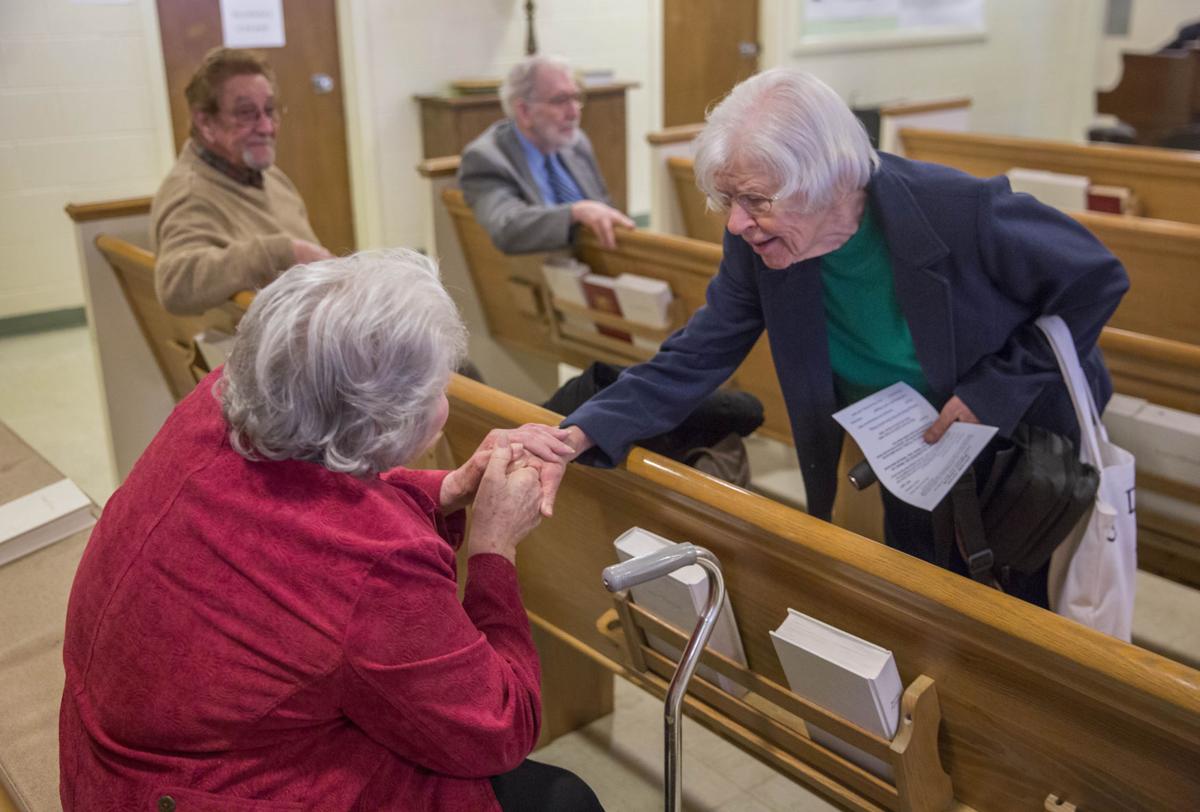 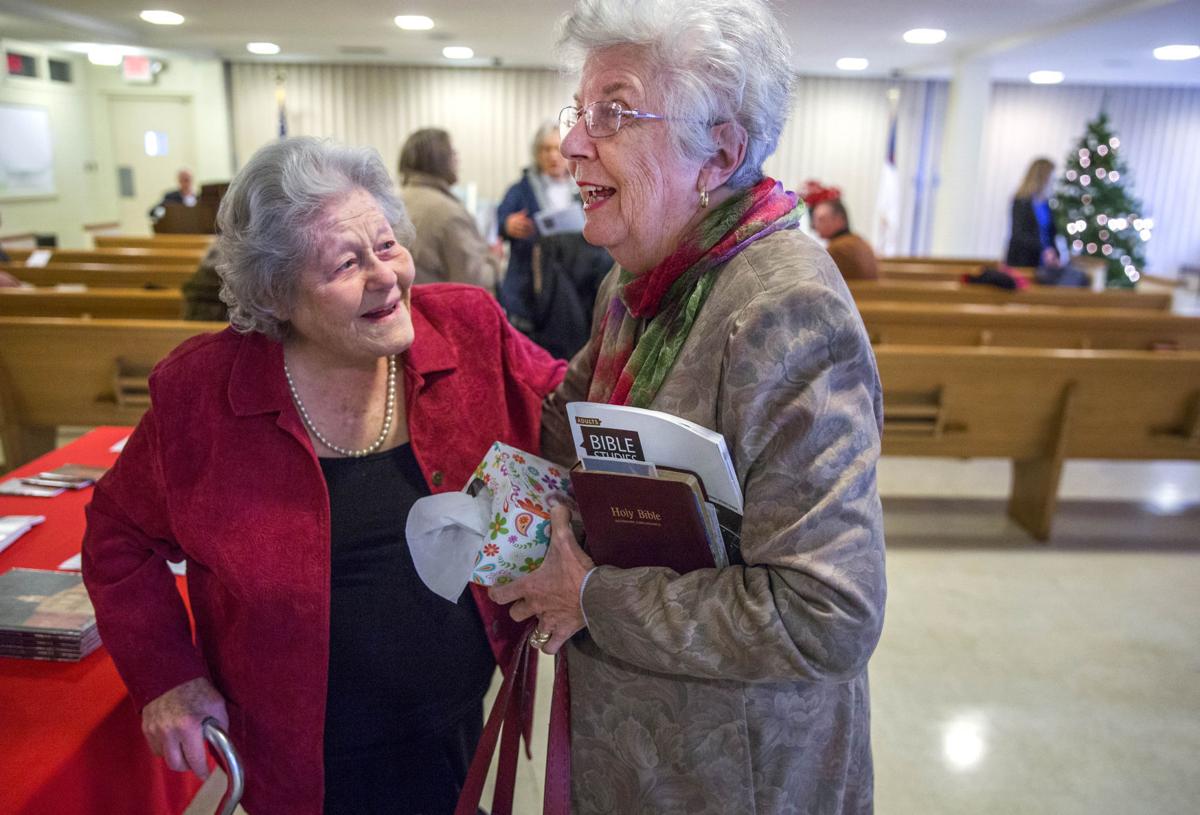 Mabel Lloyd (l) chats with Jean Faircloth before the final service after 101 years at Florida Street Baptist Church in Greensboro, NC on Dec. 31, 2017. 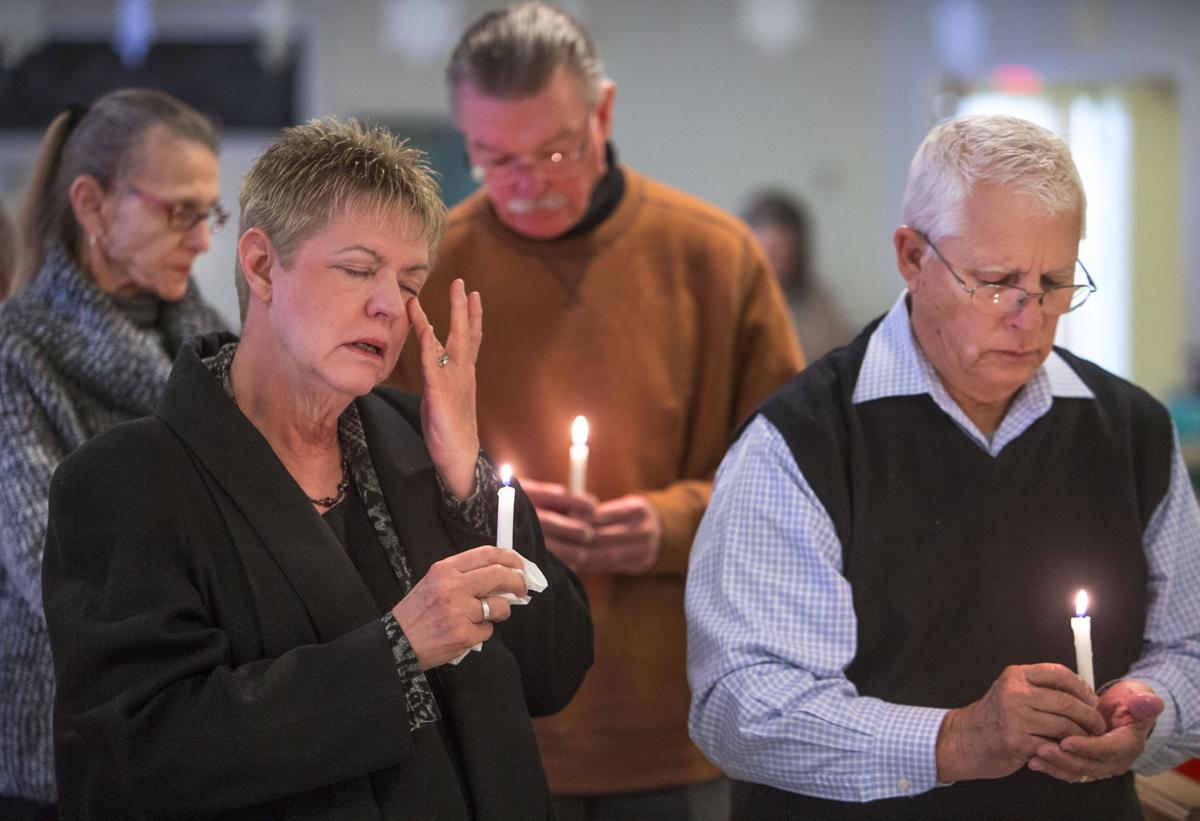 Gail Ledbetter wipes a tear as worshippers hold candles to sing a final hymn during the final service after 101 years at Florida Street Baptist Church in Greensboro, NC on Dec. 31, 2017.

GREENSBORO — Before the Sunday school lesson, the Rev. Kevin Kilbreth added another paper to a stack of them nearby — this one from a church in South Carolina in need of a piano.

“You want it to have a nice home,” Kilbreth said. “We also want to bless other ministries.”

The congregation won’t need it anymore.

This was the last Sunday for Florida Street Baptist Church.

The 101-year-old congregation — once one of the city’s largest with more than 1,000 in the Sunday school — has turned the building over to the nonprofit Hope Academy charter school and ministry, which focuses on the surrounding Glenwood community.

Sunday was a day of tears, tissues and touching words.

“All four of my children were baptized here,” said 93-year-old retired teacher Lucy Parrish, the church’s oldest active member. “For 65 years, this has been my home.”

The Southern Baptist church was once well known beyond the state, growing steadily and helping to start other churches in the 1950s. The original sanctuary expanded to seat 600 people then, when the surrounding Glenwood neighborhood, like the church, was filled with white families.

In 1957, twins Ruth Thomas and Janice Holder had a pink-and-blue themed double wedding, which filled the pews.

Holder, 79, is literally a lifelong member.

Over the years, members moved away or out into the suburbs and joined churches there, with no influx of new members to balance the losses. The Glenwood neighborhood diversified, but the new residents coming in didn’t show up on Sunday mornings. And as other churches in other denominations, attendance began dropping, leaving empty pews.

The church tried several strategies to stay rooted there. To help with the cost of upkeep, church officers at the sprawling 6-acre Glenwood neighborhood campus tried leasing the main sanctuary to another congregation and the education wing to the faith-based school. Florida Street members moved their hymnals to the fellowship hall, which provided more than enough space. They later brought in Kilbreth, then a retired pastor, who said he would take the job on an interim basis.

And then this summer, in a 14-4 vote, members decided to take the ultimate step and disband.

“My husband and I decided to play this through,” said longtime member Patricia Cegles of finding another church, “and decide next week.”

During “Legacy Sunday” the first week in December, more than 200 people showed up, many bringing stories and old pictures.

In the final women’s Sunday school class, the day’s lesson was about the Biblical story of Jairus, a spiritual leader whose daughter was dying. He had tried everything else, according to the passage, before asking Jesus to heal her.

Between discussions of faith and miracles, the women wove in memories of how those things had brought them together here. Merlene Tudor, now 86, had overseen the nursery and worked with young girls. She recently had moved away and had battled illness.

“You don’t know how it made me feel that I had all your support ...” Tudor said of the cards and prayers.

“... and will have,” someone piped up nearby before she continued.

In the classrooms and hallways before morning services, they joked about Bible trivia competitions and raised names like Bill Slack’s. The former deacon at one time had kept the church going when members couldn’t afford a full-time pastor. The church had long paid off the mortgage, but as the members dwindled, so did the offering.

He, however, made the connection with Glenwood Family Ministries’ Hope Academy, through which members today see their legacy continue in the community.

Then it was time for the last prayers, the last gathering.

In the pews sat Rachael Weaver, the last person to be baptized here years ago and the Rev. Steve Goode, who came here when he was 14 and his father was hired as the pastor.

“So that meant this building was my playground,” Goode, now the senior adult pastor at a Charlotte church, said during the service as members shared memories.

Kilbreth, in his message, reminded those who sat before him that while the congregation is disbanding, the work is not done. Kilbreth had strong ties to the church before taking on the title of interim pastor, having attended as a boy with his parents, and later receiving his call to ministry there.

“There are still families to be reached,” Kilbreth said. “Don’t stop letting Him do new things in your life.”

When the congregation voted to disband this summer, it also voted to make a $10,000 gift to Common Ground, a ministry that evolved from a Wednesday night Bible study and meal that targets upper elementary to recent high school graduates. The ministry, which draws 40 to 60 young people a week from the surrounding neighborhood, has since incorporated as the nonprofit Florida Street House. The congregation donated a building the church owned to the group to give them a permanent home.

Some of the church members will continue to meet as a Bible study and Sunday morning worship with Common Ground.

But this Sunday, they said goodbyes as a congregation.

Kilbreth and his wife, who agreed to come for six months but ended up staying three years, were given flowers and a gift and told they would never be forgotten.

As final act of worship as a church family, they took communion together — “The greatest symbol of fellowship in the faith,” Kilbreth said, then lit a candle for a final hymn.

“It was really beautiful,” Weaver said, “but I was thinking that this will be the last time that we will all be together in one place and what that means.”

Biden honors Powell as 'a dear friend and a patriot'

Merlene Tudor hugs David Miller following the final service Sunday at Florida Street Baptist Church in Greensboro. The 101-year-old congregation — once one of the city’s largest — has turned the building over to the nonprofit Hope Academy charter school and ministry.

Lucy Parrish walks past as Mabel Lloyd kisses Louisa Weaver following the service Sunday at Florida Street Baptist Church. “All four of my children were baptized here,” said Parrish, 93, the church’s oldest active member. “For 65 years, this has been my home.”

Mabel Lloyd (l) chats with Jean Faircloth before the final service after 101 years at Florida Street Baptist Church in Greensboro, NC on Dec. 31, 2017.

Gail Ledbetter wipes a tear as worshippers hold candles to sing a final hymn during the final service after 101 years at Florida Street Baptist Church in Greensboro, NC on Dec. 31, 2017.