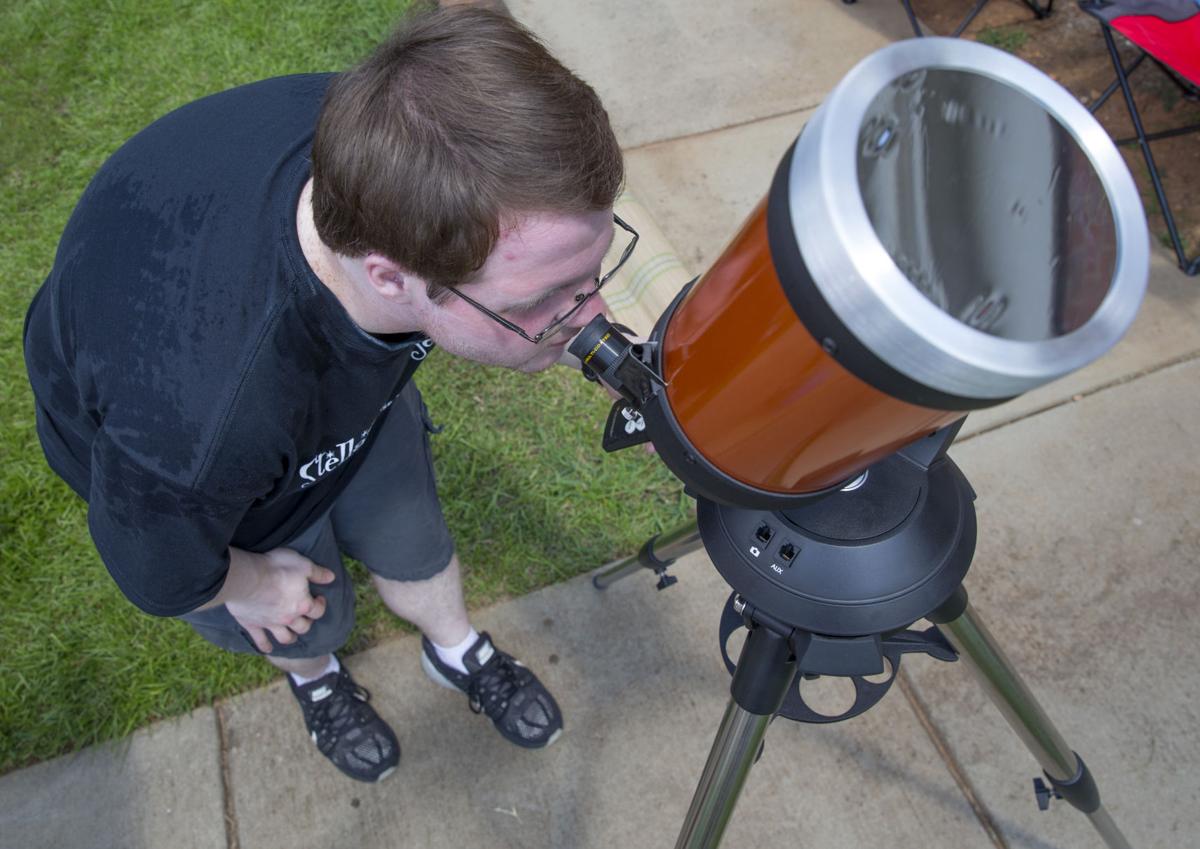 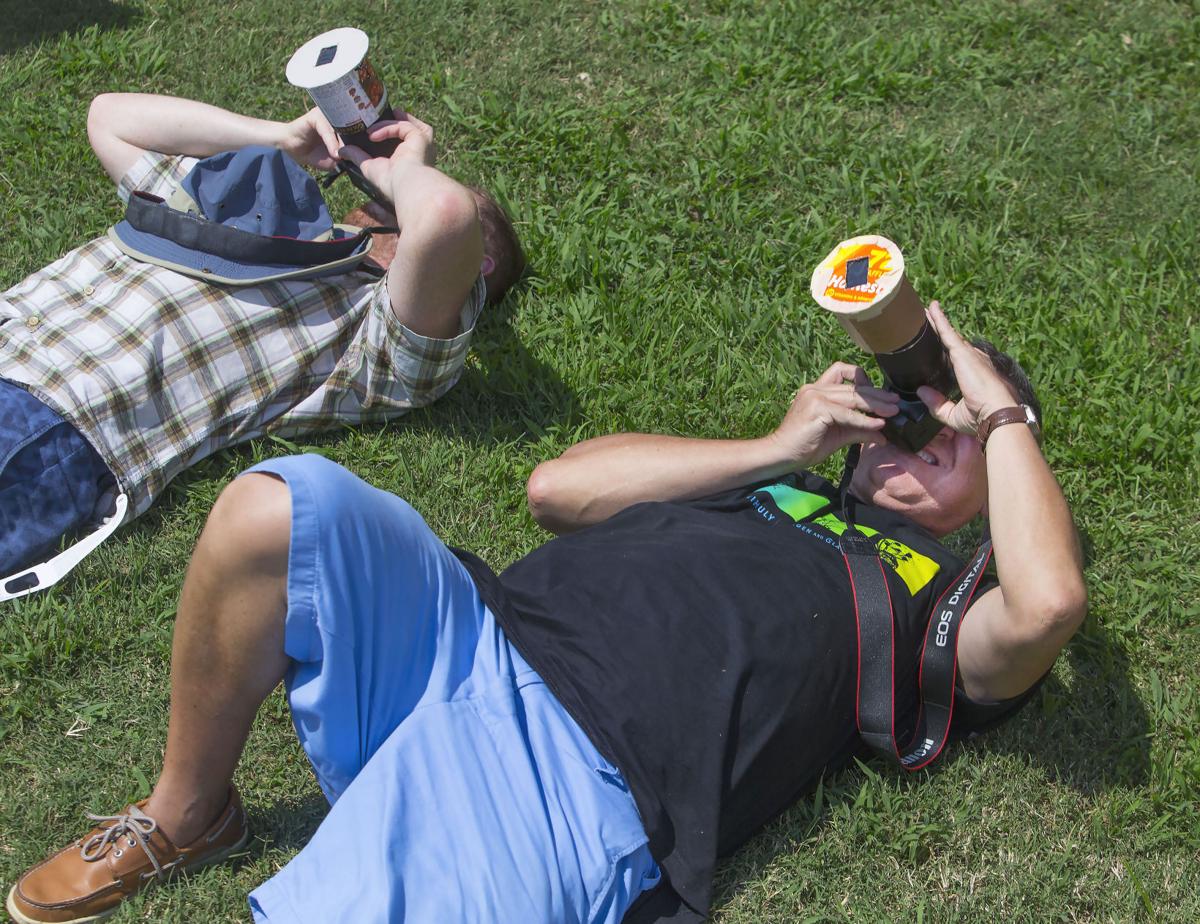 Carl Jonas Bjoerk and Mark Young lay on the ground to capture photos of the total solar eclipse in Newberry, SC on August 21, 2017. 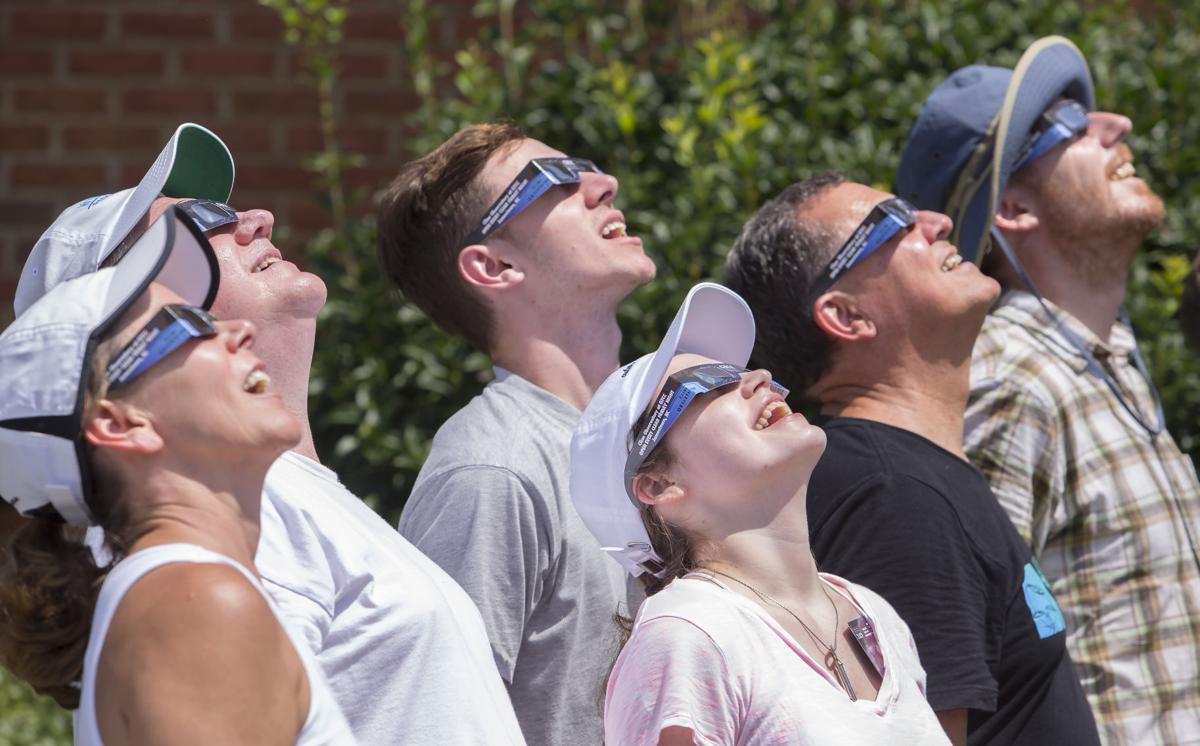 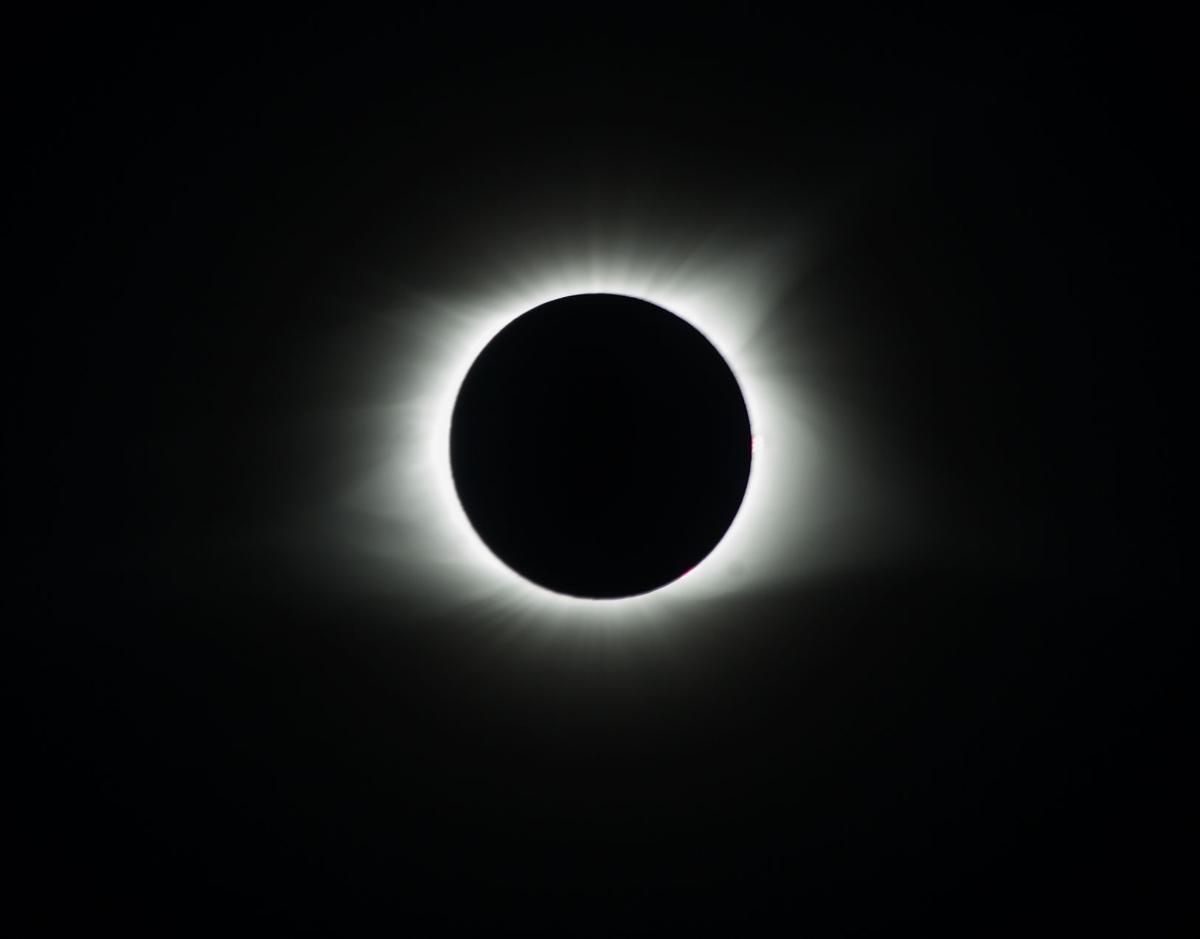 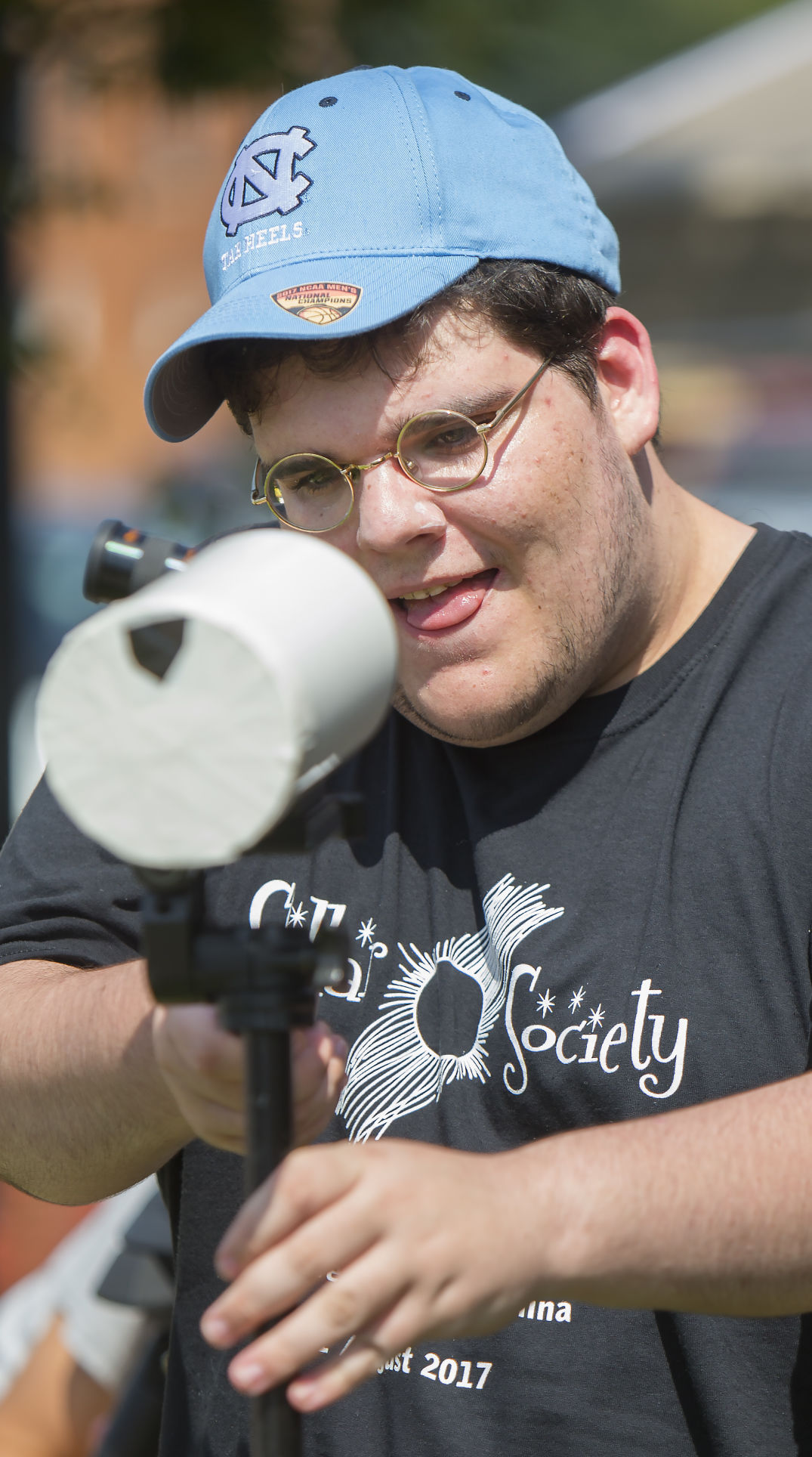 NEWBERRY, S.C. — Before the crowd could absorb the shock of the total eclipse, it was over.

For a little more than two-and-a-half minutes the moon covered the sun here, leaving only shimmering shadows and a ragged yellow corona to light the night sky.

Cicadas sang their loud dusk song as lights at the gas station across the street flicked on to illuminate the otherwise dark parking lot.

“It was the fastest two minutes of my life,” said Annie Chrismon, who traveled to Newberry with the Stellar Society astronomy club from Guilford Technical Community College to see this rare total solar eclipse, which cut a 70-mile path from Portland, Ore., to Charleston, S.C., with a partial eclipse in a far wider band that included Greensboro.

The astronomy club left Jamestown around 5 a.m. to be here by midmorning. Two dozen students, faculty and friends made the trip in a school van and cars to carry six solar telescopes and other devices for viewing the eclipse

“I feel like I’ve been awake for 24 hours,” said Chrismon to Zack Young, an astronomy student from Sedgefield.

Young and Chrismon said waiting the 90 minutes for the partial eclipse to become total seemed like an eternity. But when the sun went dark and the lights came on, the students and their friends and professors jumped into frenzied activity.

They removed special solar filters from their telescopes and started observing the planets and stars that began to shine brightly around the black disc that was the moon covering the sun. At that point the telescopes became once-in-a-lifetime teaching tools as the air cooled down and the skies began to sparkle.

Tom English, director of GTCC’s Cline Observatory and astronomy program, said according to the National Weather Service in Columbia, the temperature was 95 degrees at 1:10 p.m as the eclipse began, then fell to 84 degrees during and after totality by 2:48. It didn’t begin heating up again until 3 p.m.

He said a group of martins flew wildly after the light came back, unsure whether the day had ended or begun.

After listening for months to his professors describe a total eclipse, he said, “I’ve seen it, so now I can tell people about it. I would spend thousands of dollars just to see this again.”

For English, this trip was a piece of living history for his profession.

Newberry experienced a total eclipse in 1900, and an expedition from the U.S. Weather Bureau in Washington brought scientists and meteorologists to observe what happens during an eclipse.

English chose to bring his group here because the city had been a pivotal place for earlier observation when trains, telegraphs and infrastructure made it one of the best places to conduct solar research during the era when eclipses were the best — but fleeting — times to learn about the nature of the sun.

Aaron Titus, the chair of High Point University’s department of physics, and also a friend of English’s, brought two bus loads of students and faculty to town as well.

Titus said his group chose the location out of three based on last-minute weather forecasts.

For a few minutes, it appeared the clouds wouldn’t cooperate. But they blew away by showtime, after 2 p.m., and the GTCC students broke into a chorus of The Beatles’ “Here Comes the Sun” before the moon drove it away.

At 2:40 the dim light went dark and a huge roar erupted from the hundreds of people who had been dancing to beach music on Main Street during Eclipsefest 2017 in Newberry.

Strange shadow bands rippled across the concrete as the students manned their telescopes for the kind of rare research that brought those scientists to this town in 1900.

Brian Morris, 25, now a student at N.C. State and a host at the GTCC observatory, said he got what he had hoped for and much more in his first total eclipse.

“I thought the eclipse was so breathtakingly beautiful, seeing the planets that you wouldn’t normally be able to see until the night sky, just around the sun, was amazing,” Morris said. “Seeing the lights go on and then turn back off at the end and seeing that diamond ring when the moon finally moves a little slightly over and you could see that peek of sunlight coming out … it was great. Fantastic.”

Clouds and rain dampened the city's excitement over the first total eclipse to cross most of the United States in nearly a century.

Carl Jonas Bjoerk and Mark Young lay on the ground to capture photos of the total solar eclipse in Newberry, SC on August 21, 2017.