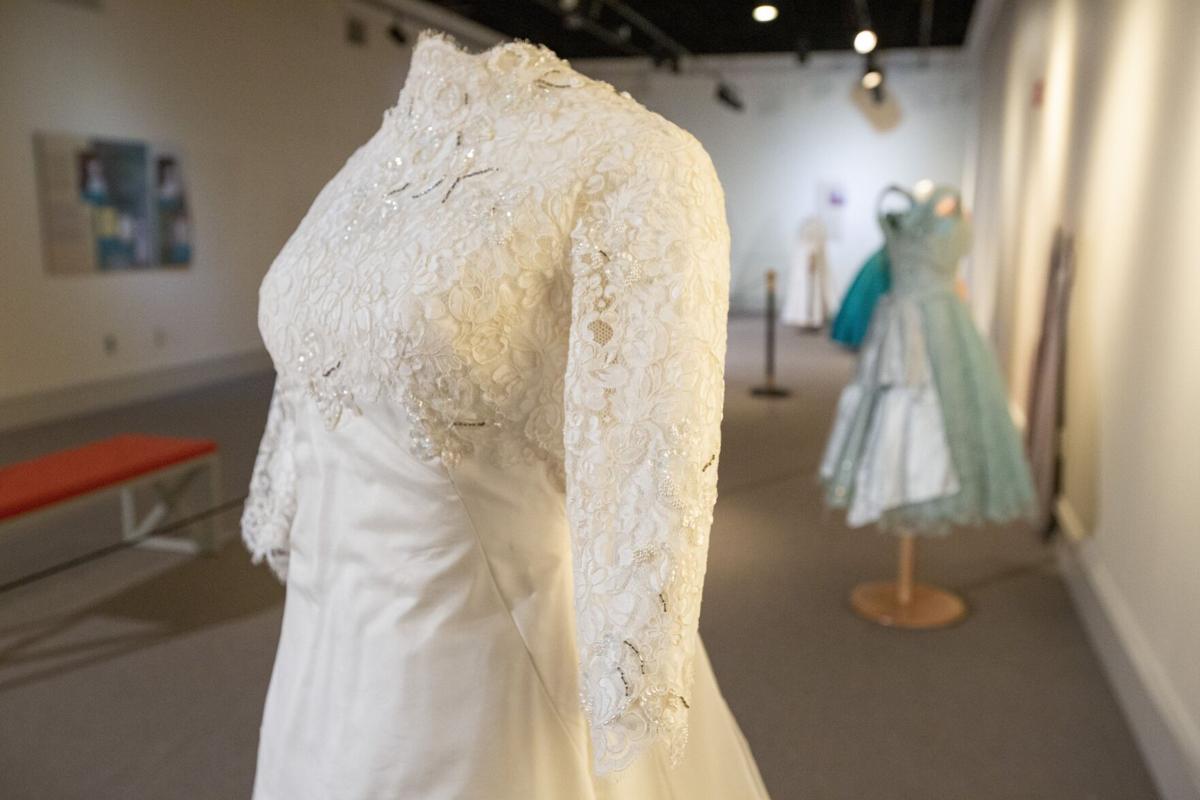 One of the dresses in the "Made Especially For You By Willie Kay" exhibit at N.C. A&T University Gallery in Greensboro. 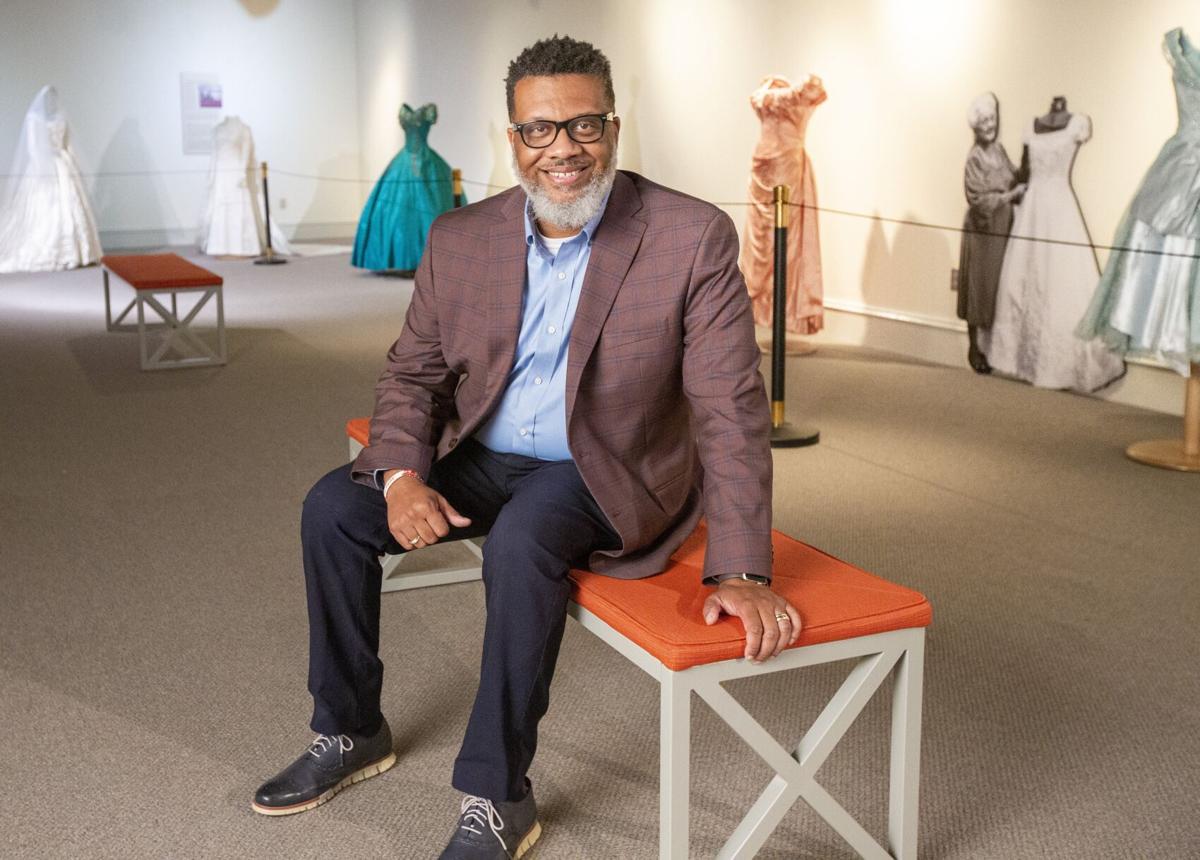 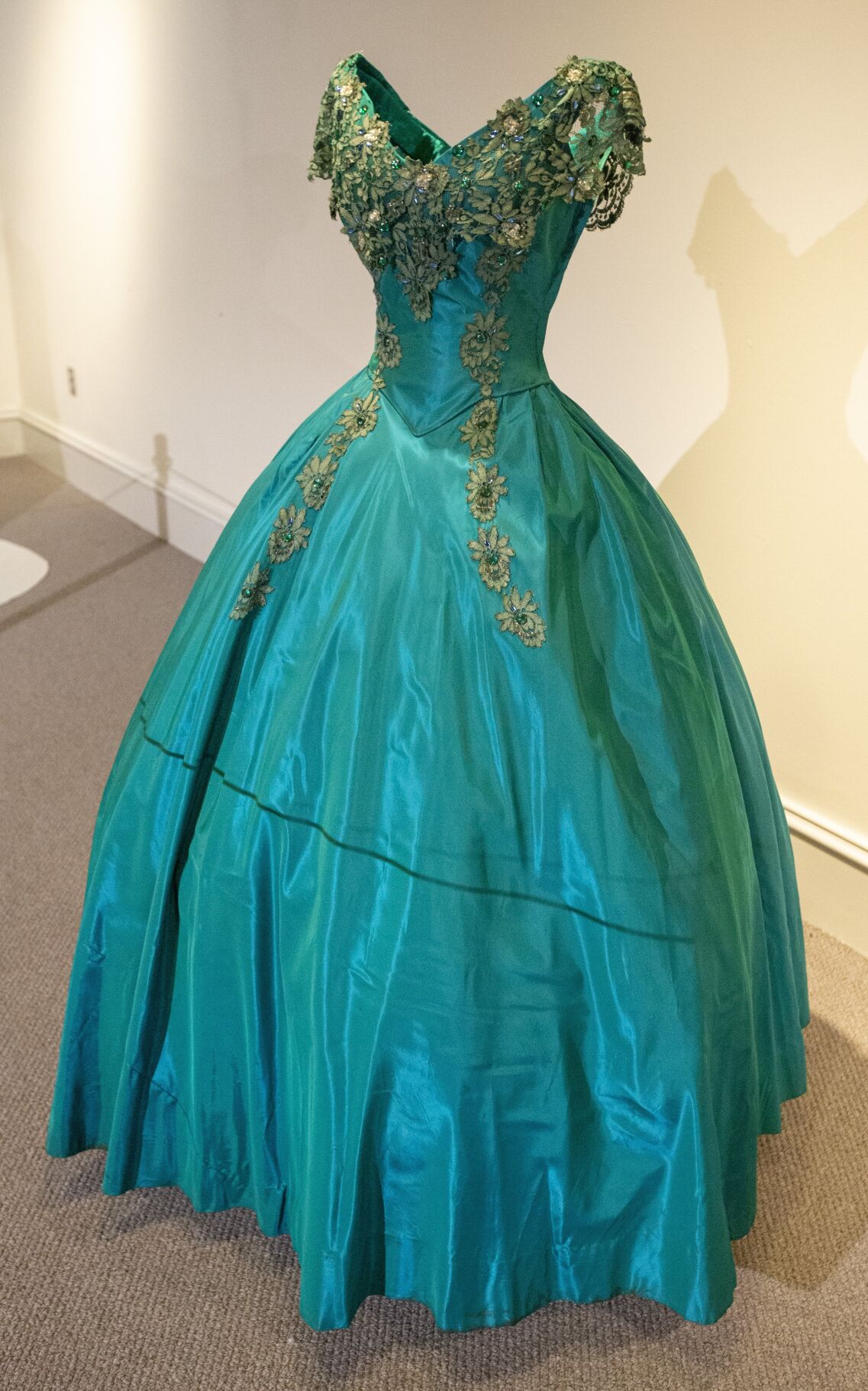 One of the dresses in the "Made Especially For You By Willie Kay" exhibit at the North Carolina A&T University Gallery. The exhibit features dresses made by Willie Kay, a 1930s-era Black seamstress, who has great-grandchildren in the area and ties to A&T. 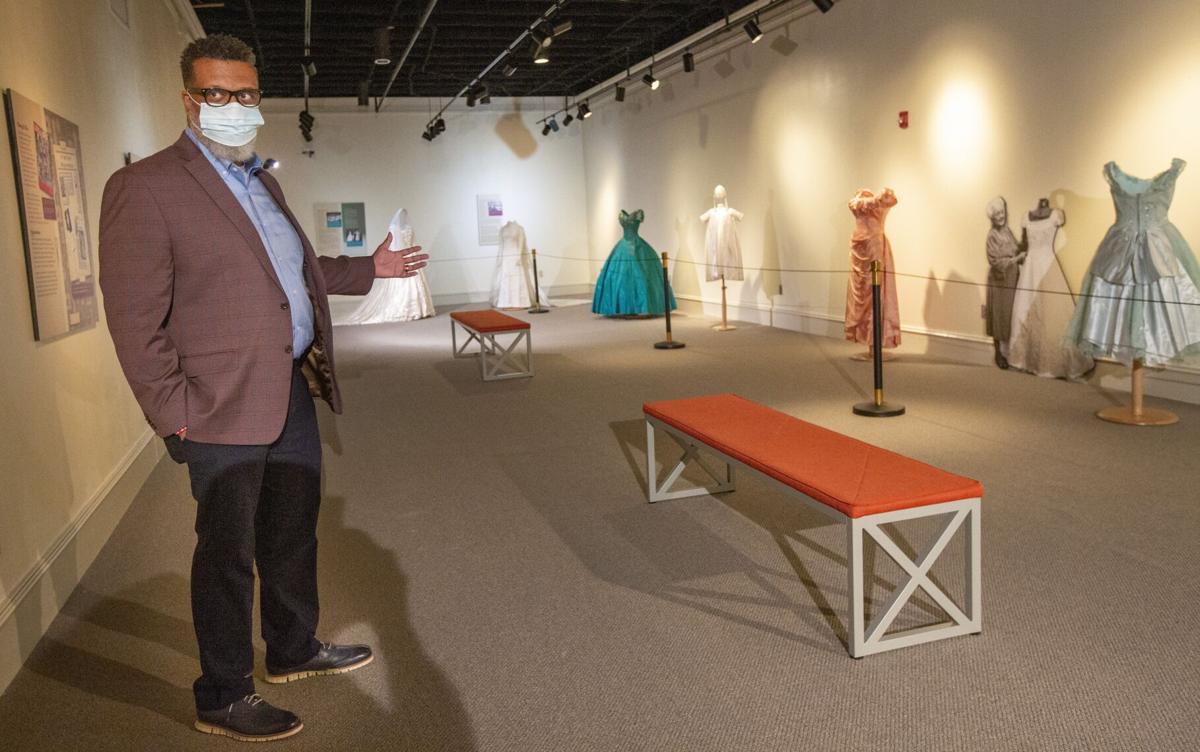 Director of the University Galleries Paul Baker talks about the "Made Especially For You By Willie Kay" exhibit. "She was an artist," Baker said. "Cloth was her medium." 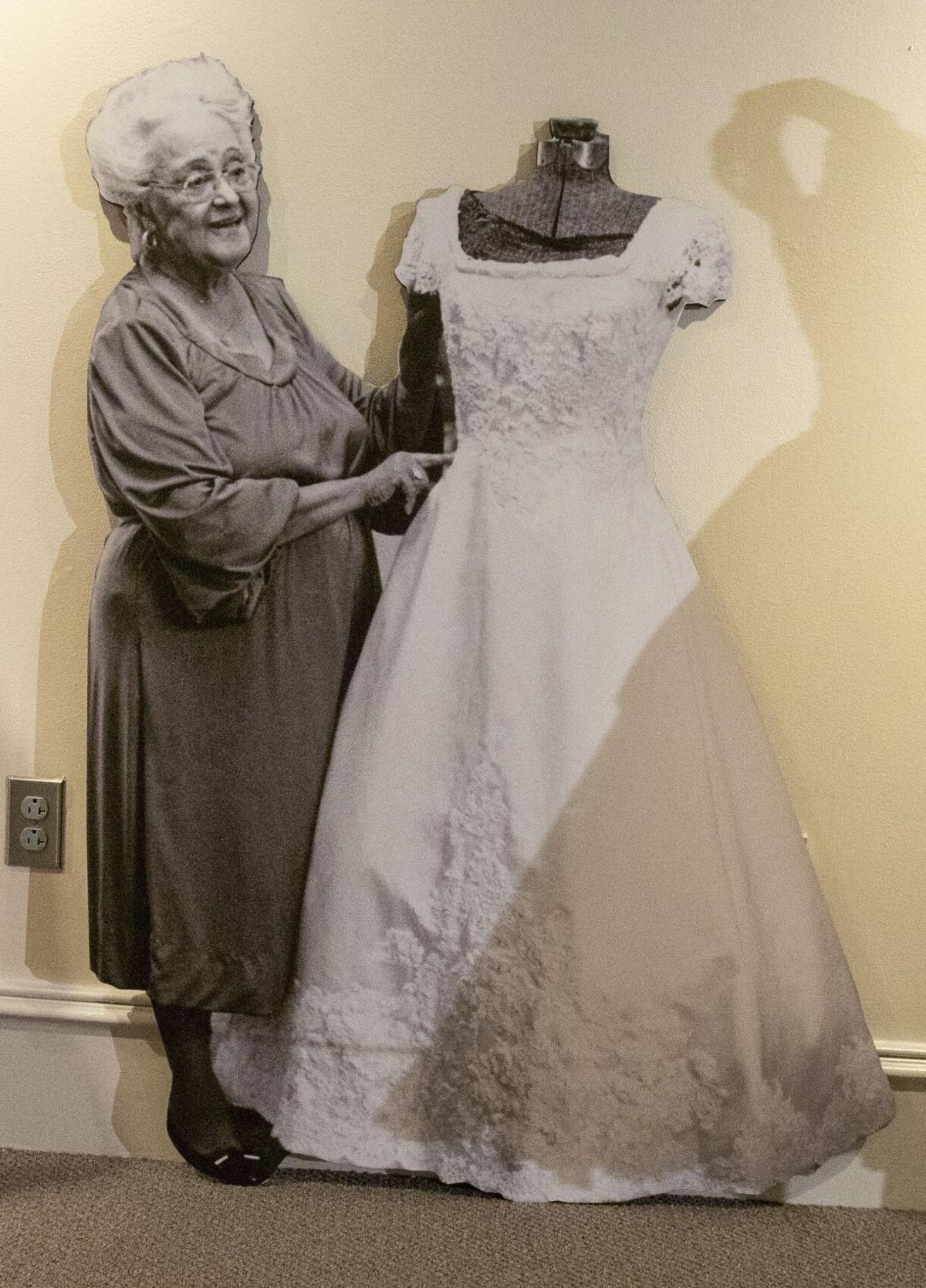 A cutout of Willie Kay in the "Made Especially For You By Willie Kay" exhibit in Greensboro. 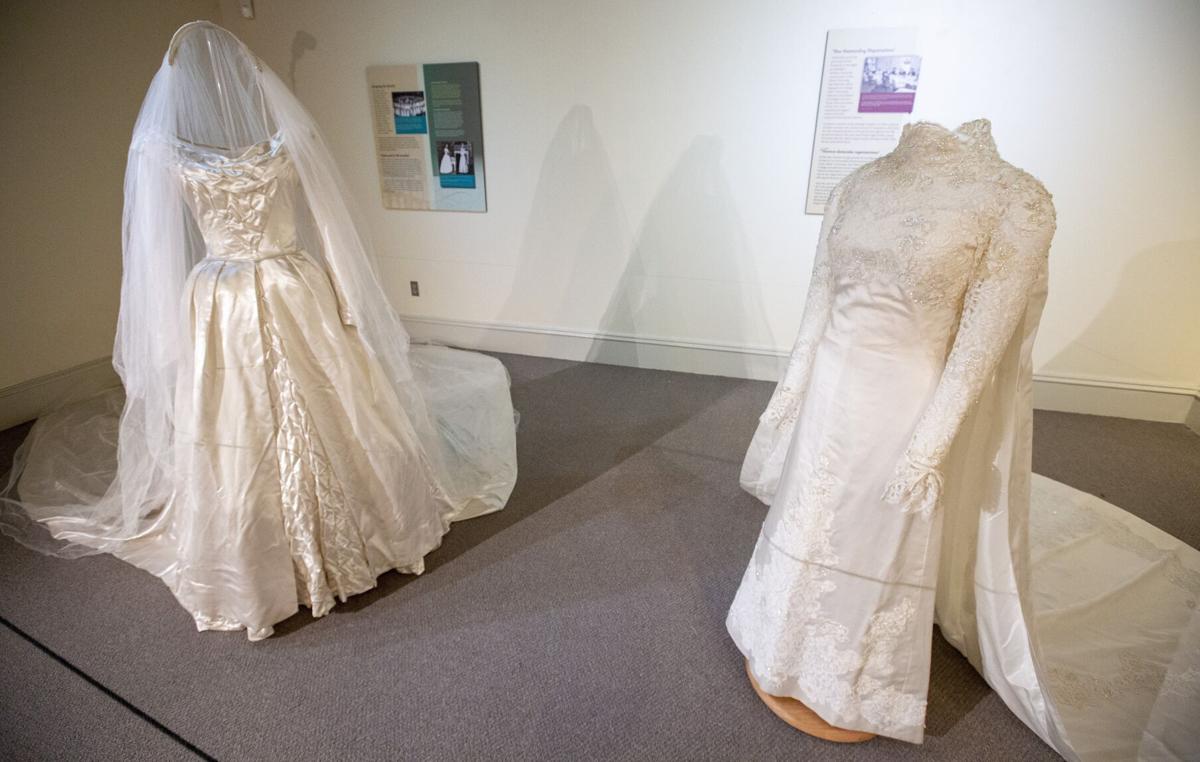 Some of the dresses featured in the "Made Especially For You By Willie Kay" exhibit.

GREENSBORO — Paul Baker’s favorite piece in the new exhibit on fashion designer Willie Otey Kay is the christening gown she made for her grandson, former State Auditor Ralph Campbell, the first Black person elected to statewide office in North Carolina.

“If I have to take a poll of those who have already seen the exhibit,” said Baker, director of the University Galleries at N.C. A&T and a history professor, “it would be the emerald green gown.”

The “Made Especially for You by Willie Kay” traveling exhibit tells the story of a Black dressmaker by trade during and beyond segregation, whose work was featured on the cover of Life magazine — the bible of American life — as well as McCall’s.

“She was an artist,” Baker said. “Cloth was her medium.”

To secure an appointment with Kay was quite a feat, as her bookings for weddings and the Southern tradition of debutante balls and cotillions sometimes had to be made years in advance and spread beyond her Raleigh community.

Borrowed from the N.C. Museum of History, some of Kay’s designs went on display at A&T earlier this month. The exhibit is free and open to the public.

“I was nervous to get close to it,” admitted Loil Covington, a museum studies student who helped to create the exhibit around the collection. “In 1950, she was selling dresses for $500, which was the price of a car back then.”

Widowed and an educated Black woman in the 1930s, Kay used her skills to send her five children to college, including son John Walcott Kay to A&T. Because of her talents, the businesswoman and entrepreneur was able to navigate racial restrictions in ways others at the time could not, with the wives and daughters of governors and other prominent people visiting her home studio.

“I watched these creations out of bolts of fabric,” said grandson and former Atlanta Mayor William “Bill” Campbell.

As a boy, he sat with Kay at her sewing machine after school and on Saturdays, when women and girls came to their first appointments and later for fittings.

His grandmother, who he and others describe as serene, regal, eloquent and thoughtful, never used patterns — just measurements, sketches submitted by a few and agreed-upon ideas.

“To have a creation by Willie Kay meant something,” Campbell said.

Willie Otey Kay, who shared the same name as an aunt, is connected to large swaths of the story of North Carolina.

A portion of the Otey family’s history also mirrored that of other Black people in the South who were slaves. Only they were owned by the Iredell family and brought to Raleigh when James Iredell Jr. became governor, said Earl Ijames, a curator at the state history museum.

After slavery, Willie Kay’s father was a prominent barber in Raleigh’s grandest hotel with an all-white clientele, including those who were politically connected. Daughter Willie and the other Otey siblings lived just a few blocks from Hargett Street and its African-American doctors, businesses and thriving segregated community.

Kay’s maternal grandmother was an accomplished seamstress. She and Kay’s mother taught the six Otey girls to sew.

“It always surprised my mother,” Kay once said, “when she would make things for my sisters and me, I could copy them for my dolls.”

After graduating from Shaw University in Raleigh with a home economics degree in 1912 — and winning first prize in the school’s dressmaking competition that year — she married John Walcott Kay, one of the last graduate’s of the university’s Leonard Medical School, which was erected at the end of the Civil War.

The couple married in 1915 and moved to Wilmington to help open a hospital in the aftermath of the massacre of 1898.

John Kay died at age 37, leaving Willie and her brood of five returning to Raleigh, where she opened a studio in her home to support the family.

Several of the Otey sisters were talented seamstresses and helped Kay at times.

Meanwhile, the legend of Kay spread by word of mouth and aided by her father, according to the N.C. Museum of History’s research.

“I understand barbers like to talk as they work ... and I think he told (his customers) ... that I was sewing here at home,” Kay once said during an interview used as part of the exhibit. “And then their wives and daughters began to come. And that’s really how it began.”

Among the wedding gowns on display in the exhibit is a satin piece with a 10-foot train designed for Carolyn Dorcas Maynor, who married Ray Bucher Jr. in 1948.

The young bride knew she wanted a grand dress for her wedding in Duke Chapel, so she drew her own design — which Willie Kay created, along with a matching veil, using Duchesse satin acetate and nylon tulle. Kay’s sister, Elizabeth Otey Constant, added glass and pearl seed beads.

The green gown that has drawn so much attention as part of the collection was made as a “second-night” gown in 1954 and embellished with sequins and rhinestones for debutante Louise Wooten.

Eric Ennis, a dressmaker who was interviewed as part of the exhibit’s oral archives, recalled moving to Raleigh in 1966 and hearing about Kay at almost every turn. The two became colleagues.

“She gained her reputation,” he said, “because of her quality of work.”

“There were multiple stories like that,” said Diana Bell-Kite, another curator at the state’s history museum, who worked extensively with the people who loaned dresses for the exhibit.

In 1952, she said, Kay made Carolyn Cheek Palmer’s wedding gown. Four years later, Palmer’s sister, Cathryn Cheek Zevenhuizen, wore it for her own nuptials. Zevenhuizen’s cousin later wore the gown, as did two daughters and a daughter-in-law.

“That said to me how valued her work was in families and how they were considered heirlooms almost from the start — and families planned to use them as such,” Bell-Kite said.

One of her favorite stories is of the socialite who had a wedding gown shipped from Paris for Kay to replicate.

One of the women interviewed for the exhibit, Synthia Teele, lived in Tallahassee, Fla. An aunt from Raleigh insisted she book an appointment for her 1969 nuptials with Kay. The bride went to Kay, and the 10 bridesmaids sent their measurements. When the bride came for her fitting, the pink, intricate bridesmaids dresses went back with her to Florida.

“If I were that bride, I would have lost my mind worrying that they would not fit,” Bell-Kite said with a laugh. “But Willie Kay was an expert. And they all fit.”

Campbell, the former mayor of Atlanta, said that when the curators began looking for women with Willie Kay gowns for the exhibition, they didn’t have too look but so far — his wife’s friends in Atlanta had some in their closets.

“They had no idea that my grandmother had created their wedding dresses,” Campbell said.

Glenn Hinson, a professor of folklore and anthropology at UNC-Chapel Hill, sees Kay as an example of the resolve to fight for civil rights.

With their clientele, both Kay and her father served some of the people who might have been bent on preserving the status quo, but her family used their money to strengthen and affirm the African-American community.

Her daughter June’s husband — Bill Campbell’s father — served as the president of the Raleigh chapter of the North Carolina NAACP during segregation. Young Bill Campbell and other members of their family were part of the demonstrations and protests over Jim Crow laws.

“I can’t help but believe, just from what I know about her, that she saw her gifts as a way to challenge presumptions — and in making that challenge — forcing white folks to understand their presumptions of blackness,” Hinson said.

One of Baker’s students marveled at the quality of the dresses, which have been called timeless and elegant.

“Some of the dresses are 80 years old,” said Cody Bailey, also in the museum studies class, “and they still look like they were made yesterday.”

This video could show a tornado on the sun

One of the dresses in the "Made Especially For You By Willie Kay" exhibit at N.C. A&T University Gallery in Greensboro.

One of the dresses in the "Made Especially For You By Willie Kay" exhibit at the North Carolina A&T University Gallery. The exhibit features dresses made by Willie Kay, a 1930s-era Black seamstress, who has great-grandchildren in the area and ties to A&T.

Director of the University Galleries Paul Baker talks about the "Made Especially For You By Willie Kay" exhibit. "She was an artist," Baker said. "Cloth was her medium."

A cutout of Willie Kay in the "Made Especially For You By Willie Kay" exhibit in Greensboro.

Some of the dresses featured in the "Made Especially For You By Willie Kay" exhibit.