GREENSBORO — For the first time, Cone Health is treating more than 100 people with COVID-19 in its hospitals, the health care system announced in a news release.

As of Tuesday morning, 103 patients were hospitalized, Cone said.

“These trends are very alarming,” Cone Health CEO Terry Akin said in the release. "Our extremely committed doctors and nurses, our facilities and resources, are becoming stretched."

Cone Health said it might be forced to reduce non-COVID-19 care and services if cases of the respiratory disease continue to rise.

The health care system has capacity to treat 116 people at its Green Valley campus — the former Women's Hospital — which was converted into a coronavirus-only facility. Its other hospitals have capacity to treat additional people with COVID-19.

However, projections show that capacity could also be stretched in the coming months, according to the release.

The announcement came on the same day that Gov. Roy Cooper unveiled a new COVID-19 alert system that ranks counties in tiers based on three metrics: the rate of cases within a county's population, the percentage of positive cases and the impact COVID-19 is having on local hospitals.

Guilford County is in the lowest tier and has "significant" spread, according to metrics taken Nov. 1-14. The other two tiers are "substantial" and "critical" spread.

"Today, we have the highest rate of hospitalizations since the pandemic began," Cooper said at a news conference on Tuesday, referring to statewide figures that also reflect Cone's status.

Accompanying the state's alert system are recommendations that local governments, businesses and individuals should take based on the tiers, Cooper said.

Mandy Cohen, North Carolina's secretary of health, said that hospitals are feeling the strain, "particularly in the Triad area." 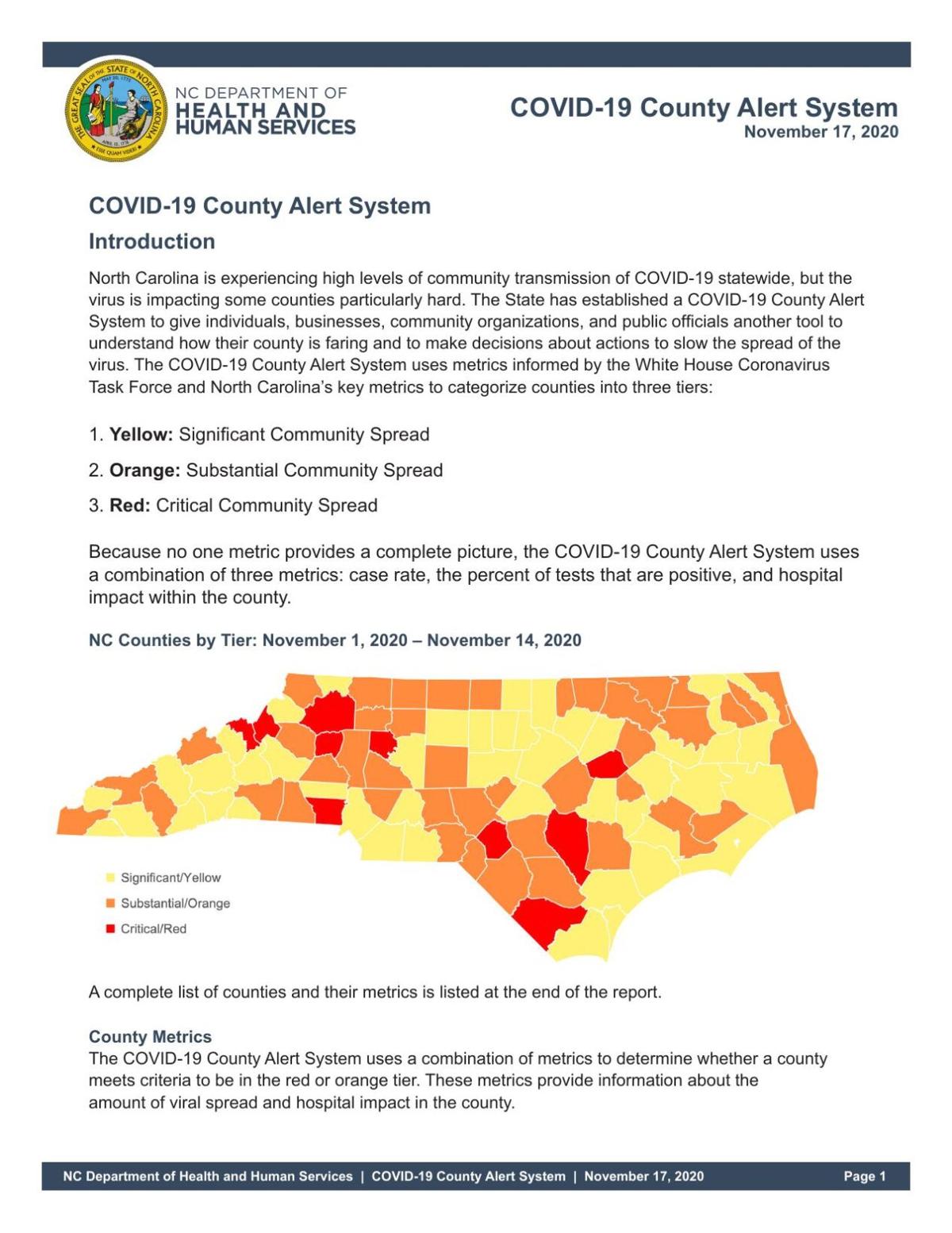 While Cooper strongly suggested counties with high levels of transmission should more aggressively enforce statewide health guidelines and punish noncompliant businesses, he also raised the possibility of the state placing greater restrictions on them.

Leaders in over half of the state's counties, including 10 deemed to have “critical community spread," are now being encouraged to pass ordinances levying fines against residents and businesses not complying with public health directives. They include the statewide mask mandate Cooper enacted months ago as well as limits on indoor and outdoor gatherings.

The 10 "critical" counties, mainly in rural areas, and 44 others with “substantial” spread also are being asked to consider cutting off alcohol sales earlier than the current 11 p.m. statewide deadline.

And churches in those counties are advised not to hold any indoor gatherings of more than 10 people.

“We may have to do more even on a statewide level or at a local level in some way," Cooper said. “That decision has not yet been made, but we are hoping that this effort can help us slow the spread.”

"Anything that helps people understand how rapidly cases are rising in our area and encourages them to take appropriate action to slow the spread of this virus is certainly welcome," Cone Health spokesman Doug Allred said.

"We are quickly reaching the point where governments will need to consider imposing more restrictions," he said. "Thanks to the folks across our communities who are being careful, but we really need everyone to get serious and take steps to bring this virus under control.

“No one likes the idea of more drastic measures or restrictions. But if we don’t all act soon, we may have no other choice.”

The Associated Press contributed to this story.

To slow the spread of the coronavirus, Cone Health asks people to:

• Wear masks in public areas and around those who do not live with you, including neighbors and friends.

• Celebrate holidays with safety in mind. Limit gatherings to only those in your immediate household, keeping in mind that older people especially are at high risk for severe cases of COVID-19.

• Avoid dining indoors at full-service restaurants and cafes, opting for takeout or outdoor dining instead.

• Limit exposure to people outside your immediate household.

Guilford County has had 311 cases per 10,000 residents since the pandemic began, with 239 deaths attributed to the coronavirus.

If you're eligible, you can get money from the state to help offset costs associated with parenting during the pandemic.

“My only frustration is the anxiety and the fear that it causes residents and employees and residents’ families," said Danielle Hollowell, administrator at Clapp’s Nursing Center in Pleasant Garden. "They don’t deserve that fear and anxiety.”

GREENSBORO — When the next Guilford County Board of Commissioners is sworn in on Dec. 7, Melvin "Skip" Alston will begin another term on a boa…

There were no additional cases documented in Tuesday's report for previous outbreaks at other Guilford County facilities.

Preston Lane has resigned from Triad Stage, the professional theater in downtown Greensboro that he opened with Richard Whittington nearly two decades ago.

The Women to Women Endowment raises money each year by bringing in well-known women as guest speakers at a fundraising luncheon. This year, the COVID-19 pandemic led to a virtual fundraiser that organizers dubbed the "Non-Event."

Some North Carolina low-income households will have one monthly winter heating bill paid for through federal funds, the state Department of Health and Human Services said Monday.

'We are doing this to ourselves,' says Cone Health executive, as COVID-19 hospitalizations continue breaking records

As of early Friday, the Cone Health had 125 patients with COVID-19, not including people in the emergency rooms. That's up from 119 on Thursday, 107 on Wednesday and 103 on Tuesday.