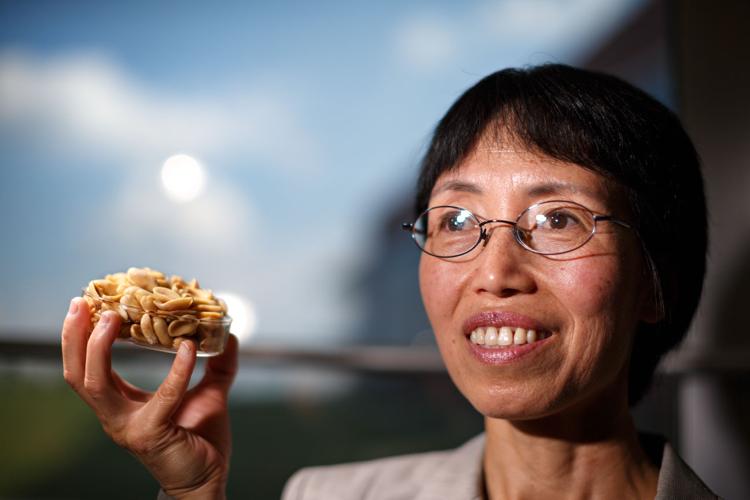 Jianmei Yu, research scientist with the Department of Family and Consumer Sciences at N.C. A&T (part of the School of Agriculture and Environmental Sciences) and chief scientist for Alrgn, shows hypoallergenic peanuts. 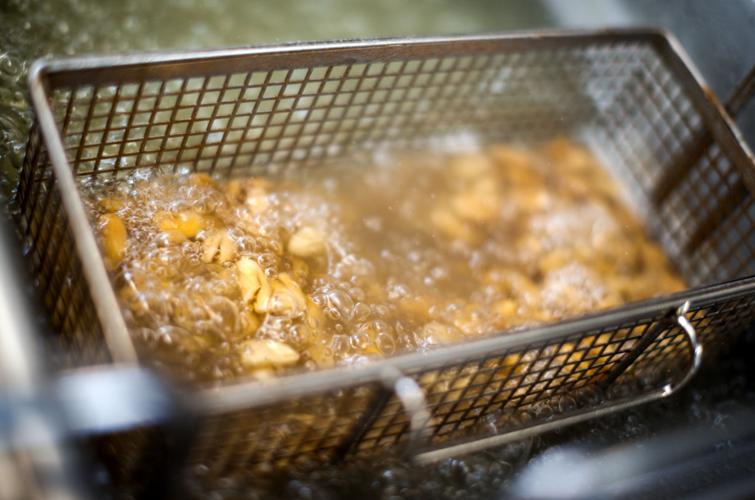 N.C. A&T talks about its hypoallergenic peanuts during a news conference and demonstrated part of the processing technology at the Joint School of Nanoscience and Nanoengineering on Thursday, Oct. 2, 2014, in Greensboro, N.C.

GREENSBORO — Here’s how you take the allergies out of peanuts:

Boil the peanuts. Bathe them. And then dry them.

That’s the short and simple version of a new process developed by N.C. A&T scientists and shown to reporters and others Thursday.

This hypoallergenic peanut could be a lifesaver for millions of people who suffer from potentially deadly allergies. Its backers hope the process will become the industry standard for preparing peanuts for use in more than 5,000 food products.

“The real message is, we’re open for business,” said Johnny Rodrigues, the Canadian businessman who will market the peanut-treatment process on N.C. A&T’s behalf. “We’ve been at this for quite a while. We’re ready.”

Rodrigues and A&T officials on Thursday announced the creation of a spin-off company called Alrgn Bio. (Alrgn is pronounced “Allergen.”) The company will have its office at the Gateway University Research Park on East Lee Street in Greensboro.

Rodrigues is chief commercialization officer of Xemerge, a Toronto technology development company that licensed the hypoallergenic peanut process this summer from A&T. He’s also the president of the new Alrgn Bio, which will market the new technology to peanut processors and food manufacturers. Under the license terms, A&T will get a percentage of sales.

Yu said she started working on creating hypoallergenic peanuts in 2005 in part because their allergic reactions can be so severe.

On Thursday, Yu showed off the technology she patented two years ago.

First: Whole roasted peanuts, stripped of their shells and skins, take a quick dip in hot water. This blanching prepares the peanuts to receive the enzyme in the next step.

Second: The peanuts soak in a warm enzyme bath. This enzyme — a food-grade substance present in bread, cheese and wine, among other foods — neutralizes the proteins that cause allergic reactions.

Third: The peanuts go into an oven to dry, which stops the enzyme reaction.

For a 5-pound batch of peanuts, the whole process takes about 30 minutes.

The processed ones appear slightly more brown than untreated peanuts, probably because the peanut oil rinsed off during the enzyme bath. When ground into flour, there’s no difference. Rodrigues said the processed nuts have the same flavor, texture and nutritional value as untreated ones.

Clinical tests done earlier this year at UNC-Chapel Hill found that the enzyme treatment reduced peanut allergens by about 95 percent. Results from a summer test conducted at an independent lab in Virginia were even better: Allergen levels were nearly undetectable, Rodrigues said.

The next steps include refining the treatment process and scaling up production to satisfy potential customer demand. Rodrigues did not give a timetable when products containing hypoallergenic peanuts would be available in stores. He said it will be soon.

“Not only have we improved on Dr. Yu’s work in the lab ... we’ve proved we can repeat this thing,” Rodrigues said. “This is real.”

Peanut allergy is common, especially in children. Peanut allergy symptoms can range from a minor irritation to a life-threatening reaction (anaphylaxis).

It’s important to get even a minor reaction to peanuts checked out. Even if you or your child has had only a mild allergic reaction in the past, there’s still a risk of a more serious future reaction.

John Wayne Rankin, 71, of Greensboro, died at the scene of the accident on Sept. 15.

Jianmei Yu, research scientist with the Department of Family and Consumer Sciences at N.C. A&T (part of the School of Agriculture and Environmental Sciences) and chief scientist for Alrgn, shows hypoallergenic peanuts.

N.C. A&T talks about its hypoallergenic peanuts during a news conference and demonstrated part of the processing technology at the Joint School of Nanoscience and Nanoengineering on Thursday, Oct. 2, 2014, in Greensboro, N.C.