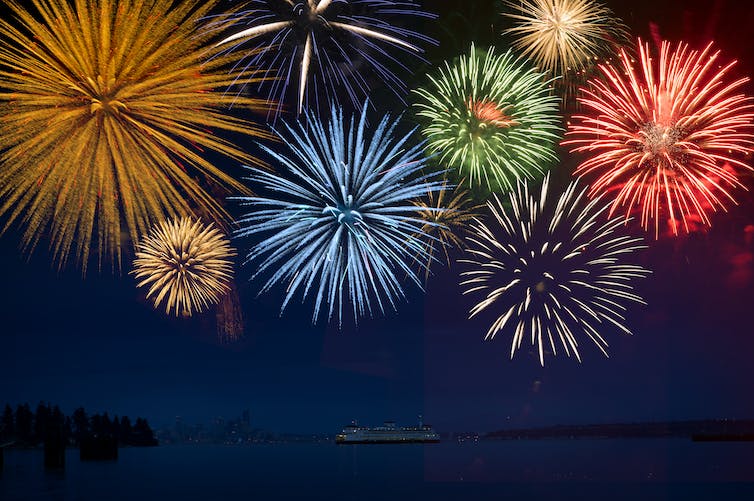 Americans may think they know a lot about the Declaration of Independence, but many of those ideas are elitist and wrong, as historian Woody Holton explains.

His forthcoming book “Liberty is Sweet: The Hidden History of the American Revolution” shows how independence and the Revolutionary War were influenced by women, Indigenous and enslaved people, religious dissenters and other once-overlooked Americans.

In celebration of the United States’ 245th birthday, Holton offers six surprising facts about the nation’s founding document – including that it failed to achieve its most immediate goal and that its meaning has changed from the founding to today.

The Declaration of Independence was written by wealthy white men, but the impetus for independence came from ordinary Americans. Historian Pauline Maier discovered that by July 2, 1776, when the Continental Congress voted to separate from Britain, 90 provincial and local bodies – conventions, town meetings and even grand juries – had already issued their own declarations or instructed Congress to.

In Maryland, county conventions demanded that the provincial convention tell Maryland’s congressmen to support independence. Pennsylvania assemblymen required their congressional delegates to oppose independence – until Philadelphians gathered outside the State House, later named Independence Hall, and threatened to overthrow the legislature, which then dropped this instruction. 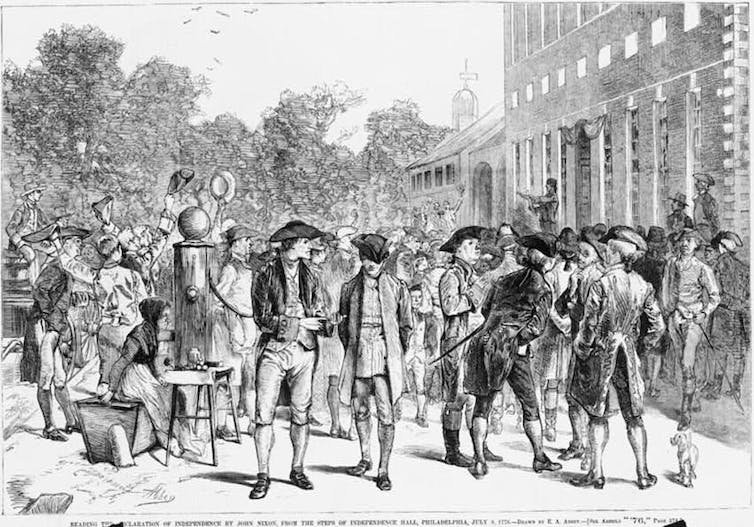 A depiction of the reading of the Declaration of Independence by John Nixon, from the steps of Independence Hall, Philadelphia, July 8, 1776. Edward Austin Abbey, Harper's Magazine, via Library of Congress

American independence is due in part to African Americans

Like the U.S. Constitution, the final version of the Declaration never uses the word “slave.” But African Americans loomed large in the first draft, written by Thomas Jefferson.

In that early draft, Jefferson’s single biggest grievance was that the mother country had first foisted enslaved Africans on white Americans and then attempted to incite them against their patriot owners. In an objection to which he gave 168 words – three times as many as any other complaint – Jefferson said George III had encouraged enslaved Americans “to purchase that liberty of which he has deprived them, by murdering the people upon whom he also obtruded them.”

Numerous other white Southerners joined Jefferson in venting their rage at the mother country for, as one put it, “pointing a dagger to their Throats, thru the hands of their Slaves.”

Britain really had forged an informal alliance with African Americans – but it was the slaves who initiated it. In November 1774, James Madison became the first white American to report that slaves were plotting to take advantage of divisions between the colonies and the mother country to rebel and obtain their own freedom. Initially the British turned down African Americans’ offer to fight for their king, but the slaves kept coming, and on November 15, 1775, Lord Dunmore, the last British governor of Virginia, finally published an emancipation proclamation. It freed all rebel- (patriot-) owned slaves who could reach his lines and would fight to suppress the patriot rebellion.

The Second Continental Congress was talking about Dunmore and other British officials when it claimed, in the final draft of the Declaration, that George III had “excited domestic insurrection amongst us.” That brief euphemism was all that remained of Jefferson’s 168-word diatribe against the British for sending Africans to America and then inciting them to kill their owners. But no one missed its meaning. 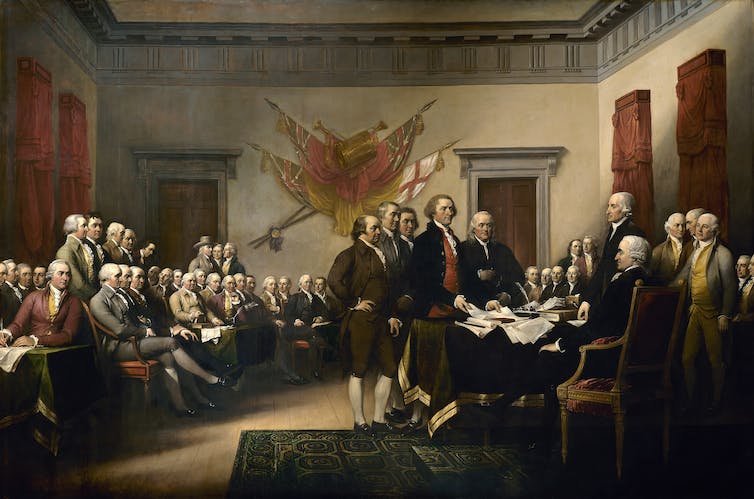 The drafters of the Declaration of Independence present their document to the Continental Congress. John Trumbull via Wikimedia Commons

The complaints weren’t actually about the king

Britain’s king is the subject of 33 verbs in a declaration that never once says “Parliament.” But nine of Congress’ most pressing grievances actually were about parliamentary statutes. And even British officials like those who cracked down on Colonial smuggling worked not for George III but for his Cabinet, which was in effect a creature of Parliament.

By targeting only the king – who played a purely symbolic role in the Declaration of Independence, akin to modern America’s Uncle Sam – Congress reinforced its novel argument that Americans did not need to cut ties to Parliament, since they had never had any.

The Declaration of Independence does not actually denounce monarchy

As Julian P. Boyd, the founding editor of “The Papers of Thomas Jefferson,” pointed out, the Declaration of Independence “bore no necessary antagonism to the idea of kingship in general.”

Indeed, several members of Congress, including John Dickinson of Pennsylvania, openly admired limited monarchy. Their beef was not with all kings and queens but with King George III – and him only as the front man for Parliament.

The Declaration of Independence fell short of its most pressing purpose

In June 1776, delegates who supported independence suggested that if Congress declared it soon, France might immediately accept its invitation to an alliance. Then the French Navy could start intercepting British supply ships bound for America that very summer.

But in reality it took French King Louis XVI a long 18 months to agree to a formal alliance, and the first French ships and soldiers did not enter the war until June 1778. 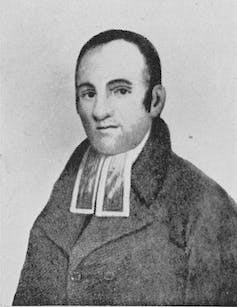 Lemuel Haynes, a free Black man, was one of the first to interpret the Declaration of Independence’s words as applying to individual liberties. New York Public Library

In keeping with the Declaration of Independence’s largely diplomatic purpose, hardly any of its white contemporaries quoted its now-famous phrases about equality and rights. Instead, as the literary scholar Eric Slauter discovered, they spotlighted its clauses justifying one nation or state in breaking up with another.

But before the year 1776 was out, as Slauter also notes, Lemuel Haynes, a free African American soldier serving in the Continental Army, had drafted an essay called “Liberty Further Extended.” He opened by quoting Jefferson’s truisms “that all men are created equal” and “endowed by their Creator with certain unalienable Rights.”

By highlighting these claims, Haynes began the process of shifting the focus and meaning of the Declaration of Independence from Congress’ ordinance of secession to a universal declaration of human rights. That effort was later carried forward by other abolitionists, Black and white, by women’s rights activists and by other seekers of social justice, including Abraham Lincoln.

In time, abolitionists and feminists transformed Congress’ failed bid for an immediate French alliance into arguably the most consequential freedom document ever composed.

Woody Holton received funding from the National Endowment for the Humanities, the Newberry Library, and the Henry E. Huntington library.

How well do you know your U.S. flag? Learn its history and how to display it properly

Fireworks go boom, but how? See from the inside

Photos: Scenes from Juneteenth celebrations across the US

Body found in Wyoming believed to be Gabby Petito

Authorities say a body discovered Sunday in Wyoming is believed to be Gabrielle "Gabby" Petito.

Flood-prone Houston and storm-battered Louisiana are in the path. The hurricane could bring up to 20 inches of rain to parts of the Gulf Coast. Get the latest and follow a map of the storm's path.

Real estate heir Robert Durst was convicted of murdering Susan Berman, shot point-blank in the back of the head in December 2000 as she prepared to tell police how she helped cover up Durst's wife's killing.

Norm Macdonald, a comedian and former "Saturday Night Live" cast member best known as a host of Weekend Update, died Tuesday. He was 61.

A federal advisory panel endorsed a plan to give Pfizer booster shots against COVID-19 to those who are 65 or older or run a risk of severe disease after rejecting a plan to give extra shots to most Americans.

Virginia woman gets 12 years for what could be biggest coupon scheme in U.S. history

It was described in court papers as possibly the biggest counterfeit coupon scheme in history, costing about 100 retailers and manufacturers more than $31 million in losses.

Candace Ayers' obituary says she "was vaccinated but was infected by others who chose not to be. The cost was her life."

A federal advisory panel endorsed a plan to give Pfizer booster shots against COVID-19 to those who are 65 or older or run a risk of severe disease after rejecting a plan to give extra shots to most Americans.