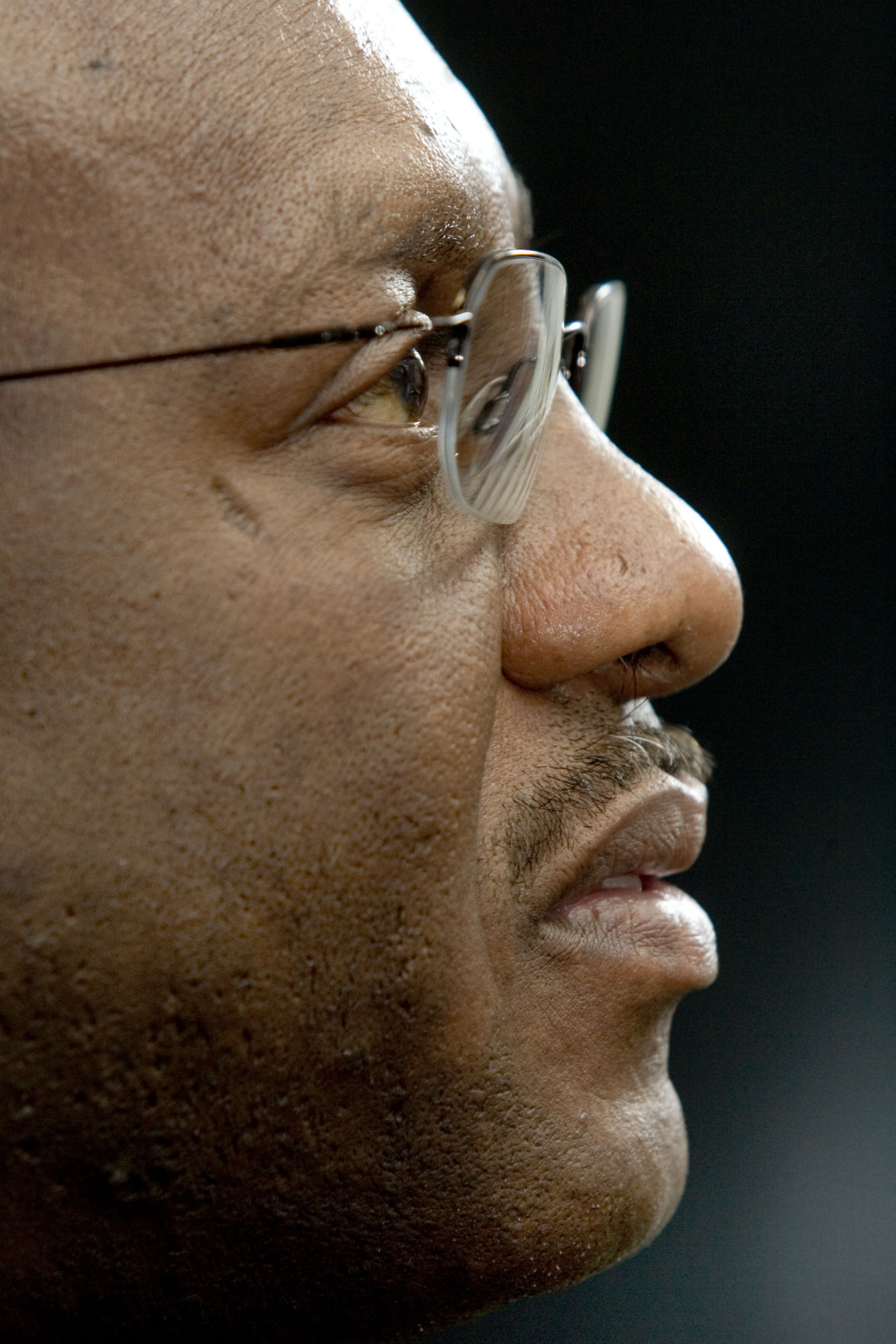 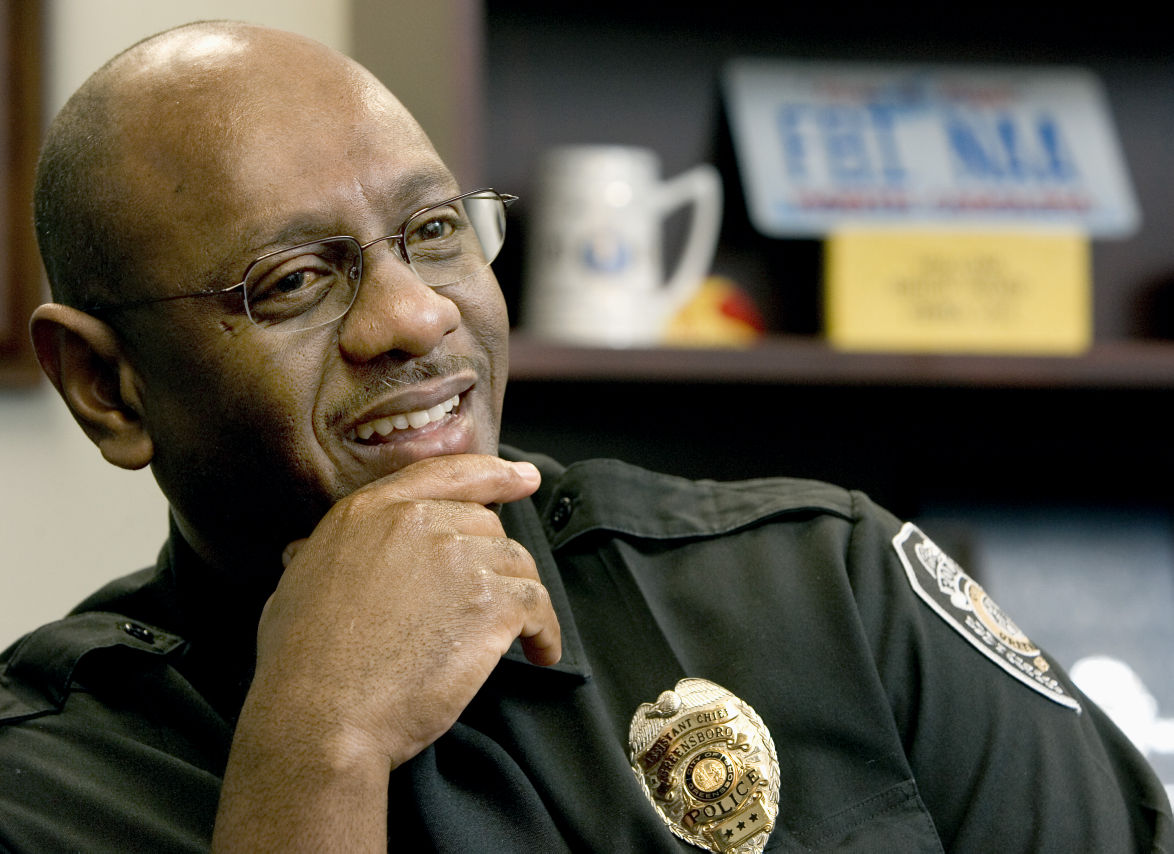 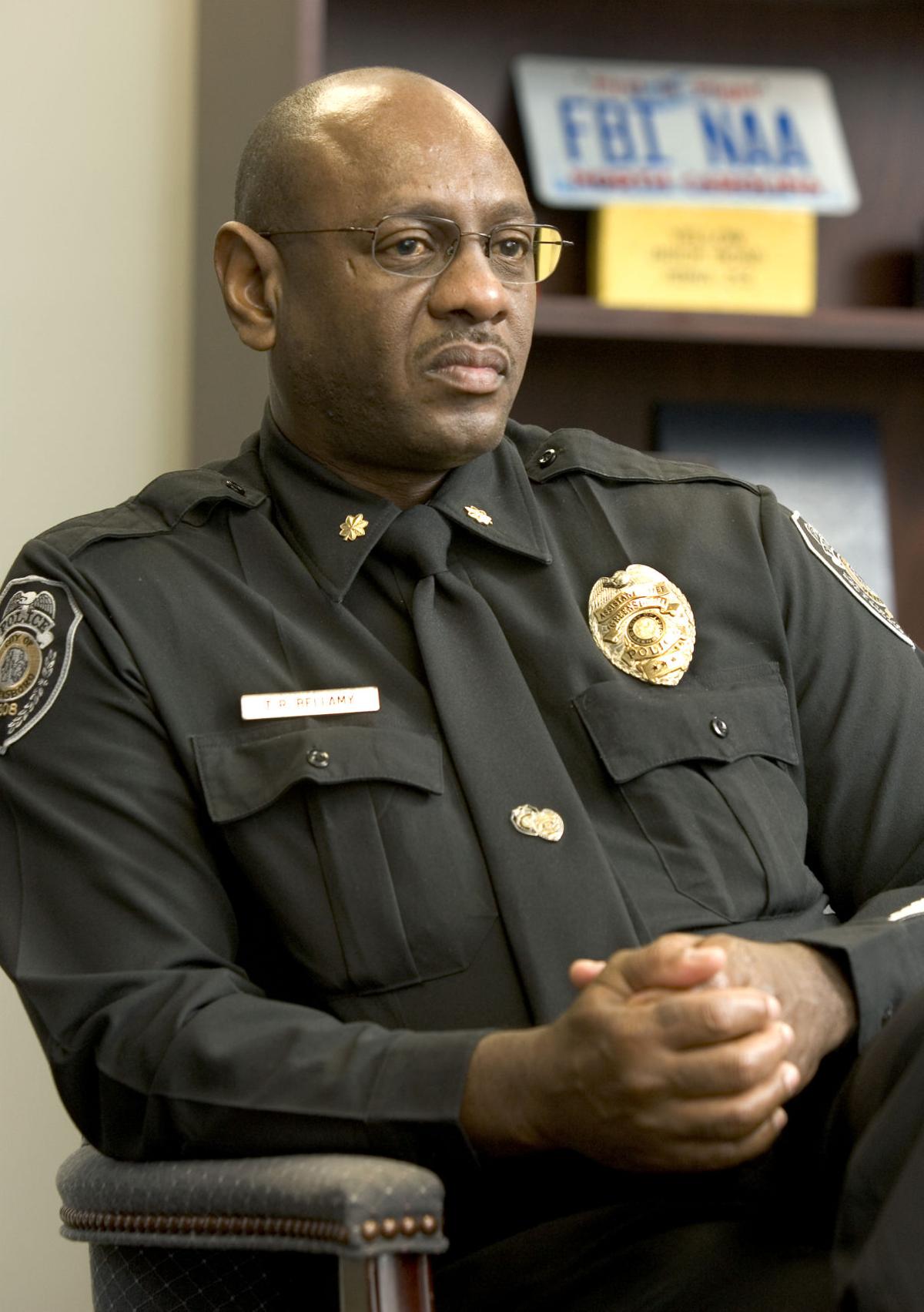 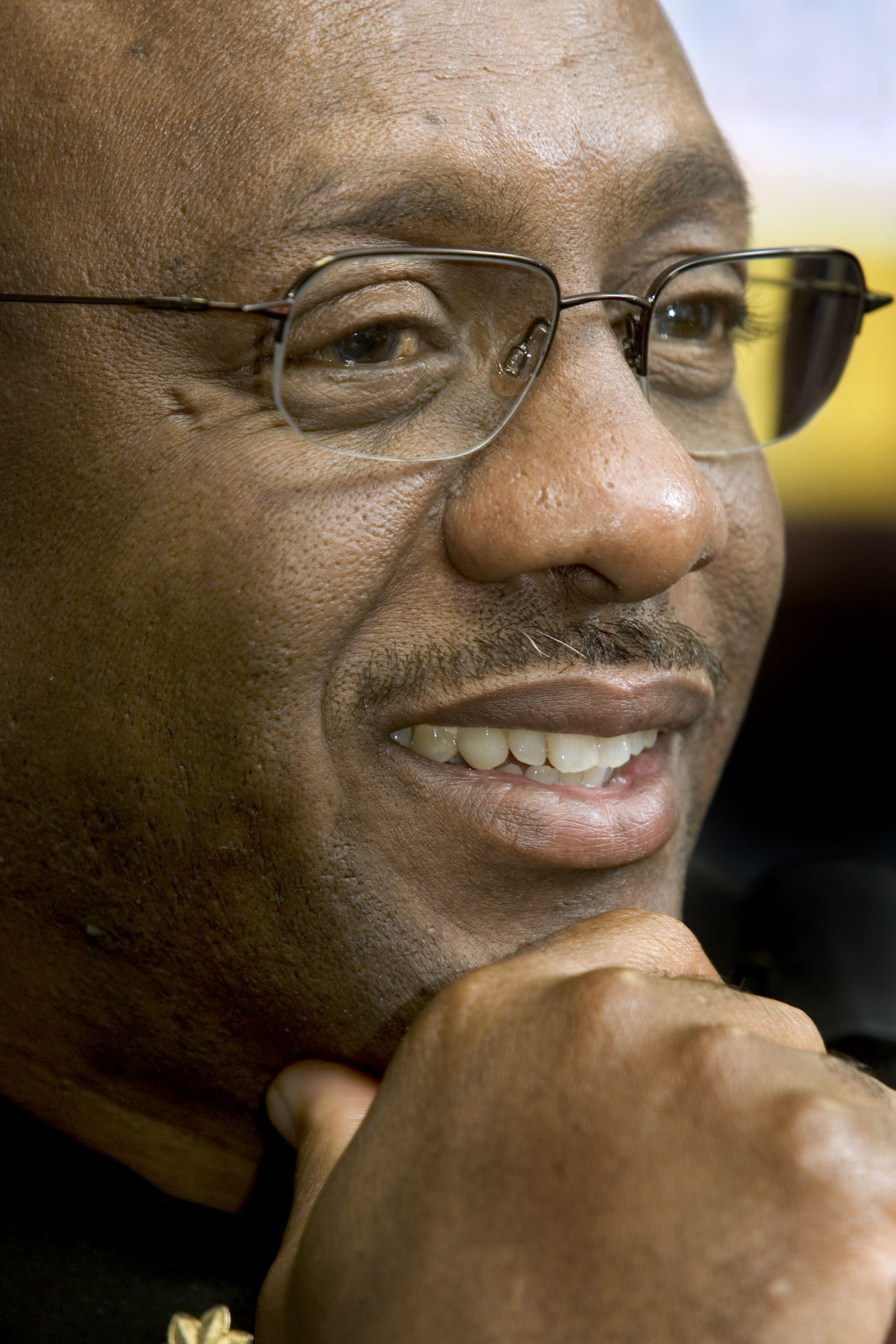 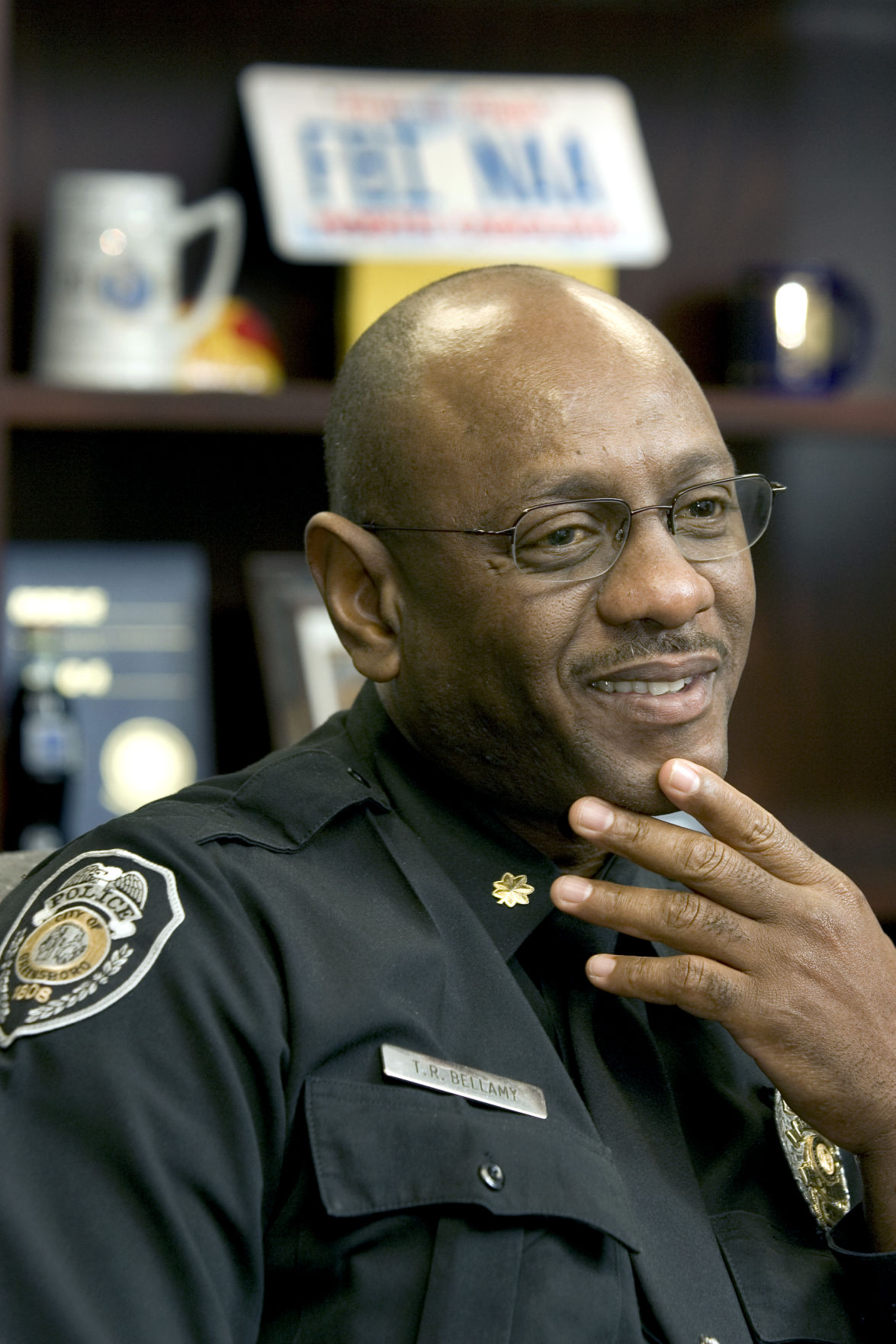 GREENSBORO — Less than a half hour after the police chief resigned Monday, assistant Chief Tim Bellamy was in the hot seat.

“At 8:45 a.m., my role had somewhat changed,” he said in an interview Thursday with the News & Record.

Now interim Chief Bellamy’s phone won’t stop ringing. He remains in the office he had as assistant chief, but he has to keep the blinds closed to keep away from the prying eyes of the media.

The veteran officer, who is described as fair, a good mediator and the consummate professional, must now lead the department in the face of controversy and tough questions.

“Anything that needs to be uncovered or dealt with in this organization, I will make sure that it’s done in the appropriate manner,” he said.

And City Manager Mitchell Johnson said Thursday that the city would hold off on a search for a new permanent chief until Bellamy has the chance to make changes.

Former Chief David Wray resigned Monday amid questions over his handling of the Special Intelligence section — dubbed the “secret police” — and irregularities over personnel matters.

On Tuesday, Johnson said Wray tried to cover up the actions of Special Intelligence, which included hiding a “black book” with the pictures of 19 African American police officers and targeting of black officers for internal investigations.

Bellamy has since met with his command staff and some of the rank-and-file officers. He has told officers their job is to carry out the day-to-day police operations.

No one is more deserving to carry out this job than Bellamy, said Capt. Mike Oates, who entered the police academy with Bellamy in 1983.

“I think you would be hard-pressed to find anyone who could pull us through this better than Chief Bellamy,” Oates said.

The new leader is a stand-up guy who is up to the task, said Sgt. W. Graves, who’s worked with Bellamy.

“Is he strong enough to do it? I think so,” he said. “His record speaks for itself.”

Morale has improved in the department since Monday, they said.

“Officers are happy that we’re putting what were rumors behind us,” Oates said.

“It’s a relief that this is coming to a head,” Graves echoed.

Other changes will require further review of probes by the city into actions Wray and Special Intelligence took. Bellamy said he is in the midst of reviewing a copy of the first of two reports.

He doesn’t think the way the situation escalated this week has hurt morale, particularly because the rumors of a “black book” had been around for three or four years and Hinson has been suspended since June. Wray denied Wednesday that the book was used for racial profiling.

Bellamy has seen which officers are in it, but he wouldn’t say whether he was included.

“I can’t comment as to who those officers are,” he said of the book that is now secured.

Asked if he ever felt targeted, Bellamy said: “I knew that I never did anything.”

But, he said, he doesn’t yet know how the book was used and what it was used for.

“If it was used inappropriately, I have strong feelings against that,” he said.

Bellamy didn’t go into further detail about the book’s implications within the department. And he wouldn’t discuss whether race played a role in his selection as interim chief.

Man for the job

Johnson said he chose Bellamy for his character and wide-ranging experience in the department. He’s been impressed by what he’s seeing so far and by what officers are telling him.

“He is someone throughout this process who has behaved with absolute integrity and has really maintained my respect and trust,” he said.

Eddy Summers, president of the Greensboro Police Officers Association, said the union is impressed by those same qualities in Bellamy.

“He appears to be a fine individual, capable of handling the task at hand as interim chief,” he said.

Bellamy has the full power of the chief’s office — unlike Wray, who in his last month was not allowed to fire or transfer officers without Johnson’s approval. Bellamy plans to make some promotions in the coming weeks.

But he won’t change the officers’ schedules, a sore point with many officers who did not like Wray’s decision last year to implement rotating schedules. That is a job for a new chief, he said.

Bellamy hopes the new chief “will listen to the men and women of the police department.”

In the meantime, the Hallsboro native said he will lead the department in the same manner he has performed other jobs.

“My biggest attribute is just do what’s right and be fair about it and be humble,” he said.

Michele Forrest, a member of the Homeless Prevention Coalition of Guilford County, worked with Bellamy on the problem of panhandling. Forrest said Bellamy was fair and worked to uphold the law and make sure that everyone — including the homeless — had their voices heard.

“He does his job, but he does it in such a way that people feel they’ve been heard,” she said.

Bellamy is also known to get out of the office. He’s surveyed areas that have known drug problems, Oates said. And he’s walked through downtown on the weekends to get a sense of what the issues are there.

“I’m here to serve in the position as long as they want,” he said.

He’s coy on whether he will apply for the job.

“No one will ever know that but me,” he said.

If Bellamy does want to be chief, the next few months will give the city a chance to see if he is the man for the job, said Dorothy Brown, president of the Ole Asheboro Neighborhood Association.

“I think that the next six months is going to be a healing process,” she said.

Origami-inspired clothing line is designed to grow with your child

Origami-inspired clothing line is designed to grow with your child