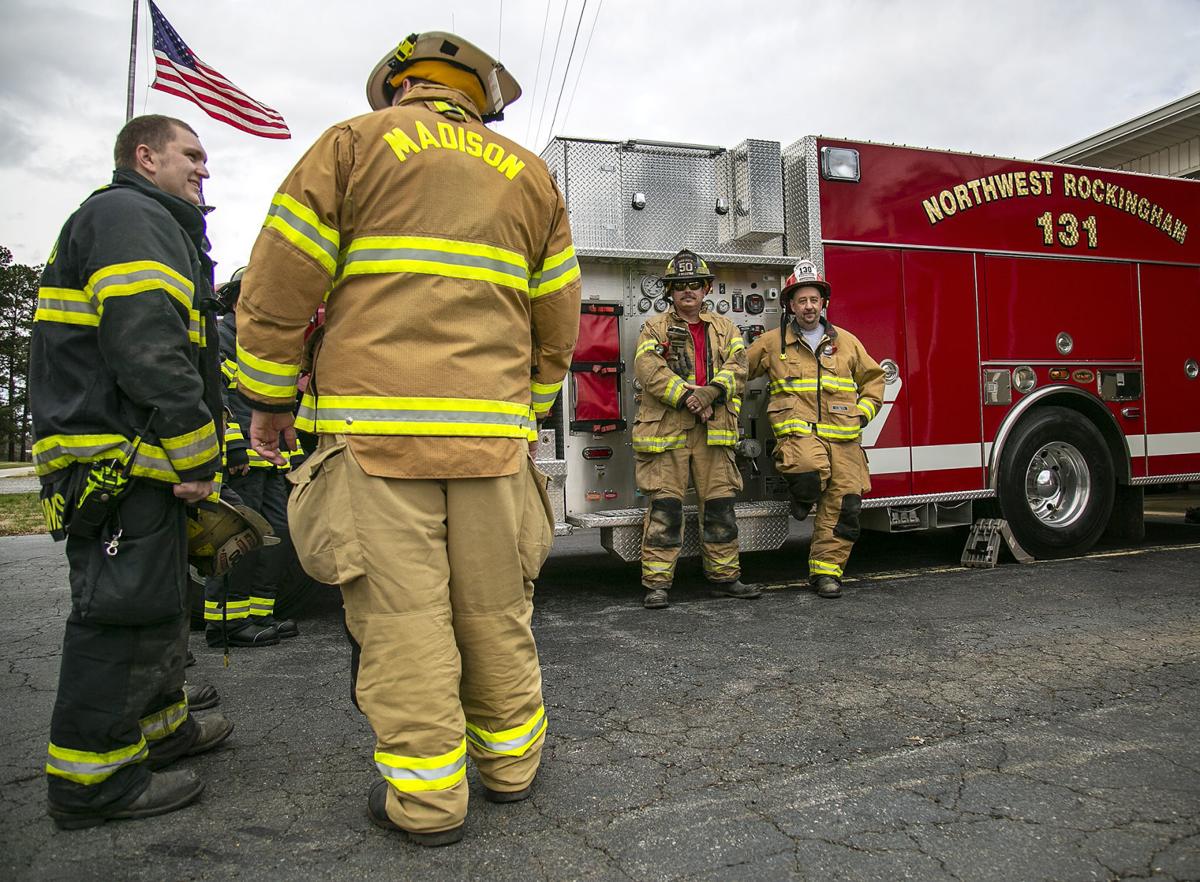 Standing by a firetruck at the Northwest Rockingham Volunteer Fire Station in Mayodan on March 14 are (from left) Mason James, Clint Smith, Pete Webster and Jeremy William 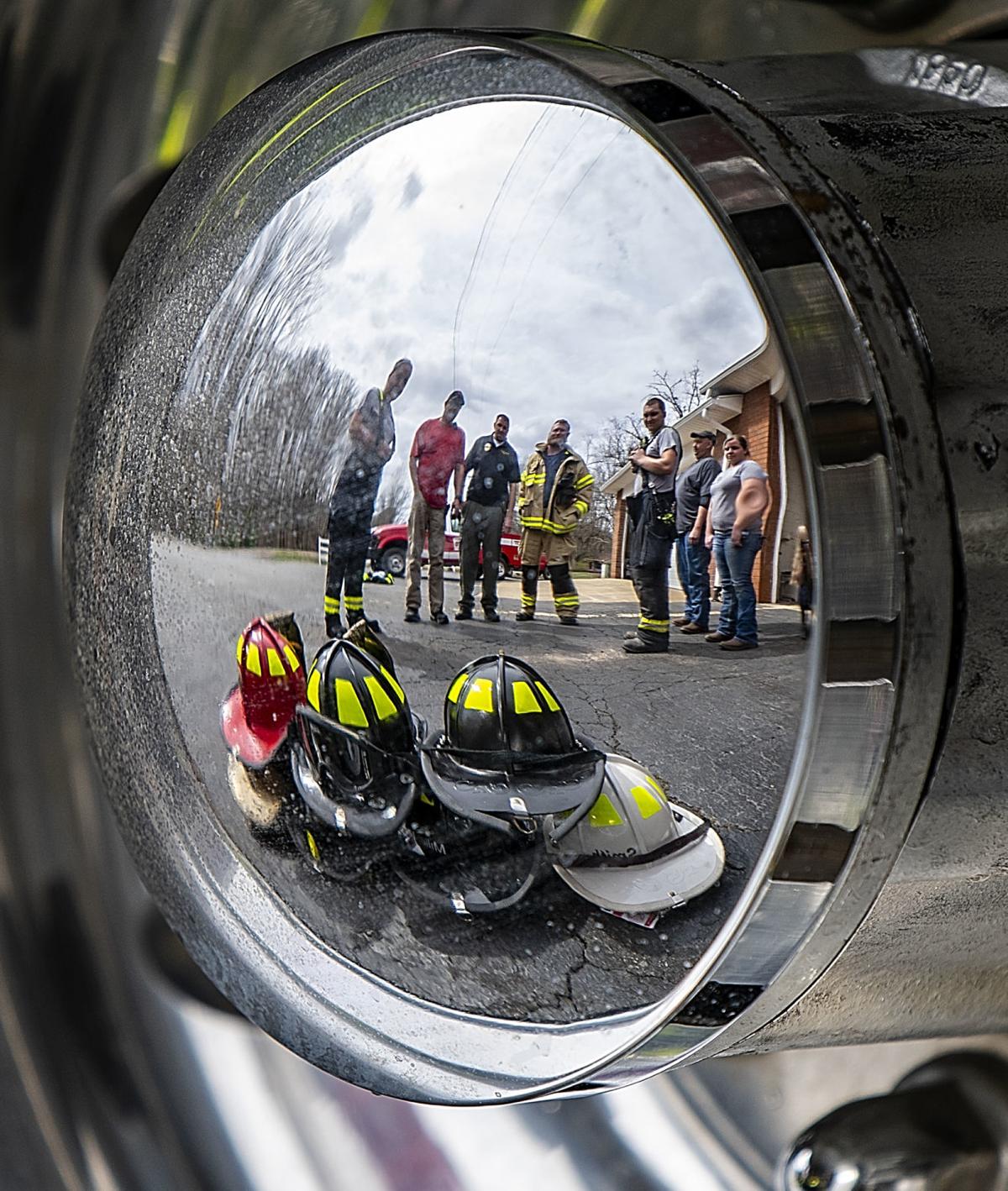 A reflection of the volunteer firefighters and their helmets in one of the firetruck’s wheel in Mayodan. Jon Worley, fire chief at the Yanceyville Road Volunteer Fire Department in the Lawsonville Community said, “according to the National Volunteer Fire Council, volunteers make up 70 percent of firefighters across the country.” 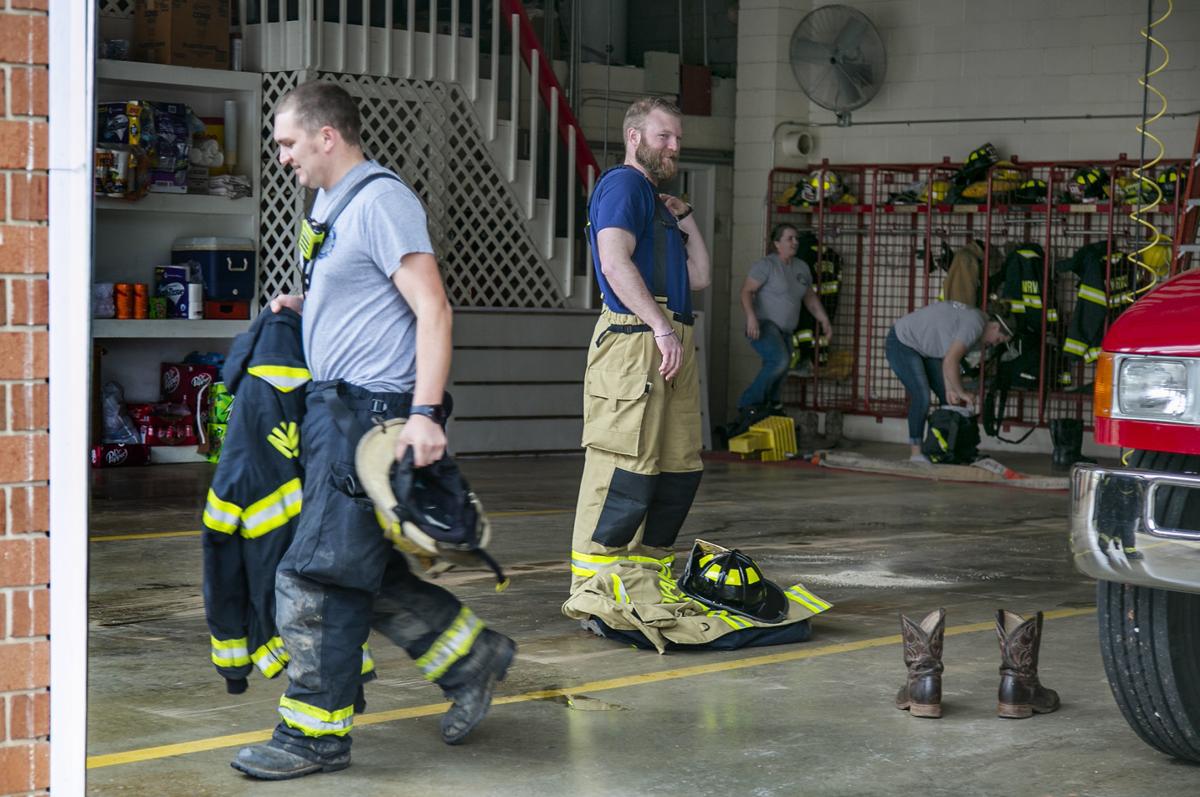 More than 600 volunteer firefighters retired or quit in North Carolina last year, according to Jon Worley, the fire chief at the Yanceyville Road Volunteer Fire Department in the Lawsonville Community.

“There is a shortage, not only in N.C., but nationwide,” Worley said. “According to the National Volunteer Fire Council, volunteers make up 70 percent of firefighters across the country.”

Rockingham County is not immune to the shortage.

“We have definitely been affected with some retiring, and we’ve seen a decrease in the number responding to the call to be volunteers,” said Mason James, the fire chief for the Northwest Rockingham Fire Department. “There’s an increased demand for service, and many long-timers are aging out.”

In addition to increased requirements, training hours and continuing education classes, Worley said he sees another reason for the shortage — a generation gap.

“Our fathers would leave their jobs and go to fire calls, but now both parents in a family are often working, sometimes more than one job, so it makes it tough,” he said.

For both men, the positives outweigh the negatives.

Worley, James and their fellow firefighters work hard to spread the word about the need in the county and share their stories about the satisfaction of serving your community.

Growing up, Worley spent many a day accompanying his volunteer-firefighter parents to the local fire station and on calls.

“I saw them give to the community and help others in their time of need, and that inspired me,” he said.

Married and the father of three children, Worley admits that juggling his hectic schedule can be difficult, but he wouldn’t have it any other way.

It’s not uncommon for him to get calls in the middle of the night, have to get up from the family dinner table or leave a school function to take a call.

“Being a volunteer firefighter is not for everyone, and you have to have a supportive spouse and family, and I definitely do,” Worley said. “We do it to be there to answer the call when others need help.”

Like Worley, James became a junior firefighter at age 16.

He joined in 2007, shortly after the local fire department responded to help his grandfather, who was having health issues.

“I wanted to learn about the medical side,” he said.

“We have a limited amount of EMS units in the county, so we (fire departments) help,” James said. “Really, we are first responders.”

He also serves as a full-time lieutenant with the Pinecroft Sedgefield Fire Department in Guilford County.

James said that because of the shortage of volunteers, he and his fellow volunteer firefighters have to stay in constant contact with each other and communicate when they are going to be out of the district so they can cover each other.

Some volunteer stations are supplementing their volunteers with paid daytime staff.

“Many stations in the county have had to resort to this because of the shortage,” Worley said. “This takes more taxpayer money.”

Rockingham County has about 700 volunteer fire and rescue personnel, both male and female, and 26 stations.

Each department may have separate requirements for serving, but most require at least 36 hours of fire training a year.

“That’s not bad when you look at the whole year; that’s really one training per month,” James said. “Most of our volunteers exceed that; I had one volunteer log over 300 training hours last year.”

Some departments have a requirement that firefighter certification be completed within a certain amount of time, but James said volunteers can attend a nighttime fire academy at Rockingham Community College and receive their certification in less than a year.

Depending on the department, other requirements include having a decent driving record, being able to pass a criminal background check and living in or in close proximity to the fire district.

Volunteer firefighters must be at least 18, and volunteers can become a junior firefighter at 16.

Each department also has its own set of unique standards associated with the needs of its district. The most common job responsibilities and duties include participating in training and responding to emergency incidents. Other duties include learning the apparatus of that particular department, maintaining required training hours and serving the community 24/7.

“The volunteer fire and rescue departments play a major role in the safety of the general public of Rockingham County,” James said. “Most situations when you call 911, you are going to get either a fire department or rescue squad, and those individuals that respond are more than likely volunteers.”

Volunteers provide basic life support to patients on medical calls until an advanced level of care arrives, such as an EMS unit.

Some departments have Fire Explorer programs through the Boy Scouts of America, and some have Junior Firefighter programs. (The age ranges vary by department, with some allowing students as young as 14.)

The Rockingham County High School Public Safety Academy is also available to any student in the county school system. Started in 2013, the program allows participants to obtain six high school credit hours in the four-year program. Participants cam earn National Incident Management System certifications, and during their sophomore, junior and senior years participants take Fire Tech I, II and III classes and can earn their N.C. firefighters certification. Josh Evans, the fire chief at the Bethany Volunteer Fire Department, directs the academy, and said it has close to 80 students enrolled. Students who do not attend Rockingham County High but would like to attend the academy may apply for the program and if approved transfer to the school. To date, the program has had 71 students from the program join a fire department or the EMS, with 25 becoming volunteer first responders.

“We hope to help get these kids careers and get them out in the community helping and volunteering,” Evans said. “The Public Safety Academy is a great way to build resumes and experience.”

James said he remains optimistic about the future of volunteer fire departments in Rockingham County and hopes to see volunteer departments become a thriving part of everyday life and the center of the community, a place where people come to hang out and be willing to serve.

“I would love to see training rooms with no empty seats and a call response of over half the department,” he said. “We can get there; I hope anyone that has a willingness to serve will take that step and join a volunteer department.”

Standing by a firetruck at the Northwest Rockingham Volunteer Fire Station in Mayodan on March 14 are (from left) Mason James, Clint Smith, Pete Webster and Jeremy William

A reflection of the volunteer firefighters and their helmets in one of the firetruck’s wheel in Mayodan. Jon Worley, fire chief at the Yanceyville Road Volunteer Fire Department in the Lawsonville Community said, “according to the National Volunteer Fire Council, volunteers make up 70 percent of firefighters across the country.”