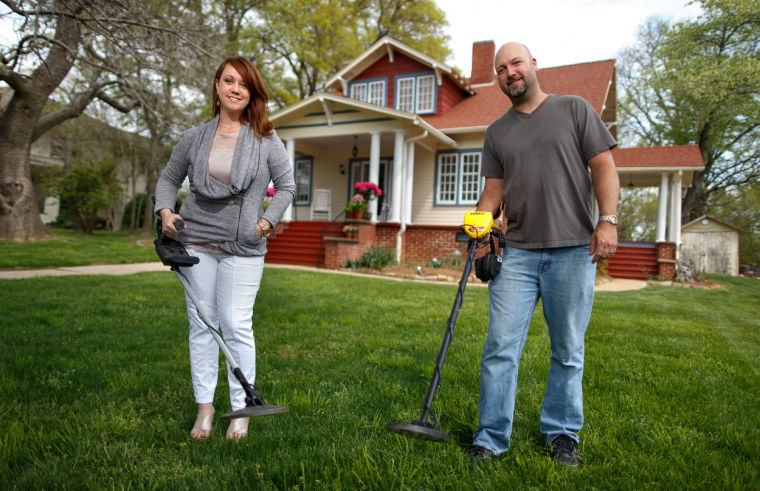 Mandy and Todd Pottorf with their metal detector in front of their historic home in Madison. They have been digging up the history surrounding their 1907 home using metal detectors. 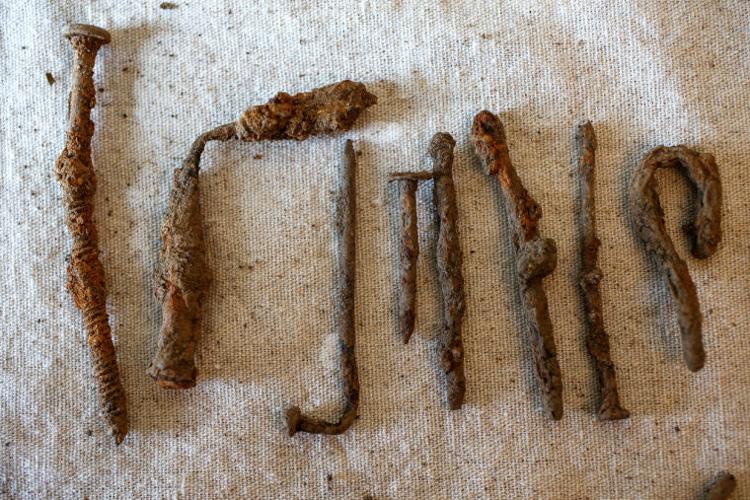 A collection of old nails found at the Pottorf home. 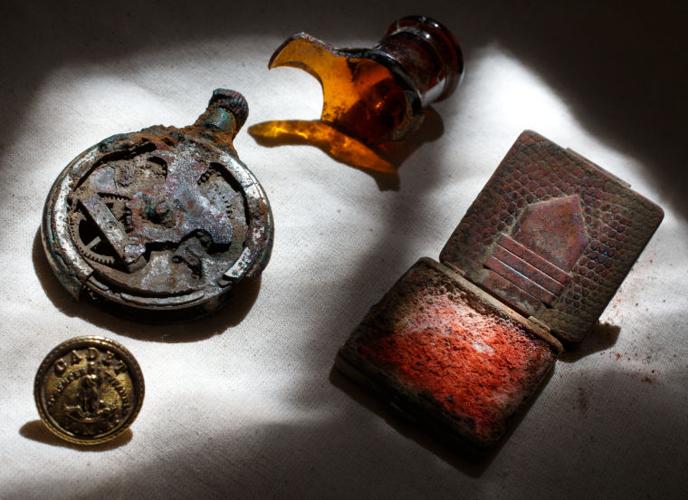 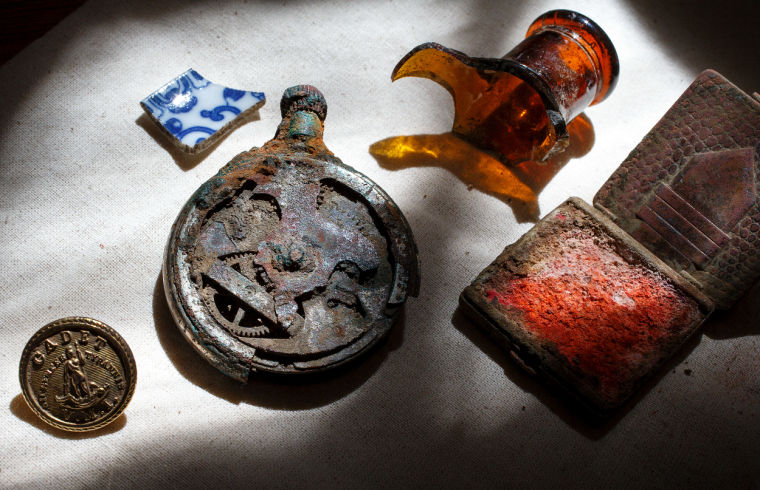 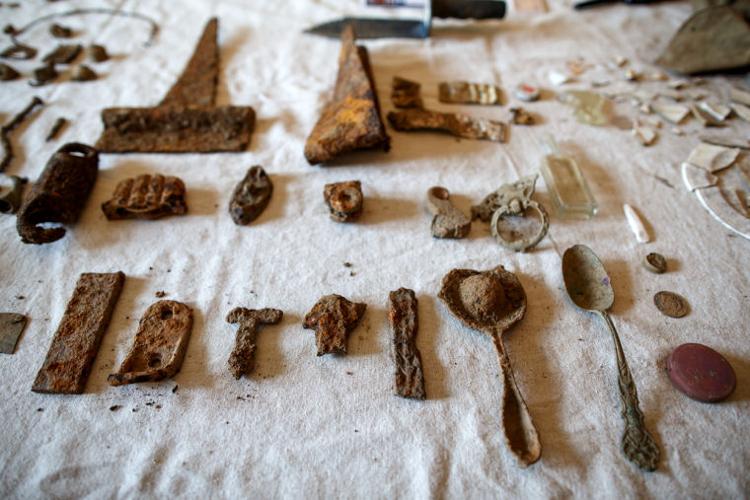 Mandy and Todd Pottorf have been digging up the history surrounding their 1907 home using metal detectors.

MADISON — To say the least, Mandy and Todd Pottorf’s landscaper is a bit miffed.

New ones that pop up in the backyard every week.

That’s what he finds when he shows up to cut the grass at their Madison home, a story-and-a-half house that is more than

And he quickly found out that it wasn’t some pesky critter doing the damage.

You see, the Pottorfs are making the holes themselves.

They have a project underway, and lawn aesthetics won’t to stop them.

One spade-full at a time, their shady stretch of earth is giving up her secrets, offering the Pottorfs clues about the other people who have lived in their West Hunter Street bungalow over the course of the past century or so.

It all started with a glass flavoring bottle. Todd made that first find while doing some yardwork shortly after the couple purchased the home a year ago.

“I bet there’s tons of stuff in this yard,” Mandy told him.

They borrowed a metal detector and started to dig.

“We can’t go 5 feet without finding something,” she said.

Right away, they unearthed two makeup compacts — one that has a stamped metal label identifying it as a Dorothy Gray cosmetic product. One still has rouge in it, and Mandy believes it probably dates to the 1920s.

That was the find that helped Mandy begin conjuring those who came before her. She likes to picture a woman sitting at a dressing table, applying her rouge, perhaps preparing for a ladies’ club meeting.

Discovering the compacts only fueled the Pottorfs’ interest. They purchased their own metal detector and some tools, along with a small probe-like detector that helps them fine-tune their searches once the digging is underway.

Nails. Pipes. Window and furniture hardware. Pieces of tools. Spoons — even part of a lemon press. They have amassed pieces of metal that they’ve found.

In between digs in the yard, Mandy also is digging through historical records, trying to unearth the house’s history.

She knows the home was built by Robert Baird Webster in 1907. His daughter, Josephine Webster Penn, also occupied the home. And Mandy hopes anyone in the area who knows about other residents will share their information with her. In fact, she would love to see old photos of families in the home or pictures of the house.

For now, she’s making do with her finds and her imagination.

They found a printer’s plate with the words “Wentworth, N.C.” on it. She donated it to the Museum and Archives of Rockingham County. But in the future, Mandy believes she’ll keep the items in the home. And if they ever sell the house, she said the items will stay. They are a part of the house.

She’s assembling shards of china, trying to see what china pattern a onetime owner may have used.

Mandy and Todd keep digging because, every now and then, they find something special.

Her favorite item is a pocket watch from the 1930s. Its inner workings are exposed and corrosion has encrusted it.

“It’s not very valuable, but it tells a story,” Mandy said.

Once again, she’s conjuring that story, picturing a gentleman pacing the hallway, repeatedly pulling the watch from his trouser pocket as he waits for a child to be born in one of the bedrooms.

A button from a Virginia Military Institute uniform also intrigues her.

She pictures a handsome young cadet maybe enjoying a graduation party in the backyard. She’s also found spats, a type of fabric footwear worn by men in the 1920s and 1930s.

And then there’s the not-so-imaginary voice they’ve heard in a first-floor bedroom. A ghost, perhaps?

She’s not ruling out anything.

But there’s more to the home than its history.

The present is pretty enticing, too.

The couple, who moved from Charleston, S.C., to Madison when Todd accepted a job as nurse anesthetist at Morehead Memorial Hospital, said they loved living in the historic South Carolina city but never could afford to own one of the older homes they admired.

In Madison, a historic home is much more affordable.

“Here, we get everything we loved about Charleston without the cost,” Mandy said.

They can walk to friendly restaurants and diners and visit interesting downtown shops.

They enjoy living in a place where there’s a strong sense of community. In fact, when they moved in, neighbors quickly informed them that their house is the Halloween house. Several of the homes on Hunter Street have been assigned a holiday, and the owners graciously host a neighborhood gathering for their particular holiday.

So in the fall, the Pottorfs held their first Halloween soiree.

“This is the best move we’ve ever made,” Mandy said.

And though she hopes they’ll live in the house for a very long time, she does think about others who may come after she and Todd are gone.

“When we moved in, the first thing we did was get down on our knees and thank God for our home and ask Him to bless it and the families that would live here after us,” she said.

With that mind-set, they also are considering that future residents might one day be curious about them.

Just in case, Mandy has a plan.

So future treasure hunters won’t be disappointed, they plan to bury a bit of their own trash in the backyard.

DA: Cocaine detected in body of boy who died with his twin brothers in Greensboro house fire

Three children died in the Dec. 19 fire and their mother has been charged with child abuse.

Earth's inner core may have stopped turning and could go into reverse, study suggests

Scientists are weighing in on what it might mean.

A man died early Sunday and several people were hurt in a shooting at Southside Johnny’s, an adult entertainment business on Market Street, Gr…

Driver dies after wheels come off pickup truck in Greensboro

A pickup truck driver was fatally injured Thursday when his left rear dual wheels came off and the truck flipped on Interstate 85 in Greensboro.

On most weekends, Tyre Nichols would head to the city park, train his camera on the sky and wait for the sun to set.

The cause of the Dec. 19 fire remains under investigation.

A family spokesman said visitation and the funeral service are open to anyone in the community who wants to respectfully express their condolences.

Two die in separate shootings on Saturday in Greensboro

Gun violence claimed the lives of two people on Saturday in separate incidents, according to the Greensboro Police Department.

"Their lives were taken too soon — yet their legacy lives on from the shores of Jamaica to the campus of N.C. A&T."

Mandy and Todd Pottorf with their metal detector in front of their historic home in Madison. They have been digging up the history surrounding their 1907 home using metal detectors.

A collection of old nails found at the Pottorf home.

Mandy and Todd Pottorf have been digging up the history surrounding their 1907 home using metal detectors. 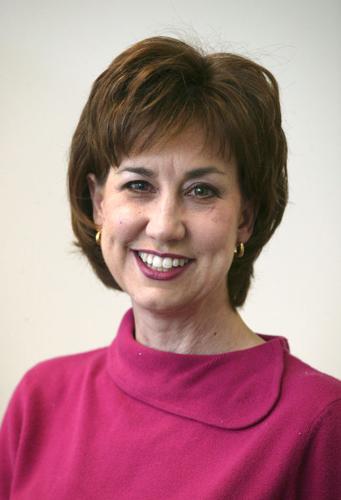