GREENSBORO — I can’t imagine the Rolling Stones’ jet without a plush couch, a bar, mirrors on the ceiling and bedrooms in the back.

Back when my life was devoted to term papers and SAT scores, I caught stories and photos of their depraved mid-air parties with the longing imagination only an adolescent boy can appreciate.

The tour plane I saw Tuesday resonated with one stark message: We’re all a lot older.

Swift Air, which flies elite sports teams and pop stars around North America, was putting the final touches on the Boeing 737-400 that will take the Stones on their 2015 “ZIP Code” tour beginning this week. 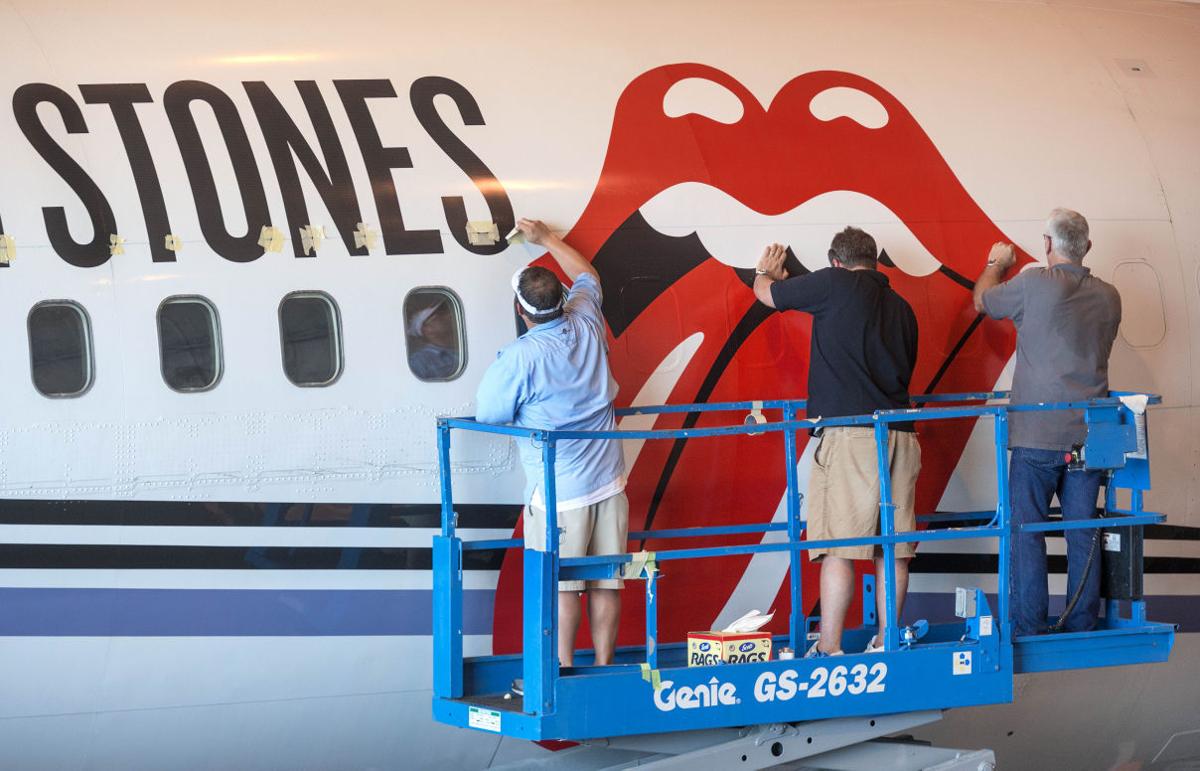 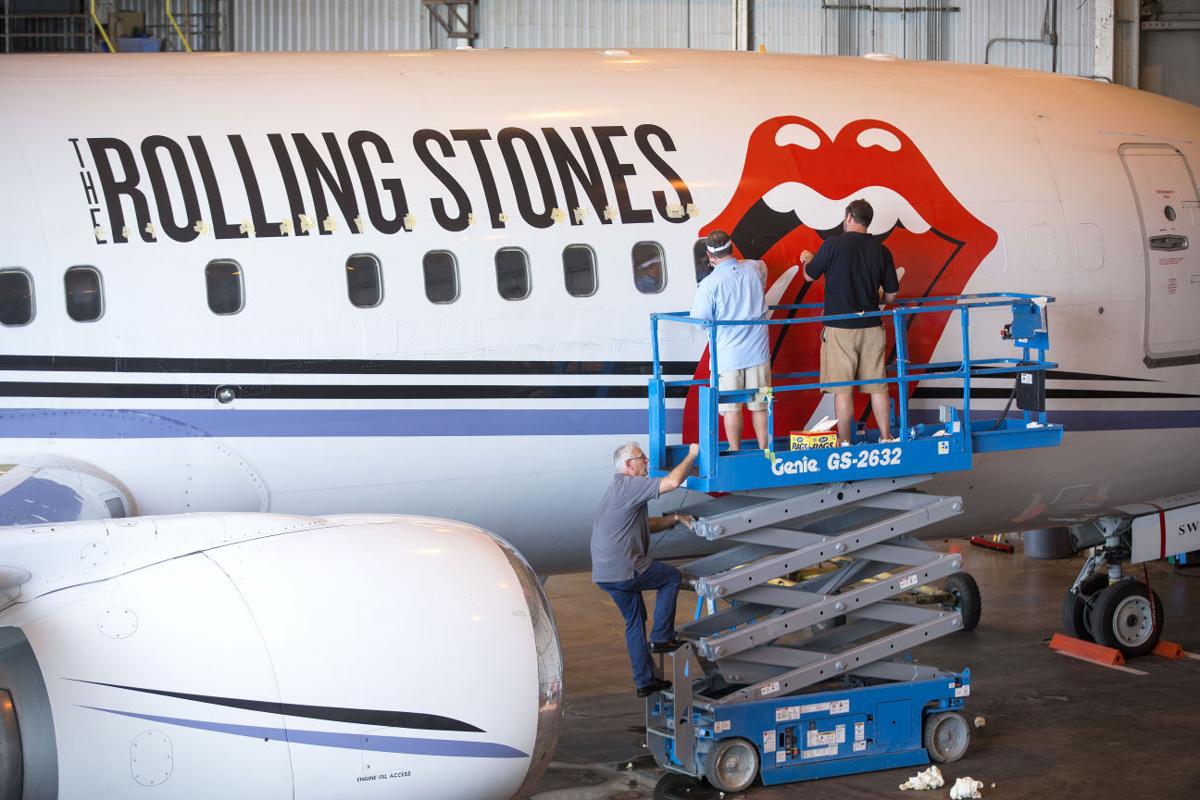 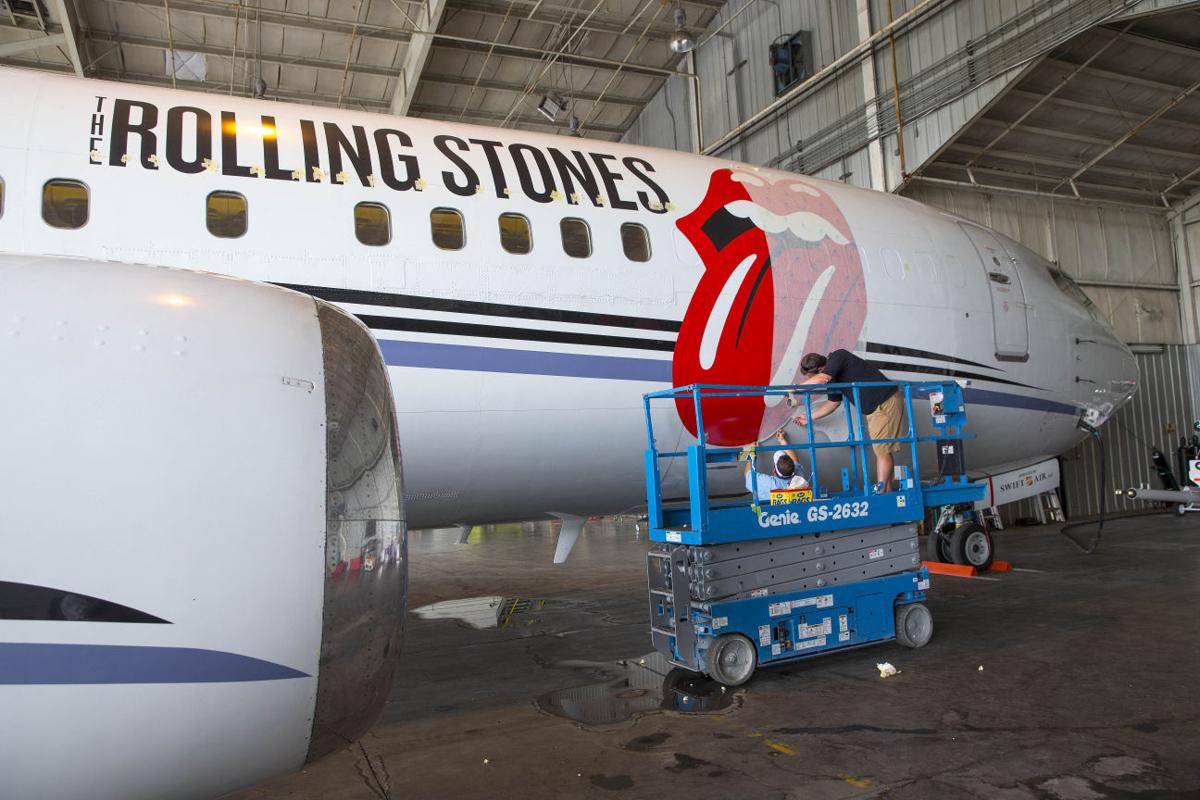 Crew from Solo Graphic install the Rolling Stones' logo on a 737 jet. 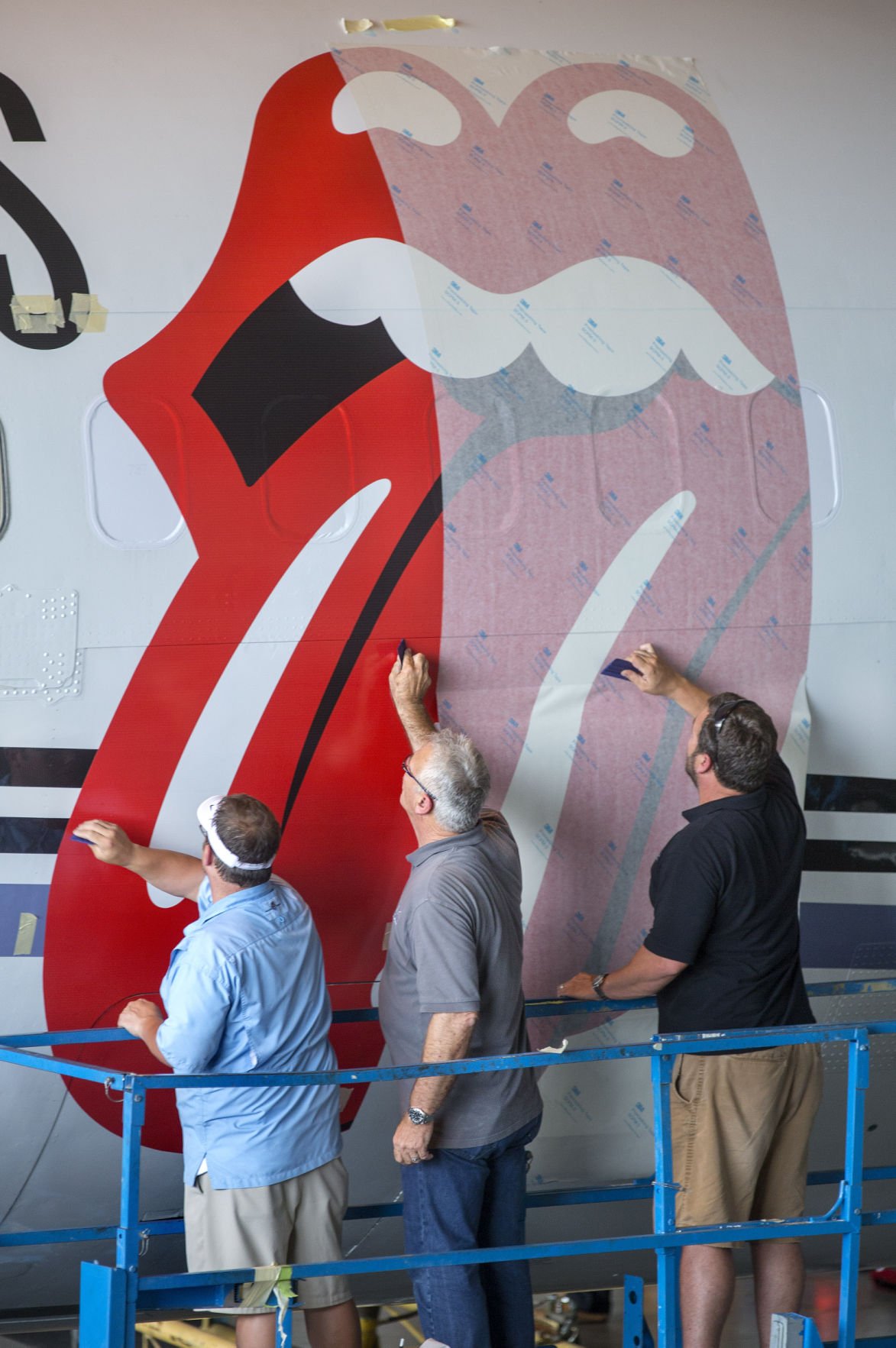 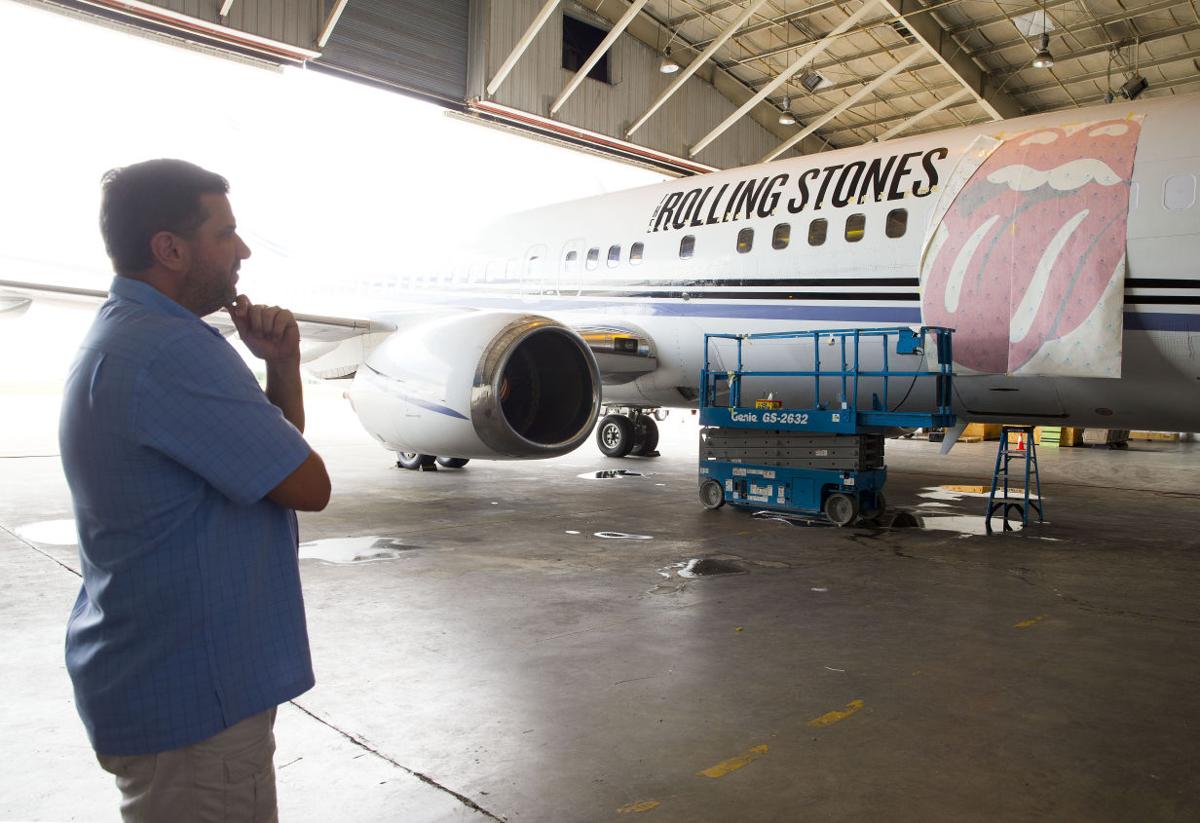 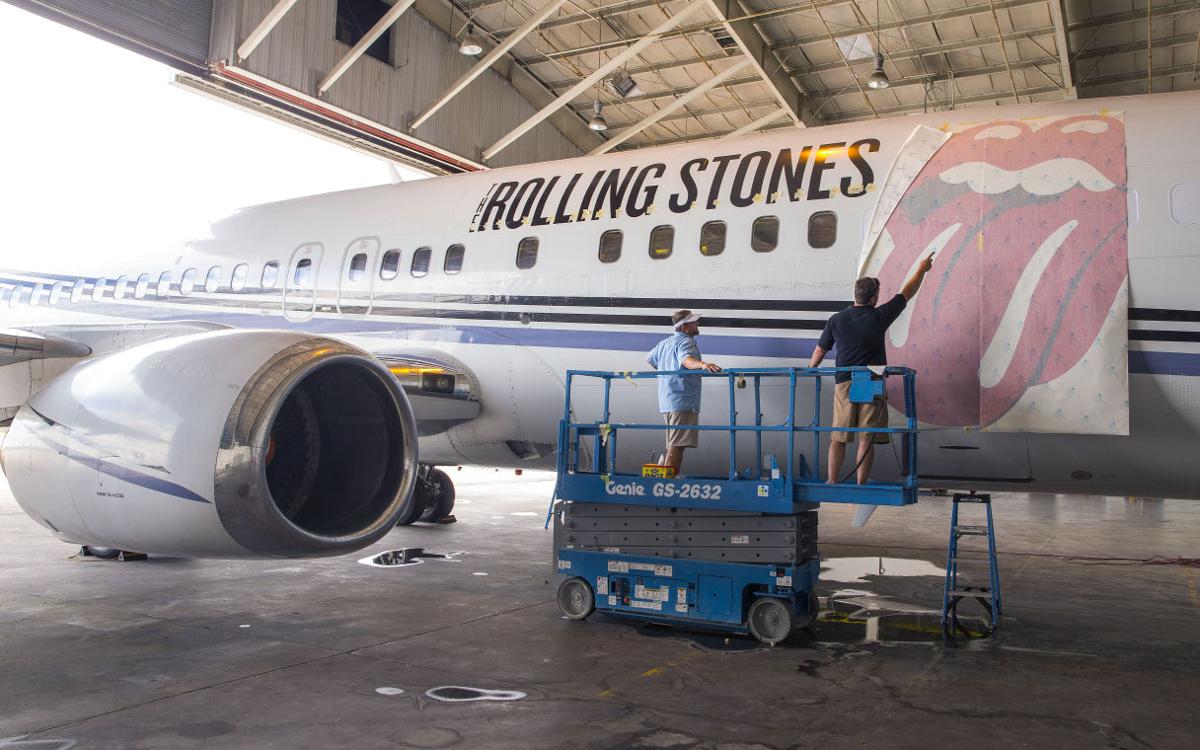 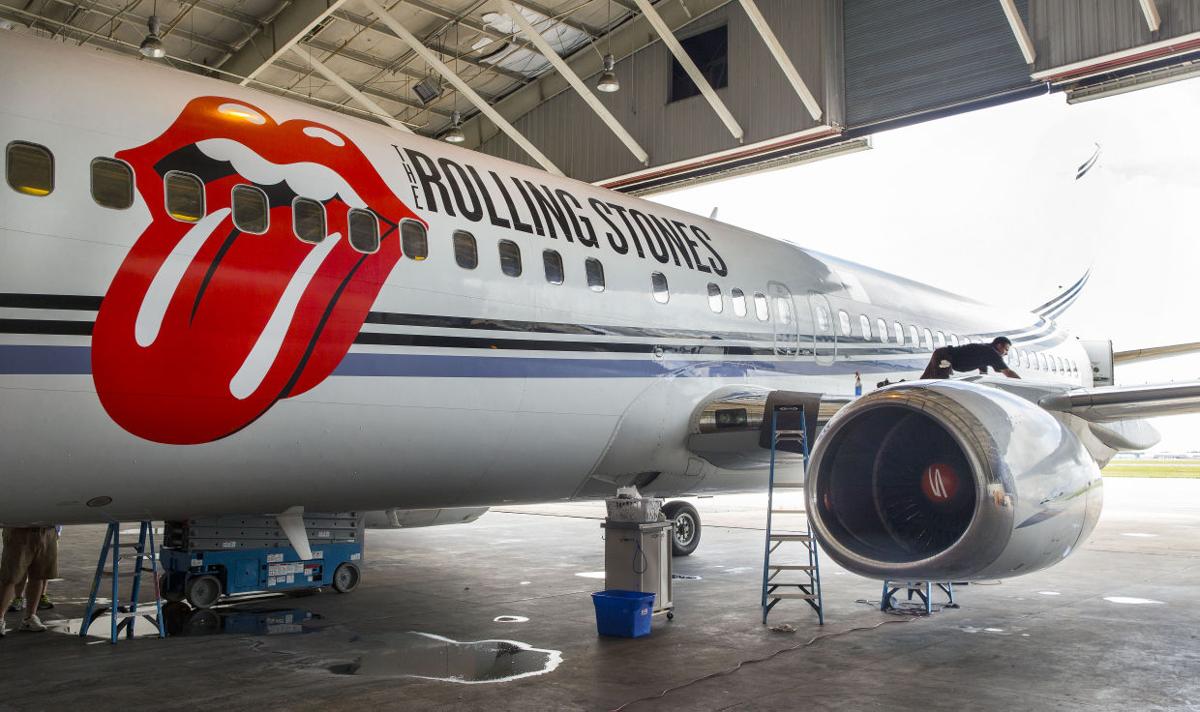 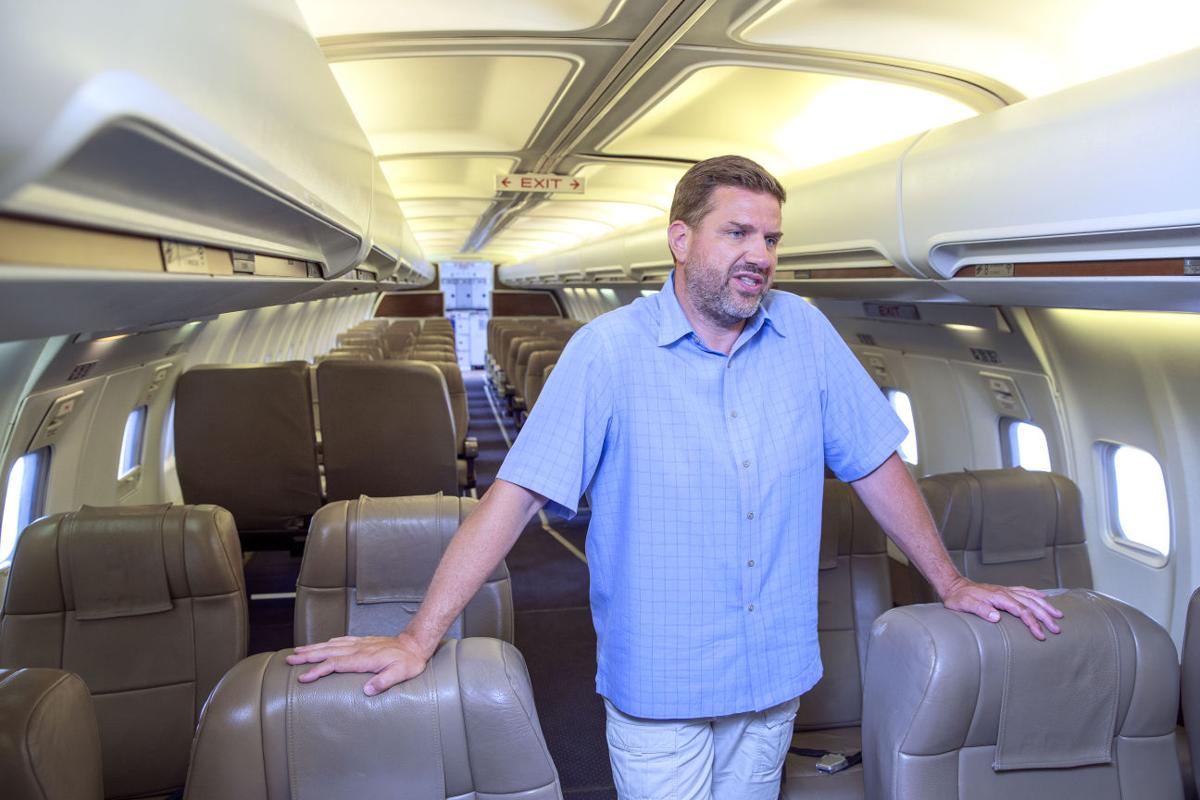 Boris Van Lier, chief operating officer at Swift Airlines, stands inside the Rolling Stones' 737 jet that is being leased from Swift Airlines for the rock band's North American tour.

Swift Airlines' 737 jet will carry the Rolling Stones across the US.

Crew from Solo Graphic install the Rolling Stones' logo on a 737 jet.

Boris Van Lier, chief operating officer at Swift Airlines, stands inside the Rolling Stones' 737 jet that is being leased from Swift Airlines for the rock band's North American tour.

The Phoenix-based company’s operations center is at Piedmont Triad International Airport, where it maintains the nine planes it uses for those contracts and leisure flights.

Inside, the plane was filled with comfortable brown-leather seats suitable for the Morgan Stanley board of directors.

But my inner adolescent beamed when I saw the white exterior plastered with the 10-foot crimson lips and tongue logo that has defined the Stones for 45 years.

I pictured a stoned Keith Richards wobbling down the steps with shades and some kind of fur coat on a lost 1970s tour.

Now, the only 70s that apply to the Stones are their ages: Mick and Keith are both 71.

No more wandering the aisle drinking from Jack Daniel’s bottles.

This plane is a good place to soothe the band’s sore joints as they tour the country.

I know. I sat in Mick’s favorite seat and the memory foam nearly put me to sleep.

The four band members sit in the cozy compartment in the front of the plane — more like the first-class cabin of an airliner — with big, soft seats and attentive service.

The support musicians and roadies sit behind the partition, but the Stones are known for mingling.

Swift Air spends fall, winter and spring flying major sports teams: the Chicago Bulls, the Boston Celtics, the Carolina Hurricanes and the Boston Bruins among others.

In the summer, Swift Air’s crews at PTI tear down the seating arrangement used for sports teams and reconfigure it for music tours.

Other celebrities have flown in this plane.

John McCain and Sarah Palin used it during their 2008 presidential campaign.

And Miley Cyrus used it like a pop star. “They had a total blast,” van Lier said. “They partied a lot in the aircraft.”

Swift Air works from a hangar once occupied by Tradewinds airlines.

The growing company employs 25 part-time mechanics who service one plane a week in the company’s fleet, van Lier said.

Later this year, the company expects to add a plane that will haul cargo, a new type of business.

Around the country, the company employs 48 pilots, 60 flight attendants and 30 technicians who travel with every flight.

By late afternoon, technicians with Lafayette, La.-based Solo Graphix were almost finished with the painstaking job of gluing the giant tongue logo onto the plane.

The Stones logo was a rush job for the company, so owner Roger Stakes and his son created and brought two sets to guard against errors.

On the outside, it looked like the glory days of rock ’n’ roll excess.

On the inside, those leather chairs looked very appealing.

As I sank into Mick’s chair, I wondered why my heroes have become so staid.

And there was one more thing.

A table sat in front of me.

“They like that table for all their paperwork,” said Scott Awbrey, the plane’s flight mechanic.

That’s not how I pictured Mick Jagger unwinding.

Data shows one staff member and four children had tested positive for COVID-19, according to a report from the N.C. Department of Health and Human Services. The report does not include the dates of cases.

'I will miss the customers most': Reedy Fork Diner closes after 52 years of serving up country cooking and friendships

The diner was a popular gathering place for the Browns Summit community.

National legal observers said Wednesday that the court appears open to overturning all or part of the landmark Roe v. Wade decision from 1973.

NBC News reported that a spokesperson for Netflix confirmed that Jacqueline Avant was shot and killed. Her son-in-law, Ted Sarandos, is Netflix's CEO.