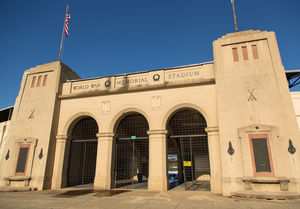 GREENSBORO — N.C. A&T waited years to get hold of War Memorial Stadium, and now it will take several more years for the university to complete repairs to its new ballpark.

University officials told A&T trustees on Friday of their plans for overhauling the 89-year-old stadium.

The university and city will spend $4 million to renovate the 89-year-old stadium.

A&T and the city announced a deal in March that would transfer ownership of the city’s former minor league ballpark to A&T.

“We want to make sure this facility comes back to its full glory of 1926,” said Andrew Perkins, the university’s associate vice chancellor for facilities and engineering. “We believe we can bring all of that up over time.”

The deal gave A&T 14 acres northwest of campus. The property includes eight tennis courts and a parking lot that the university already uses for commuter students.

The centerpiece of the deal is the stadium, home to A&T’s baseball team since the 1930s.

Greensboro says it has made its final offer to work with N.C. A&T on restoring complex.

A&T’s football team played there until Aggie Stadium opened on campus in 1981.

But time and neglect have taken their toll, and A&T officials say much of the stadium’s concrete is in poor shape.

That will leave the stadium with about 500 permanent seats and room for another 500 fans on the new berms.

The work — about $5 million to $6 million worth — will take five to six years to complete, Perkins said.

As part of the deal with the city, the city will contribute $1.5 million to the project. A&T will ask the General Assembly for $2 million in historic preservation money.

The university will use its own money and lease revenues to cover the rest.

Also at Friday’s board of trustees meeting:

• A&T introduced Tom Younce as the university’s interim police chief. Younce was police chief at N.C. State for 11 years before he retired in 2011. A&T is searching for a permanent replacement for former chief Glenn Newell, who retired Feb. 1.

• University officials said work to remove asbestos from the basement of the old Memorial Student Union will take place in May. The building will be demolished in July or August. A&T will build its new $90 million student center on the site of the old one.

• A&T said a temporary dining space dubbed the “Aggie Dome” is about 85 percent complete and will be ready when the fall semester starts in August. The temporary unit replaces the fast-food restaurants formerly located in the student union.

• Trustees voted to close the Center for Cooperative Systems, which studied robotic systems and remote sensors. However, the center hasn’t received outside funding since 2007, and its director left A&T in 2008. A recent review by the UNC system flagged the center for closure because of its lack of funding.