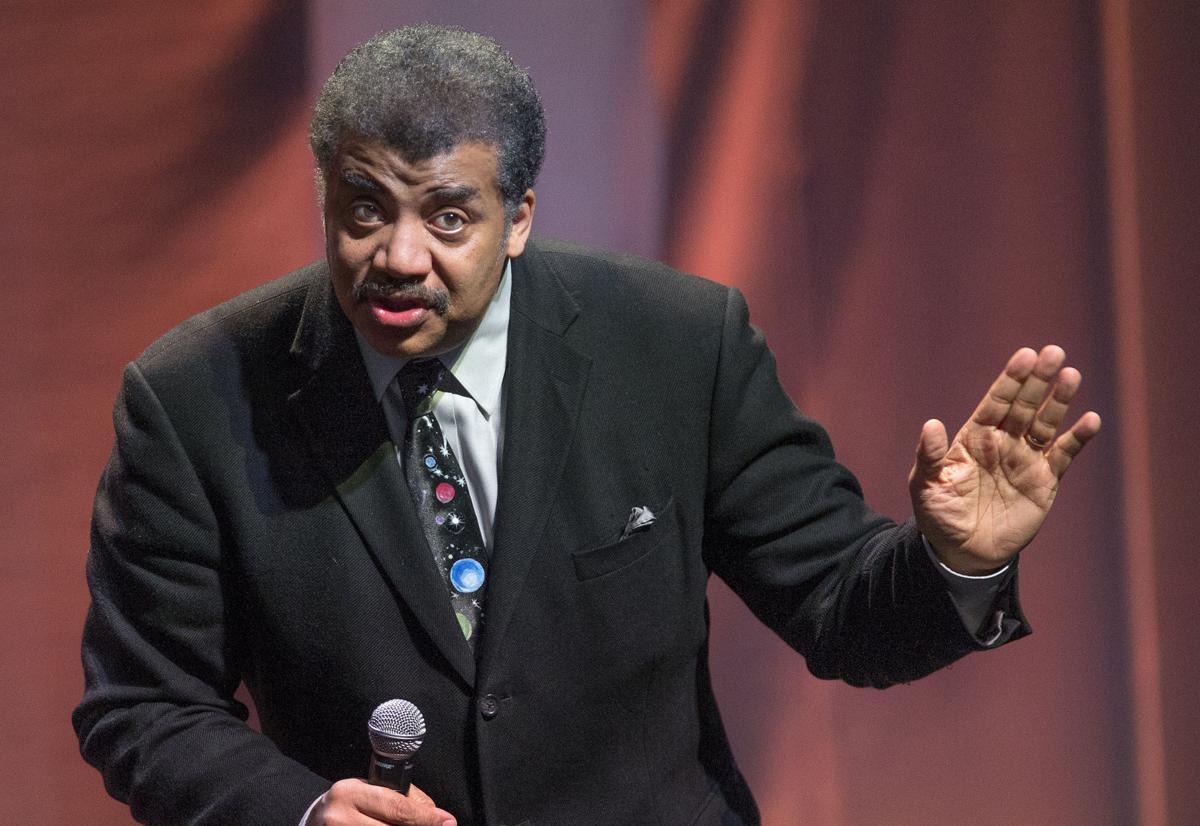 Neil deGrasse Tyson, an astrophysicist and the director of the Hayden Planetarium in New York, speaks Tuesday at the Greensboro Coliseum as part of Guilford College’s Bryan Series. 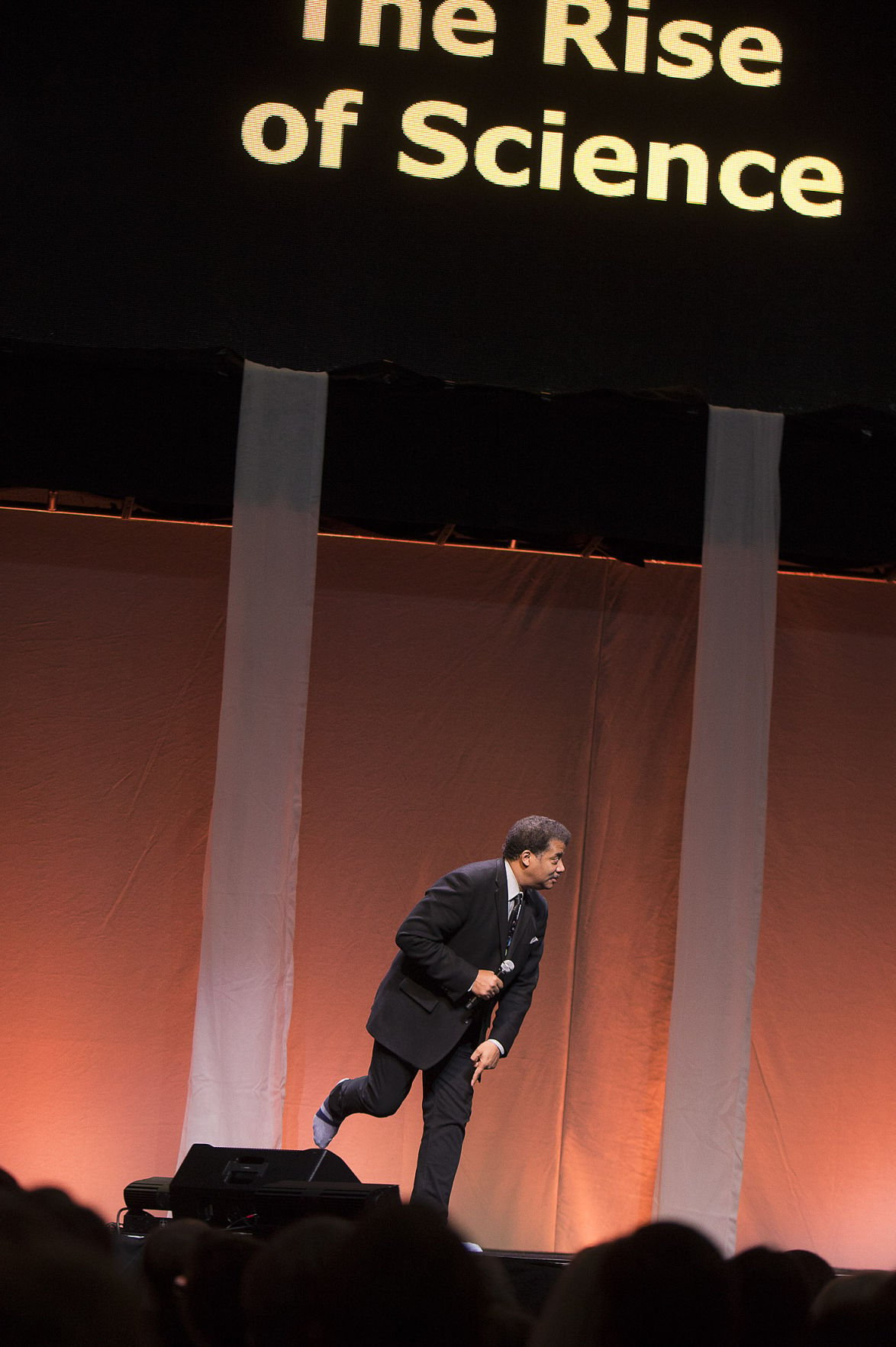 Neil deGrasse Tyson, astrophysicist and director of the Hayden Planetarium in New York, speaks on "Adventures in Science Literacy" Tuesday, Jan. 31, 2017, as part of the Guilford College Bryan Series lecture at the Greensboro Coliseum in Greensboro, N.C.

GREENSBORO — The United States has plenty of challenges in front of it these days.

The issue of greatest concern to perhaps one of the nation’s most well-known scientists, Neil deGrasse Tyson: Americans know far too little about science.

Americans overall are bad at science. Scared of math. Poor at physics and engineering. Resistant to evolution. This science illiteracy, Tyson told a nearly sold-out crowd at the Greensboro Coliseum on Tuesday night, is a threat to the nation.

“The consequence of that is that you breed a generation of people who do not know what science is nor how and why it works,” he said. “You have mortgaged the future financial security of your nation. Innovations in science and technology are the (basis) of tomorrow’s economy.”

Tyson, the director of the Hayden Planetarium in New York, author of 10 books and star of TV and radio shows about science, was the guest of the Guilford College Bryan Series. Almost 3,400 people turned out to hear Tyson speak for nearly two hours about science and science literacy.

America’s decline isn’t unprecedented, Tyson said. Just look back 1,000 years ago at the Middle East, where math and science flourished in Baghdad. Algebra and algorithms were invented in the Middle East. So were Arabic numerals — the numbers we still use today.

But when a new cleric emerged during the 12th century, he declared math and science to be earthly pursuits, Tyson said, and good Muslims should be concerned about spiritual affairs. The scientists drifted away, and scientific literacy faded from that part of the world. Of 655 Nobel Prizes awarded in the sciences since 1900, Tyson said, only three have been awarded to Muslims.

“Things that seem harmless can have devastating effects,” he said.

Europe dominated science in the centuries that followed. You can see its influence today, Tyson said. Just look at currency: European paper money has carried the pictures of famous scientists. The former German currency bore the picture of the mathematician Carl Friedrich Gauss and his most famous contribution, the bell curve.

“It is a not-so-subtle message from the government that math matters,” Tyson said. “If it’s on your currency, it is part of your culture. You think it. You feel it. Whether or not you’re a scientist or a mathematician, you’re not going to be the person to stand in their way when they’re trying to get math and science done.”

The United States had its own scientific golden age in the last half of the 20th century. The space race and the Cold War drove scientific invention. Popular culture was full of flying cars, monorails, cities of tomorrow and world fairs that celebrated progress and invention.

“You didn’t need special programs to try to convince people that they should like science,” Tyson said. “It was already writ large in headlines. You don’t do that without science, technology, engineering and math. And everybody knew it.”

Today, Tyson said, too many Americans mistake clouds for UFOs, believe in alien abductions, reject evolution (known to scientists as the foundation of biology), fear the number 13 and negative numbers, and freak out about supermoons that really aren’t any bigger than regular old full moons.

But, he said, let’s say he’s the chief executive officer of a corporation that’s looking for a site for its headquarters.

“It’s not going to be in your state,” Tyson said. “The future companies need science literacy for their R&D, for advancements, for innovation. And so your state will fade among the 50. That’s a consequence.”

Here are the final two speakers in the 2016-17 season of the Guilford College Bryan Series:

All lectures will be held at the Greensboro Coliseum. For times, ticket information and other details, visit www.guilford.edu/bryan-series.

'It was a murder in the full light of day': Biden

The season will open in September with a speaker to be announced next month.

Joe and Jill Biden to speak in Bryan Series in September

The 2017-18 season kicks off Sept. 17 when former Vice President Joe Biden and Jill Biden come to the Greensboro Coliseum.

Joe Biden: ‘We are by far the greatest, powerful, decent nation in the world’

Joe and Jill Biden open the 2017-18 season of the Guilford College Bryan Series.

Many European nations have recognized scientists by putting them on their currency. The United States? Not so much.

Neil DeGrasse Tyson will speak as part of the Bryan Series

When Neil deGrasse Tyson speaks about how he came to love the stars growing up in New York City, he wonders how things could have been different.

The journalist, professor and best-selling author addresses a crowd of about 3,000 at the Greensboro Coliseum

The Guilford College Bryan Series lecture brought Neil deGrasse Tyson, astrophysicist and director of the Hayden Planetarium in New York to to…

State Rep. Pricey Harrison (D-Guilford) calls for an independent investigation to determine whether the McCrory administration improperly sought to muffle the toxicologist.

Newly released research from N.C. State shows no trace of coal ash in soils or crops along a 57-mile stretch.

Duke plant in Belews Creek ranked as a high priority for closure.

Neil deGrasse Tyson, an astrophysicist and the director of the Hayden Planetarium in New York, speaks Tuesday at the Greensboro Coliseum as part of Guilford College’s Bryan Series.

Neil deGrasse Tyson, astrophysicist and director of the Hayden Planetarium in New York, speaks on "Adventures in Science Literacy" Tuesday, Jan. 31, 2017, as part of the Guilford College Bryan Series lecture at the Greensboro Coliseum in Greensboro, N.C.