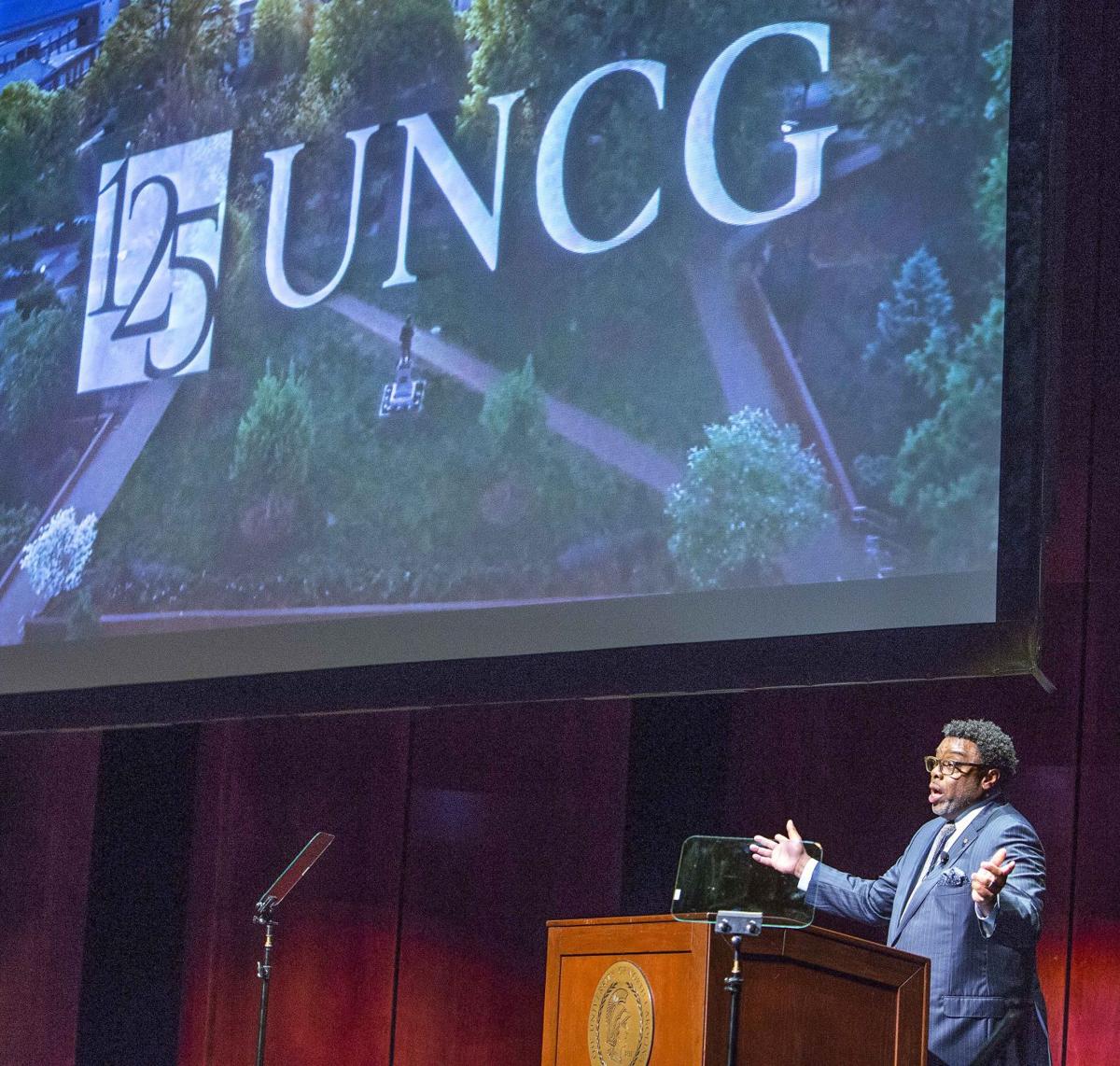 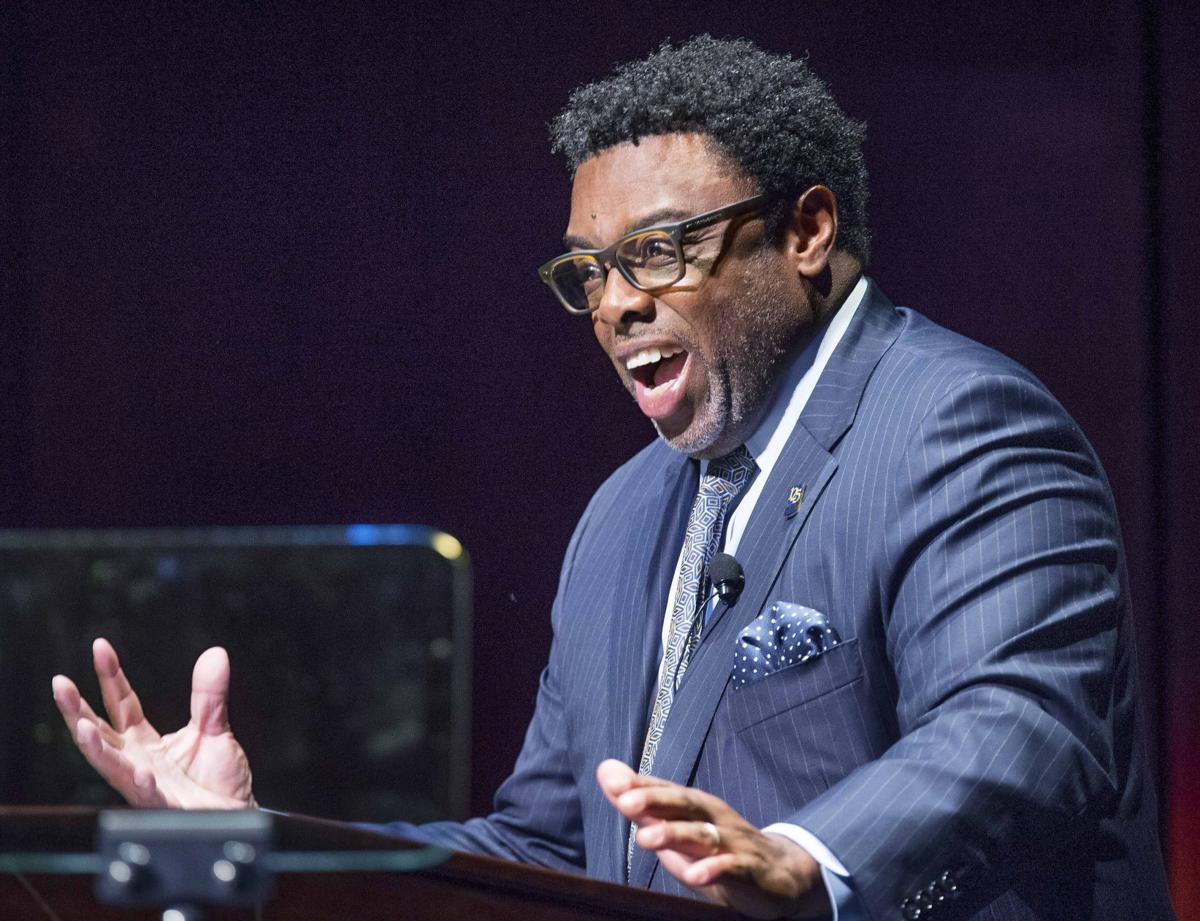 UNCG Chancellor Franklin Gilliam delivers his annual back-to-campus address with a theme of the university taking giant steps in Greensboro, NC on August 8, 2017.

The university recently did surveys that found that people familiar with the university hold it in high regard. People who know little about UNCG? They don’t think much of it.

Chancellor Frank Gilliam on Tuesday told UNCG employees that he sometimes meets people who think the university has somewhere around 7,000 students.

This fall, UNCG expects enrollment to rise about 3.5 percent — which would push the university over 20,000.

UNCG needs to do a better job of telling its own story, Gilliam said, and must continue to take giant steps in academics, research and community outreach.

“When people talk about the top public institutions in this region, we need to be in that conversation ... ” Gilliam said. “We haven’t been. We deserve to be front and center.”

Gilliam’s remarks came at the annual State of the Campus address, held a week before the start of the fall semester. It was the first university-wide event held at UNCG Auditorium since April, when a fire destroyed a stage curtain and damaged lights and other equipment.

In a 30-minute speech, Gilliam ticked off some giant steps UNCG had made over the last year. These included national recognition for improving graduation rates of low-income and minority students; a new co-admission arrangement with two area community colleges announced last week; and conference championships for several UNCG sports teams.

UNCG also got permission to set up two millennial districts — private-sector partnerships in arts and entertainment and health and wellness — on its campus. And one of its graduates, runner Paul Chelimo, won a silver medal at the Summer Olympics.

Gilliam’s “giant steps” reference came from his speech a year ago, when he alluded to the title of a John Coltrane jazz album. In this year’s address, Gilliam gave a nod to Coltrane’s follow-up album, “Ascension.”

To ascend in the coming years, Gilliam said UNCG will have to strengthen academics, improve graduation rates, increase enrollment and research grants, raise more money from alumni and friends, and make the university more visible so more people know about it.

Gilliam didn’t say specifically how UNCG will do these things. A new university strategic plan to be released within the month should have more details.

UNCG’s role in the region can’t be overstated, Gilliam said. Some 33,000 UNCG graduates live within 25 miles of campus. Another 42,000 live within 100 miles. Many are nurses, teachers, artists, small business owners and local elected officials.

The university and surrounding communities, he added, share the same fate.

“We’ve got to step into the spotlight,” Gilliam said. “We have to ascend.”

Here’s the first day of fall semester classes at area colleges and universities:

Enrollment is up for the fourth straight year at the Triad's largest four-year university.

The university will note Founders Day with a 125-foot-long sheet cake and a Rhiannon Giddens concert.

Local colleges and universities are putting up significant new buildings at what seems to be a record clip.

Both small ponds on campus are full of water — and attracting a variety of animals — thanks to heavy rains since March.

UNCG Chancellor Franklin Gilliam delivers his annual back-to-campus address with a theme of the university taking giant steps in Greensboro, NC on August 8, 2017.