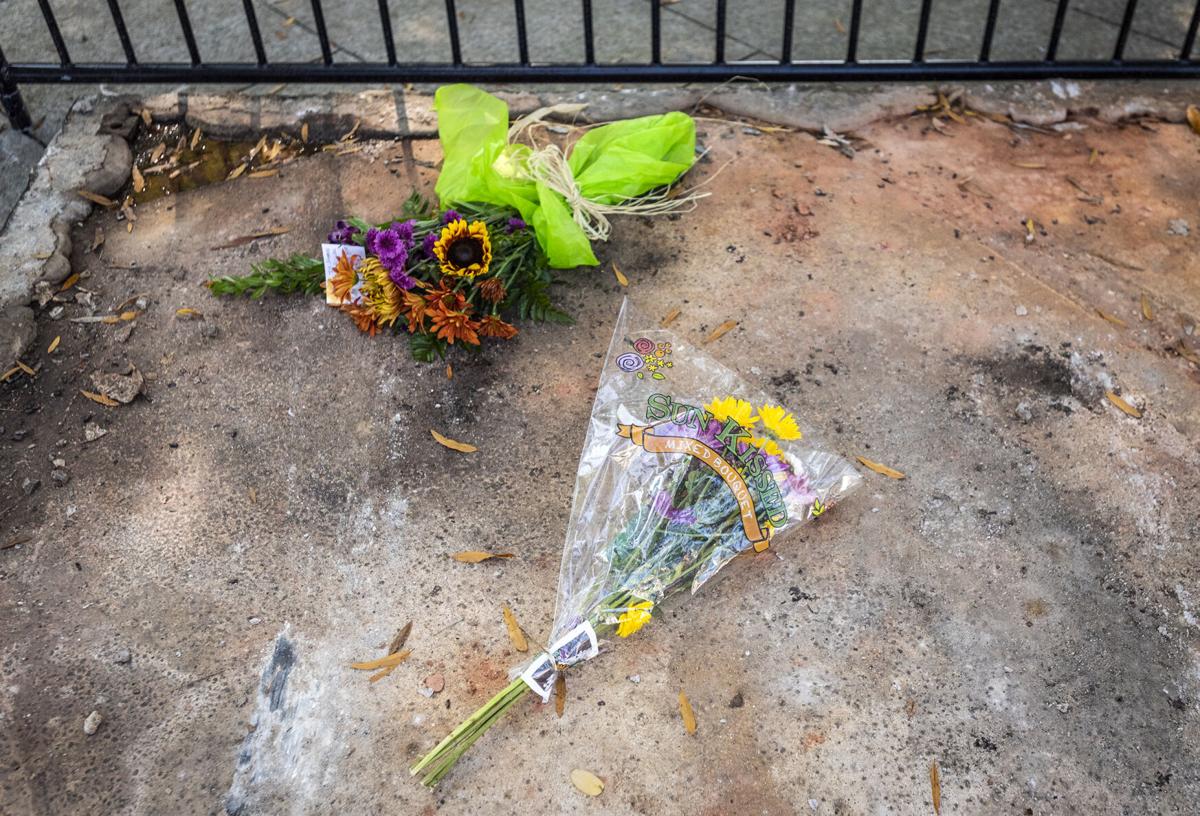 Flowers lie on a pedestal that held a Confederate monument in Lexington, N.C. for 115 years before it was removed Oct. 15, 2020. 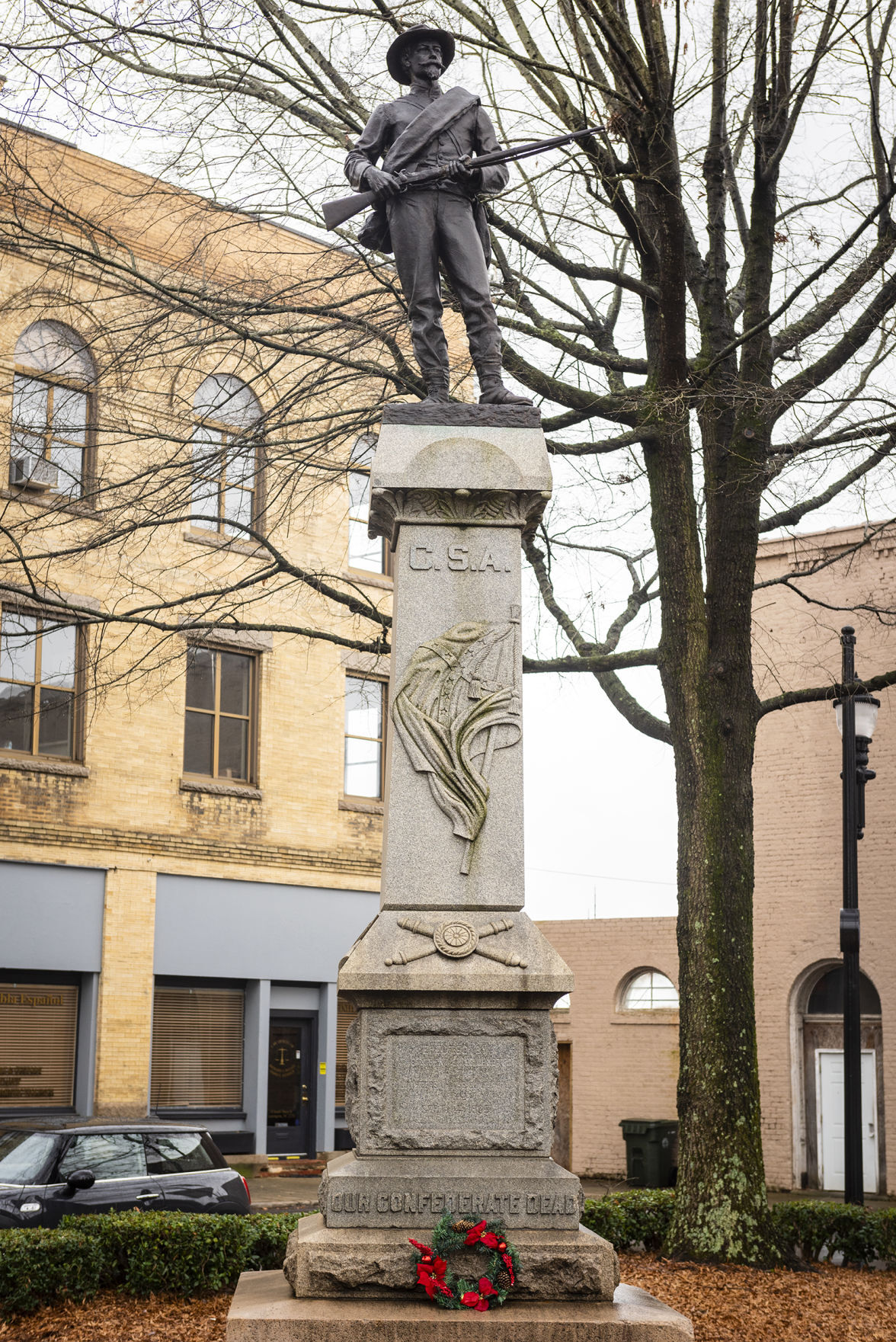 This Confederate monument stood in the heart of Lexington’s downtown since 1905. It was removed sometime overnight between Oct. 15-16, 2020. Twenty-four Confederate symbols were taken down last year in North Carolina, second only to Virginia, which removed 71 memorials.

ELON — Nearly 60% of North Carolina residents say they prefer that Confederate monuments remain right where they are, according to a new Elon University Poll.

The survey, published Thursday, also found that a growing number of people want these statues and memorials removed from public spaces.

The new Elon Poll of nearly 1,400 N.C. residents found that 58% want Confederate monuments to stay in public spaces. Another 42% want them removed.

In November 2019, when the Elon Poll asked the same question, 65% wanted these monuments to remain while 35% favored removal.

Jason Husser, the director of the Elon Poll and an associate professor of political science at Elon, characterized the seven-point swing in a news release as "only a modest shift in North Carolinians' attitudes."

The new poll found increased polarization and wide demographic divides on the issue.

A growing number of North Carolina residents said removing Confederate from public property either helps and hurts race relations. (The percentage who said it helped grew from 24.6% in 2019 to 28.4% in Thursday's poll; those who said it hurt increased from 35.5% to 39.4%.)

The killing of George Floyd in Minneapolis in 2020 made 31.5% of those surveyed more likely to support getting rid of Confederate monuments. Another 16.7% said his death made them less inclined to favor their removal. Slightly more than half said Floyd's death made no difference to their stance on Confederate memorials in public places.

Though a majority of N.C. residents say Confederate memorials should remain in public spaces, 94 of these statues were taken down across the country in 2020. That's almost twice the number removed in the five previous years, according to a Southern Poverty Law Center report that came out in February.

Twenty-four Confederate symbols were taken down in 2020 in North Carolina. That was second only to Virginia, which removed 71 statues, busts, markers, street names, school names and other Confederate memorials.

Among the Confederate symbols removed in North Carolina in 2020 were statues in Raleigh, Charlotte, Wilmington, Greenville, Fayetteville and Rocky Mount.

More North Carolinians want the COVID-19 vaccine, but a fifth of people still say no

"We're not seeing any erosion to speak of in the people who are saying, 'No, don't intend to take the vaccine,'" said Jason Husser, director of the Elon Poll.

Lexington removed a Confederate statue to ease conflicts over it. But tensions remain.

The Confederate monument that has stood in downtown Lexington for 115 years was removed late Thursday.

Though he hasn’t seen the statue since it was knocked down, a spokesperson for the Sons of Confederate Veterans said he has heard it is in storage and the damage is “pretty extensive.”

HPU Poll: In North Carolina, president's approval sits a little below 50%, while governor's approval is just above 50%

The disapproval ratings for both President Joe Biden and Gov. Roy Cooper remain far below their job approval marks.

Flowers lie on a pedestal that held a Confederate monument in Lexington, N.C. for 115 years before it was removed Oct. 15, 2020.

This Confederate monument stood in the heart of Lexington’s downtown since 1905. It was removed sometime overnight between Oct. 15-16, 2020. Twenty-four Confederate symbols were taken down last year in North Carolina, second only to Virginia, which removed 71 memorials.