Black bears are becoming more common in N.C. Here's how to live with them in peace.
0 Comments
Share this
{{featured_button_text}}
1 of 2 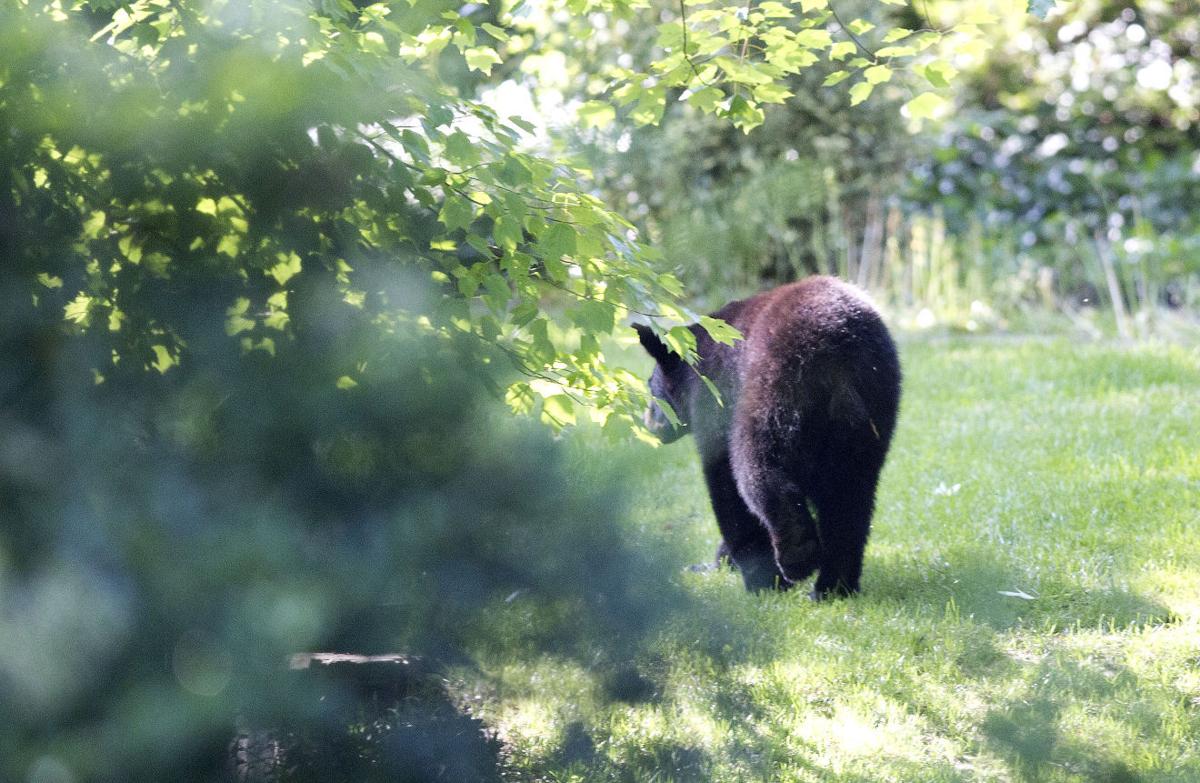 In this May 2016 photo, a black bear moves through a yard on West Lake Street in Greensboro. 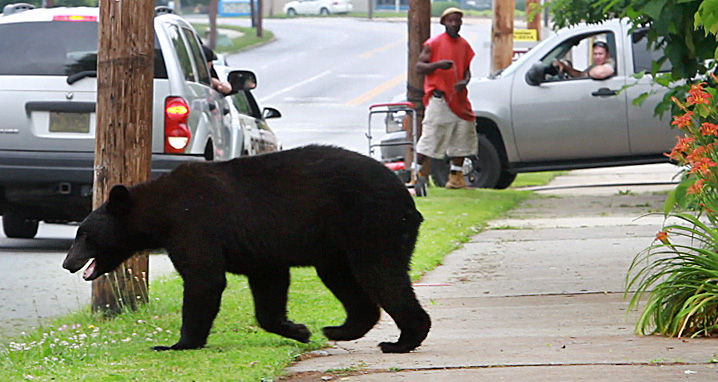 In this May 2011 photo, a black bear surprises a man mowing grass along Summit Avenue as it crosses the road Sunday between Yanceyville Street and Charter Place. Monitoring the bear are Officer W.T. Kennedy and Sgt. Cameron Ingram (in the vehicles) of the Wildlife Resources Commission.

RALEIGH — Your chances of encountering a bear in North Carolina are as great as they’ve ever been.

Black bears once were found anywhere there were forests in North Carolina, which is to say nearly across the entire state. Their numbers began to decline in the early 1900s, because of hunting and loss of habitat and sources of food; by the 1970s bears were found only in the most remote areas of the mountains or in swampy places on the coastal plain.

Today, bears are found in 60% of North Carolina’s land area and sightings in the Piedmont become more common every year. That’s especially true in May, June and July, when young bears strike out on their own, looking for a new home.

Bears have been sighted in places such as North Raleigh and Garner in recent years. In early April, a tow truck driver posted photos of a bear that had been hit by an SUV on the Durham Freeway near Research Triangle Park. Some bears are quite comfortable in urban areas; just ask residents of Asheville, where encounters with bears have become common.

There are an estimated 20,000 black bears in North Carolina, according to state Wildlife Resources Commission biologist Ashley Hobbs, up from a few hundred in the 1970s. Of course, there are more humans as well — more than 10.6 million state residents at last estimate — so it’s not surprising that people and bears are meeting up more often.

Bear biologists at the Wildlife Resources Commission and its counterparts in other southeastern states have created a website called BearWise to help people live responsibly with bears. Here’s some advice on peacefully coexisting with the bruins in our midst:

If you’re hiking in the woods, keep an eye out for bears. If you’re passing through heavy brush, make noise so a bear knows you’re coming and won’t get startled. When hiking in a group, stick together and keep kids close.

Keep your dog on a leash. You may have enough sense not to startle or run after a bear, but your dog probably doesn’t. Don’t let your dog pick a fight for you.

Keep your distance. Black bears are generally shy and try to avoid people. But they will defend themselves and their cubs if you get too close.

If a bear wanders into your yard or campsite, give it room and a route to leave by. Don’t corner it. If you want it to move on, make some noise or shout from a safe distance. The bear should get the message.

If you encounter a bear in the woods, don’t panic. And don’t run; that may prompt the bear to chase you. Simply stand still or, if the bear has noticed you, move away quietly.

If a bear does approach, stand your ground. Again, don’t run. Make yourself appear big and menacing by lifting your arms and your jacket and shout. (The BearWise biologists suggest shouting “Hey, bear,” but it probably doesn’t matter what you say, only that it’s loud and lets the bear know you mean business.)

In the unlikely event of a black bear attack, spray the animal with bear spray, if you have it, or fight back with whatever you’ve got. Do not play dead.

Don’t feed bears, intentionally or otherwise. Feeding bears will help them feel comfortable and bring them back for more. Bears are attracted by food and what smells like food, including garbage, recycling and compost. Keep garbage and recycling in cans or containers with secure lids and store them inside if possible.

When camping, don’t store food in your tent. Lock it in your car, with the windows closed, or keep it in a bear-resistant container or hung in a tree 100 yards from where you’re sleeping.

Take down bird feeders and don’t feed pets outdoors when bears are active. Bird food and leftover kibble will attract bears. Birdseed and hummingbird solution in particular are high in calories that bears crave.

Clean and put away your grill. The greasy bits left on a grill and in the drip tray will lure bears. Remove what you can and store the grill where a bear can’t get at it.

For more information about bears and bear safety, go to bearwise.org.

Meet one of Morocco's meteorite hunters

Meet one of Morocco's meteorite hunters

Jun. 21—A fire tore through a massive Outer Banks home on Father's Day, leaving dozens displaced in the popular tourist destination, officials said. Facebook user Sheila Foster Davies said it was about 4 a.m. Sunday when she woke up to someone pounding at her door and telling her to evacuate. Video she posted online shows flames leaping from a nearby home in Kill Devil Hills, North Carolina. ...

A woman was shot in the face in a road rage shooting in Lincoln County on Sunday morning, the county’s sheriff’s office said in a statement.

For the third time in less than a decade, a 41-year-old Belmont woman pleaded guilty to stealing from her employer.

A 16-year-old girl on a backpacking trip with her family was attacked in the middle of the night while sleeping in a hammock on the Tennessee side of the Great Smoky Mountains National Park.

Properties could be developed with rental and for-sale homes, including apartments or townhouses. But Charlotte doesn't want to limit developers' "creativity" as it seeks proposals, said Pam Wideman, Charlotte's housing and neighborhood services director.

A student passenger is in critical condition after she and other occupants of a driver's education vehicle were injured in a six-car collision in Newton on Wednesday afternoon.

Some 182,000 households in North Carolina are behind on rent with an average debt of $2,700, according to an analysis of U.S. Census May survey data from the National Equity Atlas, which studies the social equity of states and regions.

Family, students, administrators and others gathered at Fred T. Foard High School for a prayer service Thursday afternoon for two students and a teacher injured in a car crash in Newton on Wednesday.

In this May 2016 photo, a black bear moves through a yard on West Lake Street in Greensboro.

In this May 2011 photo, a black bear surprises a man mowing grass along Summit Avenue as it crosses the road Sunday between Yanceyville Street and Charter Place. Monitoring the bear are Officer W.T. Kennedy and Sgt. Cameron Ingram (in the vehicles) of the Wildlife Resources Commission.