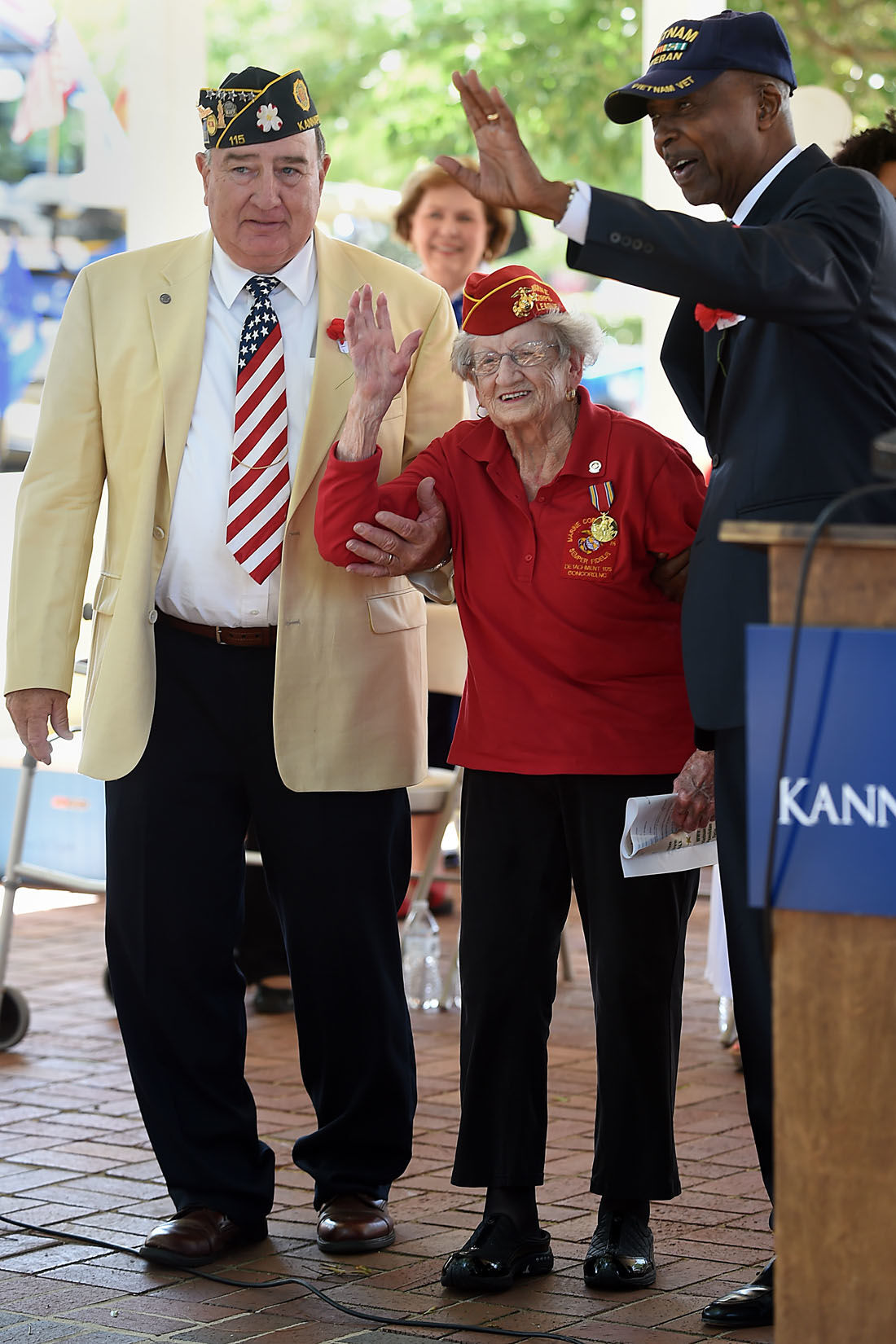 Dorothy Cole, center, acknowledge the crowd as she is recognized during a Memorial Day Ceremony in 2019 at Veterans Park in Kannapolis. 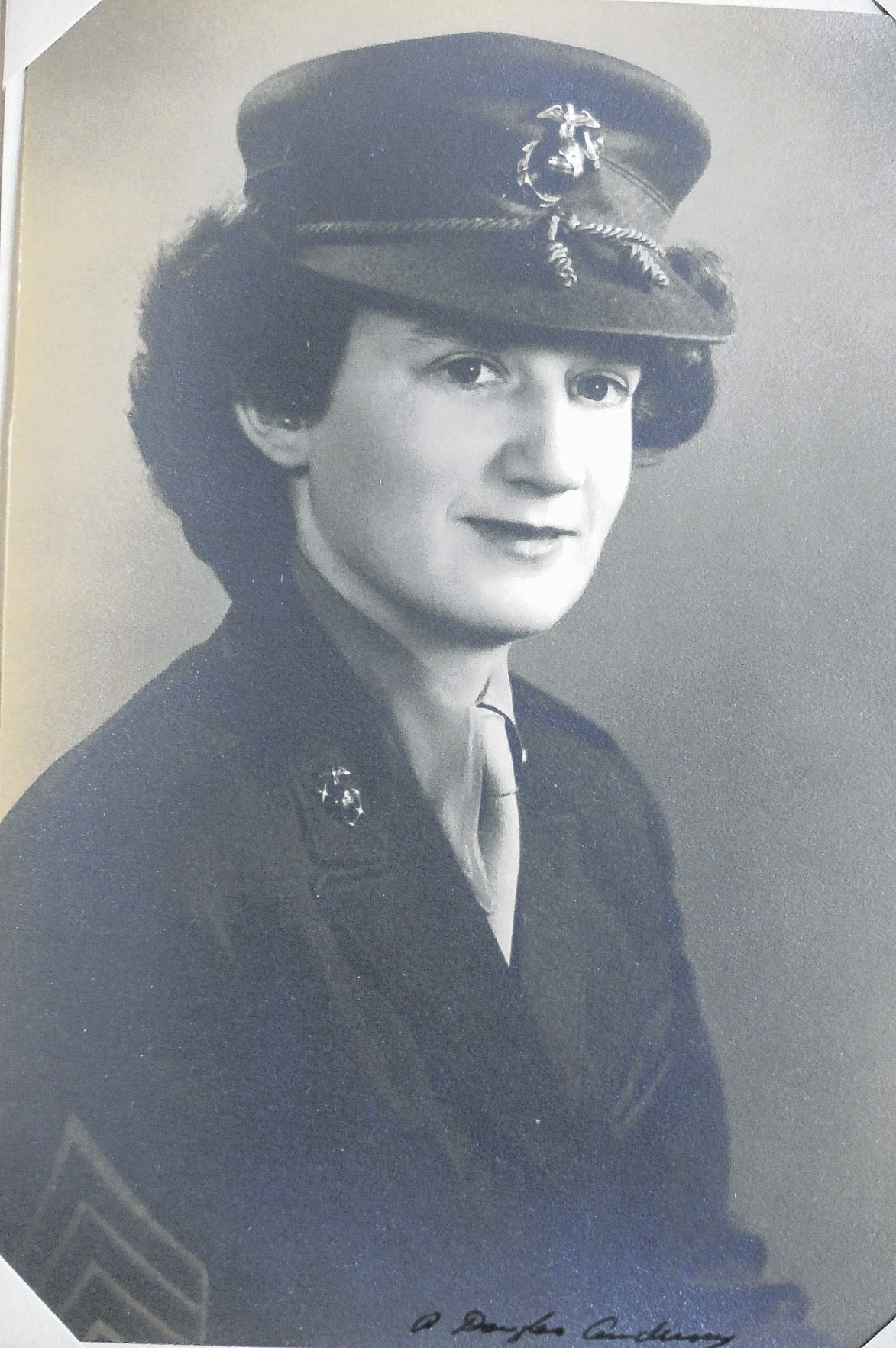 Dorothy "Dot" Cole, who enlisted as one of the earliest female Marine reservists in response to the 1941 bombing of Pearl Harbor and was widely celebrated around her birthday in September as the country's oldest living Marine, died of a heart attack last week at her daughter's home in Kannapolis. She was 107.

Her death was confirmed by her only child, Beth Kluttz, 67, who had moved her mother into her home almost 20 years ago.

Cole (who at the time was still named Dorothy Schmidt, having not yet been married) was 28 years old when she boarded a bus in her hometown of Warren, Pennsylvania, for the 150-mile trip to Pittsburgh, where she hoped to volunteer for the Navy.

When she tried to enlist, however, the recruiter informed her that, at just 4 feet, 11 inches, she wasn't tall enough to meet Navy standards. Kluttz, in fact, says her mother's longtime nickname was "Half-Pint."

So she eventually came up with another plan after returning to Warren: She would learn to become a pilot, and persuade the Marine Corps to let her fly an airplane.

It was the longest of long shots. From 1918 to 1942, enlisted female Marines had only been allowed to perform clerical duties.

But in July 1942, with the conflict overseas intensifying, President Franklin D. Roosevelt signed the Marine Corps Women's Reserve into law, to fill the gaps — left by men headed to combat — in administrative, training and supply positions at its bases.

The Corps delayed formation of the branch until February 1943; Cole enlisted five months later, on July 12, 1943, at 29 years old, becoming one of the earliest volunteers for the branch.

By that point, she had logged about 200 hours in the cockpit of a Piper Cub and earned her private pilot's license.

It would not be enough to sway the Marines, though. After Cole completed the six weeks of boot camp with the Women's Reserve's First Battalion on the beaches of Camp Lejeune near Jacksonville, North Carolina, "They put me behind a typewriter instead of an airplane," Cole told the Independent Tribune of Concord during an interview pegged to her 107th birthday in September.

Still, "I loved the hats we were wearing," Cole told the Marine Corps Times, also in September. "It was fun when I got the first complete Marine outfit. I loved it very much and felt right at home with it."

Cole went on to spend her two years of service stationed at a firing range in Quantico, Virginia, with the majority of her responsibilities centering on typing up correspondence for officers.

"It was kind of a tough time and we were not welcomed too well by many of the men in the service," Cole recalled in the Marine Corps Times interview.

From East Coast to West, and back

Cole was born on Sept. 19, 1913, in Warren, a small city near the border of New York state that sits on the banks of the Allegheny River.

Hers was an active childhood. In addition to frequenting the Kalbfus Rod & Gun Club in the neighboring borough of Clarendon with her father and brother, she ran track and played basketball and hockey at Warren High; she graduated from the school in 1932.

Before enlisting, she had worked as a secretary for the YWCA.

She met her future husband — the much taller (at 6-foot-2) Wiley Cole — in Washington, D.C., while both were in the service. Wiley was in the Navy, and served on the USS Hornet, an aircraft carrier that sailed in both the Pacific Theater and the Solomon Islands campaign during World War II before eventually being torpedoed and sunk in October 1942.

The war ended in 1945, and Dorothy Cole was discharged that December as a sergeant in the Marines.

"We all left on a train," Cole said in her interview with the Independent Tribune, "and many of us ladies were singing."

After the war, she moved to San Francisco to be with Wiley. They got married, and both were hired at the Ames Research Center (which became a part of NASA in 1958) at Moffett Field in Silicon Valley, he as an aerial photographer and she as a secretary. They had their only child, daughter Beth, in 1953.

Beth Kluttz moved from California to North Carolina in 1976. Cole followed her to the area in about 1979.

Kluttz says her mother "was doing really good" into the 100th year of her life, and that up to about 102 or 103, "we could still go to Walmart and I could actually leave her alone and she'd go down her own way. And I can remember having a hard time finding her because she was so short, she was shorter than ... the clothes racks. ... So I had a hard time locating her and a lot of times it scared me trying to find her," Kluttz recalls, laughing.

Kluttz says her mother's health finally started to deteriorate after she turned 105.

As for how the family found out Cole was the oldest living Marine? Credit goes to Kluttz.

Around the time Cole was 103, Kluttz says she was tracking who the oldest female Marine was according to Google. A couple of years later, she says she was given the impression from some Marines based in Quantico that the answer might be her mom, "but at that point in time they couldn't ever really prove it."

"So I just put it out there through them that 'my mother as of this date is this age, and if anybody else is out there, please step forward' pretty much is what I did," Kluttz says. Then "I think some other Marines from the Marine Corps League, when she was getting ready to turn 107, they got in touch with headquarters up by the Pentagon there in Washington, and they were able to do the research, and they said, 'Not only is she the oldest female Marine, but she is actually the oldest Marine as of September 2020.'"

Cole was awarded lifetime membership in the Marine Corps League Cabarrus Detachment 1175 in September, and after the Independent Tribune published a story ahead of her birthday and the Marine Corps created a video in her honor, she became a minor celebrity.

Most of the Charlotte TV stations produced stories, but even national outlets — from Fox News and The New York Post to Southern Living magazine — acknowledged her 107th birthday and her "oldest living Marine" status.

And in the fall, Cole was able to perform one final act of civic responsibility: casting her ballot in the 2020 election at a drive-in voting location at the Kannapolis Train Depot. Cole had lived through 18 presidents, starting with Woodrow Wilson (and her earliest recollection of a president being Calvin Coolidge); in her first three opportunities to vote for a commander in chief — in 1932, 1936 and 1940 — she voted for Roosevelt.

Asked by the Marine Corps Times in September whether she felt like she and other women she entered the Marines with had played a role in shaping history or influencing current female Marines, Cole responded, simply: "I suppose."

It certainly has taken a long time, and it's been a slow evolution.

The Corps didn't wind up letting a woman fly a Marine aircraft until 1995.

In 2016, it finally opened ground combat jobs to women, and since then, enlisted female Marines have broken through several barriers: According to Military.com, in 2019, a woman became the first-ever female force reconnaissance Marine, and another was the first to complete the brutal second phase of Marine Corps Forces Special Operations Command's assessment and selection course.

Today, about 9% of the 185,000 Marines in the Corps are women. It is the lowest percentage of any military branch.

"I thought that it would impress the Marine Corps, but it didn't," Cole told the Marine Corps Times in September about all the flying she did. But "I just landed on my old typewriter.

"The girls now, they have an open field with what they can do," she said, "so it's gotten better."

Besides her daughter Beth, Cole is survived by two grandchildren and six great-grandchildren.

At least five employees, some with decades of experience within the Administrative Office of the Courts, are now gone, including McKinley Wooten, who was replaced by special Superior Court Judge Andrew Heath. The AOC's most recent deputy director, general counsel and a lobbyist at the legislature for the agency also are no longer reporting to work, according to Judicial Branch spokeswoman Sharon Gladwell.

The university said its investigation “did not substantiate any significant allegations.”

N.C. changes COVID vaccine eligibility, will offer it to everyone age 65 and older

Once elderly residents have gotten vaccinated, frontline essential workers will be prioritized next.

The first North Carolina municipalities are acting to expand LGBTQ rights again a month since the expiration of a moratorium on nondiscrimination ordinances agreed to years ago as a compromise to do away with the state's “bathroom bill.”

A bridge too far gone: Sunset Beach residents lament a life once spent in isolation

On the island today, there remains nostalgia for the modest but community-defining bridge.

Essential workers in N.C. will get COVID-19 vaccine priority. What does that mean?

RALEIGH — North Carolina Gov. Roy Cooper outlined an updated plan Wednesday for who gets the COVID-19 vaccine and when, prioritizing older adu…

Two wanted for murder after shooting at NC furniture business. Witness: One suspect worked at the shop.

Two Alexander County residents are wanted in connection with a shooting that left a woman dead at the furniture business TCS Designs on Wednesday afternoon.

Dozens arrested during riot at US Capitol. These suspects are from NC.

Data from the CDC ranks North Carolina as the 10th slowest state in the country per capita in administering doses.

Dorothy Cole, center, acknowledge the crowd as she is recognized during a Memorial Day Ceremony in 2019 at Veterans Park in Kannapolis.