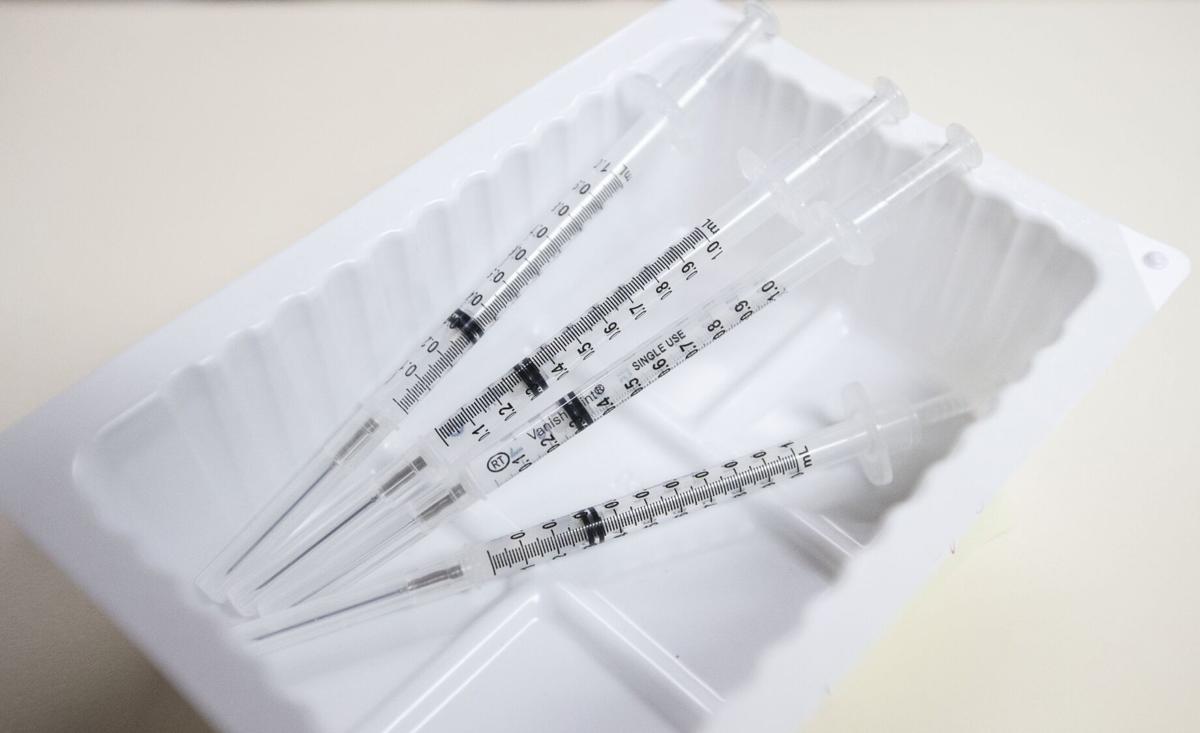 Syringes of COVID-19 vaccine sit at the ready for a June 17 clinic at the Davidson County Health Department in Lexington. Researches say “vaccine apathy” may be playing a role in why people aren’t getting a COVID-19 shot. 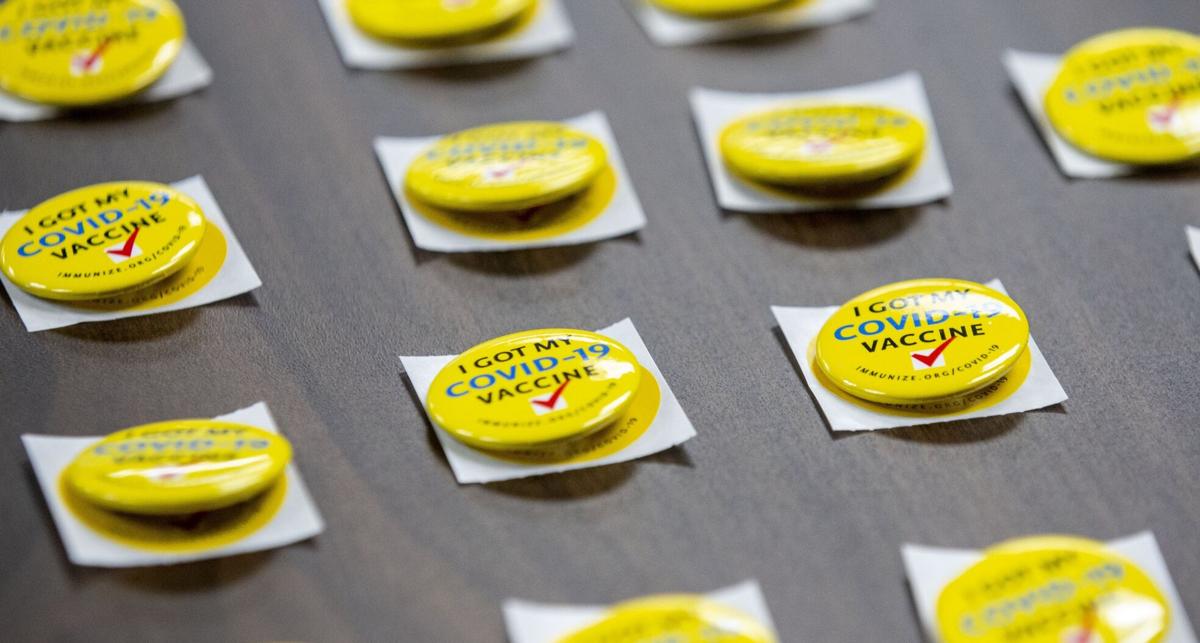 Badges and stickers were given out to people who got their COVID-19 vaccination June 17 at the Davidson County Health Department in Lexington. A February Pew survey of 10,121 people that found 30% indicated they probably or definitely will not be vaccinated. Of that total, 42% listed “Don’t think I need it” as a major reason for their decision.

Public-health officials — both locally and nationally — are trying to understand and respond to the potential that 30% to 35% of North Carolinians and Americans will decline to get any form of the COVID-19 vaccine.

Although vaccine hesitancy typically is cited as a primary disincentive factor, whether out of concern, fear or political ideology, an N.C. State University researcher is raising concerns about what she calls vaccine apathy.

Stacy Wood, a marketing professor at NCSU, co-authored a recent article published in the Journal of American Medical Association that analyzed consumer behavior as it contributes to vaccine apathy. The article was co-authored by Kevin Schulman, a clinical medical researcher at Stanford University.

The article also offers options for what the researchers called “the most effective messaging to motivate” those vaccine hesitant and vaccine apathetic.

“While vaccine anxiety is an important hurdle to overcome, the assumption that all segments of the population with low interest in vaccination are hesitant is a misconception,” Wood said.

The researchers defined vaccine hesitancy as “a mindful emotional/cognitive response to assessing the risks and benefits of vaccination.”

“For example, Black individuals or Native American individuals may make a deliberate choice to ‘wait and see’ about vaccines based on their experiences with systemic racism in health care.”

“Populations characterized by apathy have yet to make the psychological investment required to be described as hesitant,” Wood said.

Researchers cited as an example a February Pew survey of 10,121 people that found 30% indicated they probably or definitely will not be vaccinated. Of that total, 42% listed “Don’t think I need it” as a major reason for their decision.

The researchers determined that vaccine apathy “exists across socioeconomic groups.”

“For example, adults younger than 25 years may perceive vaccination as a low-priority task given perceptions of a return to normal due to loosening COVID-19 restrictions. Whereas, middle-aged working-poor individuals may be overwhelmed by other higher-priority daily stressors, such as food insecurity or family responsibilities. “

Wood said the report “is extremely timely as the nation grapples with reaching herd immunity,” which may require at least 65% to 70% of the population either being vaccinated or recovering from COVID-19.

The goal with herd immunity is to shrink the number of individuals that COVID-19, or any serious virus, can be exposed to from a community spread perspective.

Getting the word out

The researchers said it has been appropriate to focus public health campaigns “on reaching persons anxious about vaccine safety, vaccine-related adverse effects, or both.”

“From a marketing perspective, disinterest in vaccination from some segments of the population is unsurprising and reflects typical innovation-adoption patterns in which half of the market is usually slow to make a choice.”

“This appears to be a description of the sizeable segment of the population that has not participated in public vaccination campaigns.”

Dr. David Priest, an infectious diseases expert with Novant Health Inc., has said public-health officials recognize it is pivotal to provide sound information to individuals who are vaccine hesitant.“

“We recognize there is a lot of bad information out there that makes the decision even more confusing,” Priest said.

“We still have big pockets in rural areas of individuals who are less inclined to be vaccinated. That’s an issue.

“We see that those who are affiliated with the Republican Party have been a little more hesitant to get vaccinated,” Priest said. “Unfortunately, things have gotten politicized around public health issues.”

The researchers said there are similarities between those who display vaccine apathy and political apathy.

“The size of vaccine-apathetic populations is difficult to determine for the same reasons that voting polls can be unreliable,” according to the report.

They said individuals may be “embarrassed to report indifference to preventive health care.”

“Given the media spotlight on vaccine hesitancy, some people may explain disinterest in terms of the vaccine — safety, method of development, efficacy — rather than in personal terms, such as lack of concern, health disinterest/fatalism.”

Researchers said they determine that who the messenger is may be as important, if not more, than the public-health message.

“Source characteristics can be more important than the evidence the source provides,” according to the report.

“Quick cues that indicate trustworthiness are important, such as similarity to the recipient’s in group or self-perceived community where membership confers a sense of identity, often based on race, religion, politics, professions, interests, lifestyles or smaller groups represented by an intersection of these factors,” the researchers said.

That’s why the researchers said vaccine apathetic individuals may be less likely to follow the advice of national public-health expert Dr. Anthony Fauci, and more likely celebrities and sports figures known for their own health and strength, or caring about others’ health.

Vaccine messaging must meet the vaccine apathy individuals “in everyday places, because low-involvement consumers are unlikely to go out of their way to look at or look for vaccine information,” the researchers said.

“Peripheral messages are intentionally limited in terms of data and should not encourage message processing.

“But, they can refer people to more detailed information elsewhere that is presented in a high-involvement manner.”

The researchers cautioned that being vaccine apathetic does not mean being anti-vaccine.

“People who are apathetic about vaccines may have weakly negative attitudes toward vaccines in general, but these attitudes are not strongly held and not highly defended attitudes that characterize people with antivaccine positions,” the researchers said.

Plus, anti-vaccine individuals tend to be highly engaged on the issue, though they “are avid consumers of (mis)information supporting their decision.”

Dr. John Sanders, section chief of infectious diseases at Wake Forest Baptist Health, said the report “demonstrates the value of a multidisciplinary approach to a problem.”

“This approach may help us understand why some of our patients (and our friends, family and neighbors) have not gotten vaccinated, and what sort of messaging we might use to encourage them to do so.

“Drs. Wood and Schulman have highlighted a great path for future research and public messaging aimed at the much larger segment of the population with vaccine apathy,” Sanders said.

The 70-year-old man faces a minimum fine of $2,000 after being charged with negligent hunting, taking a wild animal and hunting during the closed season.

More restaurants and bars have reopened and demand is up for spirits.

The woman was shot in Erwin, a town about 42 miles south of Raleigh. She was taken to a Fayetteville hospital in critical condition.

To our eyes, the moon appears to “wobble” in space because of its tilt, velocity and shape of its orbit, taking 18.6 years to complete. Half of the cycle suppresses tide activity by making high tides lower than normal and low tides higher than normal. But the other half exacerbates them — and therein lies the problem.

A video posted Saturday to TikTok shows a deputy in Burke County holding a man with the crook of his elbow pressed against the man’s neck. The man appears to go limp and the deputy lowers him to the ground before the recording ends.

The state Senate has placed the so-called Gerald Hege bill on its floor calendar for a session scheduled to begin at noon Thursday.

N.C. House gets that much closer to approving a budget

The state legislature's budget summer will take the next step in August, when the House releases its spending and tax proposal.

Warren Lee Raymond Sr., 64, pleaded guilty on Monday to two counts of second-degree murder in the deaths of his wife and son.

Syringes of COVID-19 vaccine sit at the ready for a June 17 clinic at the Davidson County Health Department in Lexington. Researches say “vaccine apathy” may be playing a role in why people aren’t getting a COVID-19 shot.

Badges and stickers were given out to people who got their COVID-19 vaccination June 17 at the Davidson County Health Department in Lexington. A February Pew survey of 10,121 people that found 30% indicated they probably or definitely will not be vaccinated. Of that total, 42% listed “Don’t think I need it” as a major reason for their decision.