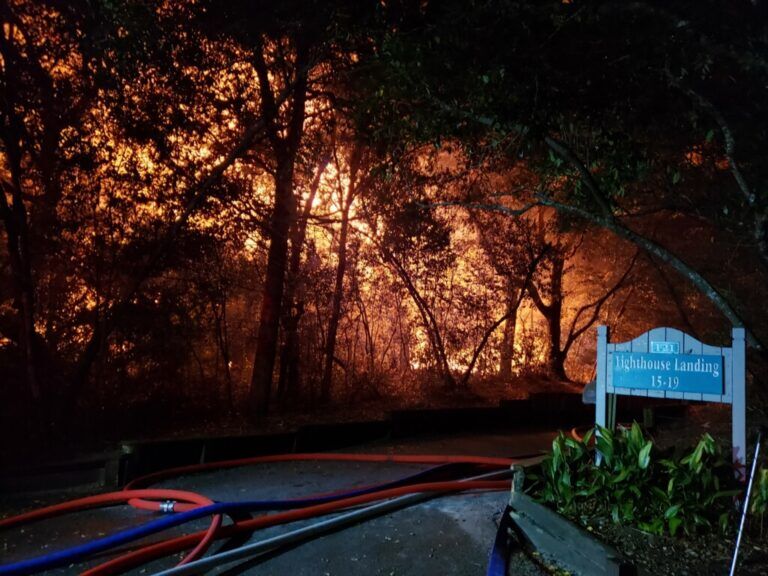 Multiple homes were destroyed in this fire on Bald Head Island on Saturday night. 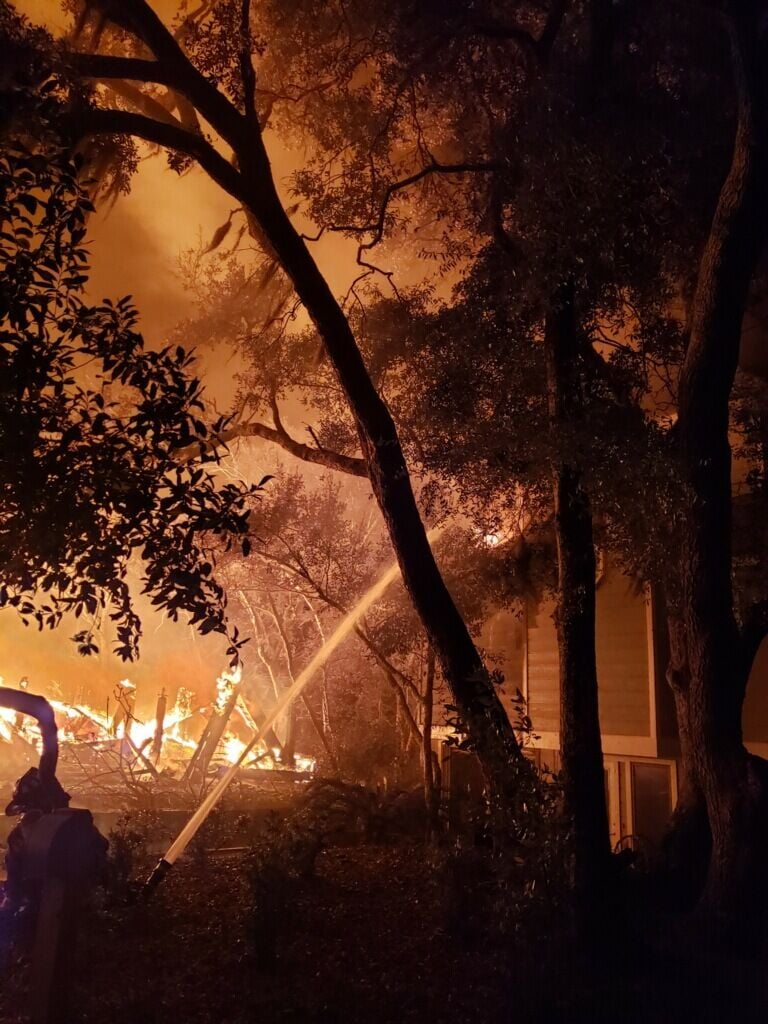 Roads were wet from firefighters' efforts to contain the damage and smoke still filled the air, hours after the fire was under control.

According to a news release from the Village of Bald Head Island Sunday morning, the Bald Head Island Department of Public Safety was dispatched just before 8 p.m. to Lighthouse Landing. A strong wind caused the fire to spread quickly.

At least five homes were “fully involved” as of Saturday night, the Southport Fire Department, which also responded to the scene, wrote on Facebook. The department said it had 14 firefighters on the scene.

Joan Baumer, a fractional owner at the Marsh Harbour Inn, was having dinner with her friends when she heard about the fire. She said the windy conditions made everything more frightening.

"It's sad and it's terrible," Baumer said. "It caused me to think, 'Hey we've all got to be careful, safety first.' We all feel that we're in paradise, but anything can happen."

When firefighters arrived two houses were fully engulfed in flames, said Alan May, public safety director for the Village of Bald Head Island. Another two on the side got exposures from the flames and the embers. There were also embers going over to the golf course.

Shelly Rydell was staying on the island for the week and was less than a mile away. After hearing the sirens and being contacted by friends, she walked down the street to see what was going on.

"The sky was just orange," Rydell said. "I couldn't believe how tall it was and how the embers were just blowing overhead. I worried that everything south of here was going to catch on fire because there were so many embers in the sky and the wind was just blowing like crazy."

For resident Jim Brewer, it was a terrifying experience. With embers spreading, he grabbed a water hose and to try and prevent further damage.

"I was putting water on our roof because of the embers and how dry it was," Brewer said. "I was soaking my roof and my neighbors roof just to make sure it didn't catch on fire."

Scott Russell heard sirens and didn't think much of it at first until he woke up to texts with people concerned about his safety.

"It hit pretty close to home," Russell said. "With all the woods here, it could have spread quickly. Thanks to all the volunteers and firemen who risked their lives to at least contain it where it was."

There were no deaths caused by the fire. One house was occupied at the time, but the people inside were able to get out before firefighters arrived, according to May.

"And that's a good thing, considering what these buildings looked like," May said.

May said four firefighters had minor injuries, including one who had a satellite dish from a house fall on him.

"The Village wishes to thank all the area agencies who assisted in the efforts to suppress and contain this fire," the village wrote in the release.

Bald Head Island is off the coast of Southport, in southeastern North Carolina.

Study: Hurricanes will only get worse for North Carolina residents

This comes after 19 hurricanes have hit U.S. coastlines between 2010 and 2020, resulting in countless lives lost.

The former zookeeper, who's struggling with prostate cancer, was moved from Texas to the Butner Federal Medical Center.

The body of Keith Adams, 60, was found off a road in Cleveland County, authorities said.

The Port City got a shout out from "Saturday Night Live" on its latest episode.

The congressman recently announced he would run for the new 13th District, a seat many assumed N.C. House Speaker Tim Moore would seek.

Smith, a Northampton County resident, said she is confident she can win in the community where she grew up.

The Carolina Connector was conceived long before the current snarls at the nation's ports and warehouses.

'Our secret': Looking back, he thought priest was a friend. Not anymore.

The Catholic Church finds itself rocked again by yet another well-respected priest being accused of sexually abusing a minor.

Second small quake in a week rattles parts of Winston-Salem, the USGS reports

The U.S. Geological Survey confirmed a 2.3 magnitude earthquake occurred at 4:05 a.m. Wednesday near the area of Swaim Road.

Multiple homes were destroyed in this fire on Bald Head Island on Saturday night.